Our guess is most people have probably never heard of South Carolina’s Congaree National Park, and that’s too bad. Or, that’s too good, if you want to experience nature without the crowds. Congaree is one of the newer parks in the system that was first protected as a national monument in 1976 and elevated to national park status in 2003. The park protects the largest stand (26,000 acres) of old-growth bottomland hardwood forest in the eastern United States. The park film in the Visitor Center focuses on the “champion trees” in the area that hold records for height. Sweetgums, tupelos, live oaks and loblolly pines abound, with one reaching nearly 170 feet.

Winter rains flood the forest and turn it into one huge river as Cedar Creek, the Congaree River and the Wateree River overflow their banks, causing the boardwalks to disappear under water. Although park materials suggest that the best way to enjoy Congaree is by canoe or kayak, the timing of our visit in early spring after the waters had receded meant that Cedar Creek was too shallow and full of sticks and branches for us to get out on the water with our inflatable kayaks. We talked to a few canoers who had muddled through but had to portage several times, so we decided to spend our time on foot instead.

We took the Bluff Trail that led directly from our campground and joined an elevated boardwalk near the Visitor Center. We thought all the trees looked pretty standard and wondered why the park materials go on and on about champion trees. But as we went farther into the swamp, the giants came into view. Some of them towered up to the sky and made us feel like Lilliputians. 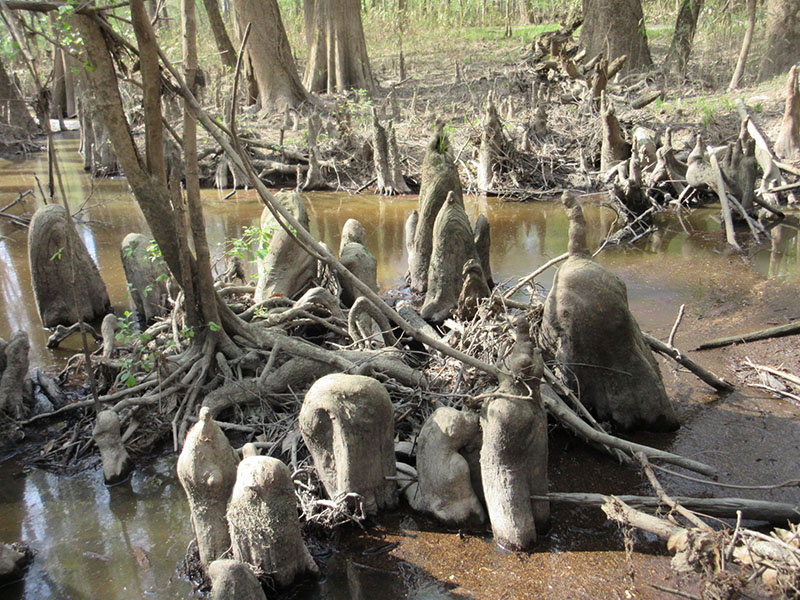 When combined with all the knobby cypress “knees” — the trees’ roots that grow up from the swampy forest floor — the scene felt other-worldly. Barred owls and several species of woodpeckers called from the majestic trees.

The next day we had to pack up because, with bad weather in the forecast, we had only reserved one night in the campground. The predicted rain didn’t arrive, however, and we wanted to explore the park in more depth, yet there was no availability for a second night. So we decided to drive to nearby Columbia for a night and then return to Congaree the next day.

If it hadn’t been for a full campground, we never would have given the Palmetto State’s capital city a second thought. Much to our delight, however, we drove downtown and found free on-street parking a block away from a Saturday farmer’s market that had sprouted up on the historic Main Street. Hector tried the South Carolina-style barbecue, which incorporates a mustard-based sauce, and we bought some boiled peanuts and crusty bread from a local baker. We sat for a time just people-watching and listening to an array of street musicians. Not knowing anything about the city — beyond the fact that they continued to fly the Confederate flag at the State House until 2015 — I was surprised by the diversity of the crowd and how vibrant the downtown area seemed to be.

We strolled up to the capitol building to check it out. Inside the building was less ornate, yet at the same time more colorful, than the Texas capitol in Austin. The grounds were prettier as well, with flowers in bloom and numerous monuments dotted here and there.

Although not a complete counterbalance to the Confederate Monument that fronts the capitol on Gervais Street, the African-American History Monument off to the west side of the building at least acknowledges the state’s history of slavery and the struggles of African-Americans since then for freedom, equality and civil rights.

The next morning we awoke to gray skies and mist but were eager to get back to Congaree. Luckily, our campsite from Friday night at the Longleaf Campground was now unoccupied once again, so we set up where we were before. 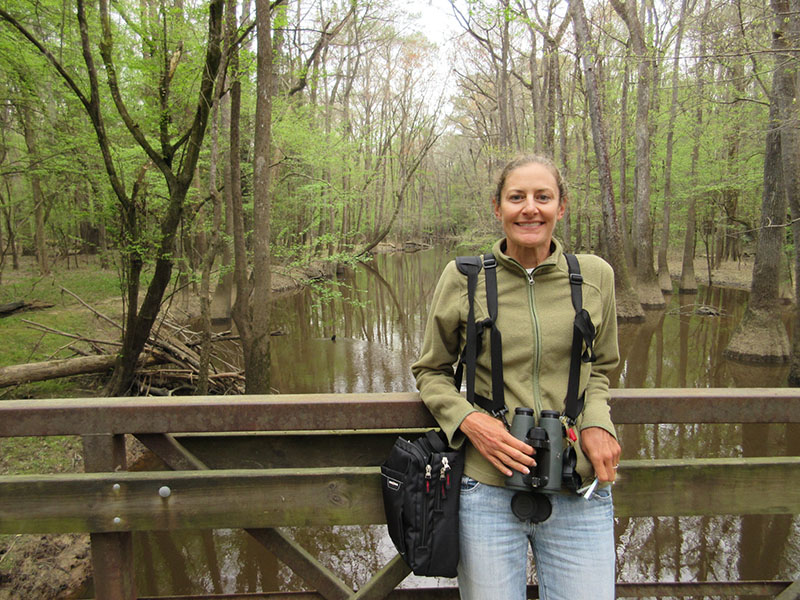 At the recommendation of one of the rangers, we drove to the Cedar Creek canoe launch to hike the out-and-back Kingsnake Trail through tranquil floodplain forest. Once again, the deeper we went into the forest, the taller the trees seemed to get. Some of these giants had toppled over, taking out smaller trees with them and opening the canopy to allow more sunlight into the forest. We also noted several areas where feral hogs had rooted in the mud and hoped we wouldn’t surprise any of these tusked beasts along the trail. Thankfully we saw no hogs, and in fact we saw only one other hiker, which we found unusual for a Sunday and for a park that’s only a 30-minute drive from a major city. It was just us and the birds.

We found Congaree to be yet another one of the National Park Service’s lesser-known jewels that offers a few tranquil days of respite and rejuvenation. Get there before the secret gets out!

13 thoughts on “Hugging the Trees at Congaree”