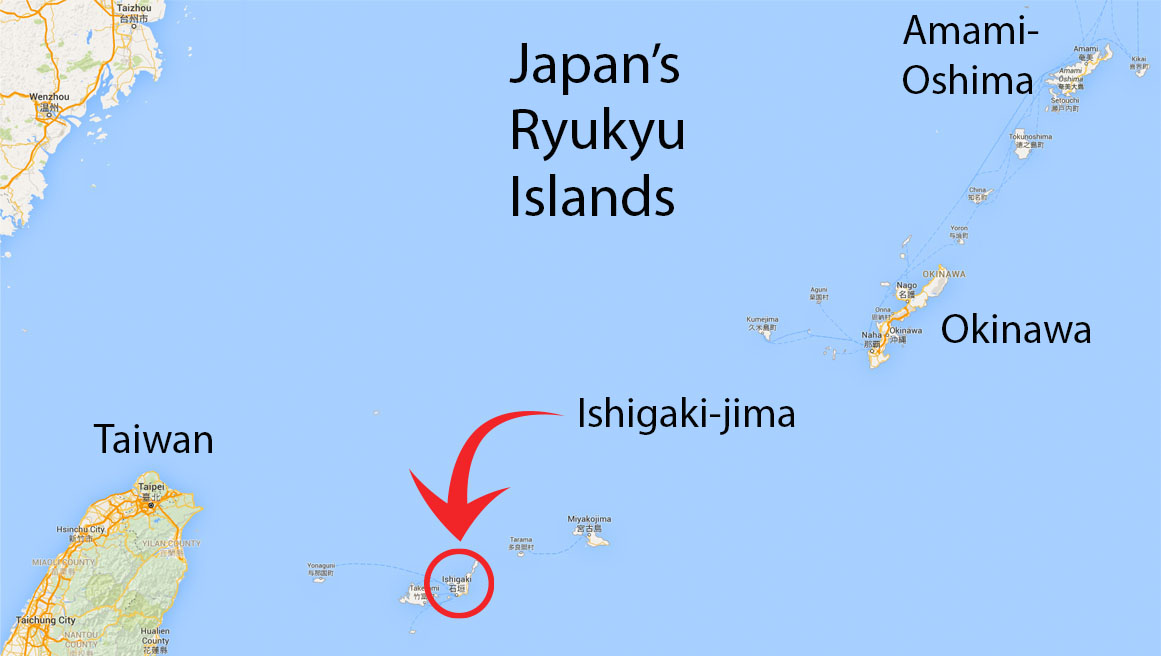 We flew to Ishigaki-jima in the far southwest of the Ryukyu Islands very near Taiwan, and the Chinese influence is quite evident. The inhabited coastal areas of the island were full of boxy buildings with peeling paint, bland white tile and moldy concrete, and yards were weedy and less manicured. Even the town park near the harbor looked like it hadn’t seen a lawnmower in months, and trash on the streets and sidewalks was common. The setting was warm, humid and tropical, though, which perhaps explained why it lacked the tidiness of the rest of Japan far to the north. In my experience, tropical places are just not as tidy as colder climes. One theory put forth (by the Swedes, anyway) is that people who live in cold places need to keep busy to stay warm. When it’s hot and sticky outside no one feels like doing yard work or picking up trash, and paint doesn’t dry, so why bother.

The cuisine of the Ryukyus is also different, with strange dishes like squid ink soup that turns your teeth black, and another soup called asa, which we referred to as “low tide soup” because of how it looked and smelled. Happily, it tasted better than I imagined it would. Read about these and other dishes in the Okinawa Island Guide.

Skipping in the Mud

Speaking of low tide, we spent some time in the mangrove areas at low tide, and one mudflat appeared to be shimmering in the distance. Upon closer inspection, it was teeming with little crabs coming out of their sand burrows all at once, each of them poking out the big claw first before leaping to the surface. We also found lots of mudskippers, the so-called “walking fish” for their habit of spending more time out of the water than in it. Believe it or not, these cute little creatures can drown if held underwater. They need to poke their heads above the water’s surface to breathe air like we do. I loved watching them fling themselves forward in the mud. I was also fascinated by the variety of hermit crabs that teetered along the sand until they sensed me approaching and froze instantly, tucking their bodies into their shells with the big claw forming a perfect seal to close up their “house.”

Out in the countryside we drove past fields of tobacco, pineapple, sugarcane and rice that had obviously had more time in the sun to grow taller than up north. Mercifully, the sun rose and set later here, much farther to the west, so dawn didn’t roll around quite so early. And by this time we had seen much of the avifauna Japan has to offer with only a few more specialties here, such as the Malayan night heron, cinnamon bittern, purple heron, whistling green pigeon and emerald dove. Thankfully our time spent in the field was not as exhausting as at the start of the trip. One unexpected bonus for me in Ishigaki-jima was the profusion of butterflies and dragonflies. The quantity and variety astounded me, and I found them almost more interesting than the birds, even though they were much harder to follow with binoculars.