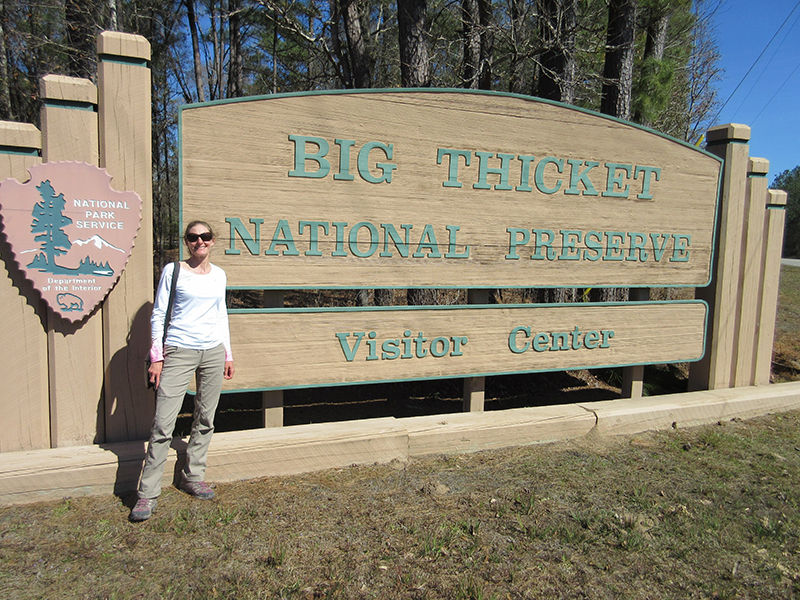 From the historic town of Natchez, we crossed the Mississippi River, cut across Louisiana and headed to southeast Texas to check out Big Thicket National Preserve. Rather than being in one contiguous area, Big Thicket is a series of nine land-based and six water-based units covering nine different habitats ranging from pine uplands and savannahs to arid sandylands, estuarine wetlands and bottomland floodplains. My favorite habitat name is probably the “baygall” — an acid bog with root beer-colored water from rotting plants.

This being a globally important bird area, we figured it would be a great place to add a few species to our lists. We missed half a day due to a storm that came in our first morning (rain = no birds), but in the afternoon it was clear enough for us to set off for the visitors center to get our bearings. The short film informed us about the preserve’s history, which included not just the native inhabitants but also the European-descended “dog people” (so-called because they all had dogs) who settled in the woods and lived off the land. Later, loggers arrived, followed by oil and gas interests. In an effort to protect at least a few remnant patches of the piney woods and other diverse habitats before they were all gone, “America’s first national preserve” was established. 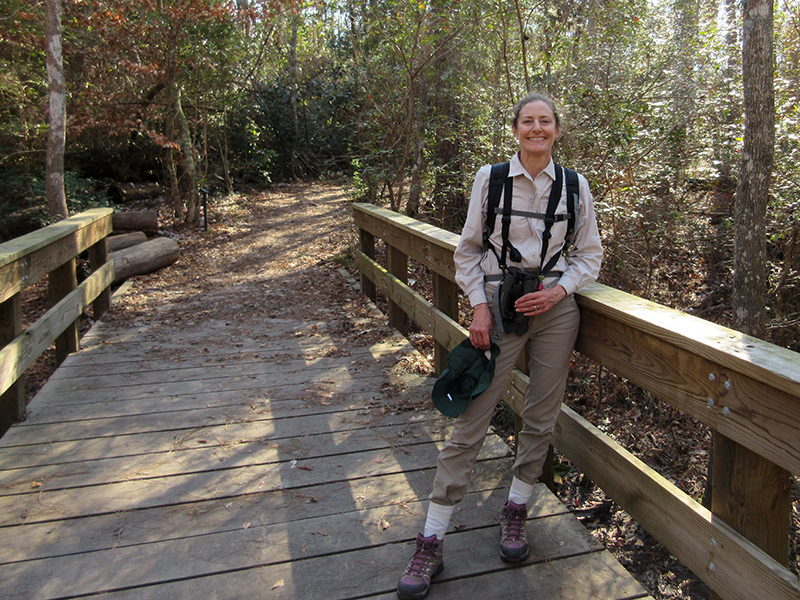 Binoculars in hand and insect repellent at the ready, we looped around the Kirby and Sand Hills trails over to Turkey Creek. It was a quiet, pleasant hike but we didn’t see many birds. We kept an eye out for alligators at swamps and creek crossings but turned up empty on that front as well. One ranger commented in the introductory video that appreciating the preserve requires an appreciation of the small things, and we found that to be true.

We walked through a stretch of forest with still-smoldering, blackened ground where they had just conducted a controlled burn to allow stands of tall pine trees to flourish. Tiny movements on the ground caught my eye and we stopped to observe a leaf-cutter ant colony that was a hubbub of activity. Some workers were hauling grains of sand out of the mound while others were headed in with unbelievably heavy-looking loads of leaves, short pine needles and other bits of detritus. The line of mobilized ants stretched for at least 40 paces, and I considered myself satisfied with this wildlife encounter on a smaller scale despite the relative lack of birds.

The next morning we drove northwest to the Big Sandy Creek Unit to hike the Beaver Slide Trail but were dismayed to find a sign at the trailhead warning hikers to wear orange safety vests because it was still hunting season. We were dressed in our beige and olive-green birding outfits to blend in with the scenery in hopes of seeing birds. But in hopes of not being mistaken as a deer by hunters, we decided to forget about the birds and talked loudly as we completed the short loop. 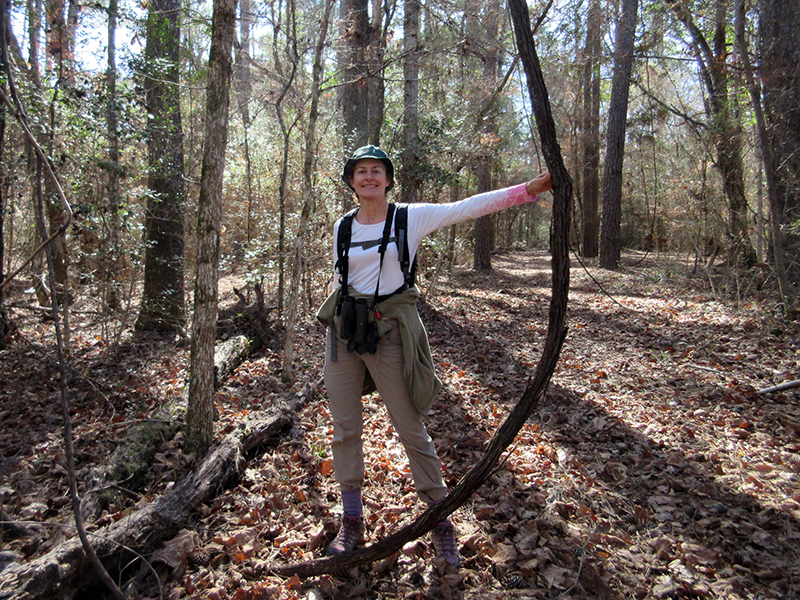 We needed a longer spell of exercise and so drove on to hike the Woodlands Trail. It ended up being a delightful walk through hardwood floodplains, swamps, and a beautiful mixed forest of beech, magnolia, bamboo and loblolly pines with the Big Sandy Creek running through it. Here, too, we kept an eye out for alligators but only saw a few deer and squirrels. However, Hector finally got a glimpse in these woods of the big pileated woodpecker, which he missed at our Natchez Trace campground and didn’t believe existed.

The woodpecker that is much more mythical is the even larger ivory-billed woodpecker. Back in 1966 there were reported ivory-bill sightings in Big Thicket, and then in 2004 several people claimed to have seen them in Arkansas, decades after it had been thought extinct. The Cornell Lab of Ornithology and other entities sponsored expeditions over the course of five years to try to find the elusive species in Arkansas, Louisiana, and Florida. For the most part these teams produced no definitive evidence of the bird’s existence.

After our hike when we returned to the visitors center for a picnic lunch, I asked the ranger if a lot of people come in asking about the ivory-bill. “No,” he stated flatly, “because it’s extinct.” But he did tell me that people come in more regularly inquiring about or claiming to have seen Bigfoot.

“Have you ever heard a 200-pound wild hog screaming and crashing heavily through vegetation? That’s your Bigfoot,” he said. Apparently some enterprising people have even tried to run Bigfoot tours in the preserve, which the Park Service has quickly put the kibosh on. 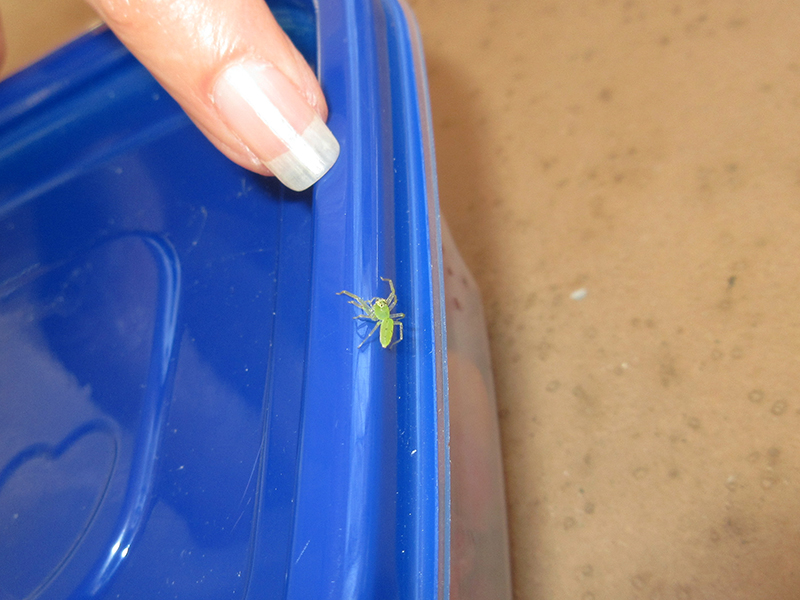 Back to appreciating the small things in Big Thicket, our picnic table had dozens of what I think were magnolia green jumping spiders. One could easily overlook them as aphids. You can see just how tiny they were next to my pinkie finger.

After lunch it was time to move on. We wanted to spend more time exploring some of the other Big Thicket units, especially by kayak. But we had a chance to paddle around in the swamps at our next destination — Louisiana Cajun Country. That post is coming up soon.

8 thoughts on “Bigfoot in Big Thicket?”