We made Nickerson State Park our base for exploring Cape Cod National Seashore. Thank goodness we had booked a yurt for our camping trip instead of toughing it out in the tent, because it rained heavily for several hours upon arrival at what, in better weather, could have been a delightful park. Once the rain eased up, we took a brief walk along the forested campground trails to check out some of the park’s “kettle ponds.” Similar to those in Cape Cod, these kettle ponds formed when Ice Age glaciers melted and left depressions filled with freshwater. We looked forward to kayaking on the largest, Cliff Pond, and crossed our fingers for better weather the next day. 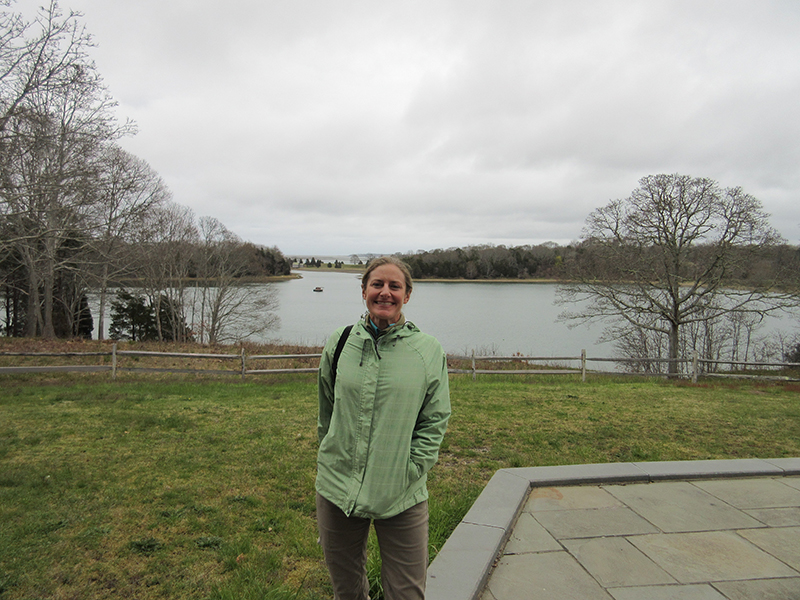 No such luck. With gray skies in the morning, we opted to start at the Salt Pond Visitor Center at the southern end of the national park to learn about the area’s history from two films and nicely done interpretive displays. Originally inhabited by Wampanoags, the land provided a bounty of fish, shellfish and cranberries — along with the standard corn, beans and squash — that European settler took advantage of once they had largely wiped out the native tribes through disease, war and enslavement.

The rain was just light enough for us to hike in the Coast Guard Beach section of the park. A sign warning about ticks in the area made us a little nervous, but we followed the trail through the woods and into the salt marsh and looped back around by Doane Rock. 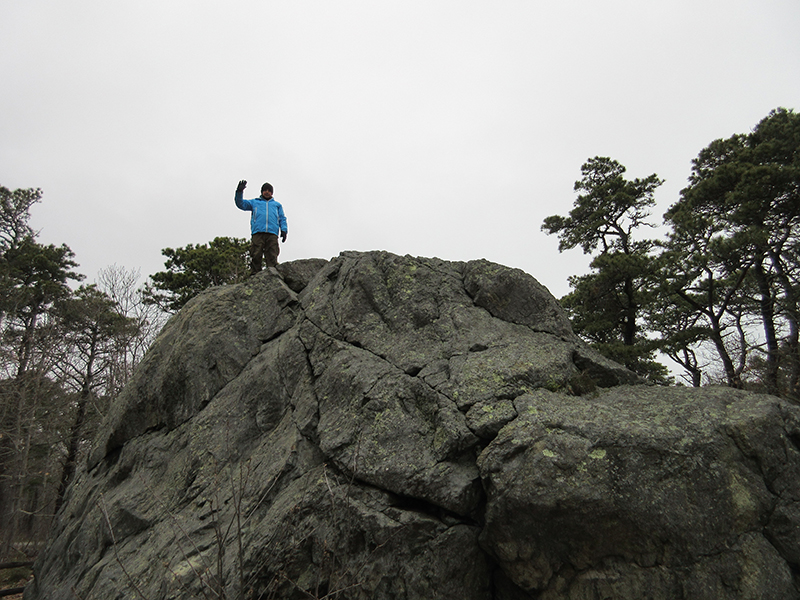 Deposited by glaciers more than 18,000 years ago, this immense rock is one of the largest ice-carried boulders in southeastern New England, standing 18 feet above ground and (scientists think) 12 feet below ground.

We continued on to the Nauset Lighthouse, which had been at Chatham some 30 miles away until it was moved here in 1923 to replace the so-called Three Sisters that had graced Nauset before then. (Fans of Cape Cod brand potato chips may recognize this iconic lighthouse from the bag design.)

Resembling three ladies in white dresses and black hats, the small, wooden Three Sisters now sit a third of a mile safely inland from the encroaching shoreline. We did not realize how common it is to relocate lighthouses, light keepers’ homes, Coast Guard cottages and many other structures in coastal areas. In some cases, sailing would be unsafe if we simply let lighthouses fall into the sea without moving them, and in other cases people feel the historic preservation value outweighs the expense and effort of moving buildings. 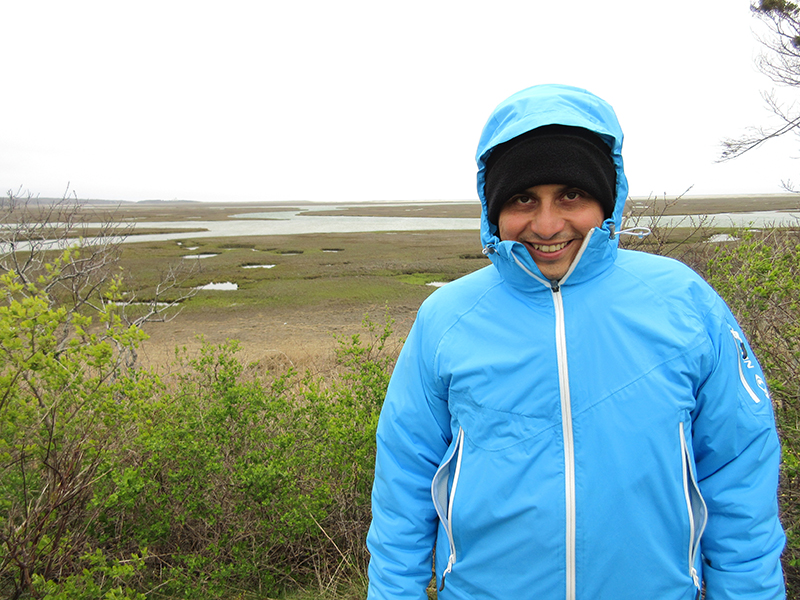 We then drove to the park’s Fort Hill area and hiked out to the salt marsh before the rain chased us into the car to eat our sandwiches. With no sign of blue skies and the temperature dropping, we headed back to the yurt for the afternoon. 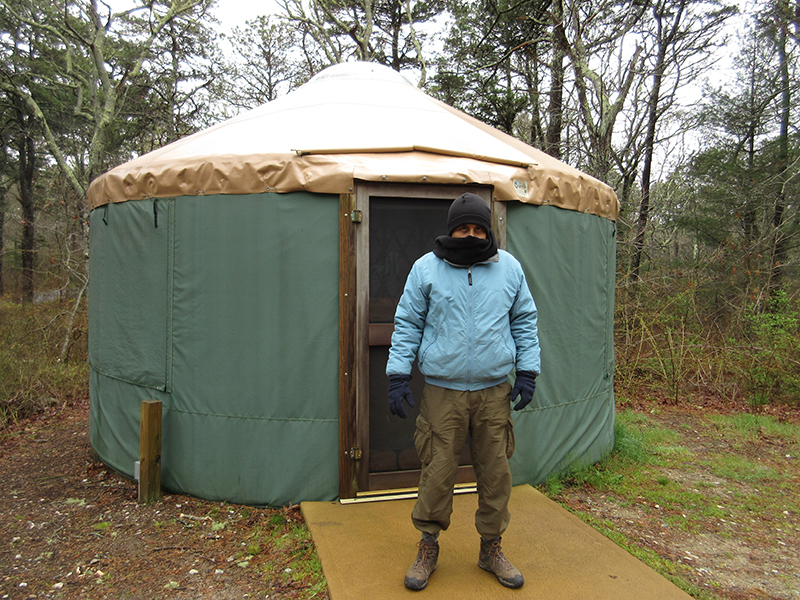 After a few hours it was even colder but we heard the rain tapering off, at which point Hector decided it was clear enough to go outside to heat up some canned soup for dinner (park rules strictly prohibit open flame in the yurts). Within minutes, however, the sky opened up and both Hector and the camp stove were drenched. He appeared at the yurt door, dripping wet and holding two open cans of cold soup and an expression of dismay. My tactless remark was, “Whose idea was it to have soup, anyway?” and his dismay turned to disgust at our sad situation. We ate the barely palatable soup in silence. 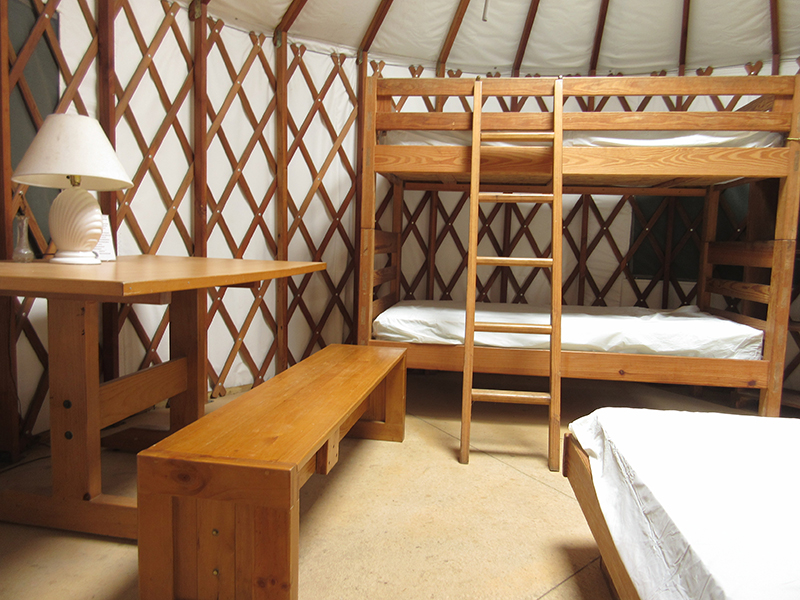 The next day it was still raining but we hated the idea of sitting inside all day, so we drove to the northern tip of the cape. This end of the park has another visitor center, where we watched a film on the U.S. Lifesaving Service and the heroic efforts of those who rescued shipwreck victims on this dangerous stretch of Cape Cod coast. Between these guys and the whalers we had learned about in New Bedford, it’s hard to say who faced bigger, more terrifying waves. Just watching the film made me shudder.

Bad weather, a bitingly cold wind and very limited visibility made hiking an unattractive option, so we headed for nearby Provincetown. Even on a rainy day in the off season, this quaint little seaside village seemed cramped and crowded with shops, restaurants and B&Bs — the kind of place that is being loved to death by tourists. We had no strong desire to get out and explore the town on foot. With no letup in the downpour, it was back to the yurt, where it rained solidly until midnight as we shivered under blankets. 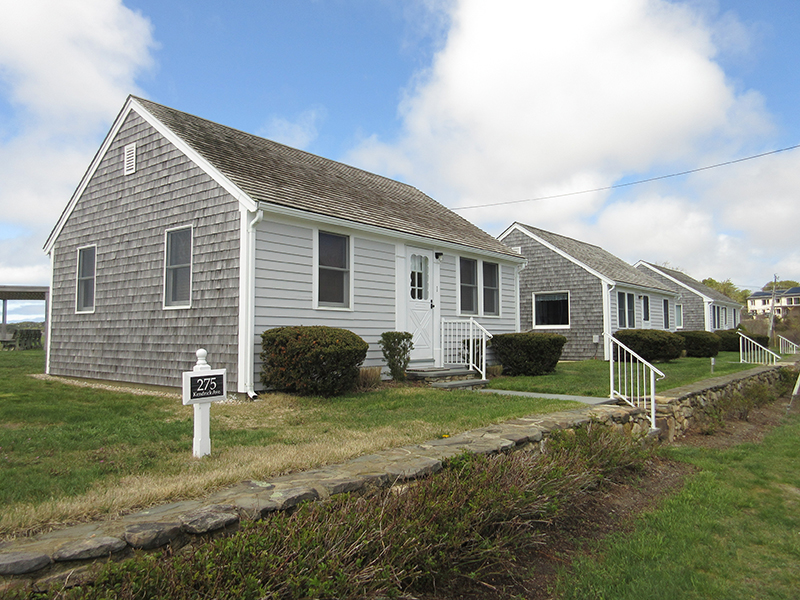 On our final day the air was still bitterly cold but at least the sun had come out as we checked out. Despite our deep disappointment at not being able to enjoy Nickerson with a hike or kayak outing, we drove north to Wellfleet to see Cape Cod in clearer weather. This tiny town is just as picturesque as Provincetown but with better views of the water and far fewer people. Many cottages sport the Cape Cod look, clad in white cedar shakes that age to a silvery gray, although quite often we saw homes that had either only the front or the sides painted. (Attention architectural and/or design buffs: please comment below if you know why some homes are only partially painted.) 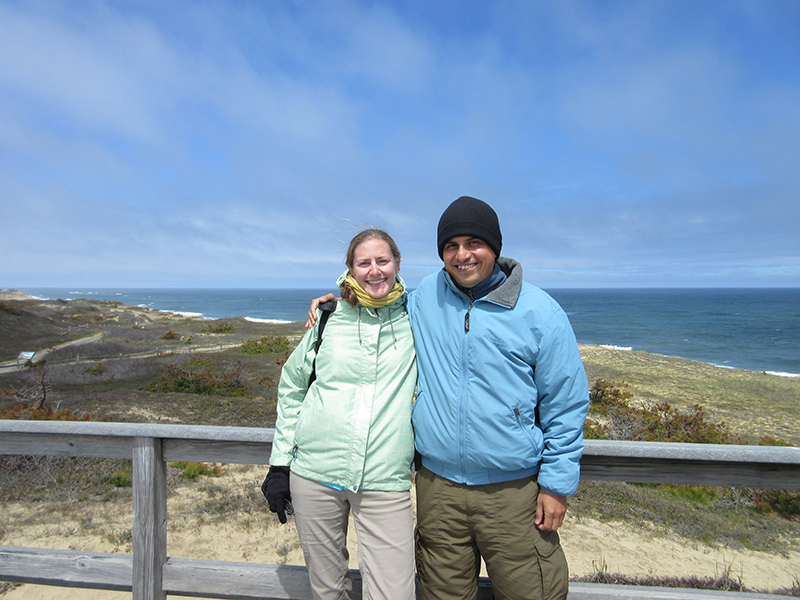 Nearby was a wonderful short hike that a park ranger had recommended a few days before. The Atlantic White Cedar Swamp Trail started out as an average walk in the woods, but once we reached the boardwalk through the swamp it became a magical place. This freshwater kettle pond is a fascinating micro-habitat in which green mounds of understory plants like sweet pepperbush, inkberry and sheep laurel poke up from tea-colored water like forested islands in miniature.

If it hadn’t been for the tall white cedar trees, we might have thought we were giants in a Lilliputian world. We were now grateful for the chilly temperatures of late spring because we could see how this rich, moist landscape could be a bug-ridden nightmare in summer. We found it an altogether enchanting little patch of forest, and our time in Cape Cod ended on a high note.

11 thoughts on “Trying to Cope in Cape Cod”