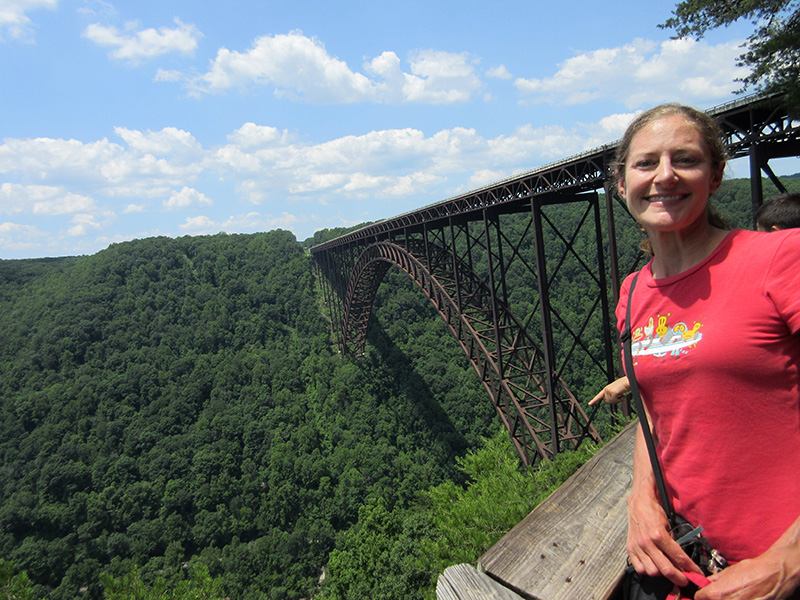 Happily, once again the sun came out after the overnight showers, allowing us to pack up dry gear. We had one more area to check out before leaving West Virginia, and it was the New River Gorge itself. An 867-foot-tall bridge that spans the gorge near Fayetteville is the main attraction for most visitors, who huff and puff coming up the step from the bridge lookout point. Not being content with that as our workout for the day, we drove to the nearby trailhead for the Endless Wall Trail. 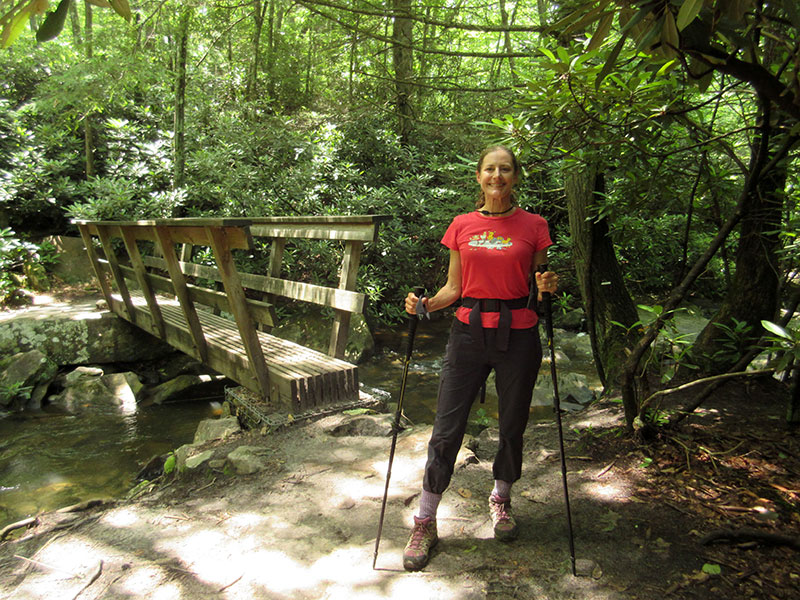 The path circled through a cool and shady hemlock forest, which is threatened by the woolly adelgid, an invasive pest from Japan whose telltale signs include cottony egg sacs at the base of the hemlock needles. Here and in other parks on our journey, we read about hemlock forests throughout the eastern United States suffering from this tiny pest, leaving park and forest managers scrambling to eradicate the woolly adelgid before it wipes out the hemlocks. These long-lived trees often make up a large percentage of forests in Appalachia and beyond, so it would be a shame to lose these mighty timbers.

The lush, dense forest gave way to a more open canopy and a series of overlooks high above the New River. We sat for some time on a clifftop at Diamond Point, watching the kayakers and rafters making their way through the rapids down below. Rock climbers also flock to the Endless Wall, using ropes strung to the trees on the cliff. The gorge is breathtakingly beautiful, and we had to pull ourselves away to finish the loop hike and continue on our way. 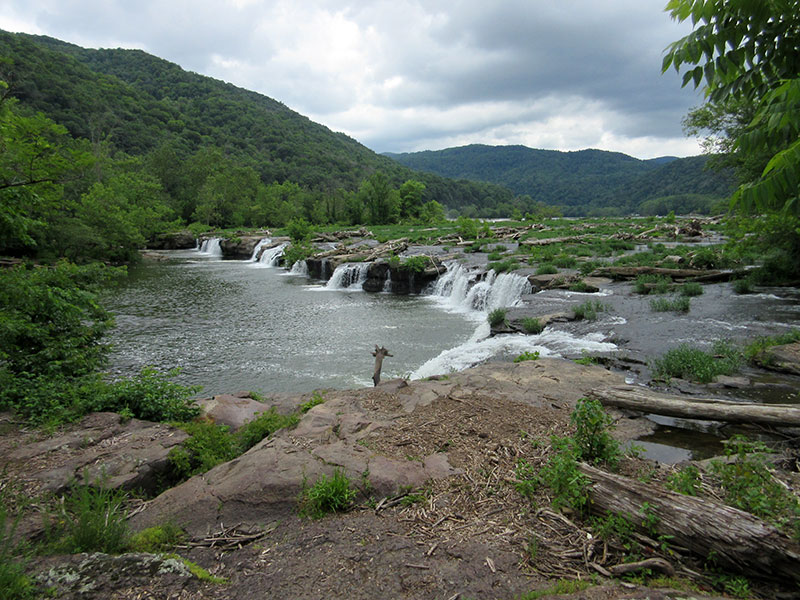 How to sum up this part of West Virginia? With apologies to the locals, I would have to call it simultaneously skanky and sublime. Trash is strewn about, even in the parks, and many towns are in varying stages of disrepair. Mining operations along the rivers mar the landscape and made us wonder about water and soil quality in the area. 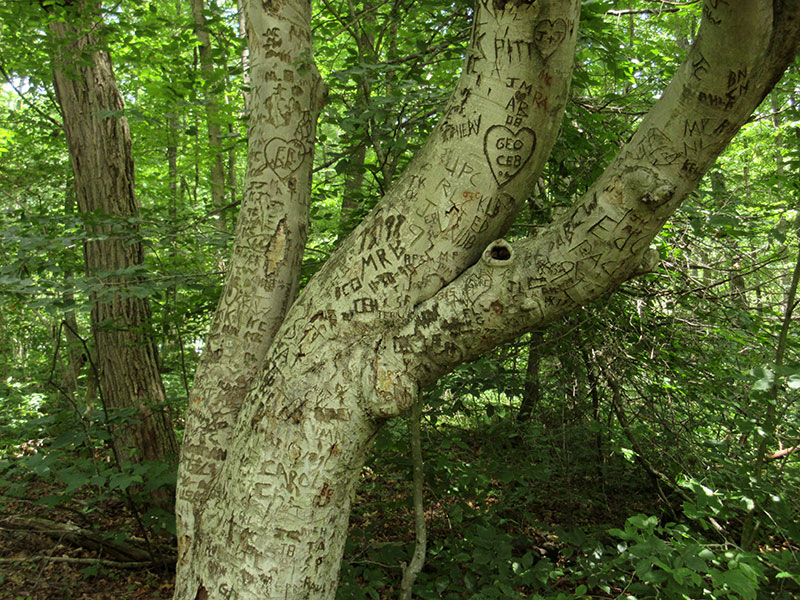 We saw many signs, like graffiti-carved trees, that hinted at a lack of respect for nature. Rusty, dilapidated trailers and campers, most with No Trespassing signs posted nearby, line the back roads. This seemed to bear out the reputation folks in Appalachia have for being suspicious of strangers.

And yet our camping neighbors did gradually warm up to us. In fact, by the time we packed up to leave after five nights at Bluestone State Park, they were downright chatty. Perhaps it took them a few days to get used to seeing us around. Perhaps they took pity on us as they sat in their RVs and we toughed it out in our tent in the heavy rain. Perhaps we had proven that we could handle the wilds of West Virginia. 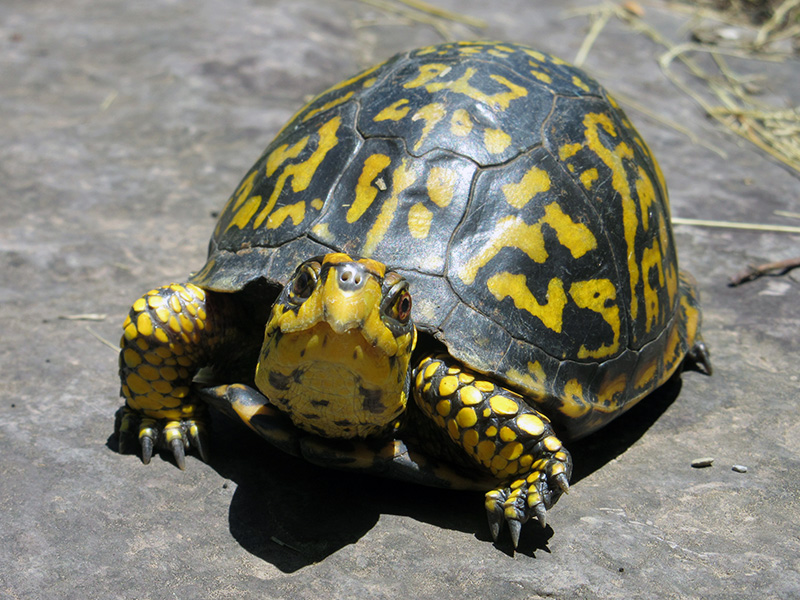 And when it comes to nature, at least in mid-June during our visit, the wildlife was some of the most plentiful we’ve seen. Mammals, birds, fish, reptiles and amphibians seemed to greet us at every corner. In all, this turned out to be one of our best camping experiences so far.

One thought on “Wrapping up West Virginia”