In a country like Ireland — which has nearly 2,000 miles of stunning coastline, roads that twist and turn their way through green hills that sweep down to the sea, and one adorable hamlet after another — it’s hard to single out one favorite corner. But if I had to choose one place for its overall sigh-inducing atmosphere (even on rainy days), it would probably be the Dingle Peninsula in southwest Ireland’s County Kerry. Much of the Peninsula is yet another Gaeltacht region, evident from Irish-language signage and broadcasting.

On our way from Galway down to Dingle, we opted for the scenic R560 route, a winding, one-lane road that took us up and over the 1,500-foot-high Conor Pass. It’s one of Ireland’s highest paved mountain roads that only fearless drivers should attempt, and only on a clear day. Thank goodness we could see oncoming traffic descending from above as we climbed steeply and used the occasional pull-outs to wait for cars to pass. A low roadside stone wall provides only minimal peace of mind; I doubt that it could keep a veering car from sailing off into the valley below. Cresting the pass, powerful gusts of wind rocked the car back and forth and made us feel like we were on a ship at sea. Amazingly, a few bicyclists started from the top and rode down the pass’ south side and several more cyclists huffed and puffed their way uphill. We would later meet some of these insane folks.

We checked into our B&B in colorful Dingle Town on a quiet stretch of road where Main Street becomes John Street, then went for a stroll through the quaint blocks of the town center. We arrived at Murphy’s Pub in time to grab a meal before the session started in the back room. As at Gogarty’s in Dublin, not a local was to be found except for the bar staff and musicians (guitar and accordion), but this time the crowd was subdued and unenthusiastic. And that’s a shame because Dingle is another very musical town with some 30 or so pubs where local performers ply their trade. When the band took a break and the room became silent, we moved on to O’Flaherty’s Bar, where the owner himself is a multi-talented singer and musician. We got there just in time to order a pint and catch the last song of the night. As soon as the music ended the place emptied out, once again leaving us in relative silence. Time to call it a day.

The highlight of any trip to Dingle is motoring along Slea Head Drive, the coastal road that fringes the western tip of the Dingle Peninsula. We followed this scenic circuit clockwise, stopping first to check out the roadside clocháns, or beehive huts. These tiny round structures were built using the same drystone construction as found in walls and the Dún Aenghus hill fort on the island of Inishmore.

We moved on to Slea Head, where we parked and walked down a steep little road to a tiny beach, then took the clifftop path to the western edge of Ireland’s human habitation, with views of the now-abandoned Blasket Islands in the Atlantic Ocean. Beyond the Blaskets, west of here the next landfall is North America.

Up the road we stopped at the Great Blasket Centre to wait out the bad weather. This excellent museum has fascinating exhibits about bygone life on Great Blasket Island, which sits less than two miles across the water from mainland Ireland but was so harsh a place to scrape out a living that the few people who did live there finally left the island in 1953 due to a dwindling population that no longer made sense to sustain. Even before then, a great many Blasket Islanders emigrated to Springfield, Massachusetts. The museum also provided an in-depth look at Blasket’s Irish-language writers — surprisingly numerous for such a small population and perhaps spurred on by anthropologists and linguists who came to study the villagers in the late 19th and early 20th centuries — who related first-person tales of the traditional way of life and struggles of islanders.

The weather cleared a bit, so we continued our journey and went for a long hike through fields clad in pink flowers out to Clogher Head. Passing several curious cows, we followed the clifftop over to Clogher Strand and walked until the rain began again and we doubled back.

Farther along Slea Head Drive as it circled back east, we checked out the Gallarus Oratory. This tiny, 16-foot by 10-foot drystone structure reportedly is one of Ireland’s best preserved Medieval chapels, but experts have disagreed on its construction date and purpose. Nevertheless, its corbel vaulting and angled stones keep it upright and watertight, and it’s lovely to behold. 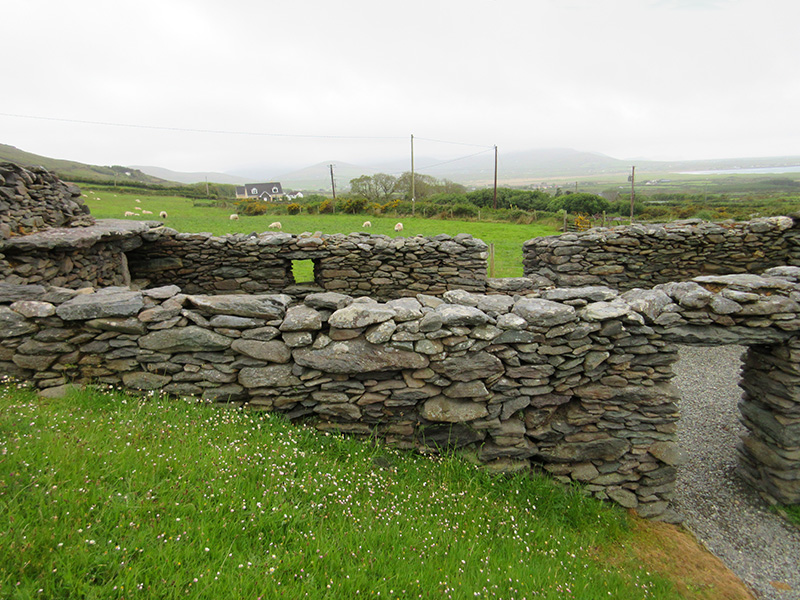 The final point of interest on our way back to Dingle was a ráth, or stone-age ringfort, dating back to 1000 B.C. Before archaeologists came along to decode the nature of these structures, some people referred to them as “fairy forts.” Stone and earth remnants of bygone days dot the Irish countryside like sheep and cozy cottages.

In the evening we explored more of Dingle Town and its pubs. Our first stop was the tiny O’Sullivan’s Court House Pub. Despite our early arrival it was so cramped that we had to sip our pints and listen to the music from a window seat tucked out of view of the band. We later moved up to another pub on Main Street that had plenty of open seating in the back room where an accordion and guitar duo were performing. They played numerous original ballads, some sung in Gaelic, which were the perfect antidote to the boisterous drinking songs that often predominate in Irish pubs catering to tourists.

The next morning our fellow breakfast companions included several Germans who told us they were heading up and over the Conor Pass on their onward journey. I mentioned that it was a challenging road to drive and asked them what kind of vehicle they had. When they responded, “Bicycles,” and my jaw dropped, they all broke out in a hearty laugh. They probably later told friends back home how they met a pair of American weaklings who thought one could only get around the Emerald Isle by car. There might indeed be some wisdom in driving a vehicle the width of a bicycle on such narrow roads, but Ireland’s ample rain and strong breezes warrant the shelter of a warm, dry car. No matter what the mode of transport, however, a road trip on the Dingle Peninsula is a singular experience for anyone wanting to soak up a little Irish history and scenery.

2 thoughts on “Singling Out Dingle”