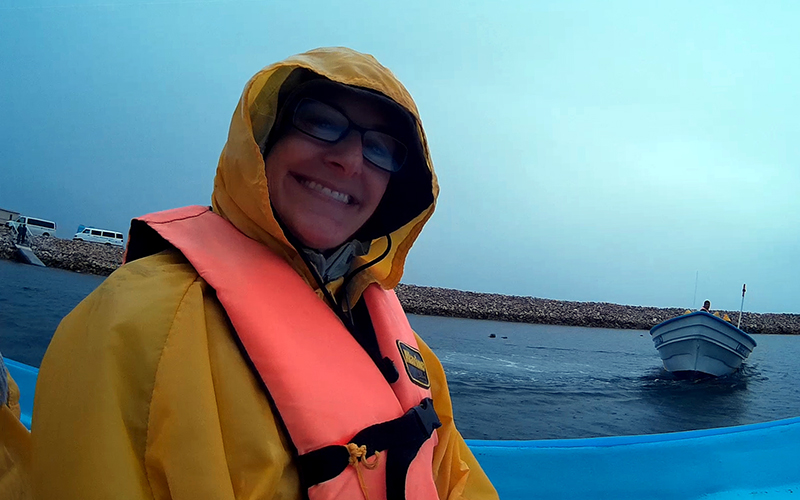 No trip to the Baja Peninsula would be complete without at least one whale-watching excursion, and we chose the small town of Guerrero Negro at the far northern end of the state of Baja California Sur for a boat trip in search of the massive marine mammals. Guerrero Negro sits near Laguna Ojo de Liebre, one of three primary gray whale wintering and birthing grounds in Mexico (the others are Laguna San Ignacio and Bahía Magdalena). The whales begin arriving here from their summer feeding grounds as far away as the Beaufort Sea north of Alaska in mid-December and stay until March or April. The town fills up during peak whale season in February, but with a good selection of hotels and having arrived early in the season, we found a reasonably priced room at the Hotel El Morro. The desk clerk there recommended Las Cazuelas for dinner, where I had one of the most delightful seafood dishes ever, mariscada a la Española. Off to a good start. 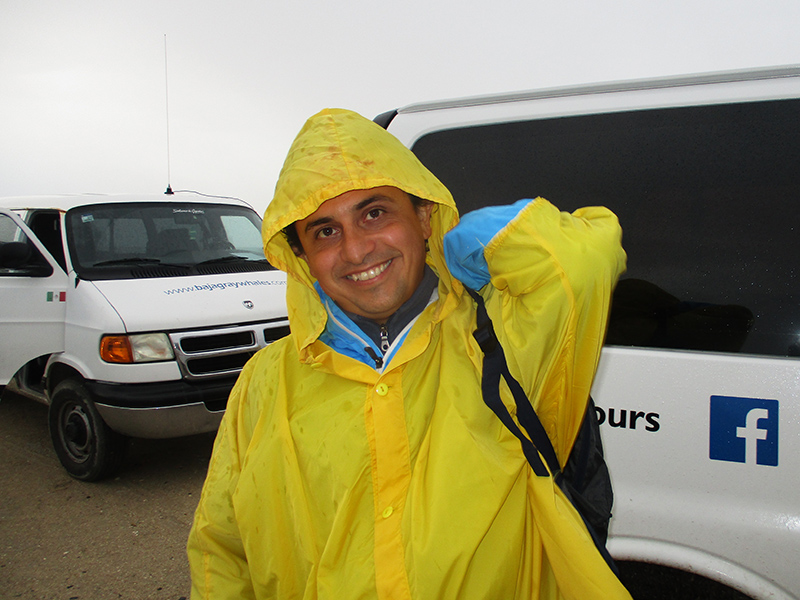 The next day had its challenges, however. We had signed up for the morning whale-watching tour from Mario’s Tours, and it began with a 30-minute orientation session about the gray whale. We learned that this species is black at birth but becomes encrusted with barnacles and other parasites that live on its skin, giving it a gray appearance as it ages. The coastal, shallow-water-loving whales enter a mile-wide gap into the Ojo de Liebre lagoon, the males arriving first. The females follow, giving birth to their young and remaining hidden in backwater channels for a month or two until they feel safe enough to appear with their calves in the larger lagoon, where tour boats are permitted to operate. Reproduction takes place here, too. Interestingly, each male needs a “wing man” to swim on the opposite side of a female to hold her steady while the lucky guy gets to mate; calves are born the following year. 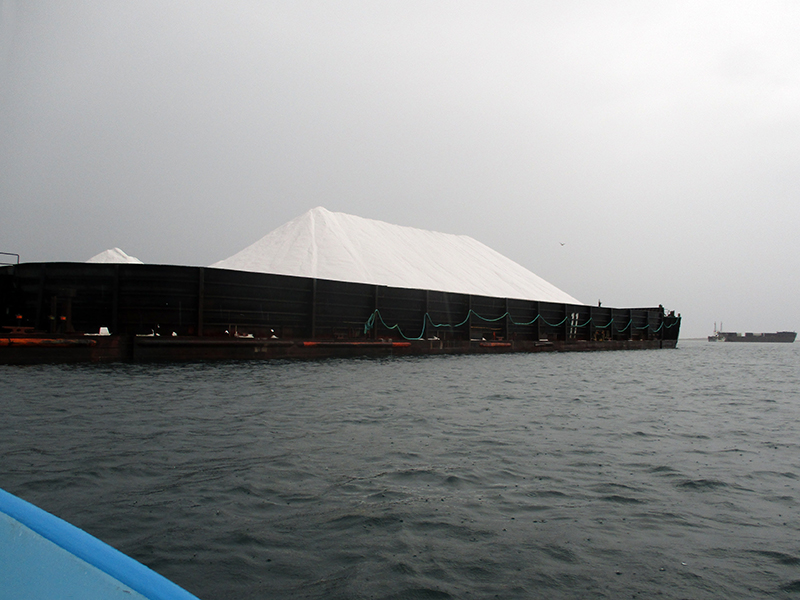 Our group set off in two vans for the 30-minute drive through town and into the salt works at the edge of the lagoon. The boat launch sits on the property of Exportadora de Sal, now a joint venture between the Mexican government and Japan’s Mitsubishi Corporation. The company existed before the Mexican government designated the larger Vizcaíno Biosphere Reserve — which includes the Ojo de Liebre and San Ignacio lagoons as marine protected areas — in 1988. As the world’s largest salt operation, the facility annually exports nearly 9 million metric tons of salt (the result of evaporating ocean water rather than mining). 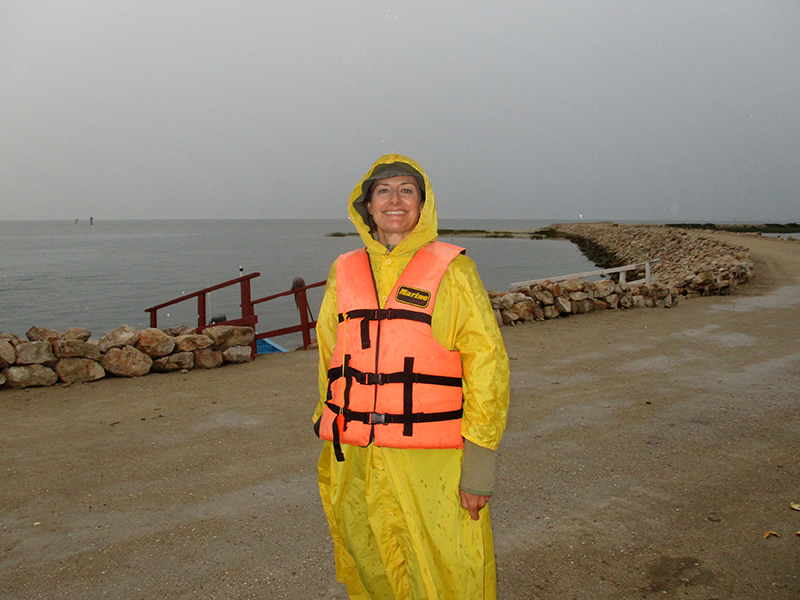 The forecast had called for light rain, mostly in the afternoon, but the wet weather arrived early and heavy at times. We donned life jackets over our tour-issued rain gear before boarding dinghies for the trip out to the mouth of the lagoon. Our rain gear quickly soaked through, and the choppy conditions from the wind and rain made for a bumpy ride. 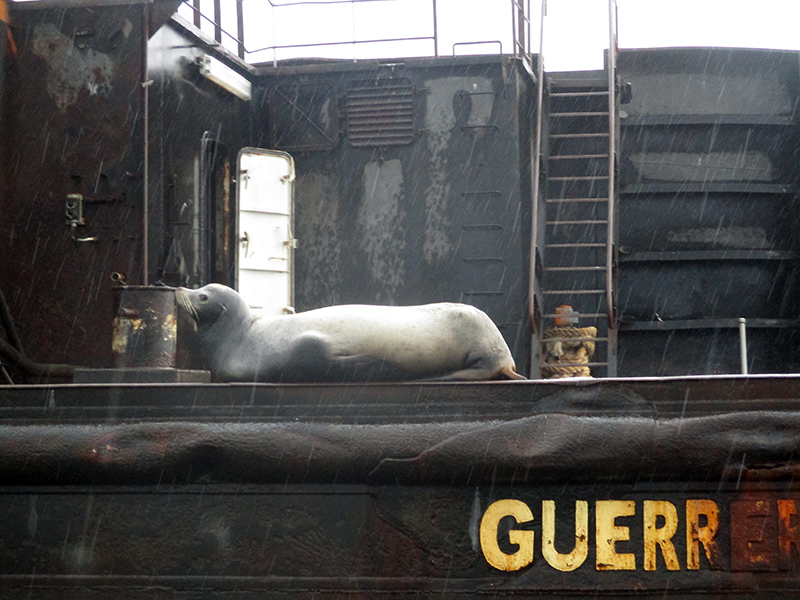 We saw a few dolphins and sea lions on the way, including some lazing about on the salt barges. A few glanced up to bark at us or one of their fellow sea lions, but many just ignored us as we motored past. 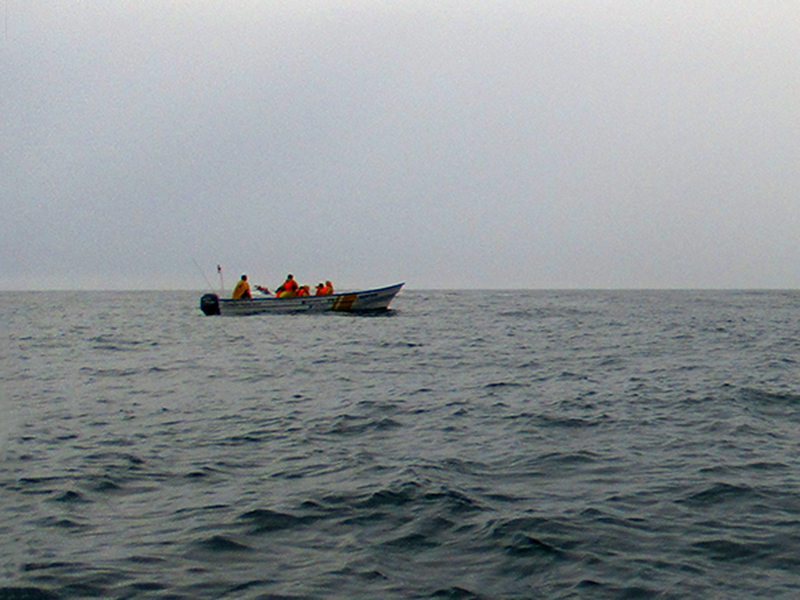 The wind chilled us to the bone as we circled near the mouth of the lagoon looking for whales. From time to time we would spot a whale spouting or barely surfacing but caught brief glimpses of only two or three tails emerging from the water. I tried to ignore my frozen feet and kept my eyes on the horizon line as much as possible to avoid feeling queasy in the heaving boat. About two hours into the trip, no one had much enthusiasm to stay out in the inclement weather, so our captains turned the boats around for the bone-jarring return to the dock with another squall rolling in. 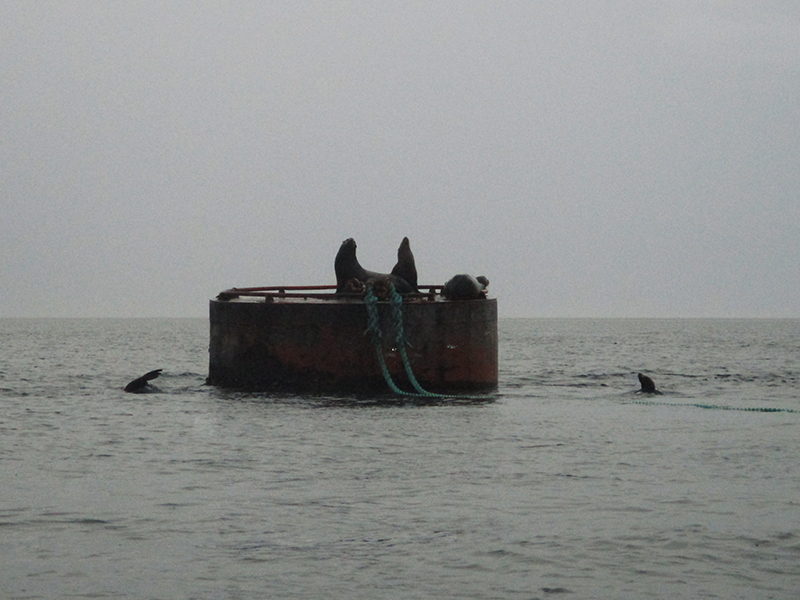 Whale activity clearly hadn’t yet ramped up this early in the season. A calm, sunny day in February probably yields more and better whale sightings, but, alas, we saw more gray skies than gray whales. Better luck next time.

One thought on “Seeking Gray Whales in Guerrero Negro”