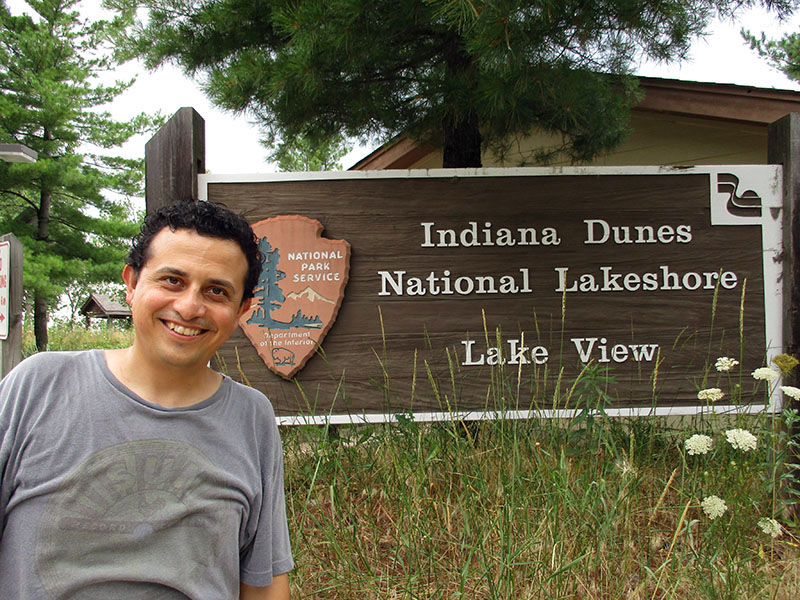 Indiana Dunes National Lakeshore, 55 miles east of Chicago and connected to it via the South Shore train, covers several parcels along the otherwise industrialized southern coast of Lake Michigan. We pulled into the Dunewood Campground across the road from the Beverly Shores train station and had our pick of sites mid-week. This ample campground sits in a nicely wooded patch of land about a mile inland from the lake. It’s one of the best National Park Service campgrounds we’ve come across, amenity-wise: a 50% discount for America the Beautiful passholders; free hot showers in private, lockable stalls; utility sinks with hot water for washing dishes; and large, level tent pads with food hangers. 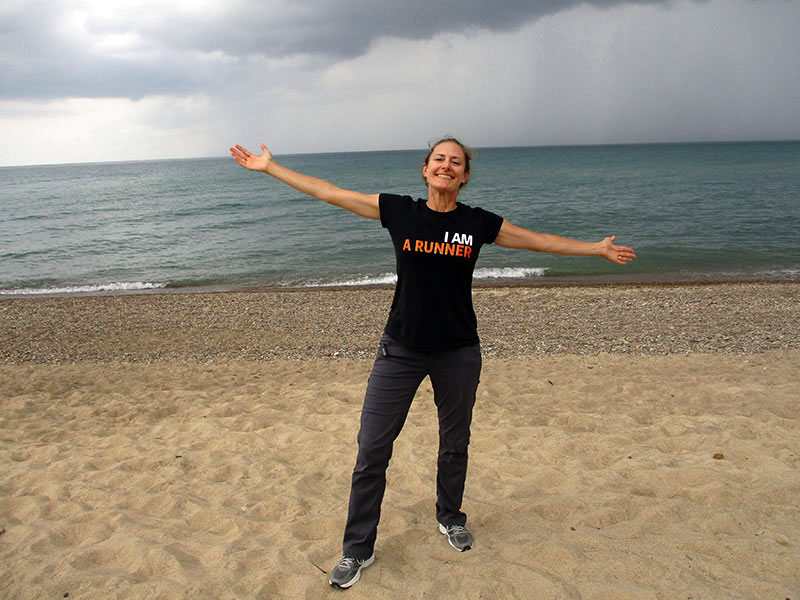 Rain threatened overhead but we figured we’d drive down to explore the lakeshore and get our bearings. The view fooled us into thinking we were at the ocean, and we sat on the beach for an hour or so watching the waves and lightning striking off in the distance. Later in the evening it did rain in camp, but we were grateful for the cooling effect it had. Here in mid-July, this is a rather steamy place to be.

We went to the Visitor Center the next morning to watch films on the park’s creation and natural treasures. The dunes formed as the Wisconsin glacier retreated, leaving meltwater behind to create Lake Michigan and the other four Great Lakes. Winds whipped the glacial debris at the southern end of the lake into dunes that, over time, attracted anchoring vegetation. 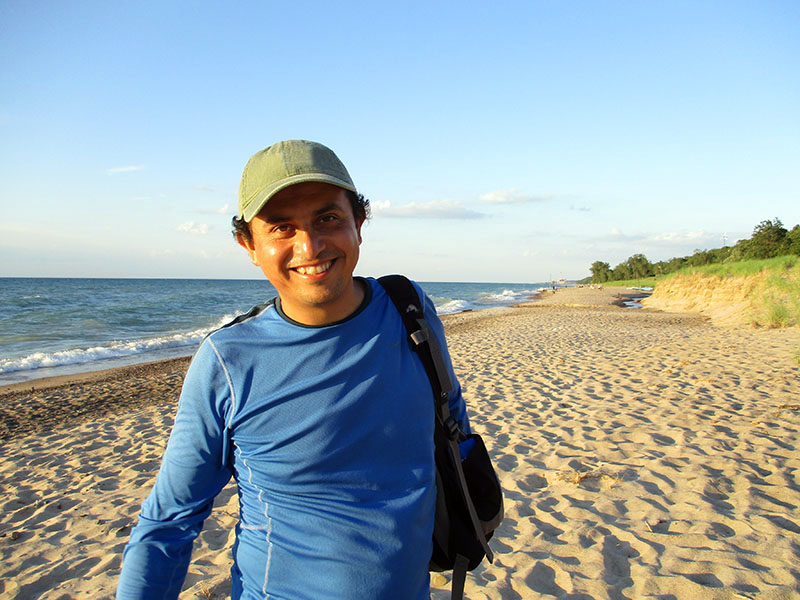 Because this area is so unique, scientists and concerned citizens began to worry about threats to it as early as 1899. Indiana Dunes State Park opened in 1926, but development pressure from industrial activity in Gary to the west and Michigan City to the east continued to imperil the area. Efforts by groups such as the Save the Dunes Council to expand the protected area paid off in 1966 when additional parcels became part of the National Park Service. 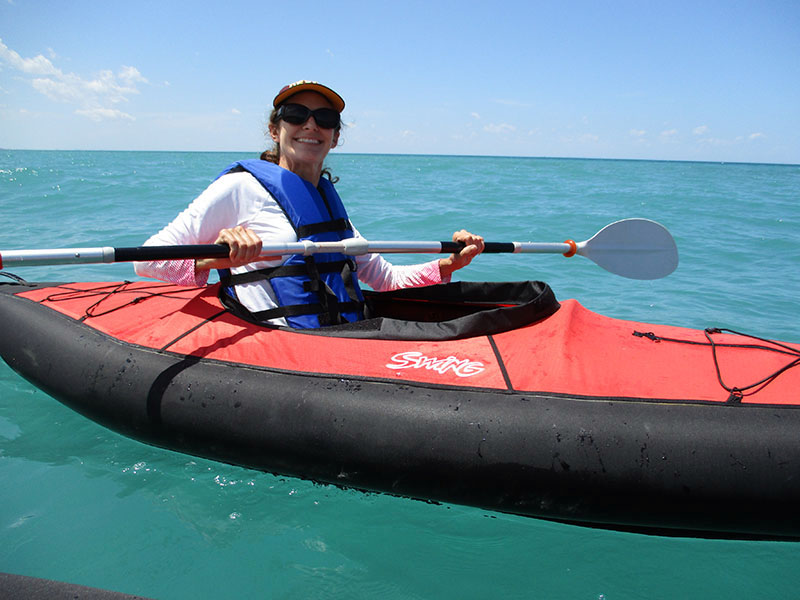 Later, we launched our kayaks in Lake Michigan from the Dunbar access point in the national park not too far from our campground and paddled west into the wind and waves. The waves were large enough to make us feel, once again, like we were at the ocean but small enough to be manageable, and in fact we had great fun. This being a lake, there were no sharks or other dangerous sea creatures to contend with, and fresh water is more pleasant than salt water to boot. 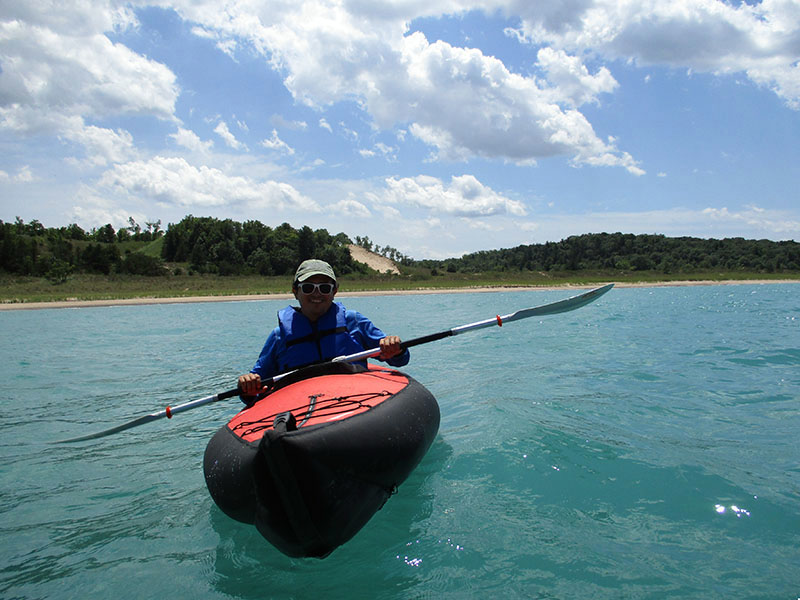 Park materials caution against taking anything but sea kayaks on Lake Michigan (or any of the Great Lakes, for that matter) and advise going out in a wetsuit, but we stayed close enough to shore to remain carefree, and the day was warm and sunny. After paddling past Big Blowout Dune in the state park, hunger finally drove us to turn around and we let the wind and waves propel us back to our launch spot on the beach. 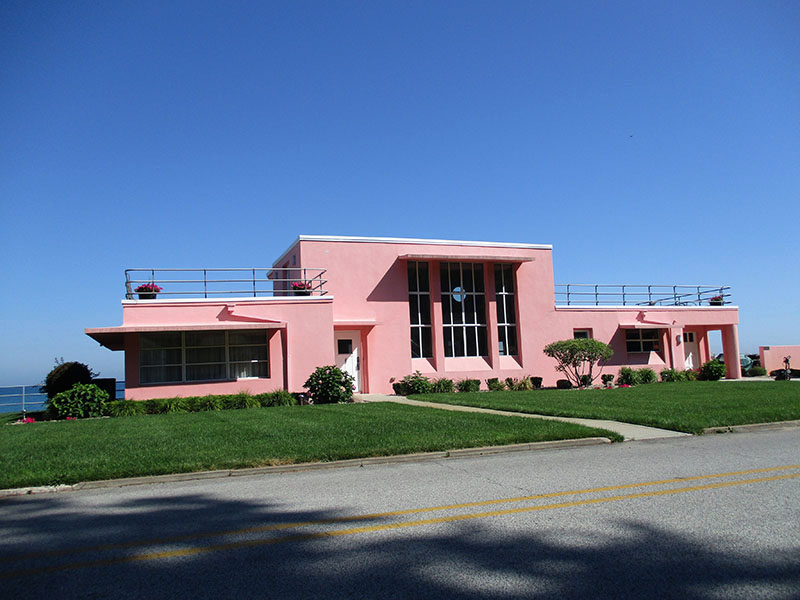 Not too far from Dunbar we found the most delightful house painted the most delightful shade of pink situated on a bluff above the beach along Lakefront Drive. Called the Florida House, it is one of four (out of 14 original) homes built for the 1933 Chicago World’s Fair with the theme “A Century of Progress” and brought here by a developer who wanted to promote Beverly Shores as a planned resort community. The National Park Service now owns the homes and leases them to private residents who are restoring and maintaining them. I fell in love with this modern home, and I now dream of someday building a replica of it somewhere (hey, Dad, are you in?). In the meantime, I’ve added something more achievable to my wish list: to see inside the home. Every October the Park Service offers a tour of the Florida House, so perhaps next year I can snag tickets and come back. 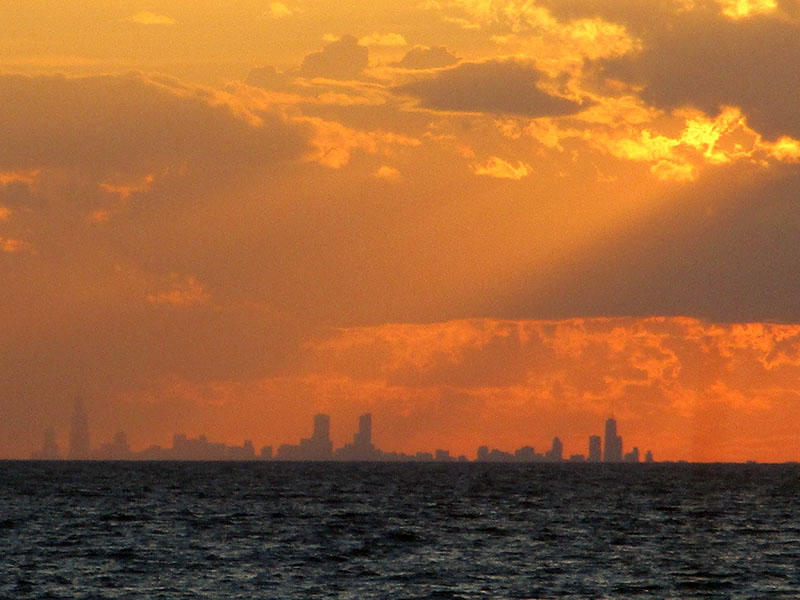 Later in the afternoon we walked from camp back to the beach to watch the kite surfers. One guy seemed to be struggling out in the water, and through the binoculars we could see that he had lost his board. He eventually made it to shore, but the wind and waves had picked up considerably by then. Local residents and tourists alike all seemed to come out to watch a gorgeous sunset and catch a glimpse of the Chicago skyline off to the west. Our perfect day ended on a bit of a down note as we left the cool breezes behind and arrived to a campground swarming with too many mosquitoes to cook dinner. It was sandwiches in the car and then into the tent. 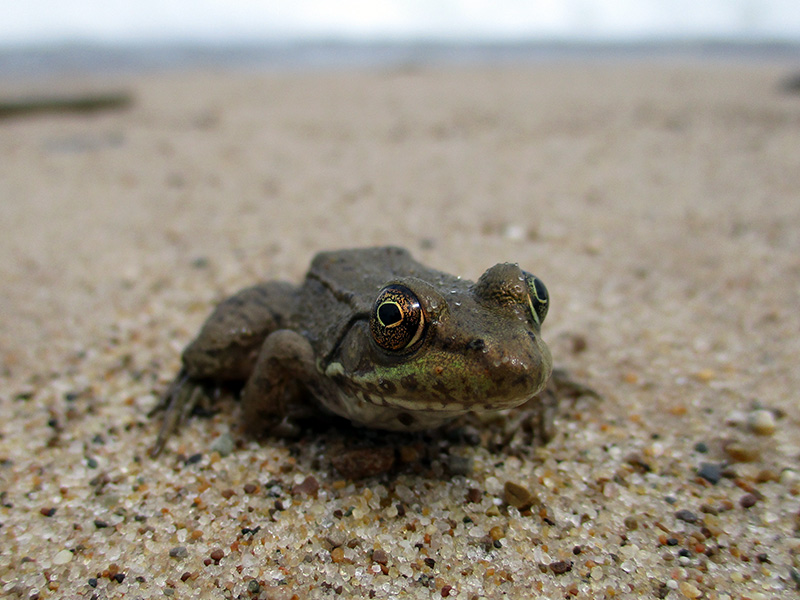 We had one more day to enjoy Indiana Dunes, so we began with another beach stroll. The breeze had returned with even bigger waves than the day before, making us glad we chose to paddle when we did. This time we noticed dozens of little green frogs hopping among the pebbles near the surf. Many of them leapt into the water only to be thrashed about by the strong waves and killed. We don’t know whether they were on some suicidal spawning mission or simply tried to flee from people walking on the beach without realizing that the powerful surf was more life-threatening.

We drove on to one of the western parcels of Indiana Dunes National Lakeshore and stopped at the Portage Lakefront and Riverwalk for a picnic lunch. Here, we learned about how Bethlehem Steel had dumped toxic waste into the Burns Waterway in the 1960s. The land was later transferred to the Park Service and cleaned up, and revegetation efforts paid off over time as wildlife returned. A small beach, fishing pier and breakwater next to the education center now provide a tidy little recreation area.

In the midst of busy Lake Michigan industry, Indiana Dunes could have ceased to exist as a place of natural beauty, recreation and escape for weary city-dwellers. We are grateful to those who cared enough about this special place to protect and restore it for people like us to enjoy today.

8 thoughts on “Indiana Diamond in the Rough”