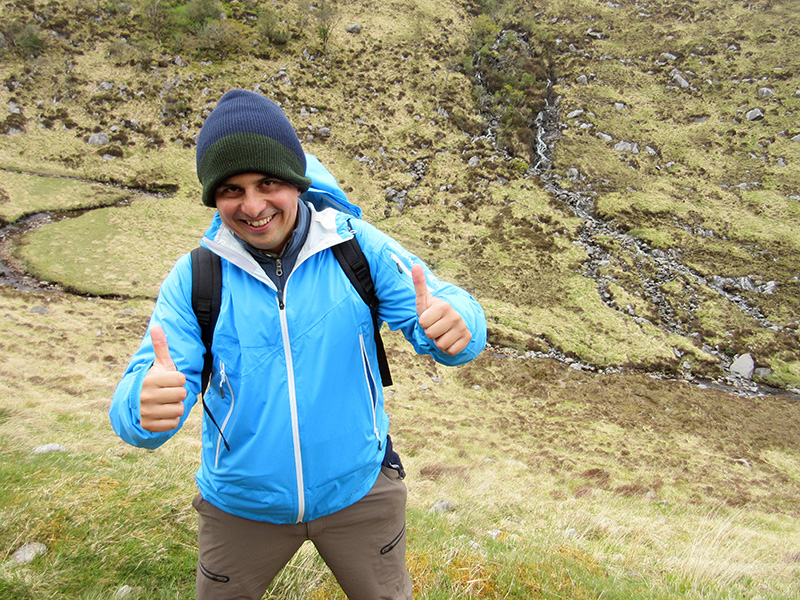 As we continued our counterclockwise road trip of Ireland, more dramatic scenery awaited us in Donegal, the northwestern-most county in the Irish Republic. Although it’s somewhat off the beaten tourist path, we found it the perfect place to get out of the car and lace up our hiking boots. Once we left the green farm fields surrounding the County Donegal town of Letterkenny and approached Glenveagh National Park, the terrain grew rugged yet with a soft edge. Moss-carpeted granite rocks resembled an army of trolls in the bogland. In mid-May when Hector and I visited, the brown, mostly treeless heathlands looked from a distance, to our desert-adapted eyes, like dry terrain. But up close, small rivulets filtered downhill and the blanket bog and wet heath habitat was as moist as a freshly baked carrot cake. 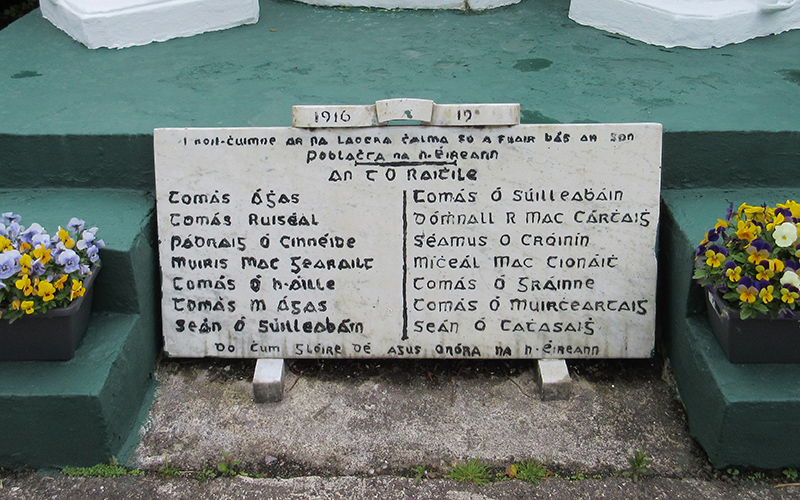 Donegal is largely a Gaeltacht region, where many locals speak the Irish language in their daily lives, signage may be only in Irish and Irish-language radio stations prevail. Since we spent so much time in the car, we had ample opportunity to listen to the language. We also own a decent collection of traditional Celtic music with many songs sung in Gaelic, but we still had little clue what they were saying. Nevertheless, these small regions dotted throughout the west of Ireland — in counties Donegal, Mayo, Galway and Kerry — have an extra-special feeling to them. Maybe before we come back on our next trip (there will always be a next trip when it comes to Ireland), we’ll take some language lessons. 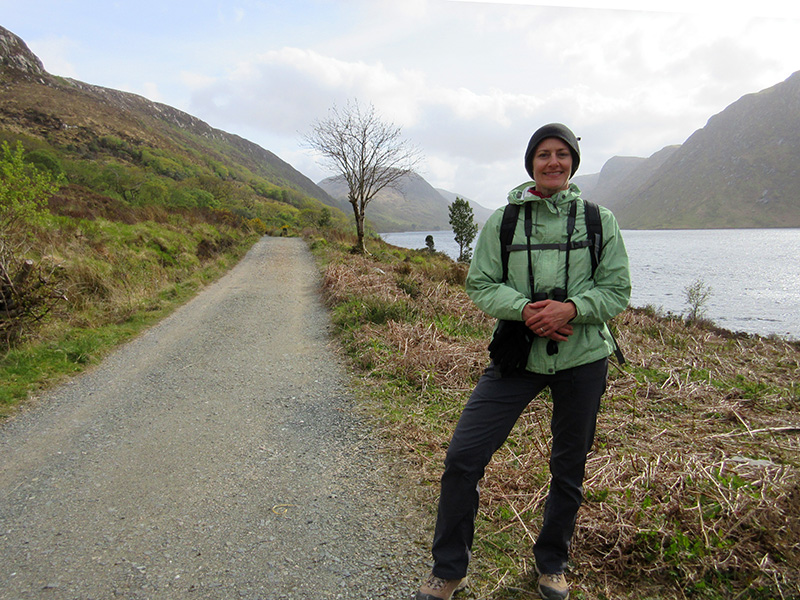 We stopped in at the Glenveagh National Park Visitor Center and got hiking recommendations from the very friendly man staffing the front desk. He suggested the lakeside walk, a level track that led past Glenveagh Castle on the eastern shore of Lough Veagh and continued to the southern end of the lake. 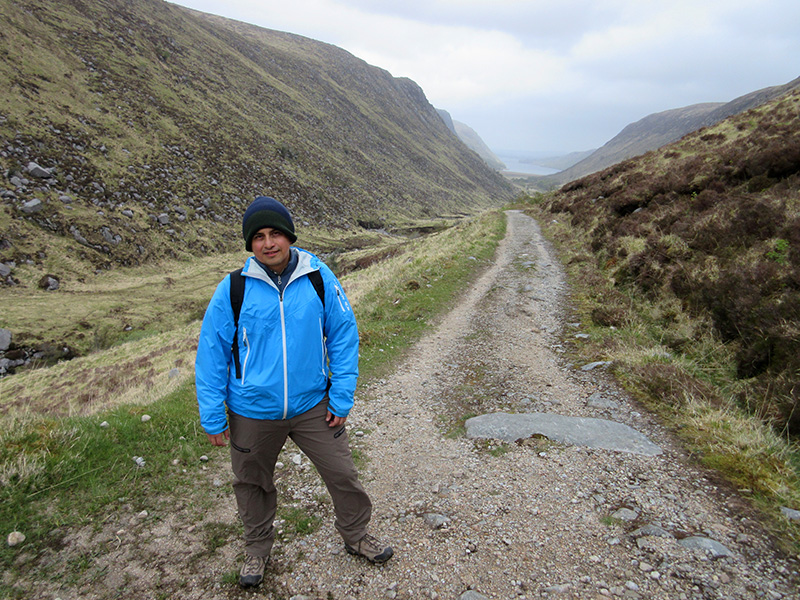 From there we then climbed to top of the glen, where the trail intersected the R254 rural road and afforded lovely views of the U-shaped, glacier-carved valley that drained into the lake below. We headed back downhill, and as we approached the lake once more toward the end of the afternoon, cuckoos began calling in the distance. At that point it was too late for a castle tour, but we did walk through the extensive gardens that were immaculately manicured and full of spring blossoms. 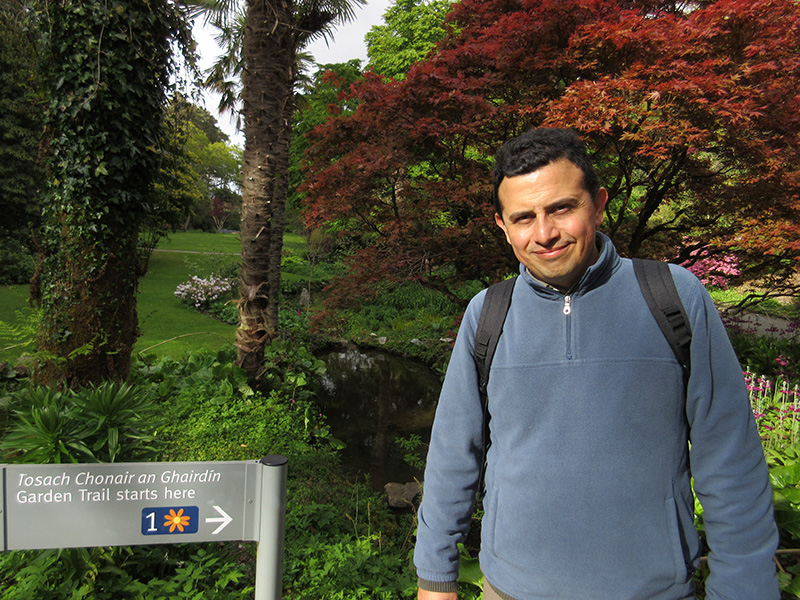 Driving on to our B&B in the small town of Bunbeg on the Atlantic Coast, we drove past Mount Errigal, the tallest peak in Donegal, which we wanted to climb the next day. Bunbeg felt abandoned. We were the only guest staying in the B&B and the pub down the block was closed. No restaurants were open, so we picked up a few grocery items from a small shop nearby for dinner. The young man who checked us into our B&B said we had arrived just before the tourist season started, but he admitted that the poor economy in recent years had done the town no favors. “Even the sandwich factory closed,” he lamented. I guess that’s where they used to manufacture sandwiches? 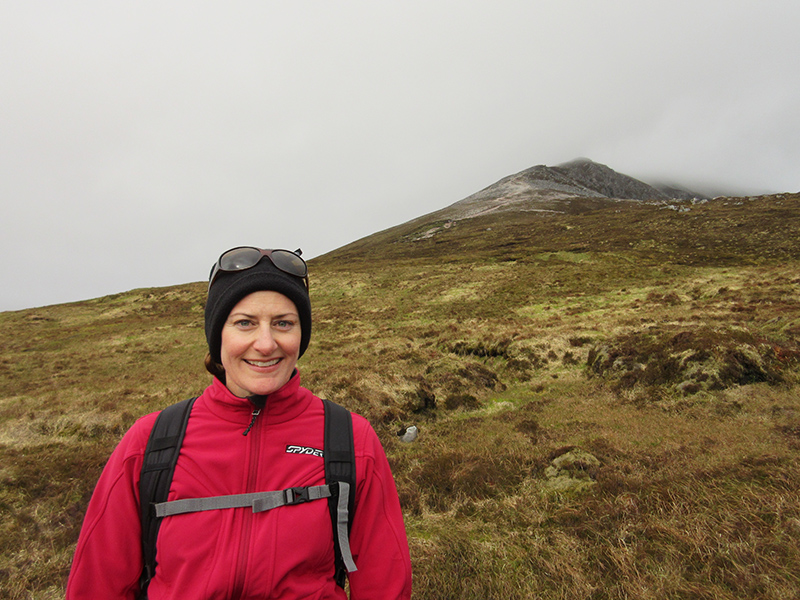 We mentioned our plans to climb Mount Errigal, and he cautioned that we shouldn’t attempt it in wet conditions because the trail through the bog would become impassably muddy. He also said that foggy weather makes route-finding to the summit dangerously difficult once you hit the rocky talus above the vegetation line. 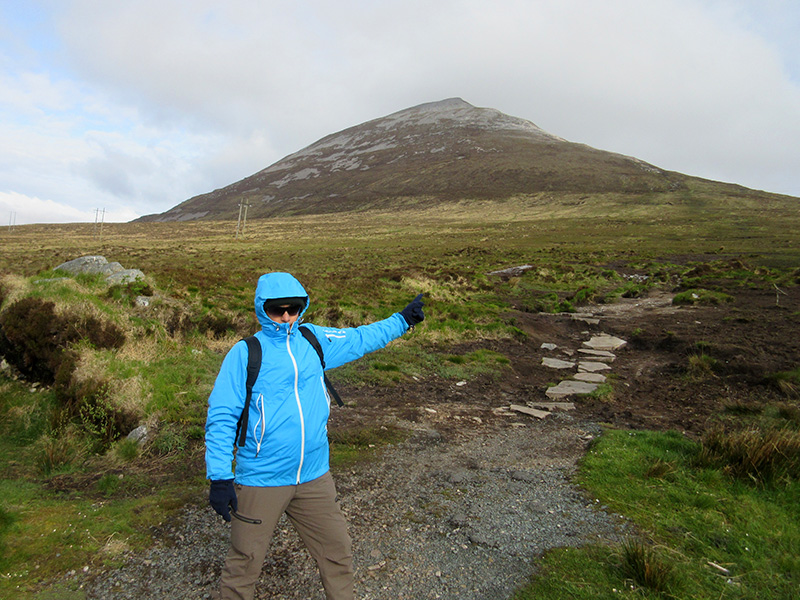 The next morning we awoke to clear skies and had a good view of the summit, but the sky clouded over as we arrived in the parking lot at the base of the mountain. We squished through the bog at the lower elevations, then once we reached more solid footing on the scree, the mist thickened dramatically. We proceeded uphill another half an hour but, having no clue how far we were from the summit, we decided to turn around to avoid wandering around lost in the fog. Rain arrived on our descent, which meant we had to slog through even more mud, but we were glad to get back to the car — albeit cold, wet and a little disappointed. 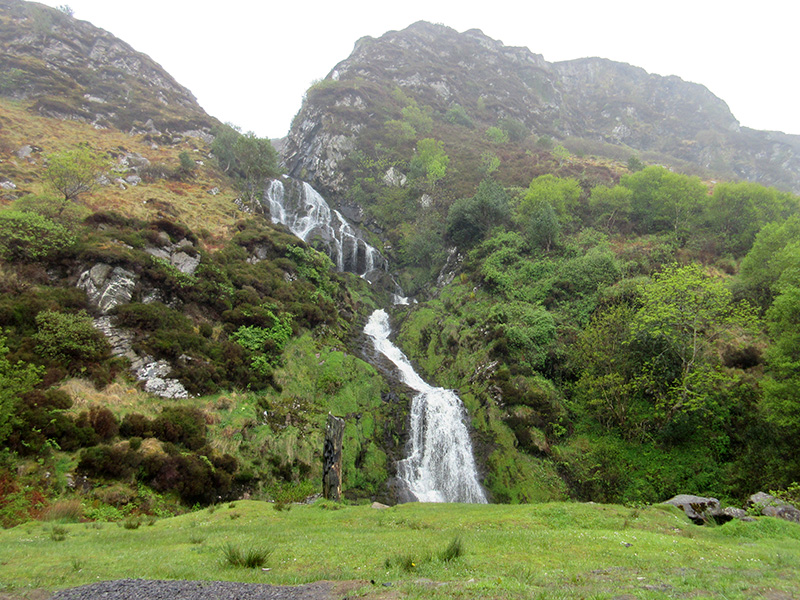 We had a long day’s drive ahead of us to get to our next destination, Westport. We followed the Wild Atlantic Way, a scenic drive of some 2,500 km on Ireland’s west coast that passes through picturesque countryside and villages. Just past the charming town of Ardara we sidetracked to the Assaranca Waterfall and Maghera Caves off a very narrow, twisting road. We then moved south and west over Glengesh Pass to Glencolumbkille. Our B&B host recommended stopping at the Slieve League cliffs near there that reportedly rival the more famous Cliffs of Moher farther south in County Clare. It would have added only 40 minutes of driving time, but we knew we’d want to explore the area for at least another hour and still had a long way to go. 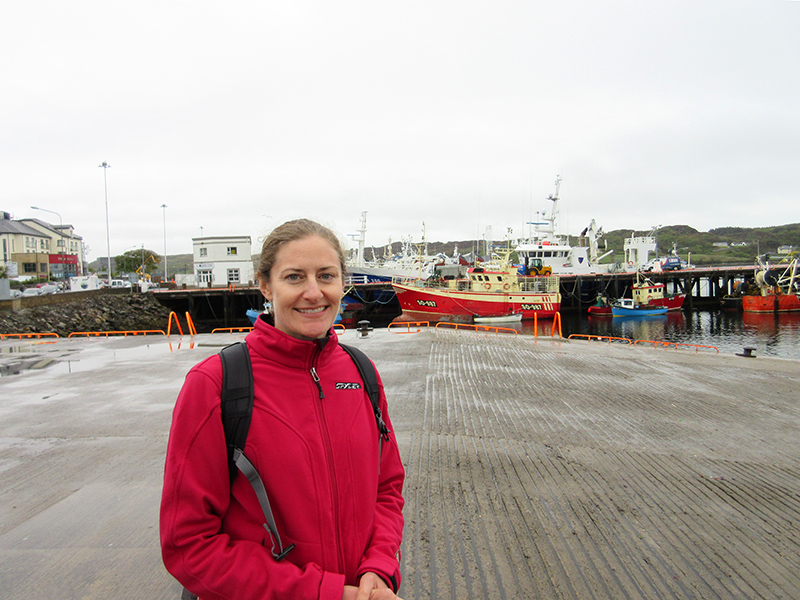 We also realized that we hadn’t eaten anything since our full Irish breakfast that morning, so we headed to the harborside town of Killybegs for a late lunch. Like so many other Irish towns, it was neat, tidy and full of charm, and naturally, given that Killybegs is a major fishing port in Ireland, we ordered seafood. We then continued south into County Sligo and on into County Mayo for our overnight stay in Westport, where more delightful scenery and hiking trails awaited us. Keep your boots on — our Westport-area recap is next.

One thought on “Hiker Haven in Donegal”