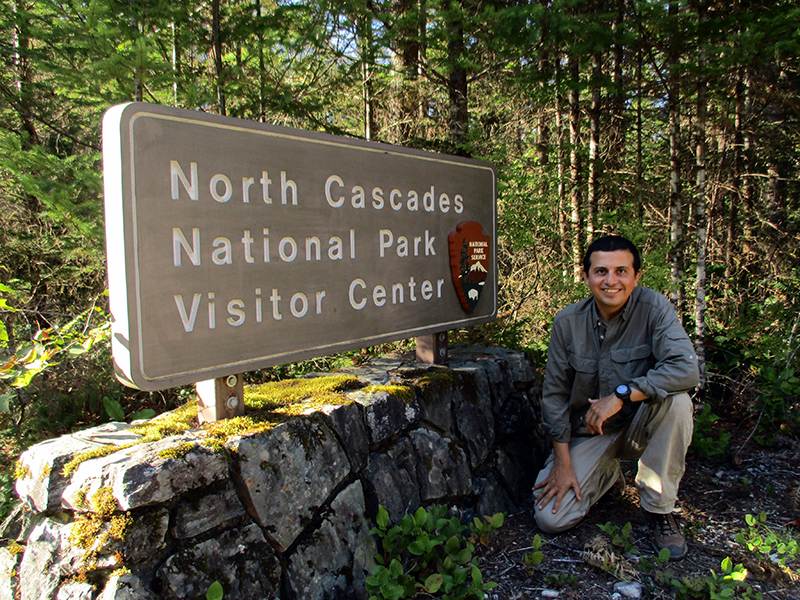 With more than 300 glaciers still intact, North Cascades National Park has more glaciers than any other park in the Lower 48 states. But the its magic goes well beyond rugged Cascade Mountain Range scenery. Together with the adjacent Lake Chelan National Recreation Area to the south and Ross Lake National Recreation Area, which connects North Cascades’ two main parcels in the middle like a zipper, this enormous protected area complex encompasses nearly 685,000 acres of mountain, river, lake and forest habitat. 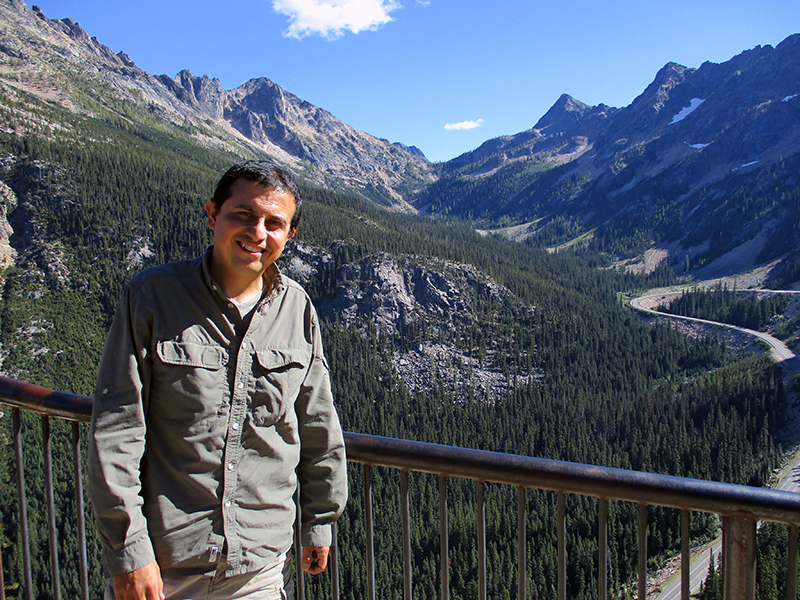 Much of this vast park is accessible only by boat, on foot, or via four-wheel-drive vehicles. We spent our time here in the Ross Lake region just off Highway 20, which bisects the park from east to west in the summer and provides the easiest entry points. Coming in from the east, the scenic road followed the deep gorge of Granite Creek, then joined the Ruby Arm of Ross Lake and continued past the Skagit River’s three dams in the heart of the park. These dams provide hydroelectric power for the city of Seattle and recreational opportunities for boaters and anglers in Ross, Diablo and Gorge lakes. 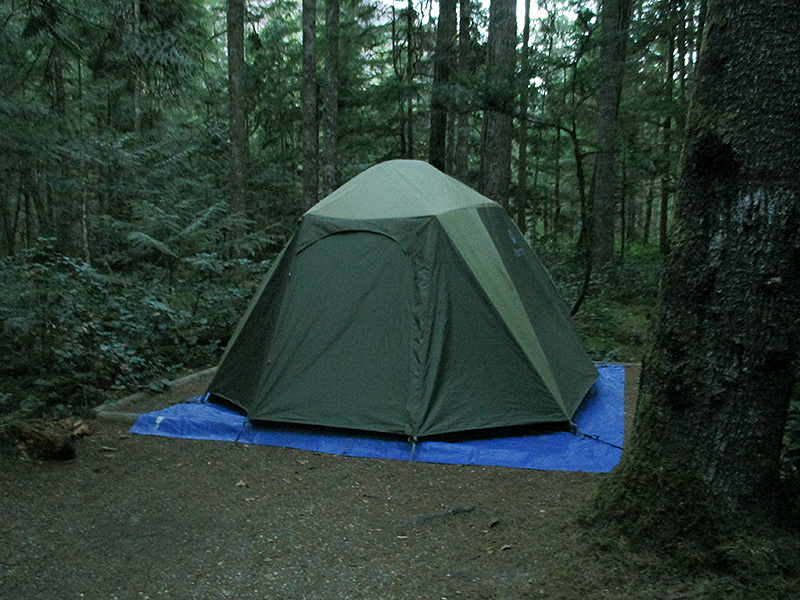 Even at the tail end of the season in late September, the air was buzzing with a welcome warmth when we arrived at the Newhalem Campground toward the western side of the park. Tall cedars provided ample shade, and the thick rainforest vegetation muffled the noise of the few other campers present. We could almost imagine fairies and elves hiding among the ferns and moist, fallen logs. 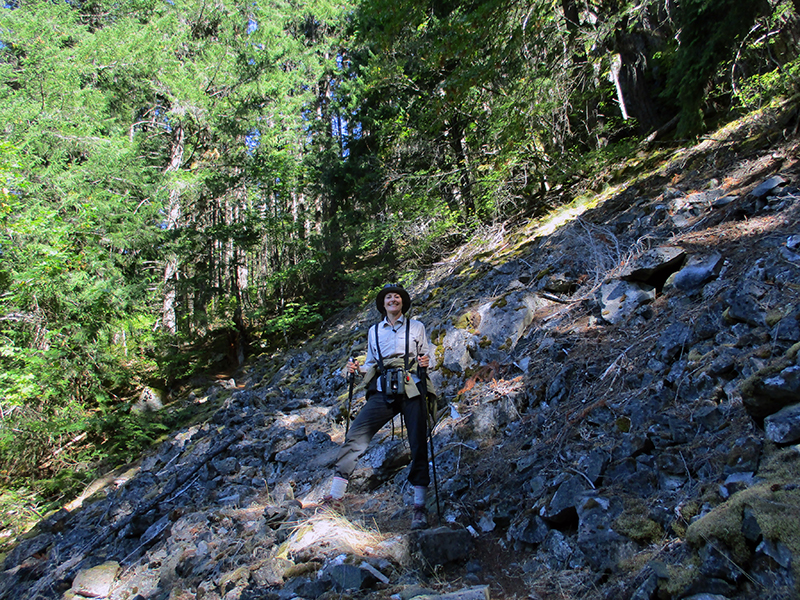 For our first hike the next day we chose the Sourdough Mountain Trail, a strenuous 10-mile out-and-back trek. Immediately the trail rose at a steep and unrelenting incline. The path gains roughly 1,000 feet per mile — steeper than trails in the Grand Canyon! Despite its challenging nature, the trail was a delight. With every step, a fragrance of spruce, pine and Douglas-fir emanated from the carpet of needles below our feet. At several openings in the forest we could see Diablo Lake below, a beautiful valley to the west and glaciers in the surrounding peaks. 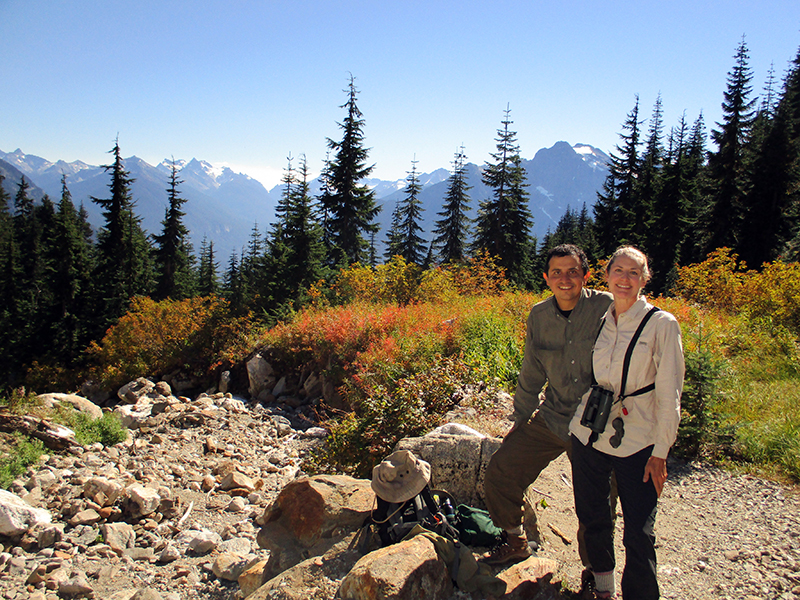 With a hearty breakfast in our bellies, we thought we could make it to the end and back to camp by lunchtime. However, nearly four hours later when we reached Sourdough Creek, we realized we had gone through more than half of our water and all of our snacks. We decided to turn around and forgo the highly touted breathtaking views and flower-filled meadows along the trail’s last mile from the creek crossing to a historic lookout. We were satisfied with the magnificent views we’d already seen. 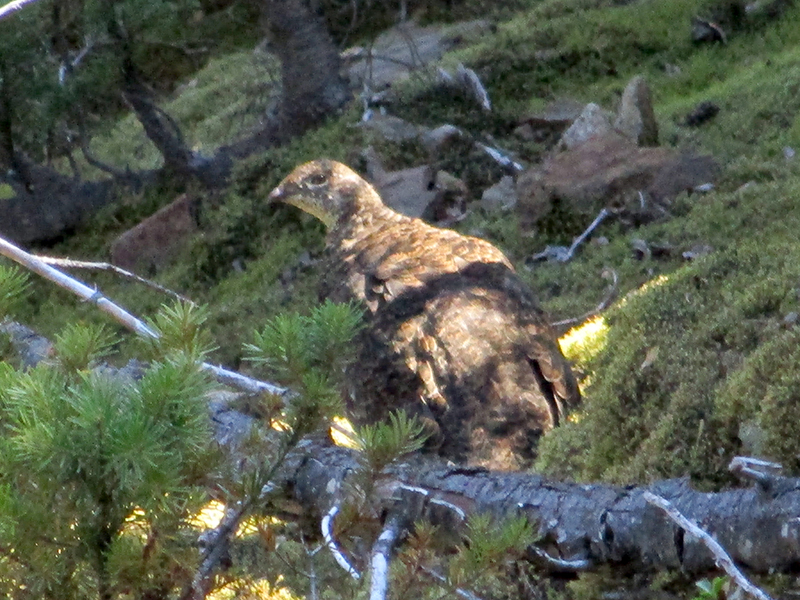 Going down was easier on the lungs but tougher on the knees. On the return trip we also saw several new birds, including a hen and juvenile spruce grouse, that put a bit of a spring in our step. By the time we reached the trailhead, however, we were utterly beat. We had a very late lunch in camp and called it a day. 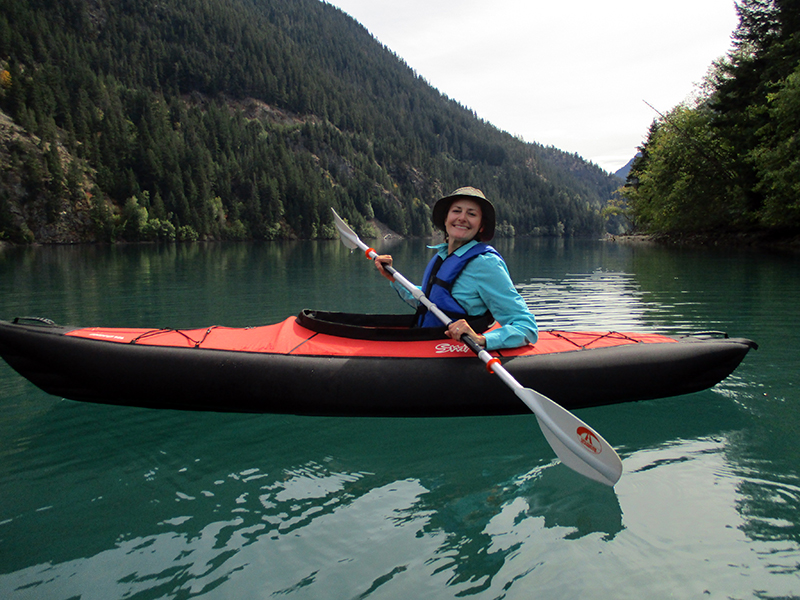 The next day dawned cloudy but calm — perfect for getting out on the water. We drove to the boat launch next to the Colonial Creek Campground, inflated our kayaks, and paddled downstream into Diablo Lake. Set in a deep gorge with glassy, turquoise-colored water surrounded by a dense evergreen forest, the lake provides a tranquil place for kayakers as well as a variety of ducks, mergansers and goldeneyes to enjoy the day. We then circled back and paddled upstream from the boat launch in a more sheltered part of the lake until the water became too shallow to continue past the mouth of Thunder Creek. 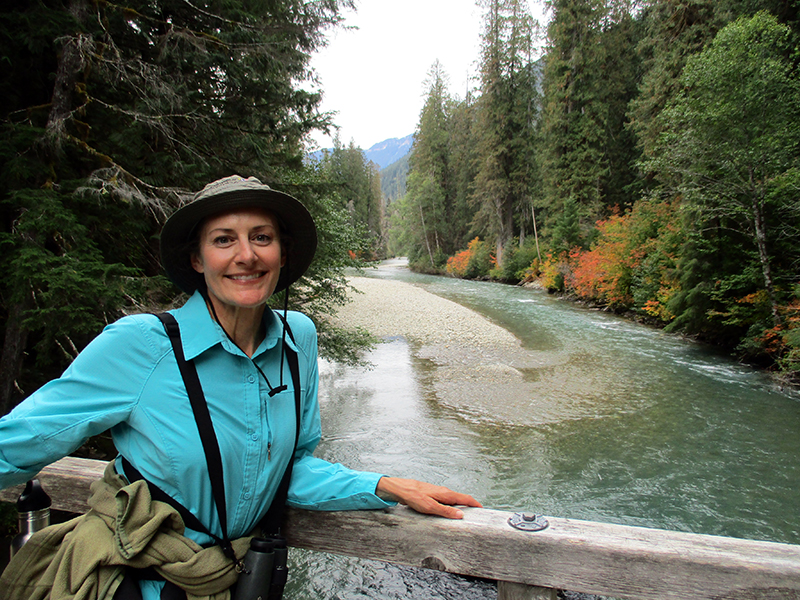 The area’s beauty enchanted us so much that we spent the afternoon exploring it on foot. Hiking along the Thunder Creek Trail from the campground’s terminus, we nearly skipped with glee as we walked. (In fact, we liked this trail so much it earned a place on our list of favorite Project 100 hikes.) The path followed the glacial creek and traversed a most magical patch of old-growth rainforest filled with tall trees, enormous ferns and a thick carpet of green moss on nearly every surface. 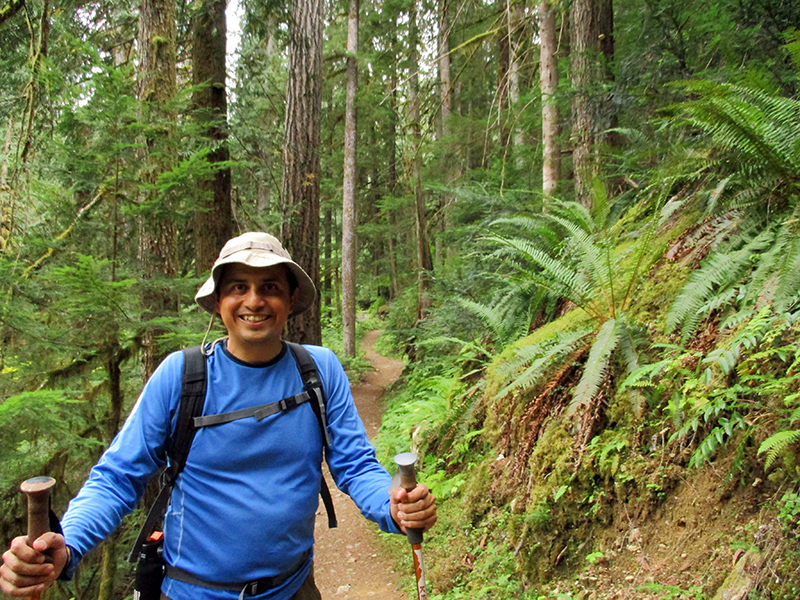 We felt like we were in Jurassic Park and half-expected to see a pterodactyl flying toward us through the canopy. We only went in a few miles before returning, but the trail continues for 40 miles, with numerous back-country campgrounds scattered along the way. We were a bit envious of the backpackers we passed beginning their multi-day treks as we headed back to the parking lot.

The forecast called for overnight rain, so we were no longer envious of all the backpackers. As we settled into our spacious and waterproof tent, a pair of barred owls landed in the trees directly above us, squawking and caterwauling with abandon. Leaping out of the tent, we shone our headlamps low in the trees and eventually located them. Rather than flying away, the owls blinked at us and continued their raucous hooting for some 10 minutes as if they were giving us a stern scolding. It was indeed a magical, memorable moment. Conservationists in the Pacific Northwest generally dislike barred owls because the birds have been encroaching on old-growth territory and squeezing their cousin, the northern spotted owl, into threatened species status. Yet we were delighted to finally see the creature that has filled many of our nights since February with its vociferous, eerie call. 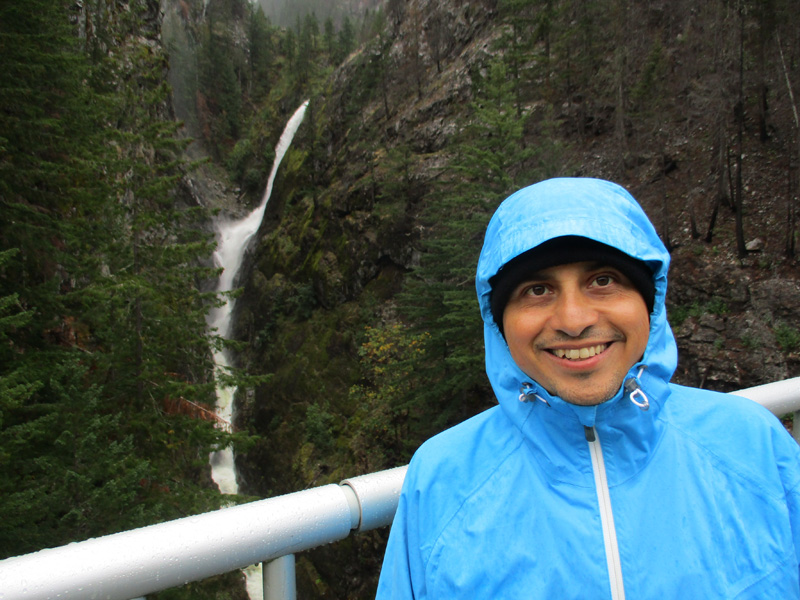 The rain continued all night long and throughout the following day, making it a near washout. But we ventured briefly up the road to check out the North Cascades Environmental Learning Center. This small campus is in a beautiful setting on Diablo Lake, not far from where we kayaked the day before. Operated by the North Cascades Institute, the center hosts classes, retreats and special events throughout the year, but, alas, had no activities the day of our visit. On our way back to Newhalem we stopped off at Gorge Creek Falls to admire the 242-foot waterfall — one of many that roared to life from the day’s rain — and dramatic views of the Skagit River below the Gorge Dam along a short overlook trail. This was the Pacific Northwest at its most quintessential. 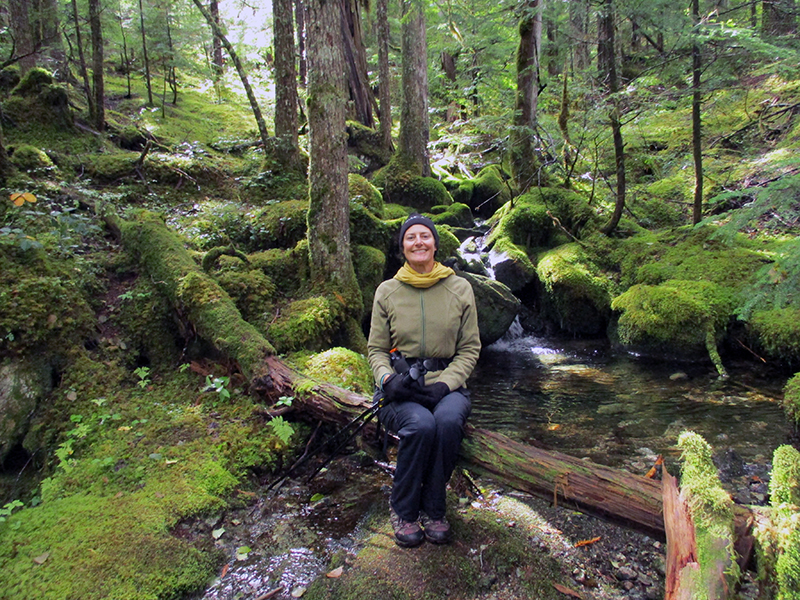 The sun came out on our final day in the park, so we set off for the Pyramid Lake Trail. The 4.2-mile round-trip hike ascended steeply through lodgepole pine woodlands followed by hemlock, cedar and fir forest along Pyramid Creek. Once again we entered a lush, moss-carpeted forest and soon became soaked by the wet vegetation nearly overgrowing the trail. The trees grew wider and taller — some reaching 500 feet — as we climbed, and we soon came to Pyramid Lake. 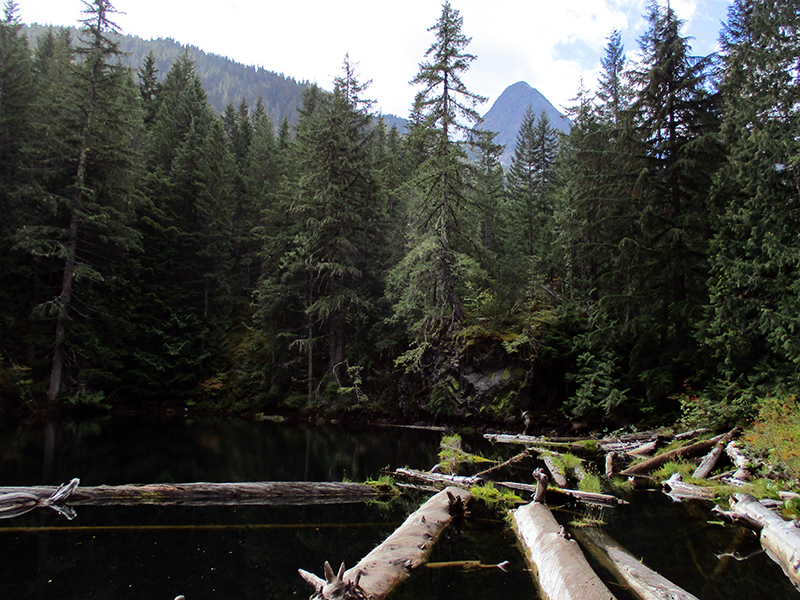 Although rather tiny, the lake was a twinkling jewel with its floating logs upon which diverse plant communities thrive. On one shore of the lake, the leaves of several large vine maple trees showed off their red fall colors, and beyond the other shore we could see a few glaciers and the distinctive, 71,82-foot Pyramid Peak that is the lake’s namesake. Reluctantly, we left this idyllic spot and headed back downhill to continue our onward journeys in the Pacific Northwest.