Meet the dynamic traveling duo of Christi and Hector. For years we’ve been monkeying around with assorted adventures and documenting our explorations in words and pictures on an informal basis. Now, we’ve decided it’s time to gather all of our bananas into one bunch and invite folks to come along for the ride online.

I can thank my maternal grandparents, Emelia and Nick, for planting in me the earliest seeds of a desire to travel. They bought a camper in retirement and set off from their home in small-town Southern Illinois to visit Nova Scotia, Alaska, Mexico, and all points in between. During family gatherings when they were home from their wanderings, we’d all gather in the darkened basement in front of the pull-down screen as Grandma clicked through their 35mm slides. I was transfixed by the images of far-away places in the glow of the projector. 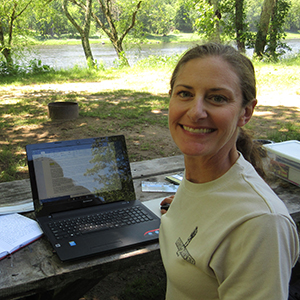 By the time I was in my early twenties, devouring books and movies about travel and adventure to inspire my own journeys, I also discovered that writing about these far-off places was almost as fun as being there. Since then my itch to see with my own eyes how other people live — and witness the incredible array of this planet’s wildlife, landscapes and cityscapes — has taken me to Asia, Africa, Central and South America, Oceania, Europe and the far corners of North America. Scratching that itch also drew me from the desert Southwest to Mexico City, a vibrant stewpot of sights, sounds, and tastes that I called home for four years before returning stateside. And it was in Mexico City that that I met and married the other half of Monkey See Monkey Travel.

Unlike Christi, who sees someplace on the map or in a book and is compelled to travel, I like to get outdoors and explore new places as a source of creative energy and inspiration for my visual art. I’m an illustrator and graphic designer by trade who thrives on learning about the world around me. Extensive road trips and journeys have taken me to all but three states in Mexico, along with a smattering of Central American destinations plus the delightful island nations of Ireland and New Zealand. Now that I live in Arizona, I’m happy to have one of my favorite places right in my backyard — the Grand Canyon.