A major storm with freezing rain scuttled our plans in Glacier National Park for an entire day. The following day, however, we were determined to make up for lost time by getting a very early start. Our plan was to hike another highly popular trail that begins at Logan Pass, the Hidden Lake Tail. Yet when we boarded the shuttle, the driver advised us that due to heavy overnight snow, Going-to-the-Sun Road was closed beyond The Loop — a major switchback in the road some three-quarters of the way to the top. Undeterred, we hopped off the bus there and started up the Loop Trail, which sits at the opposite end of the Highline Trail and is another popular route for its scenic beauty. 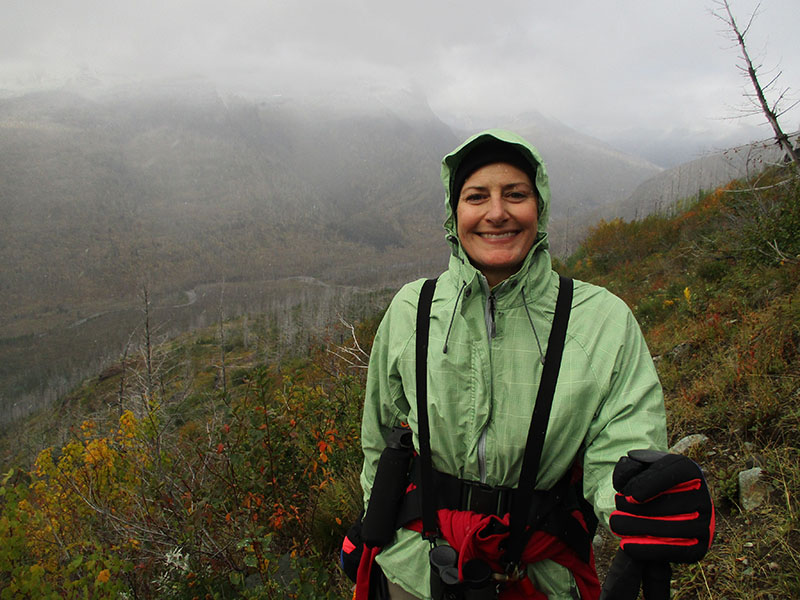 After traversing a patch of forest that burned in 2003, the air became misty as we climbed. We soon reached another couple from our shuttle coming back down. They had wanted to climb to the Granite Park Chalet, a small, hike-in lodge four miles from The Loop at the crossroads of several trails. However, they spotted a mother grizzly and her cub not far off the trail and didn’t have bear spray. Because Hector and I had ours with us, and because generally there is safety in numbers, the four of us decided to continue uphill together making noise to warn the bears of our approach and holding our bear spray at the ready. Shortly thereafter we met two other couples who were also headed up, and we all marched along clapping, shouting and having a jolly good time in loud conversation. That must have done the trick because the bears stayed out of sight.

The mist turned to a light dusting of snow as we climbed, and soon the ground and spruce and fir trees were covered in a thick blanket of white. By the time we reached Granite Park Chalet, we were walking in a hushed, winter wonderland.

The lodge’s historic stone buildings — dating to 1914-15 and on the National Register of Historic Places — had just closed for the season, so our hopes of getting a cup of hot cocoa were dashed. At about 6,500 feet in elevation in the shadow of several major peaks, the season is short here; rooms are available only from the end of June through early September. With all the snow on the ground, we could see why. We spoke to a ranger packing a train of horses with mattresses, laundry and other items to take down for the winter. He told us that anyone wishing to book accommodations should plan a good 10 months in advance because the chalet books up fast.

As we headed back down the trail, we passed quite a few other hikers on their way up. None of them had seen any bears, so we could all relax and enjoy the scenery, which almost rivaled that of the Highline Trail. Chilled though we were at the top, we eventually warmed up as we descended below the snow line. This was a memorable, enchanting hike, in part due to the serene hush from the snow, and we made a mental note to one day return in midsummer with reservations at the Granite Park Chalet. 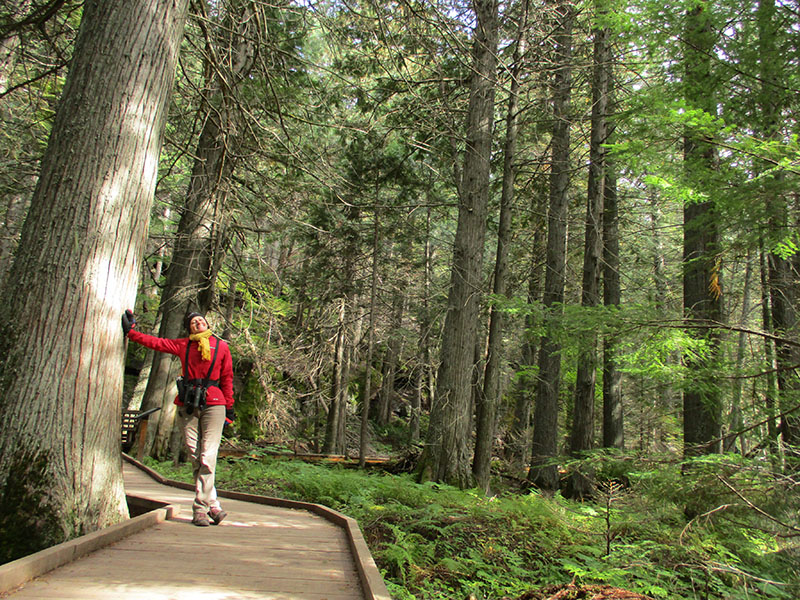 Our final hike in the park was a completely different experience. In the Avalanche Creek section of the park lower down at 3,500 feet, we took the Trail of the Cedars nature trail. A raised boardwalk led through a rainforest of immense western red cedar and hemlock and trees that reached dizzying heights of up to 100 feet. 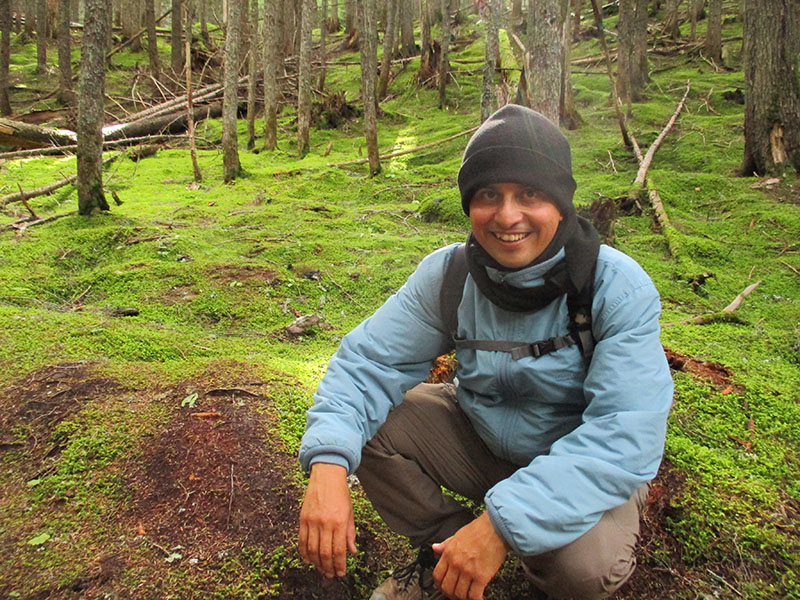 The ferny understory below towering trees gave way to a softer carpet of green moss once we connected to the Avalanche Lake Trail. As we followed this path along the creek for two miles, we felt the hush of the forest descend upon us once again.

The trail emerged at an amphitheater lake carved by glaciers that retreated long ago. High above, Sperry Glacier melts into several high, skinny waterfalls that keep the lake and creek fed with freshwater. With water and cool, moist air surrounding us, we couldn’t help but feel refreshed even after a very long day on our feet. As our time in Glacier National Park drew to a close, we knew we’d only barely scratched the surface of the park’s astounding beauty. Whether any permanent glaciers will still be here by the time we make a return trip remains to be seen, but there’s so much to explore and experience here that it’s never too late to visit the Crown of the Continent.

5 thoughts on “Glacier – From Snow Forest to Rainforest”