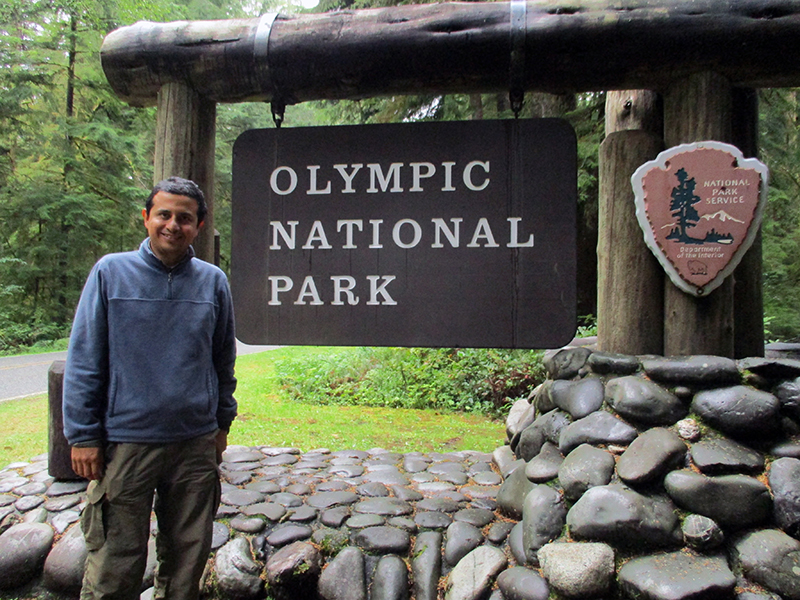 In the far northwest continental United States, the Pacific Ocean caresses — and sometimes wallops — the shores of Washington’s Olympic Peninsula. A vast swath of land on the peninsula is protected wilderness as part of Olympic National Park, which ranks among our favorite parks for its diversity of land and seascapes. Here you can marvel at the scenery along the coast, in lush temperate rainforests, among sub-alpine meadows, and in the shadows of glacier-topped mountain peaks nearly 8,000 feet above the sea. The park truly is a treasure chest of nature on a grand scale. 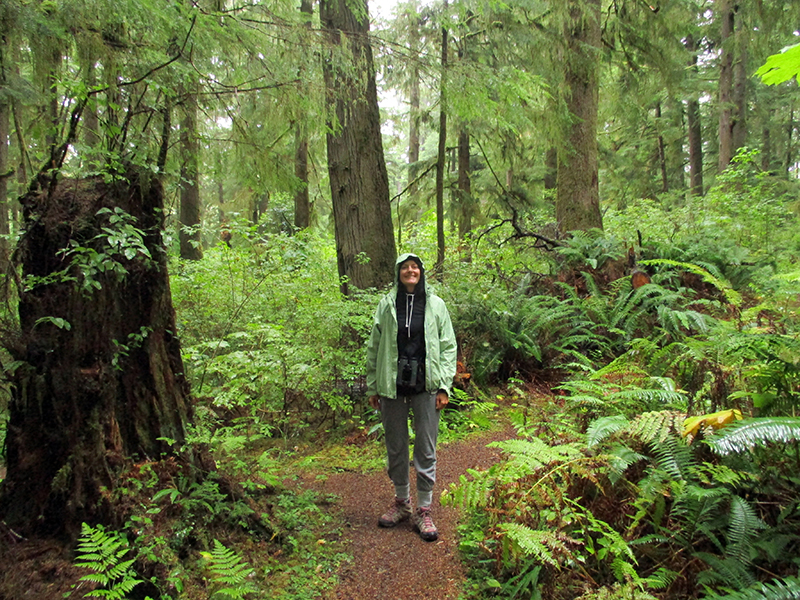 Olympic National Park also protects the largest old-growth forest in the Pacific Northwest. Yet that protection largely stops outside the park boundaries. Although numerous Olympic National Forest parcels surround the park, the agency that manages those parcels — the National Forest Service — permits logging. And as a result, there is a stark difference in the beauty, species diversity and health of the forests inside versus outside the national park, not to mention the noise and traffic from the many logging trucks that traverse Highway 101 encircling the peninsula. 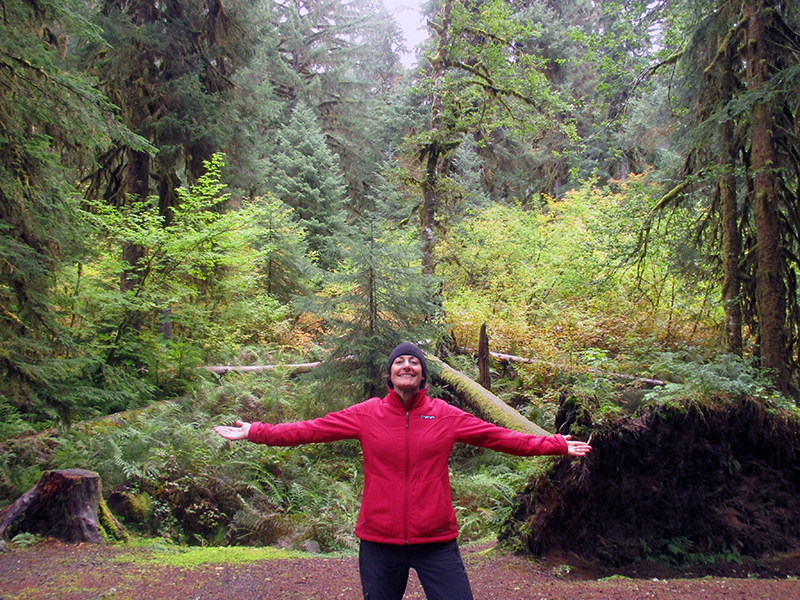 To really get away from it all, you have to move deeper inside the park, so we used the Sol Duc Campground in the northern, inland part of the park as our base. Sol Duc sits in a delightful patch of moist lowland forest. Soaring, moss-covered trees anchored our campsite like multiple church naves. The dense canopy above allowed just enough sunlight to filter down and sustain the thick vegetation on the forest floor. The ample shade and chilly, humid air of late September made this among the dampest and most verdant campgrounds we’ve stayed in. 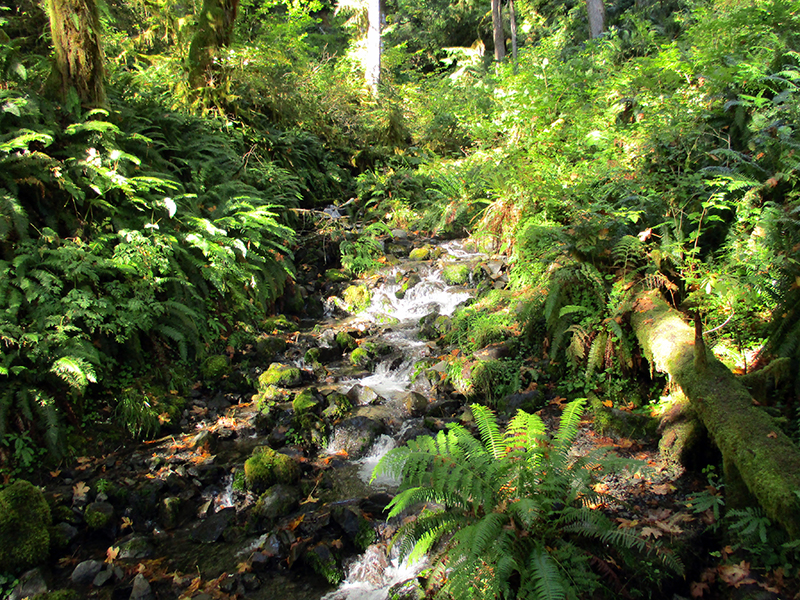 As the crow flies, one of the park’s star attractions — the Hoh Rain Forest — sits some 13 miles from Sol Duc. However, getting there on foot requires a trek of double that distance up and over the High Divide mountain pass, so we opted instead for the 75-mile drive to Hoh. Even though the temperate rainforest at Hoh looks very similar to the lowland forest at Sol Duc, they differ in the amount of moisture they receive. Hoh’s ocean-facing valleys trap more incoming moisture from the Pacific, receiving up to 170 inches of rain a year, especially during winter. 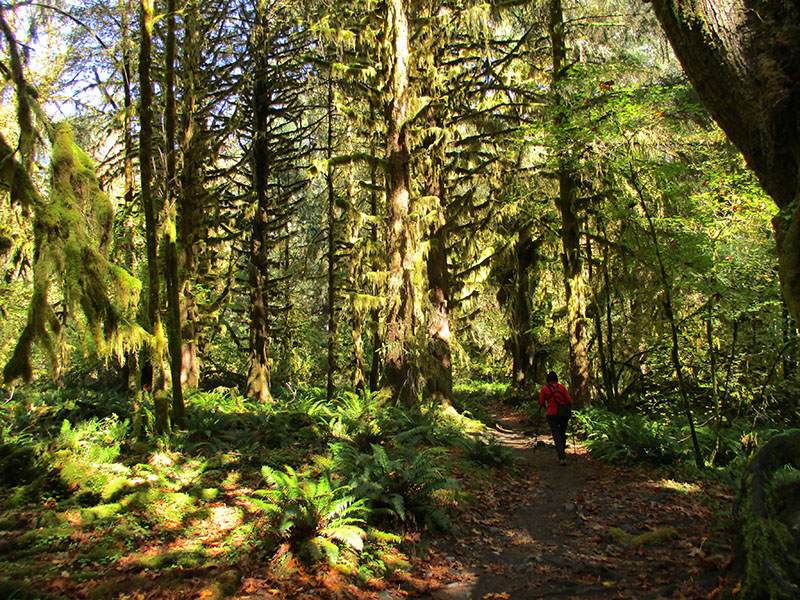 Unlike tropical rainforests, temperate rainforests experience cooler temperatures (and thus slower decomposition) and longer-living trees that are more often coniferous than deciduous. In addition to the 130+ species of ferns, lichen and moss found here, conifers such as sitka spruce, western hemlock and Douglas-fir abound, imparting an invigorating fragrance to the air. 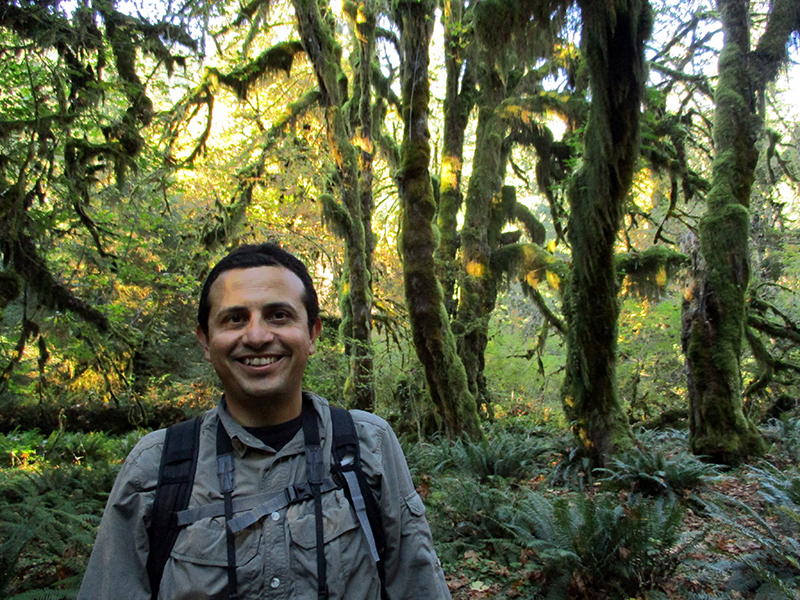 In the company of numerous chestnut-backed chickadees and Pacific wrens serenading us, we followed the undulating Hoh River Trail from the Visitor Center for about three miles to Mt. Tom Creek. On the return trip, we detoured on the Hall of Mosses Trail, which took us through a fanciful scene of lofty trees up to 300 feet tall. Fallen “nurse” logs host an incredible array of leafy plants, fungi and conifer seedlings that grow on the rich decaying wood instead of the forest floor. Every branch seemed to sag with cat-tail moss and other epiphytic plants. Despite the name of the place, we had not a drop of rain on the sunny day we visited. 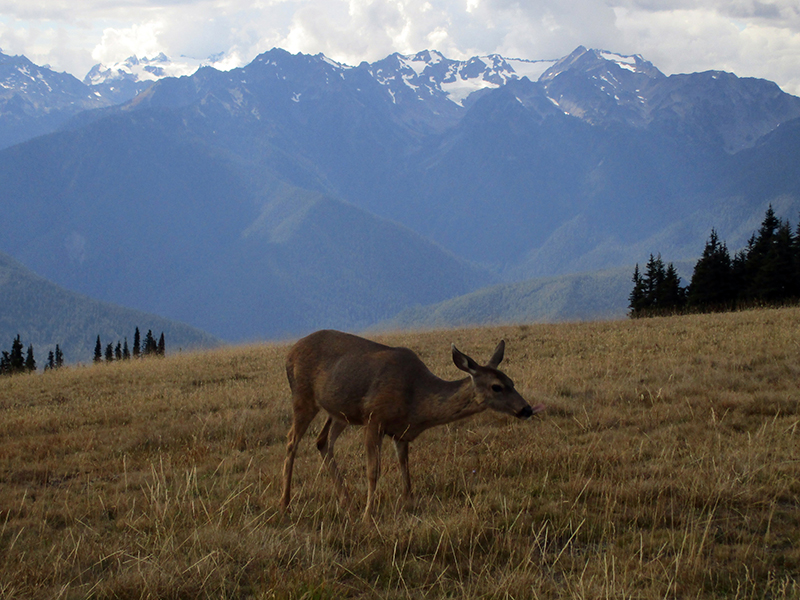 The following day we drove east to the Hurricane Ridge area. Perched atop a 5,000-foot-high mountain ridge, the Visitor Center’s back patio offered stunning views of the snow-capped Olympic Mountain Range across the Elwha River valley. Black-tailed deer browsed in the sub-alpine meadows near the road. 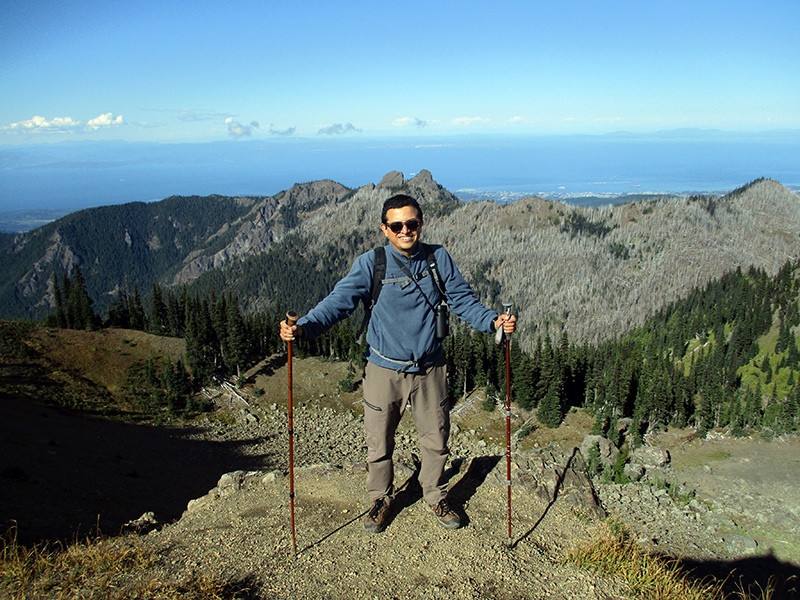 We relished the breathtaking vista during our picnic lunch and then continued up to the end of the road to hike the Hurricane Hill Trail (yet another one of our favorite Project 100 hikes). At 3.2 miles round-trip, it featured a gentle climb to a lookout with panoramic views of both the Olympic Mountains to the south and the Strait of Juan de Fuca below to the north, with Victoria, British Columbia, across the water. The hike was simply stunning. 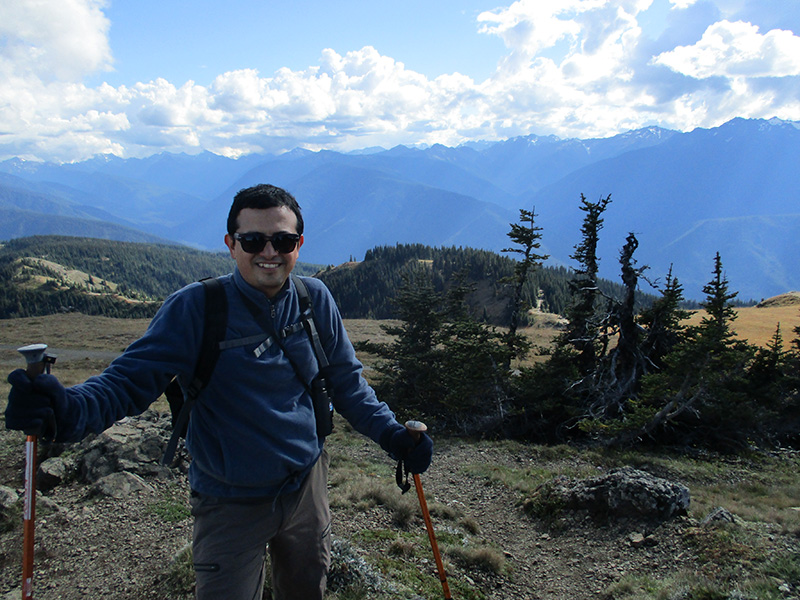 Also of visual interest here are the Douglas-firs and other evergreens that dot the meadows on the hillsides. Over the years, the fierce winds to which Hurricane Hill owes its name have twisted, stunted and sculpted the trees into unusual shapes. 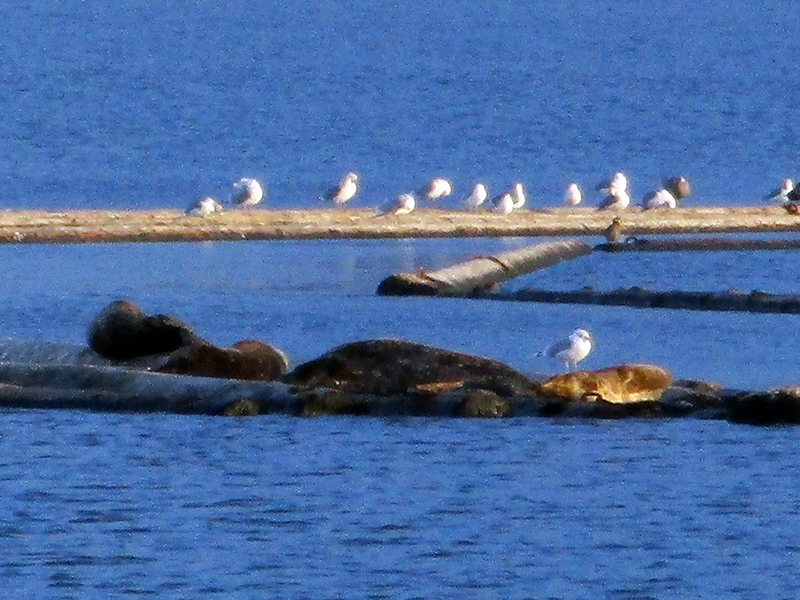 Later in the afternoon, we drove down the mountain to the town of Port Angeles just outside the park on the north coast of the Olympic Peninsula. Our destination was Ediz Hook, a skinny strip of land that juts out into the Strait of Juan de Fuca to form Port Angeles Harbor. A park ranger told us it could be a good place to find harlequin ducks, whimsically patterned birds we’d been searching for since Glacier National Park. We parked along the road near a collection of what looked like sandbag-covered logs in the water. Scanning with our binoculars, we soon realized that the sandbags were, in fact, harbor seals! We continued scanning the water and, to our delight, found a group of harlequin ducks and surf scoters mixed in with an array of gulls. What a treat!

And even more water-bound treats awaited us in nature’s treasure chest; the adventures continue in the next segment.

9 thoughts on “Olympic-sized Treasures in Washington”