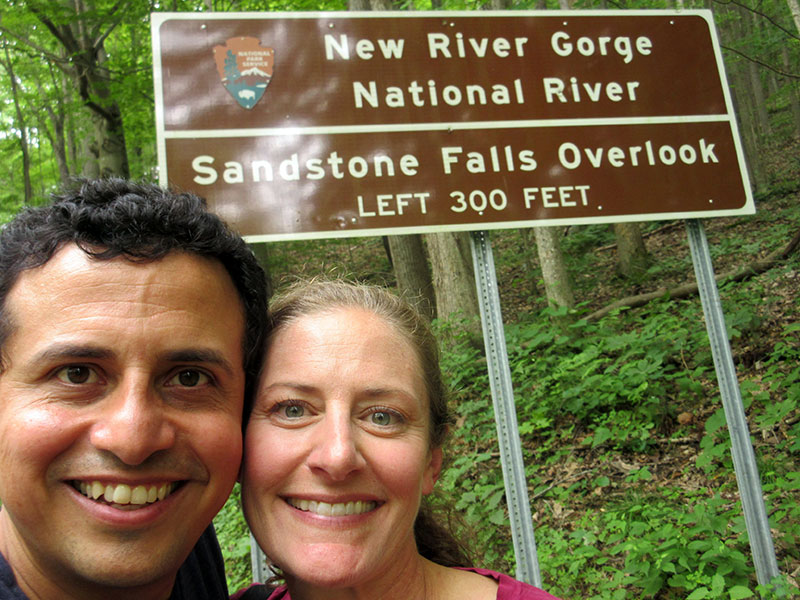 Moving into West Virginia from Virginia, the terrain became steeper and rockier. We took the road that followed the New River to get two adjacent National Park sites, the New River Gorge National River and the Bluestone National Scenic River. We chose to use Bluestone State Park’s Meador Campground near the town of Hinton as our base for exploring both of the national parks. Upon entering the turnoff to the campground, we saw a turkey hen with about ten baby turkeys in tow, followed by several deer that blinked at us as we drove by but made no effort to scamper off. We knew this would be a great place for wildlife.

The campground sits on the forested banks of Bluestone Lake where the New River and Bluestone River meet. We set up our tent in a shady clearing next to a thicket of trees and tall bushes, and as we did so the other campers stared at us mutely as if the Arizona license plate on our car made us something exotic. A few kids circled around on their bikes, checking us out but not returning our waves or hellos. Later in the bathroom as I brushed my teeth, a woman and her two daughters stared at me without smiling and merely nodded in response when I bade them goodnight. We didn’t know what to think.

The next day we awoke to a loud chorus of cardinals, robins, American redstarts, thrashers, gray catbirds and cedar waxwings right outside the tent. They feasted on ripening red berries on the bushes at our campsite, and they continued to flit in and out as we had breakfast. (We were delighted until later in the day, when we saw all the red bird poo on the tent.) Then a small herd of deer came through camp munching on their own breakfast.

As we inflated our kayaks at the boat launch, a fisherman warned us that boaters out the Bluestone Lake on the other side of the bridge often had little respect for non-motorized craft. He recommended that we paddle upriver instead, which turned out to be a delightful trip. We went quite a way up the river’s fairly shallow, gently flowing course through pretty forest with occasional rock overhangs.

Eventually we came to a stretch of mild rapids and took several turns navigating through the faster water and maneuvering around rocks. Ultimately we opted not to continue upriver beyond the rapids but instead had a lazy return trip downriver, seeking the shade at the water’s edge and spying several deer and a yellow-billed cuckoo along the way.

Back at camp as we had dinner, we could hear a ruffed grouse drumming in the woods nearby, and fireflies began to blink on and off in the grassy areas of the campground. The next morning, we woke up at dawn to check out the singing birds. Even more interesting, however, were the fish splashing and thrashing in the river, similar to the shad spawning in the Delaware River two weeks earlier. We supposed that these ones were channel catfish based on our conversation with the fisherman the day before.

A History of Mining

We stopped in at the New River Gorge National River Visitor Center and learned from the interpretive displays about the history of the area. This being West Virginia, coal mining has played a major role in the area. It was here that the legend of John Henry — who pitted his strength against a steam-powered hammer in to dig a railroad tunnel — took shape.

From there we headed to the Grandview section of the park. We hiked along the Grandview Rim Trail high above the New River with the intention of climbing the 150 steps up to the Turkey Trail overlook for what could have been spectacular views, but it was closed due to fire damage. We had little time to regret the closure, however, because thunder cracked overhead and sent us scurrying back to the car. We soon got drenched, and the downpour made visibility very limited as we drove back to Bluestone State Park. The rain continued all night long.

The next day dawned with a thick mist hanging over the forest. We heard loud crashing in the forest and surmised they were trees giving way from the previous night’s storm. When the sun emerged later in the morning, we discovered that several trees had fallen across the Bluestone Turnpike Trail, which we followed along the Bluestone River from our campground through state park land and over to the National Scenic River section. We heard more crashing in the woods as we walked and hoped no trees would fall on us during our hike. (All of our rain was just the beginning. One week later, torrential rain and devastating floods killed more than 20 people and destroyed 1,200-plus homes in West Virginia.)

Despite the mud — or perhaps because of it — we encountered a host of frogs, turtles, crawfish and snakes, making this one of our best “animals galore” hikes ever. At one point we stopped at the riverside to take a break from the heat and humidity of the afternoon. As we sat relaxing and taking photos, Hector noticed a large snake sunning itself on a rock in the water just a few feet away. We quickly moved on.

More wildlife awaited us at the campground. We watched wood ducks teaching their ducklings how to maneuver in the river, and after dinner, the fireflies began twinkling up in the trees. As I brushed my teeth in the bathroom, a tiny green frog peered up at me from the sink before hopping onto a shelf to get a better look at me. Another tiny frog hopped into the shower with me, and I then felt something biting me above the ankle as the water poured from the broken-off shower head. At least it was hot water, and I’ve learned to accept the hygiene challenges of so much camping this year. I’ve also gotten pretty good at balancing on one foot as I dry off and dress so the towel and trouser legs don’t touch the dirty shower floors.

The next day, after another night of pounding rain, the sun came out and we drove to the Sandstone Falls section of the New River Gorge. We first hiked the Big Branch Trail that led uphill through thick forest past numerous waterfalls. The path was slick and the air teemed with gnats and mosquitoes, and the trail then descended into more open forest with fewer bugs. In winter this trail offers fine views of the Brooks Falls (really more cascades than falls) on the New River below, but this time of year the trees were too leafy for us to see much. Despite its challenges, we found this looping trail a beautiful walk and great exercise.

Wanting to see just a bit more of this section of the park while we still had a bit of sun, we drove on to Sandstone Falls. With a 25-foot drop, these falls were more impressive than Brooks Falls. Here, fishermen waded in the water to cast among the shoals in this Appalachian Flatrock habitat, a unique ecosystem hosting rare plants that grow only here. A boardwalk and looping trail led through lush forest to an island in the river, giving us nice views of the Sandstone Falls and large beaver dams in the river (although we didn’t spy any of the four-legged engineers themselves). Later in the evening we had one more night of rain, but the upside was that it cleaned all the red bird poo off the tent for us.