We’ve been asked about our best camping experience so far during Project 100, and our answer may surprise you. Worthington State Forest, on the eastern bank of the Delaware River in New Jersey, is a major contender. The state park abuts the Delaware Water Gap National Recreation Area, and the Appalachian Trail cuts through the center of Worthington. 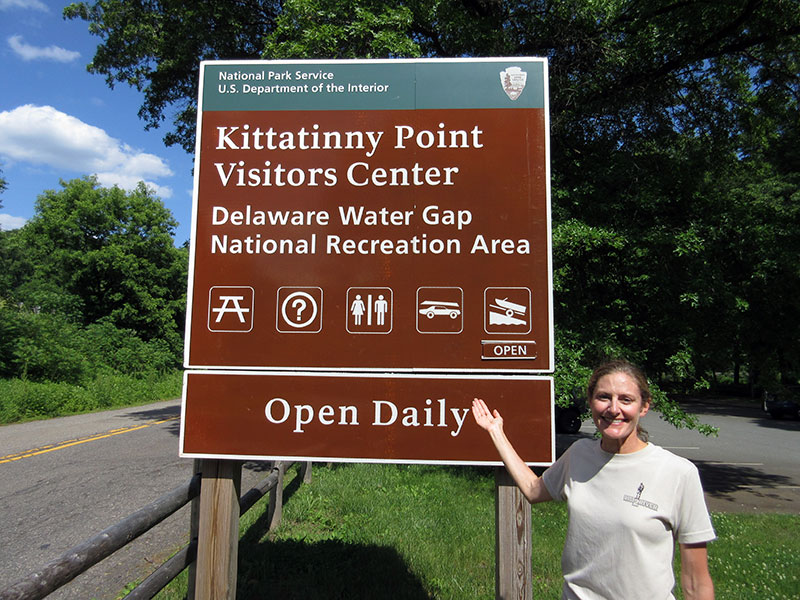 We first stopped in at the National Park Service’s Kittatinny Point Visitor Center at the southern terminus of the Delaware Water Gap. The two rangers on duty were enormously knowledgeable and friendly, giving us practical advice on where to hike and kayak during our three-day stay.

We moved on to the Worthington State Forest campground, chose a site at the base of a grassy slope overlooking the river, with chipmunks dashing back and forth through camp and a woodchuck scampering in the grass across the way. We went for a stroll and heard a loud metal clanging in the woods, then noticed a large barrel that turned out to be a bear trap. Moving closer, we saw a dark, hairy shape with a prominent snout and two beady eyes staring out at us. Later we spoke to a few other campers who told us they had seen the bear walking around earlier, and when I asked the woman in the office about it, she said they trap and relocate yearling bears who wander into camp before they make a nuisance of themselves. 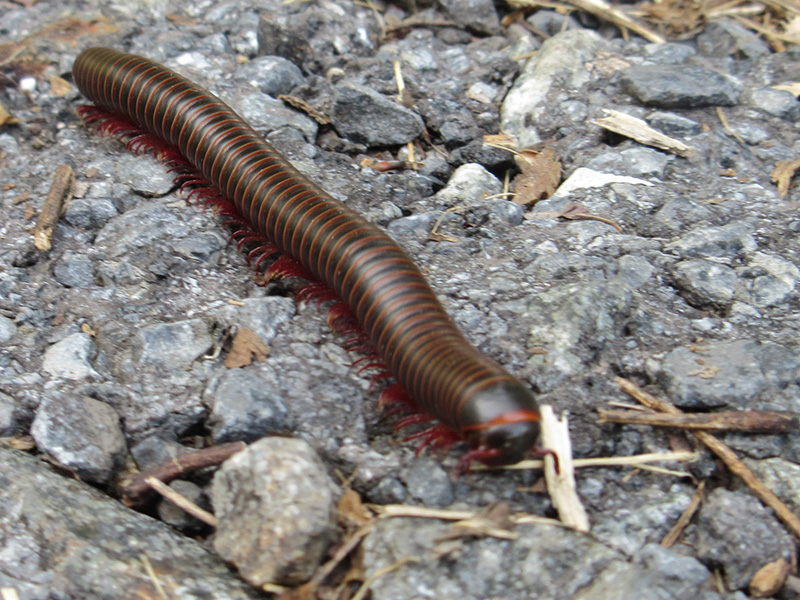 Continuing our stroll, we came across dozens of giant millipedes making their way hastily across the rocks. Later by the campfire, we could hear fish vigorously splashing about in the river. Rabbits chased each other through the underbrush, fireflies blinked off and on, and we spotted a deer on the grassy slope across the way. What a delightful wilderness experience!

Early the next morning the critter cavalcade continued as I sat in the cool shade at our picnic table and tried to get some writing done before the sun bore down. However, the racing chipmunks and rabbits, a trio of squirrels chasing each other around a tree, and birds of all sorts flitting past made it tough for me to concentrate. Hector then discovered a larger, more shaded grove hidden nearby where we moved to have our breakfast. It was one of the loveliest spots in camp, and we had to tear ourselves away to do something more active. 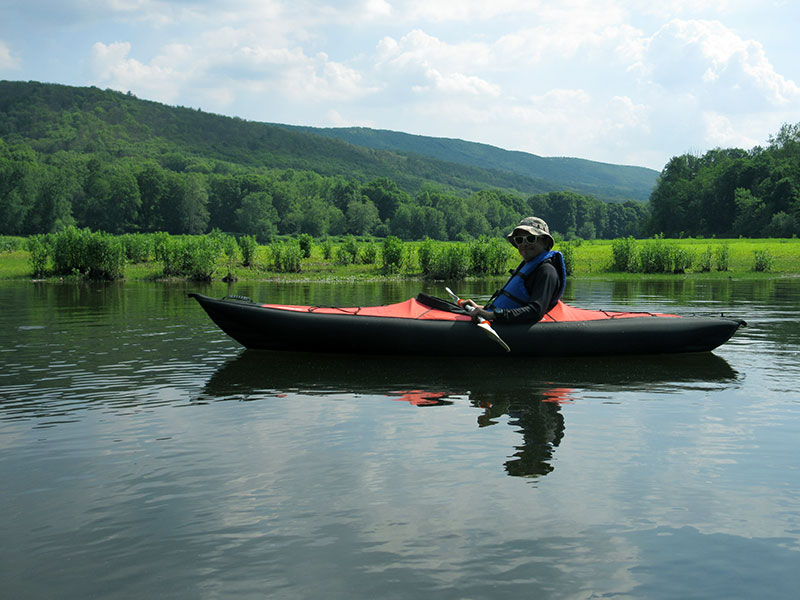 We inflated our kayaks and hitched a ride with our camping neighbors — a very nice couple from Pennsylvania with a pickup truck — to the Poxono launch site. We expected similar shallow water as in the Upper Delaware and left the fins out of the kayaks so they wouldn’t get chewed up on river rock. That made them a bit wobblier, but the gentle flow made for a superb downstream paddle. We stuck to the shade on the Pennsylvania side of the river, spotting numerous birds and floating among hundreds of shad swimming upstream to spawn. (That was what we had heard splashing around the night before, and it turns out our kayaks are now permanently stained on the bottom from shad roe!)

We passed several islands, the last of which we circled on the Pennsylvania side before realizing that we’d overshot our campsite on the New Jersey side. We got out to walk our kayaks through the shallows across from camp but soon got in water up to our waists. Now fighting a much stronger current, we had no choice but to get back in and paddle furiously across the swift-moving water to get to the bank. We made it safely but a little out of breath. 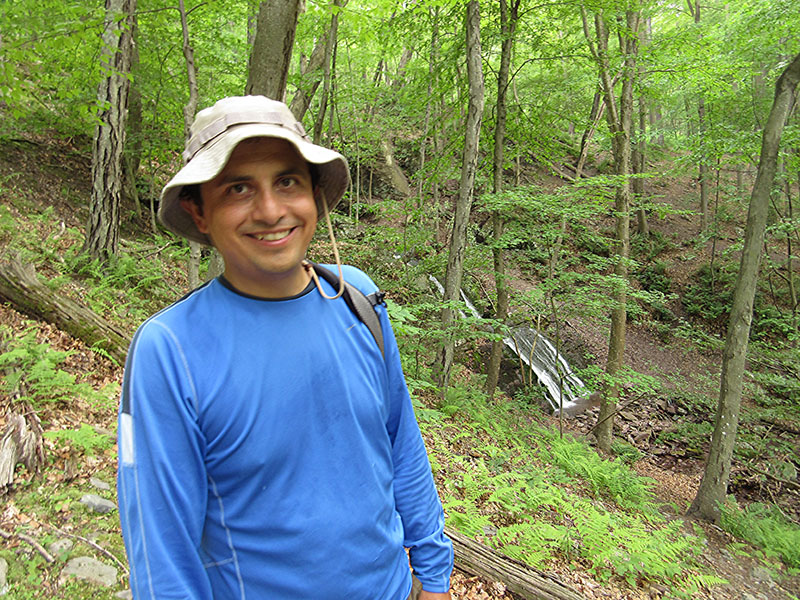 The next morning, we returned to the breakfast grove to enjoy our coffee and read while the birds and assorted rodents kept us company. Once again we had to tear ourselves away to go for a hike. We walked from the campground to the nearby Douglas Trail, which is named for U.S. Supreme Court Justice William Douglas. He hiked here in 1968 and became an advocate for protecting this beautiful natural area instead of allowing it to be submerged in the proposed (and thankfully scuttled) Tocks Island Dam Project. Such a project would have put more than 12,000 acres of wildlife habitat and historic structures under water. The dam also would have interrupted the flow of the Delaware River that remains unimpeded today along its 330-mile course from Hancock, New York, to Delaware Bay.

The Douglas Trail led steeply up to connect to the Appalachian Trail, which we took to Sunfish Pond, a pretty glacial pool at the top of Kittatinny Ridge. There we met several hikers, two of whom were middle-aged guys traversing the Appalachian Trail. They started in Georgia in March and planned to see it through to the end of its 2,000+ miles at Mt. Katahdin in Maine. We couldn’t believe how small their packs were, and the one guy remarked, “Nearly everything in life costs you more when it weighs more, except for backpacking equipment. If you want to travel light, you’ll pay a pretty penny for your gear.”

Prior to meeting these guys, we had become a little smug about how light we were traveling — with our inflatable kayaks and life’s basic necessities in the Prius — compared to most of our fellow campers in their huge RVs. The folks hiking the Appalachian Trail put us to shame. 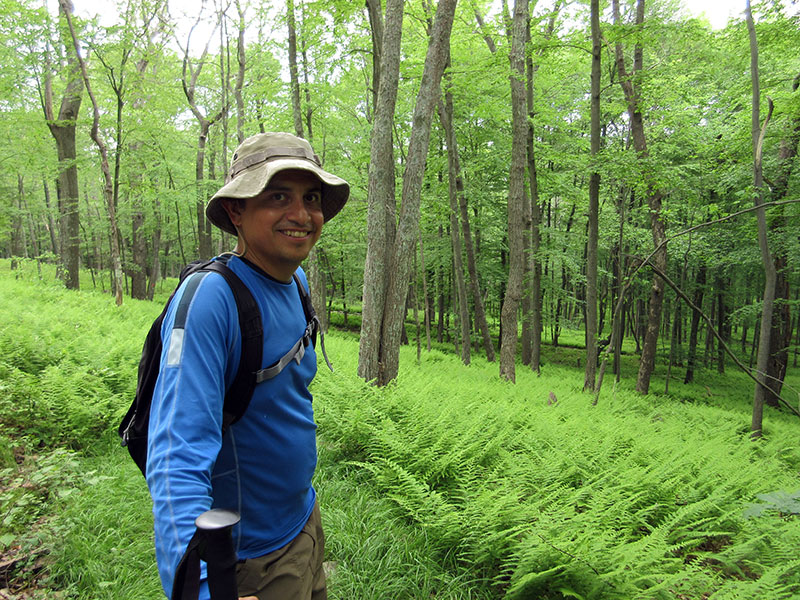 We looped back down the mountain along the heavily wooded Garvey Spring Trail. As it descended, we came to a stretch resplendent with ferns. I had never seen such a ferny forest in my life, and it felt like walking through a sea of green waves gently swaying in the breeze. 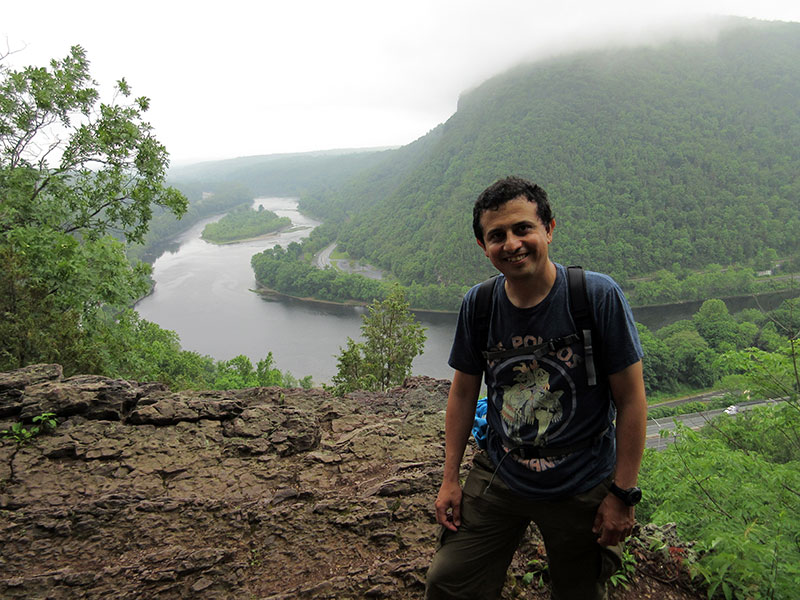 Another wonderful hike was the Red Dot-Blue Blaze-Appalachian Trail Loop. The boulder-strewn Red Dot Trial climbed sharply up until it came to a marvelous overlook of The Gap, where the Delaware River flows through the mountains in an S-shaped pass. With New Jersey on one side and Pennsylvania on the other, it’s an intriguing area. 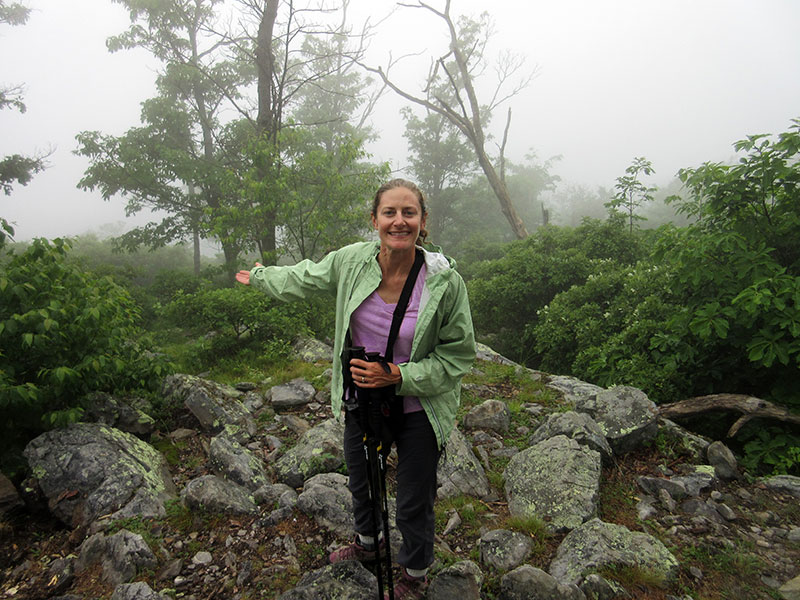 We continued up the trail to the top of Mt. Tammany — at 1,526 feet, New Jersey’s fourth-highest peak. From there, another Gap lookout exists, but by the time we reached that point, the mountain had become too misty to see anything but the forest immediately in front of us. Nevertheless, we saw and heard a great many songbirds among the pines, oaks and mountain laurels. This misty patch of woods made for a most enchanting hike. 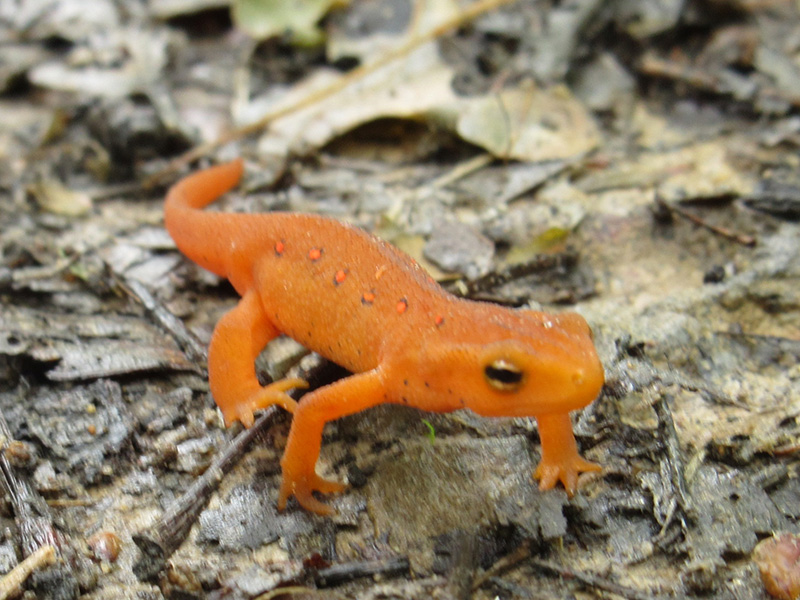 The mist cleared on the gentler Blue Blaze Trail descent, and Hector spotted a bright orange Eastern newt. As the trail joined Dunnfield Creek at a waterfall and then connected to a short stretch of the Appalachian Trail, it became thick with vegetation and the aroma of moist earth. 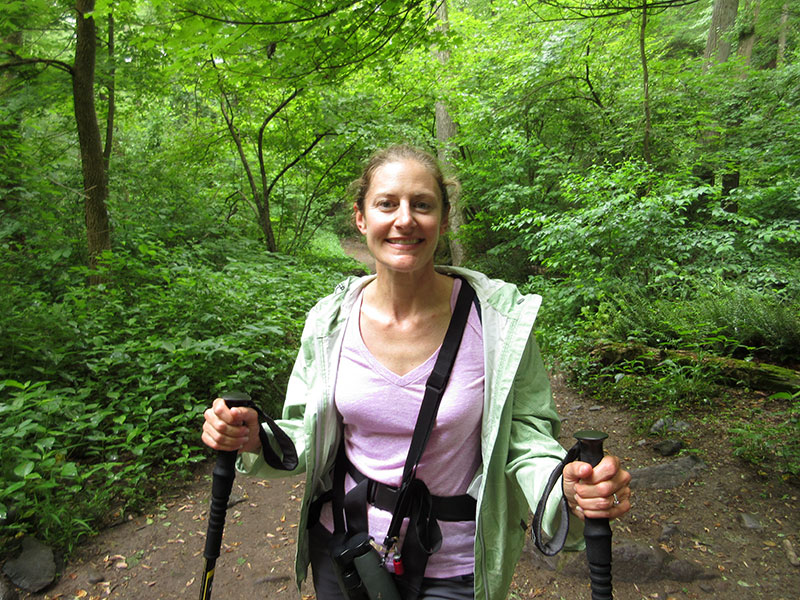 We felt like we were trekking in a jungle somewhere in the tropics; maybe this corner of New Jersey is where the nickname Garden State comes from. Numerous signs in the parking lot and at the start of the trails warning about car break-ins, however, remind you that you are in New Jersey. Nevertheless, the lovely campground, fantastic kayaking, exhilarating hikes and plethora of wildlife made the Delaware Water Gap one of our favorite overall camping experiences.