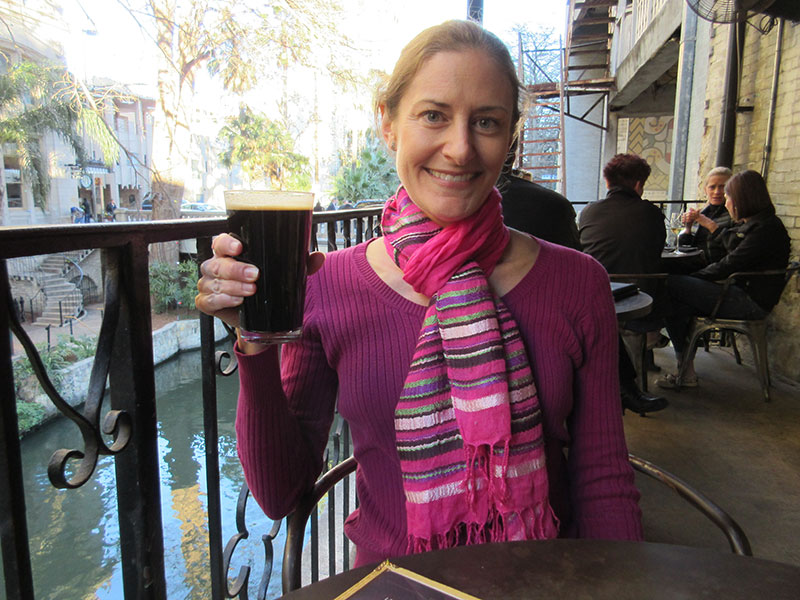 Needing a few city days after our trip to Big Bend, we arrived in San Antonio at our motel on the non-touristy side of I-35 (meaning cheap room rates but kind of sketchy with a lot of vagrants milling about) within walking distance of the famous downtown River Walk. We strolled along the River Walk for a few hours before finding a suitable perch one story above river level at the historic Esquire Tavern that was established six years before the River Walk was created. We had a relaxing dinner and watched the tourist-laden Rio Taxi boats float by below, then set off on foot again to take in the long loop past the boisterous chain restaurants and bars, admiring the lights reflecting on the water.

It’s amazing that we saw no one fall in the river, given that only certain small areas have a barrier and the sidewalk can become quite crowded with diners and drinkers standing perilously close to the water’s edge. We called it an early night and crossed through the Mexican-flavored Market Square area and back through the homeless underpass to our hotel. 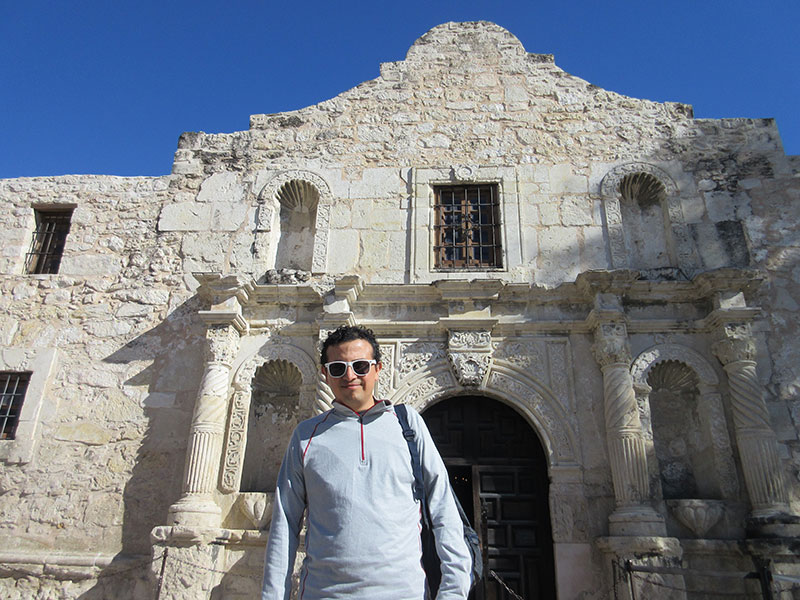 The next day we went to San Antonio’s other must-see attraction, The Alamo. Over the years it has served as a mission, a fortress, a battlefield, a warehouse, and now a shrine to defenders in the 1836 Battle of The Alamo, a key moment in the Texas Revolution. Like the Battle of Puebla (of Cinco de Mayo fame), it was one in which the Mexican Army won the battle but ultimately lost the war. You can read more about The Alamo here.

We followed that walk down history lane with a stop at Texas A&M University San Antonio’s Centro de las Artes museum for two Mexican-themed exhibits. One was “Trees of Life” by Mexican ceramicist Veronica Castillo and American painter Kathy Sosa, and the other was “Nuestra Gente” by local artists Carolina Flores and Mario Garza. Both exhibits reinforced that this little corner of Texas still has a strong Mexican accent even though it is no longer technically part of Mexico. 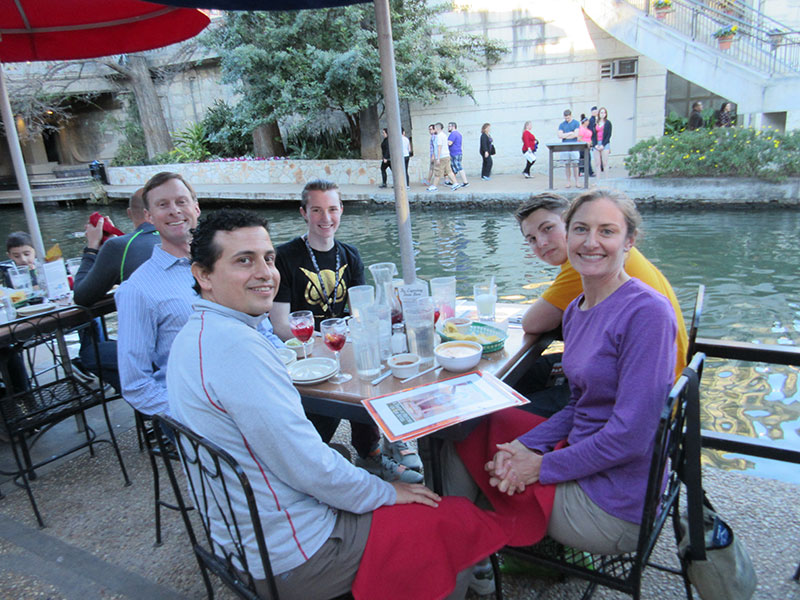 In the late afternoon we met my brother Matt, nephew Tyler and his friend Hunter, who were in town for the PAX gamers conference. We found a riverside table for dinner at Casa Rio, a family-run place with a long history on the River Walk with strolling mariachis who performed for us, courtesy of Matt. A little more waterside strolling along the nicely landscaped path and we were ready to head back to the poor side of the highway. 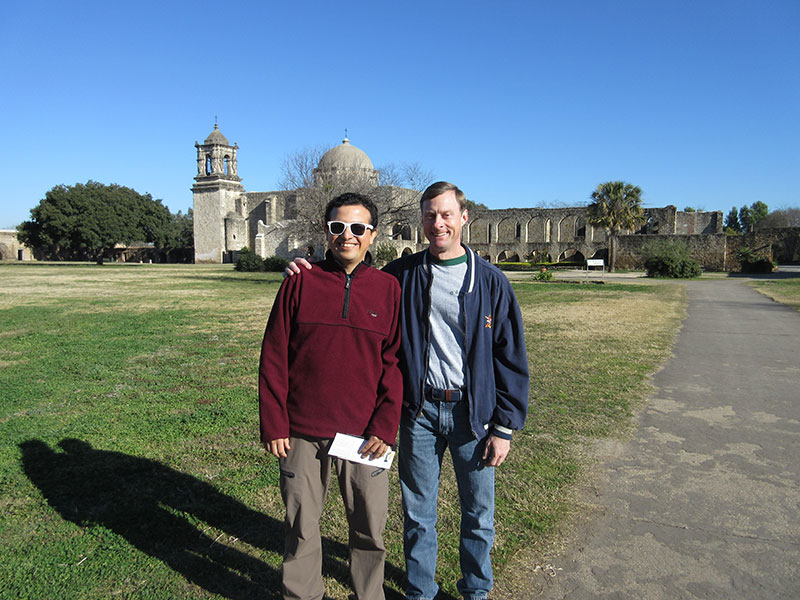 The next day we met Matt at Mission San Jose, one of five missions established by Franciscan friars along the San Antonio River in the early 1700s. The missions now form San Antonio Missions National Historical Park. An introductory video and exhibits showed that native groups collectively known as Coahuiltecans not only were converted to Catholicism but also were convinced to build all the stone structures here. Mission San Jose included outer walls of the compound within which the natives lived in small apartments, and a church, convent, granary and mill. The outer walls protected the inhabitants from Apache and Comanche raiders, but mission residents did venture outside to grow crops and raise cattle. To water the crops and grind grain they diverted the San Antonio River in an ingenious system of aqueducts and irrigation canals called acequias.

Matt returned to downtown and we continued on solo to the smaller Mission San Juan in a more rural setting south of Mission San Jose. It was a delightful spot with trails that wound through the riverside woods, the perfect place to enjoy a sunny and crisp Saturday morning.

We drove north to our next city destination. Upon checking in at our Airbnb in the Clarksville neighborhood, our hospitable host, Bryan, opened a bottle of wine and gave us the low-down on what it’s like to live in the Texas capital and advice on how to spend our two days there. 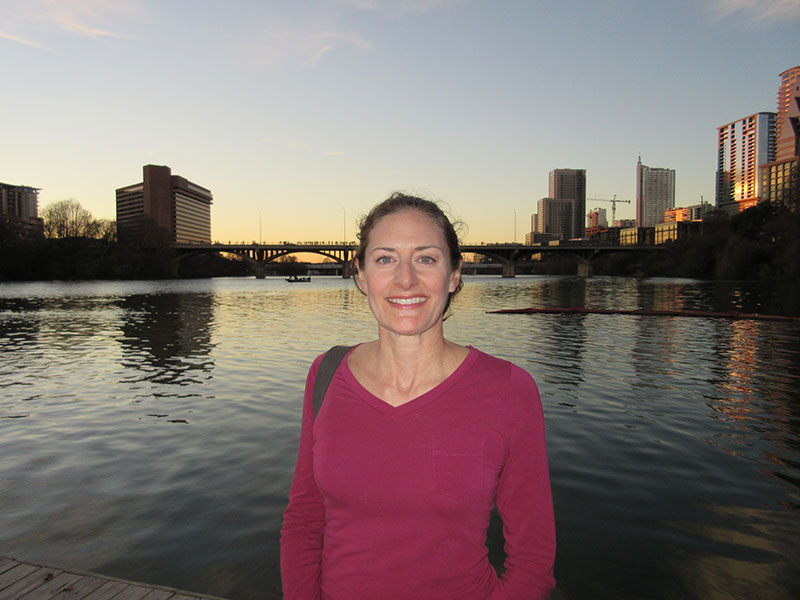 We then set off on foot towards downtown and along the shore of Lady Bird Lake, eventually coming upon Rainey Street, one of Austin’s several hotspots full of bars and restaurants in full swing on a Saturday night. We stopped in a little bit north of there to fill our bellies with smoked meat at Stubb’s, an Austin BBQ and live music landmark. Instead of waiting for the music to start there we wound our way over to the basement club The Elephant Room for some live jazz. We arrived early but the place quickly filled to capacity, and when we left shortly after 11 p.m. people were lined up along the stairs and out on the sidewalk waiting to get in.

As we strolled back home along Sixth Street — a long stretch of dining, drinking and dancing establishments — the crowds of young, hip and beautiful that spilled out seemed enormous. This is definitely a town for millennials with money. 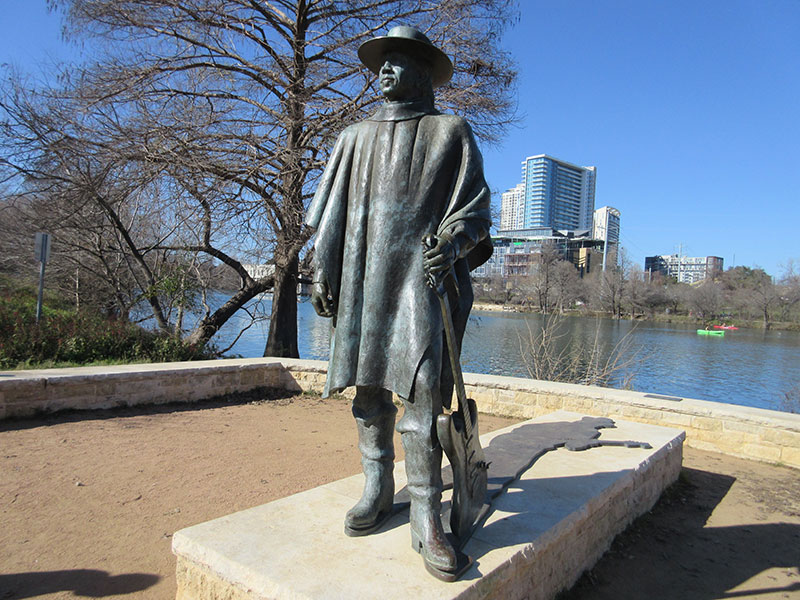 On Sunday we picked up some picnic supplies at a neighborhood grocery and walked down to Zilker Park just across the lake (formerly called Town Lake and also known as the Colorado River) from downtown. Everyone else had the same idea. The paths were jammed with people out biking, jogging and pushing strollers, and kayakers and paddleboarders filled the lake. Either the previous night’s revelry had no effect on the young, hip and beautiful or this was another set of active Austinites entirely. Despite the crowds we managed to find a few people-free moments to pay our respects to the late, great Stevie Ray Vaughan, who built his career as the world’s greatest blues guitarist (and no one can convince me otherwise) in Austin. 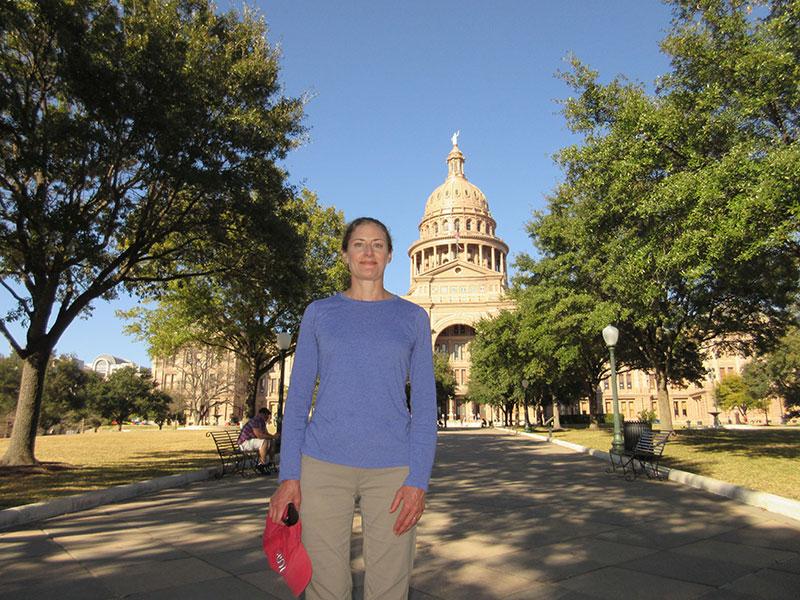 After our picnic we toured the Capitol building to see the impressive rotunda and Texas House and Senate chambers. Senators clearly have nicer digs than representatives. It dawned on me when looking at the framed old photos of elaborately mustachioed elected officials from the 1800s that some of these guys would be perfectly at home as hipsters walking on the streets of Austin today. 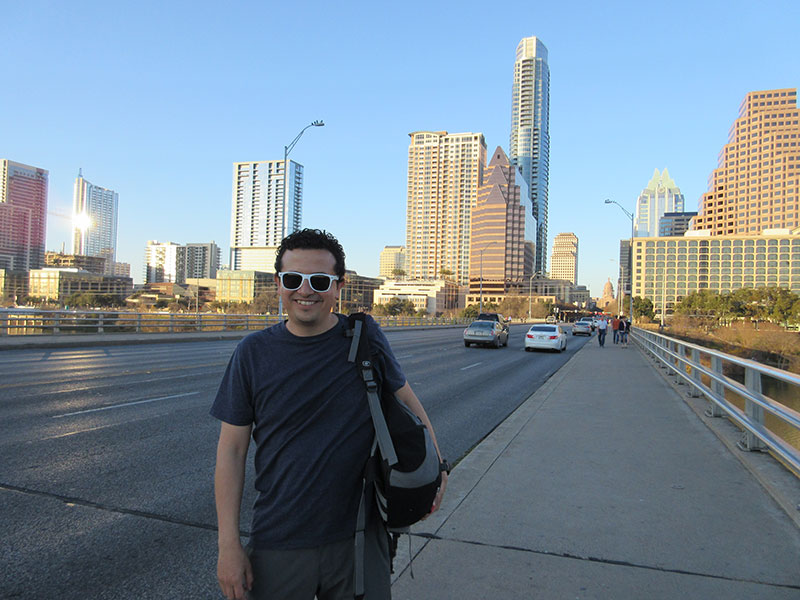 In late afternoon we crossed the Congress Avenue Bridge to walk along the south lake shore to the east. All along the water’s edge we saw a multitude of turtles sunning themselves on snags of trees. And turtles aren’t the only plentiful wildlife here in town. We returned to the bridge in time to catch the nightly spectacle of bats leaving their daytime roost at dusk to keep the city’s insect population in check. Austin is the self-proclaimed “Bat Capital of America” (or is it the world?) and has done much to protect the local bat population. As we waited on a small patch of lawn we didn’t expect much of a show, this not being summer — the height of bat season. However, once they finally emerged, the bats streamed out in a thick ribbon for nearly 20 minutes before the light faded and we decided to head back to our Airbnb.

And with that, our brief city spell has come to an end. Stay tuned for our next post recapping a reroute down to Padre Island National Seashore to avoid the predicted nasty storm headed for what we thought would be Chickasaw National Recreation Area and Hot Springs National Park. We’ll have to pick those parks up later in the journey.