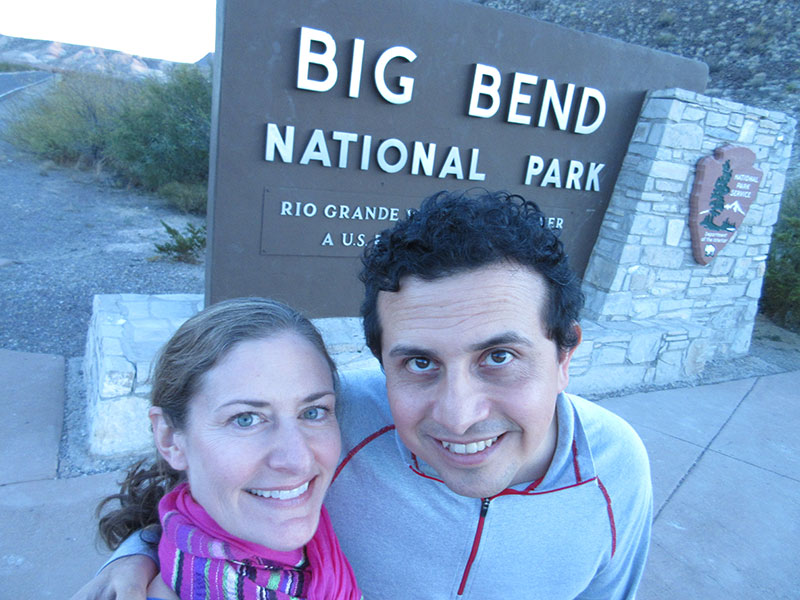 We survived our first national park foray of Project 100 with four days in Texas’ Big Bend National Park, which had cold-weather forecasts making us nervous before we left Phoenix (more on that at the end of this post). We spent most of our time in the Chisos Basin area, an incredibly scenic part of the park famous for striking rock formations, where we camped and hiked several trails.

We didn’t realize just how scenic it was, however, because we arrived at nightfall and had to hunt around a bit to find our reserved campsite. Happily the full moon made setting up camp a bit easier, and as we sat on a boulder by our tent we enjoyed the magic of a quiet, moonlit camp encircled by towering stone. It was well worth two long days of driving (and two difficult weeks of final packing and preparations) to get there. 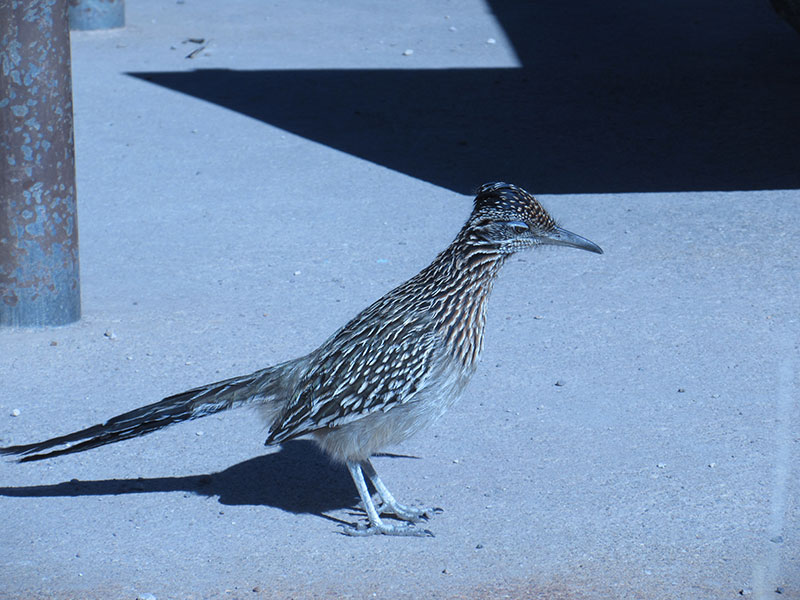 We awoke to an array of stone buttes, spires and pinnacles and were even more impressed by the gorgeous setting in the daylight. And we had a visitor. A curiosity-seeking roadrunner strutted through our campsite each day, cocking his head up at us for a handout (sorry, fella, that’s against the rules!) before heading off to try his luck with other campers.

The Chisos Basin campground facilities are top-notch: clean (and heated!) bathrooms, shade pavilions, and large-capacity bear boxes. Those were a necessity, and not just for hungry roadrunners. Signs everywhere warn of bears, javelinas, and mountain lions that frequent the area. We learned what do when approached by a mountain lion: pick up small children (better yet, the signs said, don’t hike with them at all), avoid running, wave your arms, shout, throw rocks, and fight back vigorously. We weren’t sure how vigorously we’d be able to fight off a mountain lion, so Hector was a bit nervous on all of our hikes. 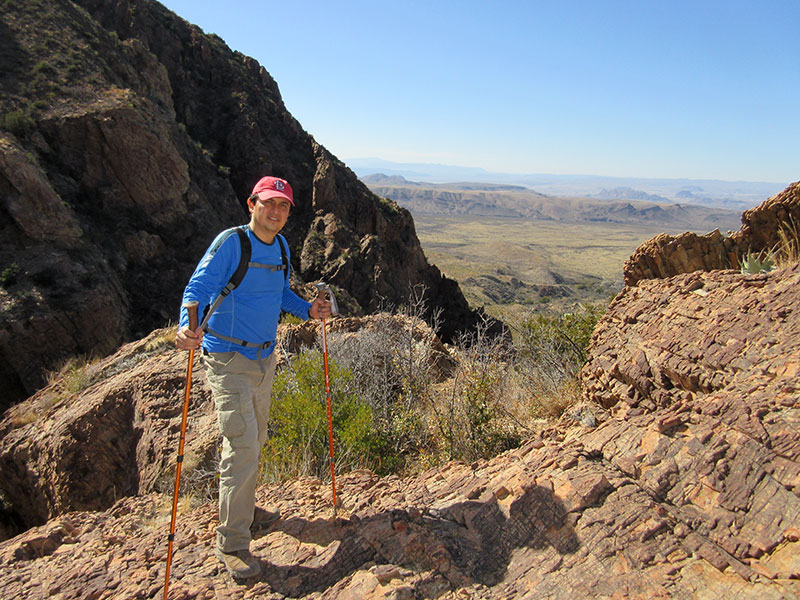 Trails are well-marked and well-maintained, however. We hiked the Window Trail through a short canyon to a pour-off at the bottom of the basin that affords fantastic views of the valley below. Later that night we attended a ranger talk at the amphitheater about rattlesnakes as well as general natural history of Big Bend. Ranger Christina told us that out of all the national parks, Big Bend has the highest diversity not only of reptiles but also of birds, bats and butterflies. 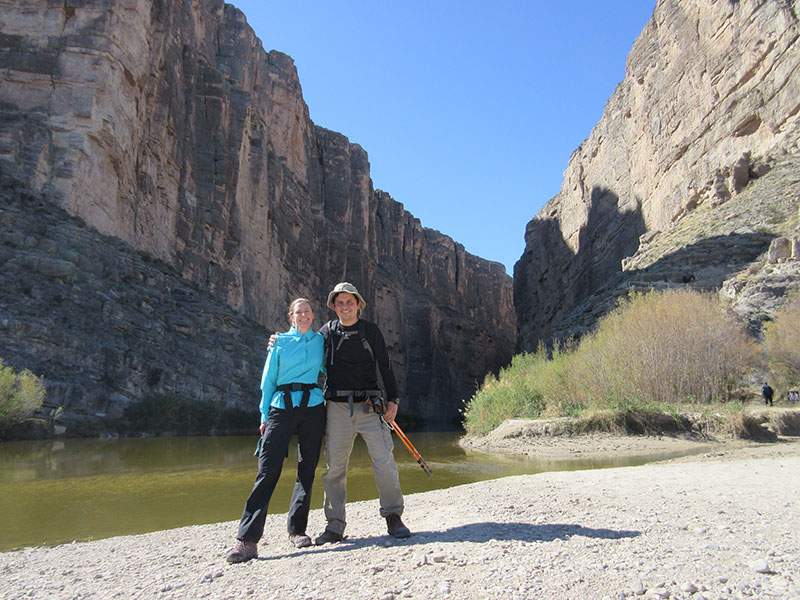 The next day we took the Ross Maxwell Scenic Drive over to Santa Elena Canyon, where the Rio Grande doesn’t seem very grande but cuts a narrow channel through the rock separating the United States and Mexico. We hiked back as far as we could go along the U.S. side of the river, and at one point the flow was so calm and smooth that it created an optical illusion, making the steep canyon wall on the Mexico side look like it plunged into an abyss like in Indiana Jones. Now it was my turn to be nervous. 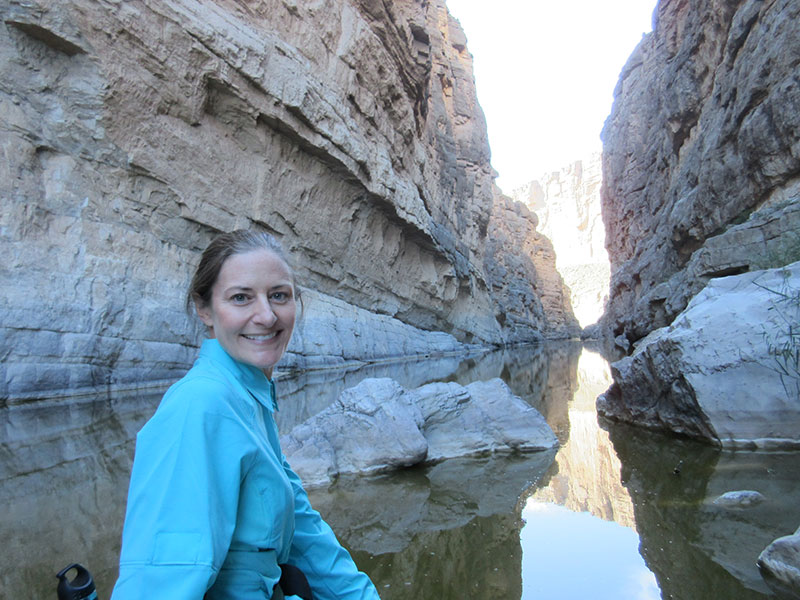 It was interesting to contemplate that this narrow stretch of river is all that divides our two countries, and of course what unites the two countries as well, like a zipper. It’s possible to kayak and raft the river, and we did see one guy loading up a kayak after paddling upriver, but signs warn against touching land or disembarking on the Mexico banks because technically that’s an illegal border crossing. 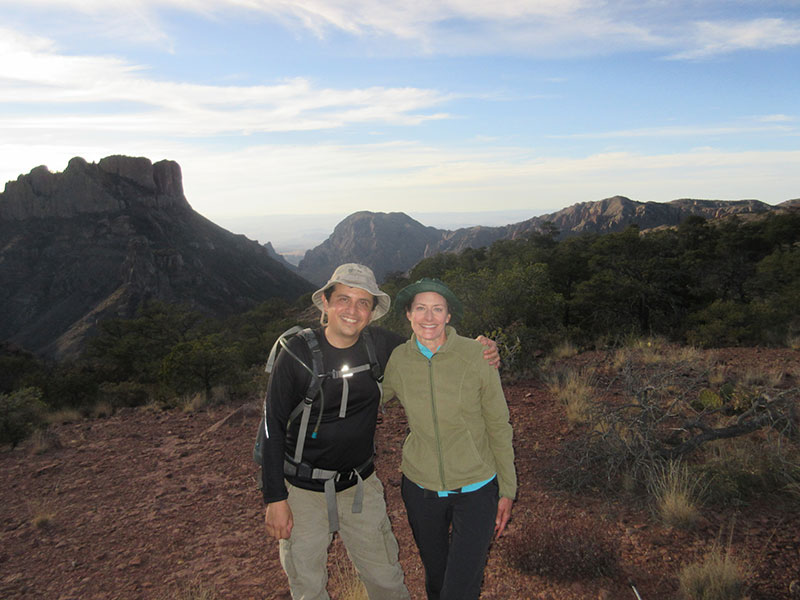 We drove back to the Basin later that afternoon and hiked up the Lost Mine Trail, which had a nice elevation gain through scrub-oak forest. The trail climbed above the iconic Casa Grande rock formation, which counterbalances the Window pour-off at the opposite end of the basin. The warm day turned cool as we descended, as always on high alert for large, menacing mammals.

On our final full day in the park we awoke to the tent fly flapping madly in the wind and clouds chilling the high-elevation air. We decided to set off for one more Basin-area hike to loop around and take in scenery on the inside and outside of the basin. We headed up the steep Pinnacles Trail, connected over to get a glimpse of sunny Boot Canyon and circled around to the Colima Trail through a wonderful patch of pinyon-oak forest with fallen leaves and crisp air. 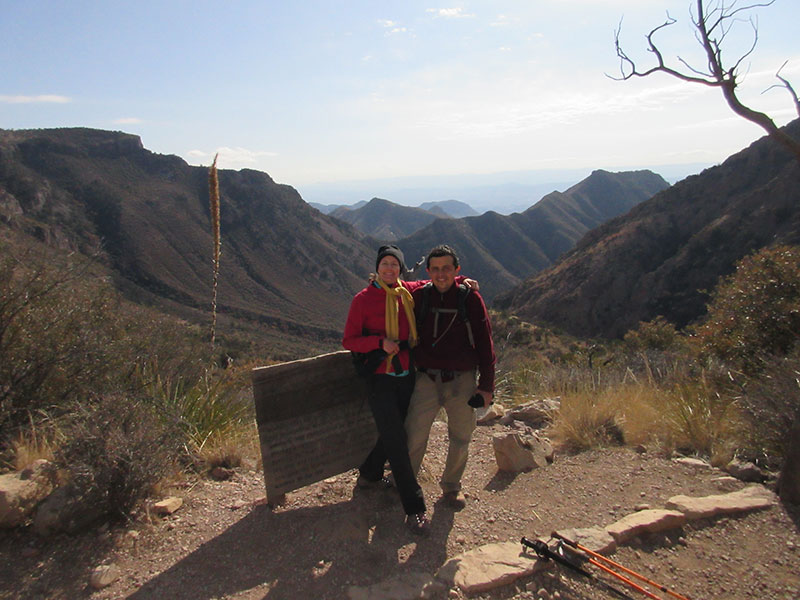 We topped out into our final patch of sunlight near an overlook and sign commemorating the human-caused Blue Creek Fire of 1989. That sunlight quickly disappeared as we headed down the Laguna Meadows Trail. Fog rolled in, and as we descended, big, fluffy snowflakes began to fall. The snow was dry and didn’t stick, but the temperature steadily dropped and the wind chapped our faces. By the time we finished our roughly 10-mile hike we were foot-weary and chilled to the bone.

Back at camp, realizing that we’d never keep our camp stove flame going to cook dinner, we opted to dine at the lodge restaurant just up the hill. What could have been a gorgeous view of the sunset from the dining room window was completely obscured by fog, but at least we were able to warm up enough to face our final night of camping.

That cold-weather forecast we feared had finally come to fruition. It’s one thing to imagine cold temperatures, but the bodily experience of freezing wind and fog is another thing entirely. Thank goodness there was no rain. However, we figured we wouldn’t get one wink of sleep with the noise of the tent being blown about, so we piled our sleeping bags into the back of the Prius with the seat folded down. We fit, but only just. As we tossed and turned, we set in motion beads of condensation that dripped from the back window onto our heads, and we both had to fight occasional feelings of claustrophobia. Perhaps it would have been better in the tent after all. 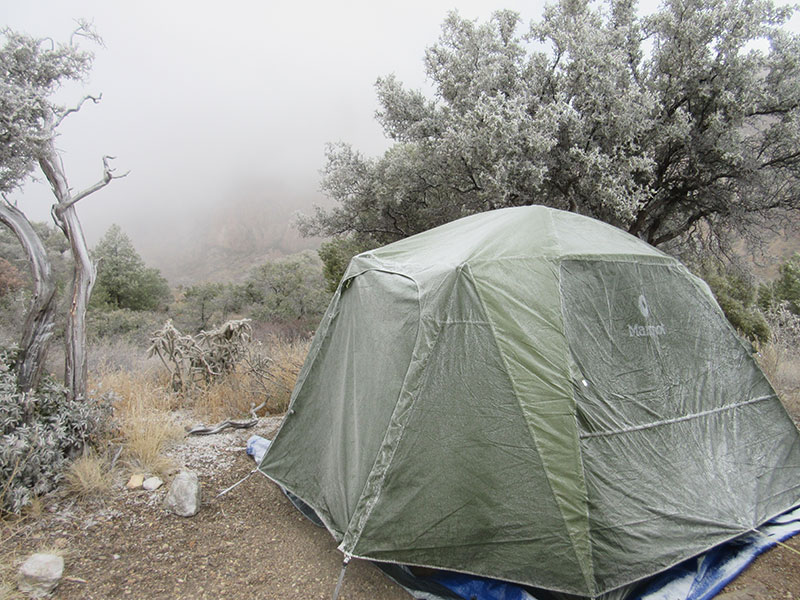 Or maybe not. Everything was frosted over — the car, the tent, the bear box, trees and rocks, the entire Basin. The frosty landscape that greeted us upon awakening was almost as splendid as the sight of the camp in the moonlight, but the air was so cold we knew we couldn’t linger. What’s more, the bathrooms were no longer heated because the power had gone out overnight. Our magical time at Big Bend had come to a hushed end. Everyone else in camp had taken off at first light. We packed up as quickly as we could, not even bothering to eat breakfast. We did, however, stop long enough to snap one last photo. 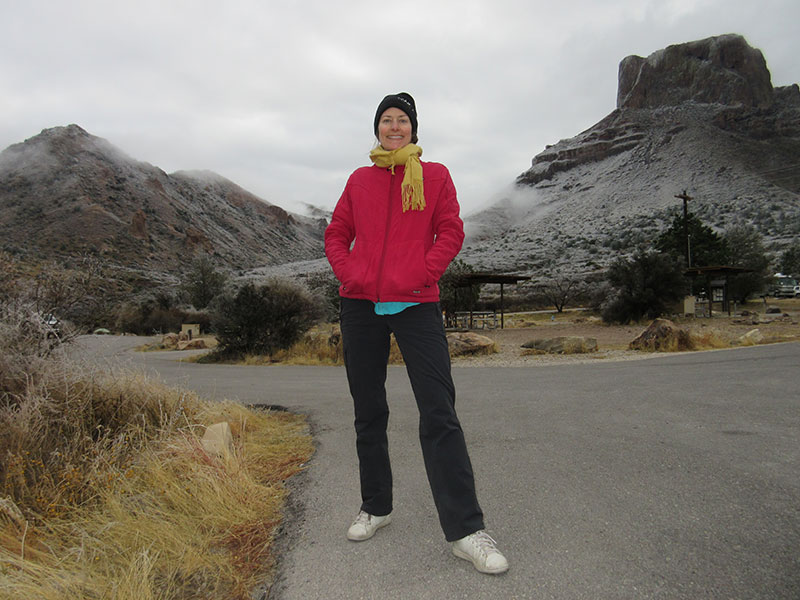 18 thoughts on “Big Thumbs Up for Big Bend National Park”