The day after our Cape Lookout excursion we had intended to take a series of ferries to the southern tip of Cape Hatteras National Seashore and drive north from there. But a storm was blowing in, making ferry departures from the Cedar Island and Swan Quarter stations iffy in rough seas and high wind. Instead we took the land route through the swampy Alligator River National Wildlife Refuge to Nags Head.

We arrived to cloudy, blustery, cold weather that cast an empty-feeling gloom on this otherwise picturesque (albeit slightly overdeveloped) beach town. Jennette Pier across from our motel looked abandoned, the beach devoid of any life save or a lonely crow picking at wet sand. Powerful waves crashed ashore and sea foam scattered and blew at the water’s edge. We could only stand to be out in the wind for only a few minutes before we were chased back indoors and crossed our fingers for better weather the next day. Rain lashed our motel windows all night.

Although the temperatures were still in the low 40s the next morning, we had a full day of sun as we drove south from Nags Head, blasting the surf music to at least make ourselves feel warmer. As we passed small beach towns on the two islands that make up Cape Hatteras National Seashore, several bulldozers moved sand spilling over from high dunes on the Atlantic side of the road. 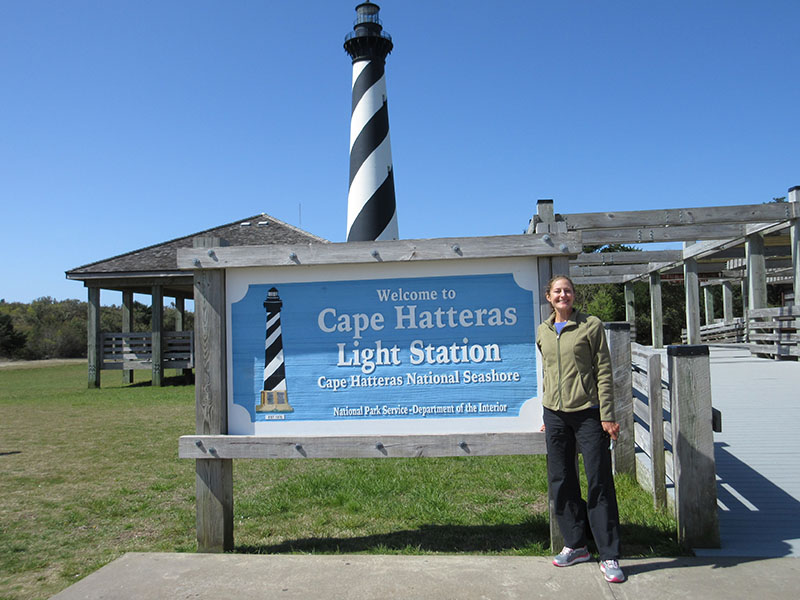 At the southern end of Hatteras Island, we stopped at the Cape Hatteras lighthouse. In 1991 the National Park Service moved the lighthouse 2,900+ feet to its present location to save it from a shifting coastline that threatened to send it tumbling into the sea. That’s what happens on a barrier island. We’d heard about the fantastic views from the top of this nearly 200-foot lighthouse (the world’s tallest lighthouse made of brick) and were disappointed to find this one hadn’t yet opened for the season, either. The same was true of many businesses. Things often don’t pick up around here until mid-May, we were told. 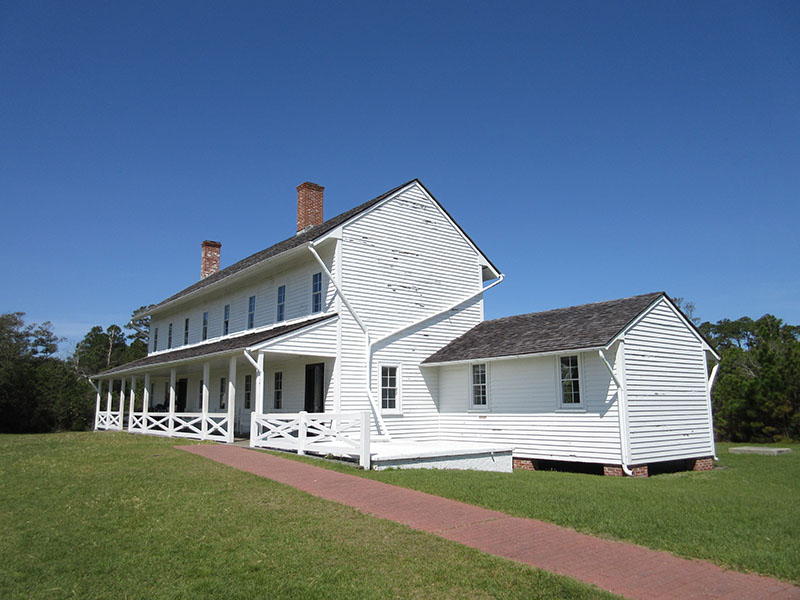 The Visitor Center exhibits made the trip down worth the effort, however. Despite the presence of several lighthouses in the Outer Banks to warn seafarers of dangerous shoals offshore, more than 600 shipwrecks have occurred here, earning the Outer Banks the nickname “the graveyard of the Atlantic.” Add to that hurricanes, storms and — during World War II, anyway — German submarines lurking underwater and sinking Allied ships, and you begin to see the Outer Banks as a menacing place for mariners. This was an apt location for the U.S. Lifesaving Service to operate until it merged with the entity known as the U.S. Revenue Cutter Service to become the U.S. Coast Guard in 1915.

We then followed our usual routine of picnicking on the beach, in this case at a spot not far away from where the car ferry boards for the island of Okracoke, sheltering between dunes to block the wind and warm up in the sun. Heading back north, we found the Pea Island National Wildlife Refuge worth a stop for a walk out to the observation tower and a check of the inland lagoons for any uncommon ducks or wading birds that might have blown in with the storm.

The highlight of the Outer Banks, of course, would have to be the beach. In spite of the cold and wind, sunny skies made for a superbly enjoyable day of driving and sightseeing. Not having grown up near the ocean or living near a beach as adults, we both relish any opportunity to linger in the sand and watch the waves roll in — a refreshing treat for landlubbers like us.

7 thoughts on “Hold on to Your Hat at Cape Hatteras”