In a refreshing and much-welcome break from our campground-and-motel life on the road, we spent a few days with my cousin, Kelly, near Charlotte, North Carolina, and are eternally grateful for the good food, hospitality and day trip to the UNC Charlotte Botanical Gardens. We also got advice on making the most of our onward trip over to the coast to explore the state’s Outer Banks.

To get situated we spent two nights at Croatan National Forest’s Cedar Point Campground, which sits in a tidy patch of woods among the coastal salt marsh not far from the Camp Lejeune Marine Base. The first evening we went for a sunset walk on the boardwalks of the nearby Cedar Point Tidelands Trail and watched oysters below squirting water at low tide. It was a great birding spot, so we agreed to return the next morning. Back at camp at nightfall, we heard the rather delightful sound of a whippoorwill calling, followed by the rather frightful sound of booming heavy artillery training at Camp Lejeune in the distance. Eventually the booming ceased so we could get some sleep.

The next morning after a quick walk on the Tidelands Trail, we drove out to Harker’s Island where the Cape Lookout National Seashore Visitor Center is located. Cape Lookout itself sits three miles offshore at the southern tip of the South Core Banks. As we were buying our tickets for the tiny passenger ferry, the captain convinced us to join the immediately departing boat rather than wait for the next one. Apparently they like to whisk people on board as soon as possible. A vehicle ferry that departs farther north from the town of Davis transports cars, but there are no paved roads on the island and a Prius is not a suitable beach buggy, so we hurried on board.

We trudged over to the Atlantic side of the island for a picnic lunch on the beach, then strolled south to look for shells. Reportedly some of the world’s largest shells wash up on Cape Lookout, attracting beachcombers from around the globe. We found two large whelks, but not having room in the car for souvenirs, we left them on the beach. What we did take with us, however, was the memory of a pod of dolphins swimming fairly close to shore, with one dolphin energetically slapping his tail on the water. We also saw surf anglers driving their trucks up and down the beach, setting up multiple long poles in the sand to catch red drum close to the shoreline. 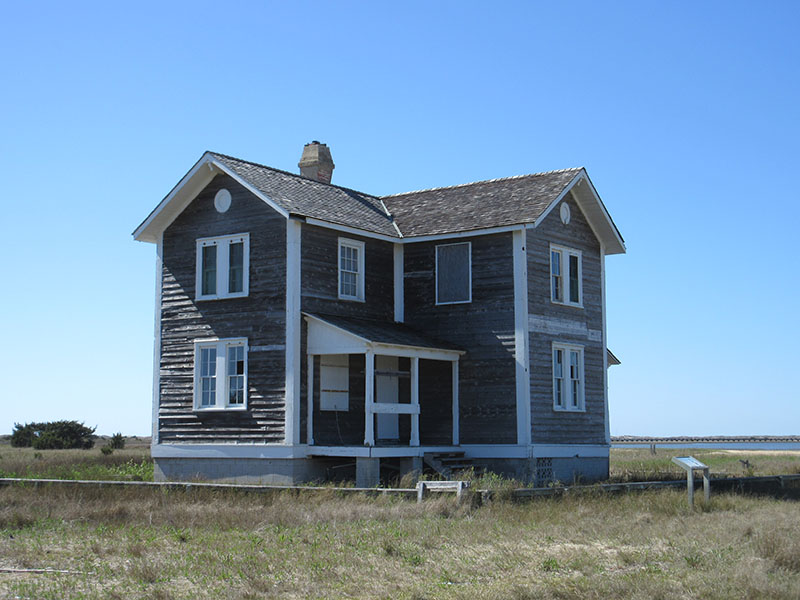 We crossed back over the dunes to the sound (protected) side of the barrier island and came to the Cape Lookout Historic District, a graveyard for abandoned houses and buildings that had been located elsewhere on the island but were moved here. Crew members from the old U.S. Lifesaving Station and Coast Guard Station (the two services are now one entity), fishermen and other assorted residents used to live here until 1971, five years before the park was established. The buildings now sit quietly weathering in the salty air.

Back at the 163-foot-tall lighthouse, we learned that its diamond-shaped paint job distinguishes it from the other lighthouses in the Outer Banks. The paint is considered the “daymark” so that daytime seafarers can tell where they are.

The lighthouse was closed the day of our visit, as was the old keeper’s house sitting next to it. Lighthouse keepers used to be considered uniformed officials akin to those in the Coast Guard, and we learned more about life at the lighthouses at our next destination, Cape Hatteras.

In the meantime, we caught the last ferry of the day back to Harker’s Island and were glad we got to the jetty early, as the captain took off 15 minutes before the scheduled departure time. We’re not sure if anyone got left behind that day.

9 thoughts on “Here’s Looking at You, Cape Lookout”