Islands — in Utah? Sort of. Surrounded by Colorado Plateau canyonlands instead of ocean waters, Islands in the Sky is one of three sections in Canyonlands National Park divided by the Green and Colorado rivers. From the town of Moab (convenient for visiting Arches National Park as well), and without a 4WD vehicle, the most practical section for us to visit was Islands in the Sky in the northern part of the park. Remote wilderness makes up much of the park’s two other sections, The Needles and The Maze.

The Islands in the Sky mesa sits like a sandwich between the Green and Colorado rivers. At an average elevation of 6,000 feet at the top of the plateau, it looks and feels a bit like the Grand Canyon’s little sister. Here, numerous hikes drop down via rocky canyon ledges to the extensive White Rim, a sun-exposed sub-plateau of white sandstone that runs in a meandering V-shape around the Islands in the Sky up above. Our visit in early November was the perfect time to explore this arid country.

Our first day we hiked the Murphy Loop Trail, a nearly 11-mile jaunt with magnificent views of Stillwater Canyon through which the Green River flows. Once we arrived at the edge of the mesa, the trail descended very steeply into a canyon where we had a bit of a staring contest with a bighorn sheep who thought he had the trail to himself that day. 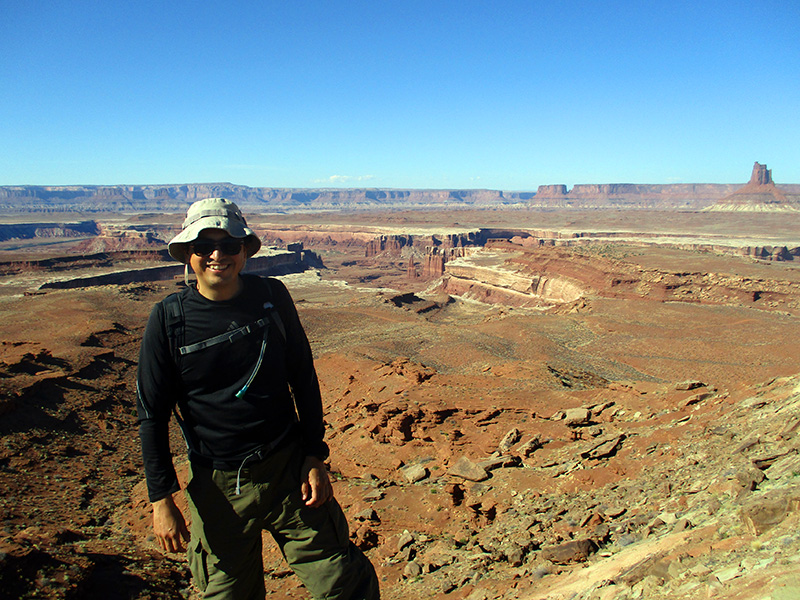 We continued picking our way down among the boulders until we came to Murphy Hogback, a flat, skinny ridge of land where we stopped for a snack with a view before connecting to White Rim Road. Popular with mountain bikers, motorcyclists and jeep drivers, this rugged, 100-mile back-country road runs along the rim some 1,000 feet above the Green River.

We followed White Rim Road to connect to Murphy Wash for the return loop. The walk back up followed the wash for nearly three miles, and some of the rocky cliffs and wash overhangs provided cool shade that we found very welcome on the warm, sunny afternoon.

Once back at the junction with the main Murphy Trail, we had one final steep climb out of the crescent-shaped canyon to reach the mesa above. The hike was good preparation for our upcoming foray into the Grand Canyon (see the recap of that here), and we were beat at the end of the day.

That didn’t stop us from undertaking an even tougher hike the next day. The Syncline Loop Trail traverses more than eight miles of punishing terrain. It circles the unusual Upheaval Dome crater, which may or may not have been caused by a meteor strike (scientists are still debating the issue). The Park Service considers this trail one of the toughest day hikes in the Islands in the Sky area, with the majority of trail rescues occurring here because of difficult route-finding and incredibly steep stretches. However, the ranger recommended it for fit people wanting a challenge, and that sounded like us. In fact, this was one of our favorite Project 100 hikes.

Following the trail clockwise, we descended into a shaded canyon and eventually came to a dry wash as the trail bottomed out. A bit past three miles in we reached the turnoff for Upheaval Canyon, the only footpath to the Green River. We considered detouring to see the river but hesitated to add another seven miles to our day. The main trail soon came to another turnoff, this time for the Upheaval Crater Spur Trail that headed into the heart of the crater. Although we were tempted to explore the crater, adding even five miles seemed unwise.

We slowly climbed out of the canyon and then had to navigate an immense boulder field that nearly defied ascent. This is where the truly difficult route-finding came in, and we had to remain alert for small rock cairns marking the way. At one point, if not for a small metal plaque attached to a boulder reading “trail” with an arrow, you would never guess the trail squeezed through the crevice above it.

The trail rose through one steep canyon only to come to another, which required a slickrock scramble, and then a longer walk through numerous washes. We wondered if we had lost the trail because it seemed like we had been hiking for well more than eight miles. Yet we continued to spy cairns and footprints in the sandy washes and kept trudging along. We were relieved to see the car when we finally emerged at the trailhead late in the afternoon.

Despite our weariness, we wanted to follow the ranger’s other recommendation of catching sunset at the Grand View Point Overlook where the paved road ended. Here, unlike the lightly traveled Syncline Loop Trail, quite a few people waited for the perfect sunset photo from the overlook’s ledges. Our pitiful camera couldn’t capture the beautiful sunset, but we did find the dramatic scene in front of our eyes restorative after a long, hard day’s hike. The air quickly cooled after sundown, and we headed back to Moab in the twilight.

4 thoughts on “Hiking in Utah’s Islands”