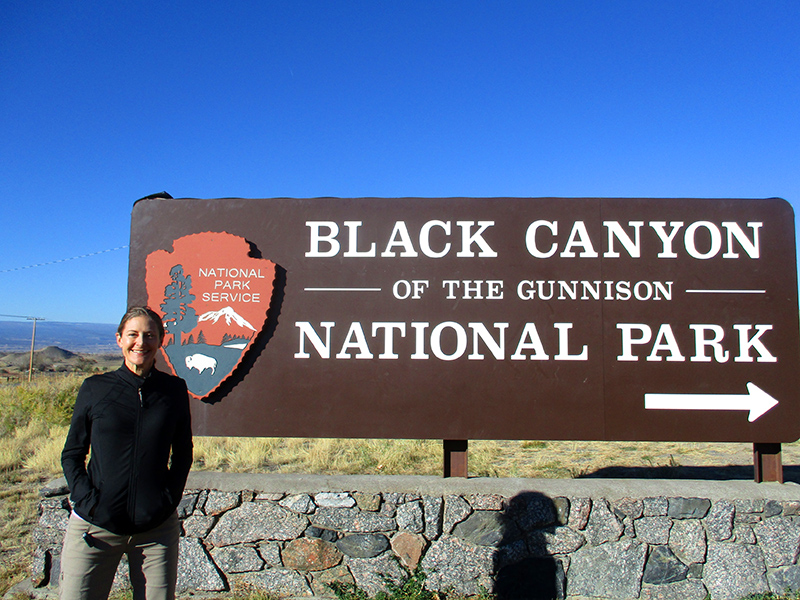 We continued into Colorado to explore three very different parks, starting with Black Canyon of the Gunnison National Park. It began as a national monument in 1933 (and in 1999 became a full-fledged national park) thanks to the efforts of local citizens who recognized the uniqueness of this steep-walled gorge — so deep and narrow that shadows cast on it make it appear black. The Gunnison River drops an average of 96 feet per mile, and that steep gradient helped fast-moving water carve out this canyon of hard rock that, at its deepest, spans 2,772 feet from river to rim. 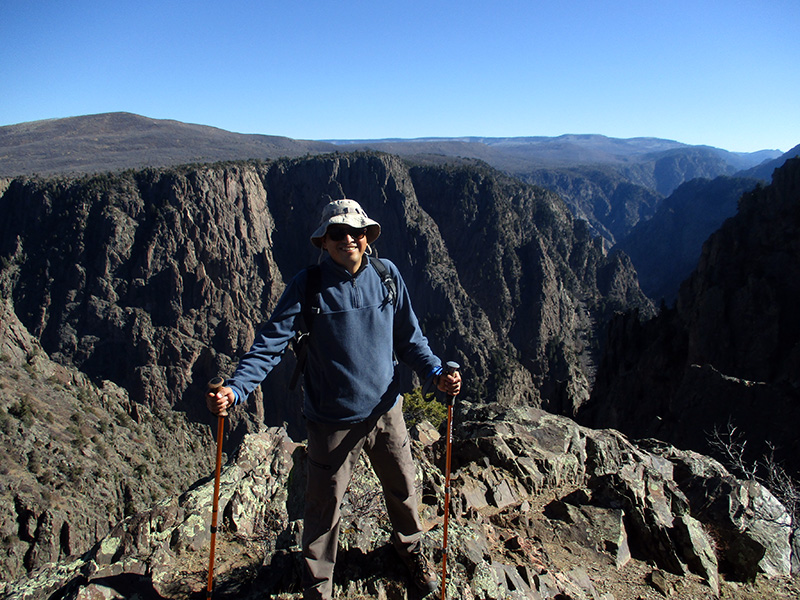 Of course, it’s not as deep as either the Yosemite Valley or the Grand Canyon, and most visitors would say scenically the Black Canyon of the Gunnison can’t hold a candle to either one. But the park merits at least a day’s exploration for those living in or passing through western Colorado.

We had only one day to spare and so spent our time hiking on several trails and stopping at the gorge overlooks on the South Rim. Hiking all the way down to the river requires a back-country permit, and going over to the North Rim adds a day.

We started with the Oak Flat Loop that descended partway into the canyon. We could hear the muted roar of the Gunnison, which looked like a tiny ribbon of deep blue winding its way through the rock, far down below. 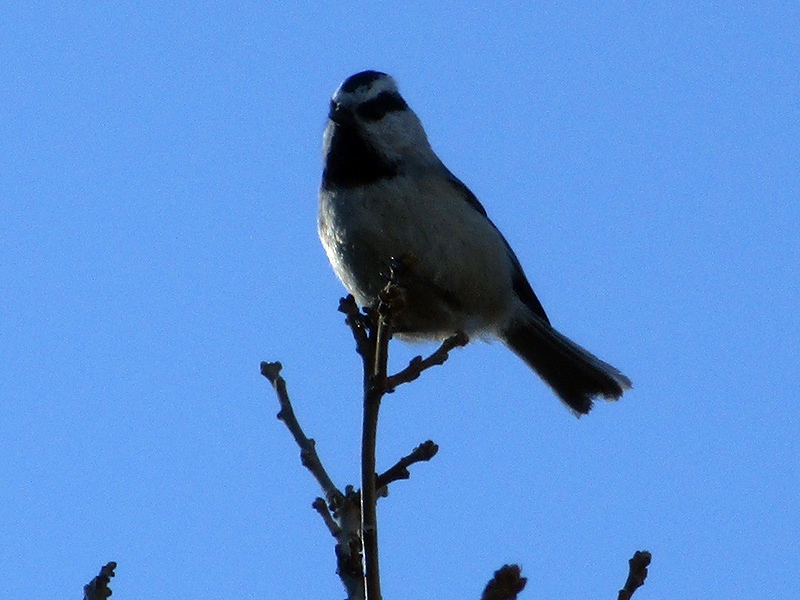 On the mid-November day we visited, the shadier sections of trail had patches of snow, and the chilly air felt downright wintry. A mixed flock of winter birds — friendly nuthatches and mountain chickadees — called excitedly as we walked through the forest along the rim, and we stopped to chatter back to them as they flew around our heads. 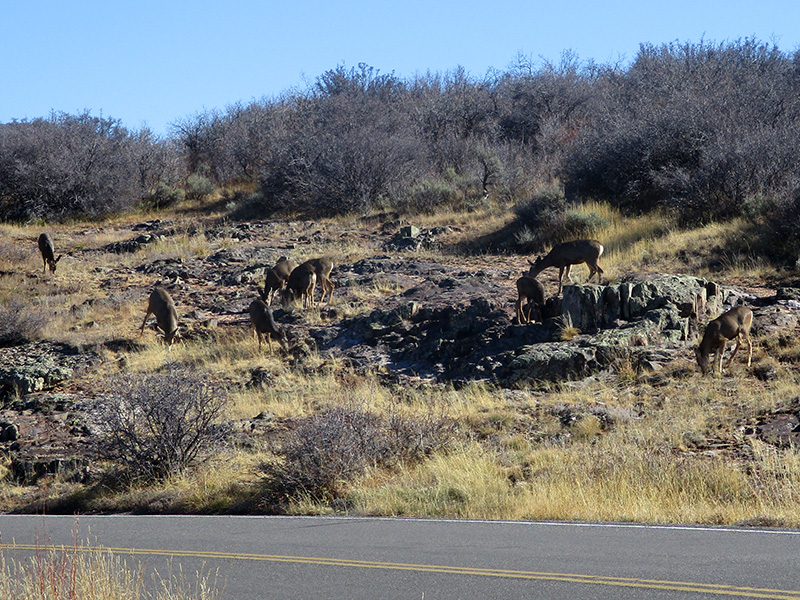 Crossing the park road and connecting to the Uplands Trail took us into more arid country. Now warmer in the sun-exposed landscape, we saw several small herds of mule deer, including one herd browsing on the sparse vegetation by the roadside. We linked up to the Rim Rock Trail that passed several impressive viewpoints facing east before looping back to the Visitor Center.

From there we drove to the end of South Rim Road at High Point, the park’s highest-elevation spot at nearly 8,300 feet. We set off on the Warner Point Trail that afforded expansive views of the Bostwick Park ranchlands below us to the west, as well as the gorge to the north and east. 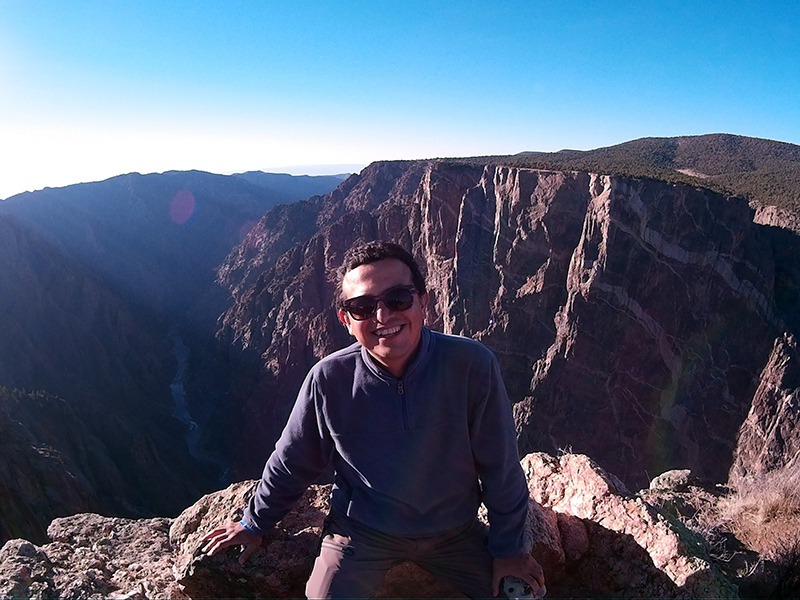 We ended the day taking several short trails through scrubland to see the canyon from several different vantage points as we headed back toward the Visitor Center. One notable stop was the Painted Wall viewpoint, which looks out to the highest vertical wall in Colorado. At 2,250 feet high, it’s nearly twice as tall the Empire State Building, and the lighter-colored pegmatite striations in the rock add to the canyon’s visual appeal. Although this park lacked the wow factor of many other parks — especially the ones we had just visited in Utah — we’re glad we carved out some time to include this in our Project 100 itinerary.

2 thoughts on “Carving out Time for the Gunnison”