We descended from the cloud forest in Monteverde to Carara National Park on the Pacific Coast. It’s in a transitional zone where the hot, dry tropical forest to the north meets the wetter tropical rainforest to the south, creating great conditions for a mix of wildlife including another long-tailed, multi-hued beauty — the scarlet macaw.

Upon arrival, we took a boat ride on the Tarcoles River and saw an enormous variety of water birds as well as crocodiles. However, we were disappointed that a man from another boat stood in the shallows slapping the water with a dead chicken to attract crocodiles and put on a show for the tourists, first teasing and finally feeding the croc. So much for protecting species in their natural environments.

We spent one blazing hot day walking along the park trails to see birds, monkeys, a sloth and a very close armadillo. The shrill noise of cicadas in the forest made it impossible at times to hear the birds. In forest environments, listening is a critical skill to locate birds. Some of the cicadas sounded like chainsaws, while others sounded like a motorcycle shifting gears. According to our guide, the locals believe that when cicadas start up before 10 a.m. it’s going to be a broiler of a day, and that was certainly true in our case.

Speaking of guides, Dennis and I had become spoiled by excellent bird guides on group trips we had taken in Brazil, Trinidad and Tobago and elsewhere. In Costa Rica, most of the guides we hired didn’t know their birds any better than we did. As a result we missed many of the species we had wanted to see.

We did enjoy our lodge, however, with beautiful grounds set along a creek in the forest not far from the park. We spent one morning walking a trail connected by hanging bridges. We had stopped quietly to check out a colorful rufous-tailed jacamar and were treated to a bonus as a coatimundi came nosing his way down a small streambed. For several minutes, he poked about without noticing us, but at one point he looked up and froze, peering at us to determine whether we were a threat. He sat down, hugging a log for a few minutes, staring at us all the while, then decided he’d move along the trail out of the way. We saw other coatis on the road closer to the lodge as well.

Later that day we rode our lodge’s zip-lines in the canopy. It was exhilarating to rush through the trees from platform to platform high above the ground hanging only by a harness attached to a thin cable. We finished just in time, because a pounding rainstorm blew in as we arrived at the last platform and dashed to take cover in the open-air lobby. Soon the power went out and stayed out until the middle of the night, so we and the other lodge guests had dinner by candlelight. 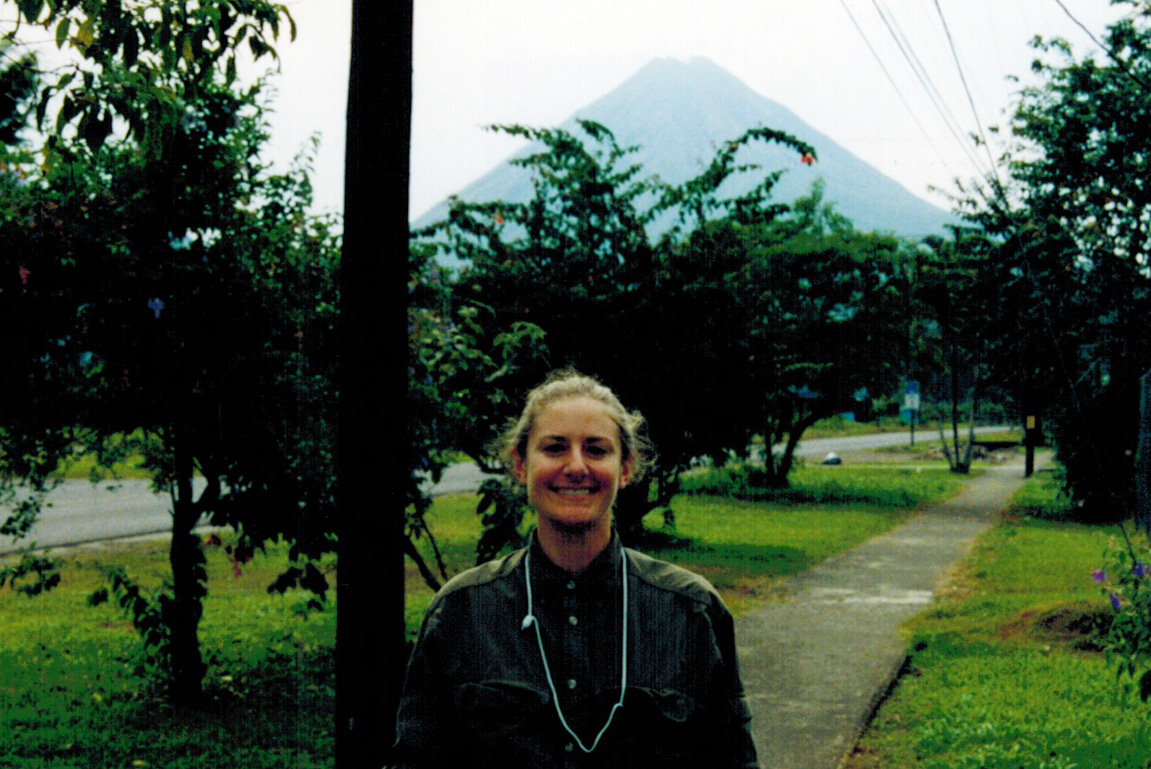 Following our stay in Carara, we traveled back to Arenal to stay for a few days next to the volcano. It quickly became clouded in so that we could not see the top. We weren’t lucky enough to see fiery arcs spewing from the top and red lava flowing down the side of the cone, which visitors on clearer days may enjoy. We may not have seen volcanic activity, but one evening as I was reading I thought I was feeling dizzy and Dennis said he felt the shaking, too. The ceiling light in the room was swaying and we heard what sounded like low thunder or a big truck rumbling by outside. The mighty volcano had come to life after all.