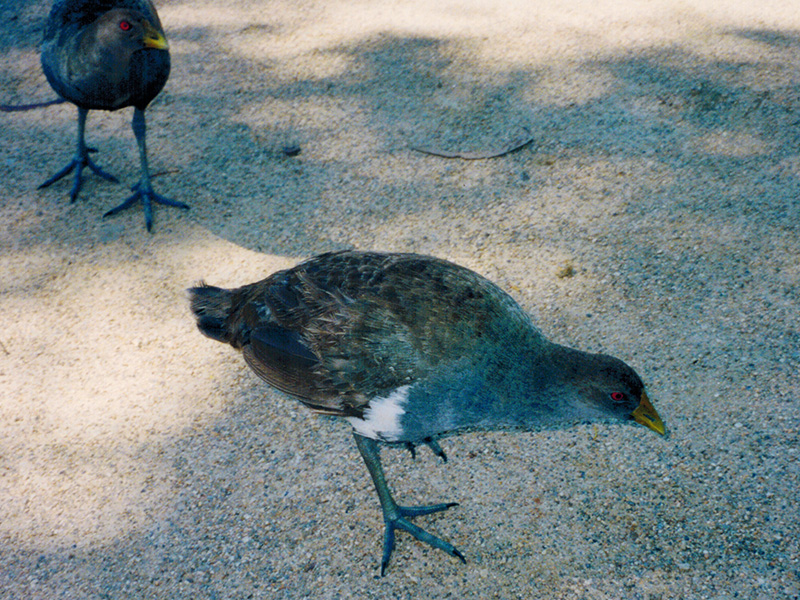 As impressed and refreshed as Kangaroo Island left me, I found Tasmania even more captivating. We flew into the Tasmania capital, Hobart, to meet our bird guide, Ruth Brozek. Hobart is like a smaller, cleaner version of San Francisco with a nice mix of old and new architecture and a vibrant street scene. We picked up lunch to go and stopped at several wooded locations en route to the Bruny Island ferry, checking out birds along the way. Each stop yielded several new species: the Tasmanian native-hen (above), pardalotes, wattlebirds, several kinds of parrots and honeyeaters and so many more. 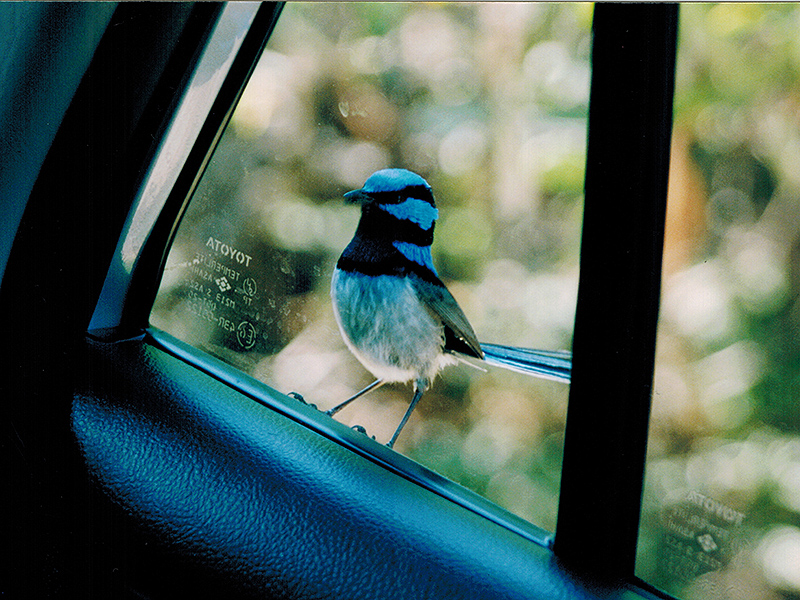 We had a very close encounter with a male superb fairy-wren, a delightful little bird with a long, cocked tail. He flew to the car window and tapped on the glass, flitting repeatedly from front to back and to the side mirrors battling his reflection in the windows. We hated to drive on but didn’t want the poor little fellow to exhaust himself. Like the fairy-wren, the wildlife viewing on Bruny Island was superb. In fact, we were so busy looking through our binoculars that we failed to take many photographs of all the wonderful species we spotted, which included Bennet’s wallabies (including a white morph), Tasmanian pademelons and dozens of different birds.

We stayed two nights in Inala Nature Tours’ Nairana Cottage, a woodsy cabin on South Bruny that reminded me of my grandfather’s old cabin in the Missouri Ozarks. It’s the kind of place I could just move right into and never leave — small and cozy inside with woods and a pond outside. We went out for a night drive to see another fairy penguin colony, along with a colony of short-tailed shearwaters nesting and mating amid the scrub on the beach at the neck of land connecting South Bruny and North Bruny.

Sadly, the next day we awoke to clouds, a cold wind and rain that lasted all day and into the night, but that did not deter Ruth from getting us out to find more birds. I was glad she did, because one of my favorites for the day was the pink robin, a very pretty little dark grey and bright pink bird that resembles a Japanese confection. The trails were muddy, which brought out leeches. The little demons moved quickly, one after another squiggling up my boots at top speed to get to my legs. Ugh.

That night we went out into the rain in search of quolls — brown animals with white spots all over — but were unsuccessful at spotlighting any. I think they wisely stayed out of the wet weather. However, at the end of the night as we turned into the driveway of our cabin, we spotted a tawny frogmouth, a kind of drab-colored nightjar that’s tricky to see because of its mottled plumage and habit of sitting very still in a tree that matches its camouflaged coloring. We only saw it because it flew and landed in a tree as we approached. 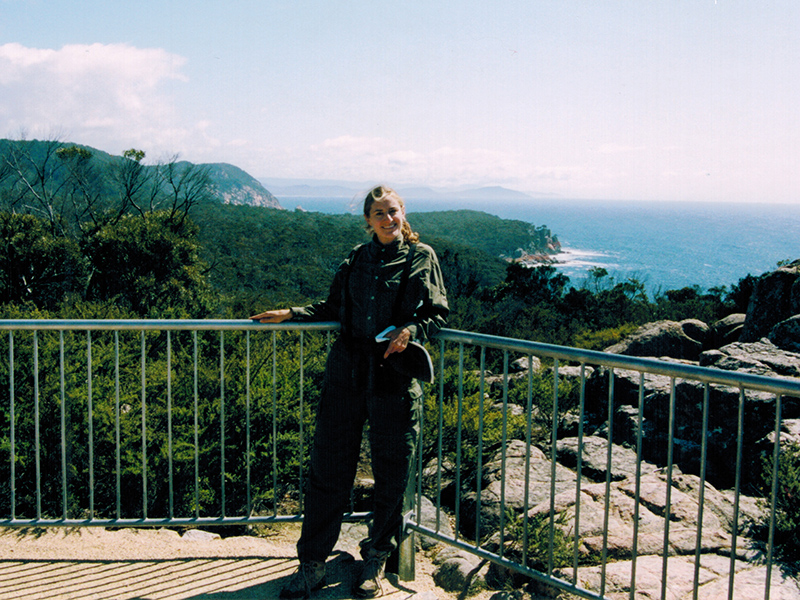 Moving on to “mainland” Tasmania (even though it, too, is an island), we loved the hilly, green landscape and large swathes of intact forest. Tasmania also has some pleasant coastline and modest 1960s and ’70s-style homes that reminded me of my childhood. Freycinet National Park on the east side of Tasmania protects the Freycinet Peninsula that juts out into the Tasman Sea. The park combines forested and arid land, with granite boulders dominating the landscape, particularly along the coastline. The many bays are dotted with casuarina (wispy trees also called she-oaks) and banksias, which have large, spiky, brown cones that look like the end of an animal’s tail. 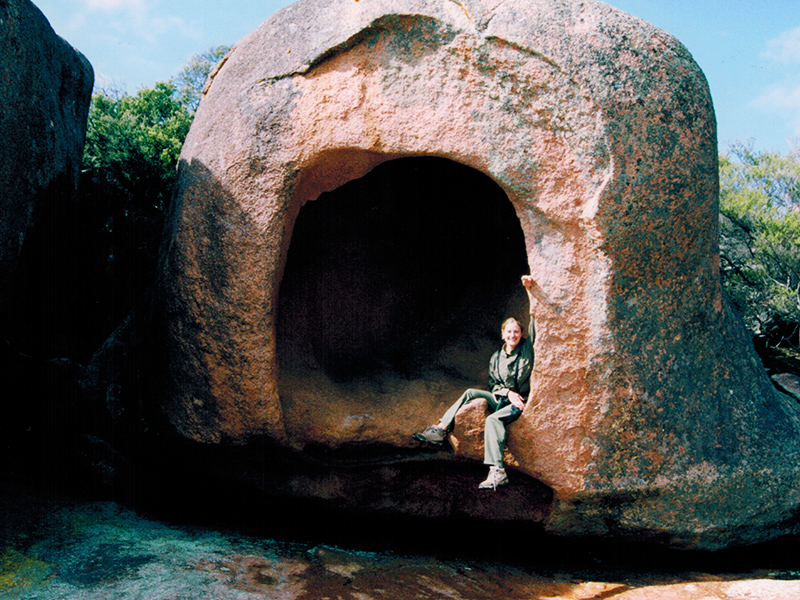 One day we drove up to the Friendly Beaches area, which has the softest, silkiest white sand I’ve ever felt and is marvelous for beach strolling. We also went for a few walks in more rugged coastal terrain, such as Cape Tourville and Sleepy Bay on the east side of the peninsula that has an array of sculpted granite boulders and rockpools. Sleepy Bay is popular for snorkeling and diving, but instead I chose to go sea kayaking in Coles Bay on the west side of the peninsula near the Freycinet Lodge where we stayed. 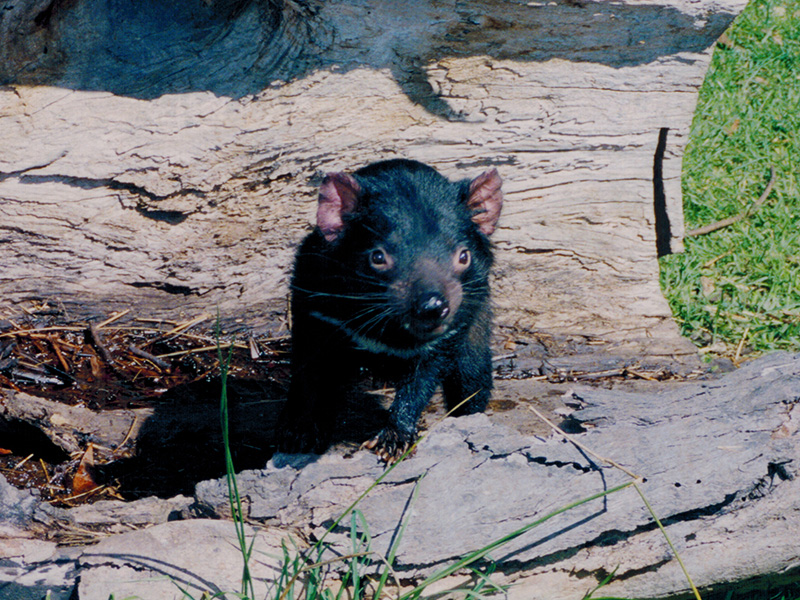 The next day we drove farther up the coast to Natureworld near the town of Bicheno to see some Tasmanian devils and wombats we had not encountered in the wild. The Tasmanian devil is a small, nocturnal, meat-eating marsupial that is black with white patches of fur on the rump and chest. Far from an evil creature, the devil is both endearing and endangered, and it has suffered mightily from a lethal infectious cancer called Devil Facial Tumour Disease.

Not all of the animals were native to Tasmania, and many (like the kookaburra above) lived in fenced enclosures, but other species roamed freely in the park. The wildlife sanctuary sold grains for visitors to feed to the free-roaming creatures. It was one thing to feed the tiny rock wallabies in the Atherton Tablelands but another experience altogether with huge kangaroos. Kangaroos are tall and intimidating when they come bounding up to you in search of a meal. The emu in the petting zoo section of the park was also a bit scary, coming at us with his pointy beak right about eye level to us and pecking at our hands. I found the close interactions with large wild animals rather unsettling, but despite that, Tasmania overall had a most relaxing atmosphere. This smallest state in Australia was my favorite place in the whole country (minus the huge state of Western Australia, which remains on my wish list).

Our time Down Under was quickly drawing to a close, with the country’s largest city, Sydney, our final destination for exploration. That segment is next.

2 thoughts on “A Devil of a Good Time in Tasmania”