A veritable layer cake of stunning Colorado Plateau scenery unfolded in front of our eyes as we entered Zion National Park in southern Utah, driving in from the east on Zion-Mount Carmel Highway. The road cut through a layer of hash-marked white Navajo sandstone known as Checkerboard Mesa, then descended past hillsides of rock resembling a buttery batter. 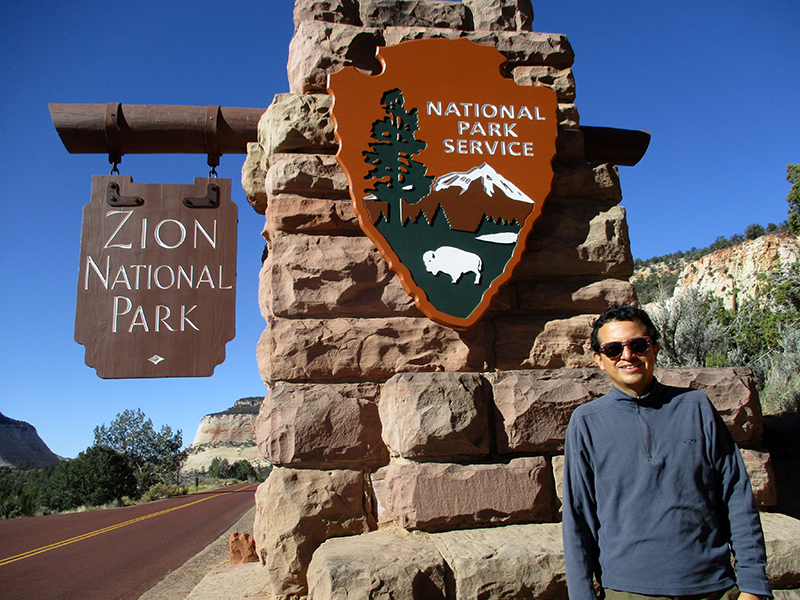 Arriving on a pleasant Sunday afternoon in late October, we checked into the Watchman Campground and set up camp before walking over to the adjacent Visitor Center, where rangers offer hiking advice and issue back-country permits. But an even better place to delve into the park’s past is the Zion Human History Museum. A free, convenient shuttle bus stops at the Visitor Center and museum as well as seven other points within Zion Canyon, and a walking path follows the shallow Virgin River to connect the two facilities.

At the museum in the park orientation film, we learned about the geologic history of Zion and the eight layers of rock that formed here from ancient sand dunes and sea beds. Despite its meager flow, the Virgin River has eroded away at these rock layers over time to expose the layers and carve out the colorful canyon that exists today. We also learned about the Ancestral Puebloans and Southern Paiute people who called this place home before Mormon settlers arrived on the Colorado Plateau in the mid-1800s.

From the campground we also walked to the small town of Springdale — reminiscent of Arizona’s upscale, red rock town of Sedona in miniature — that abuts the park on its southern end. We stocked up on groceries for our three-day stay and spent the remainder of the afternoon relaxing in the day’s last rays of sunshine back at camp. 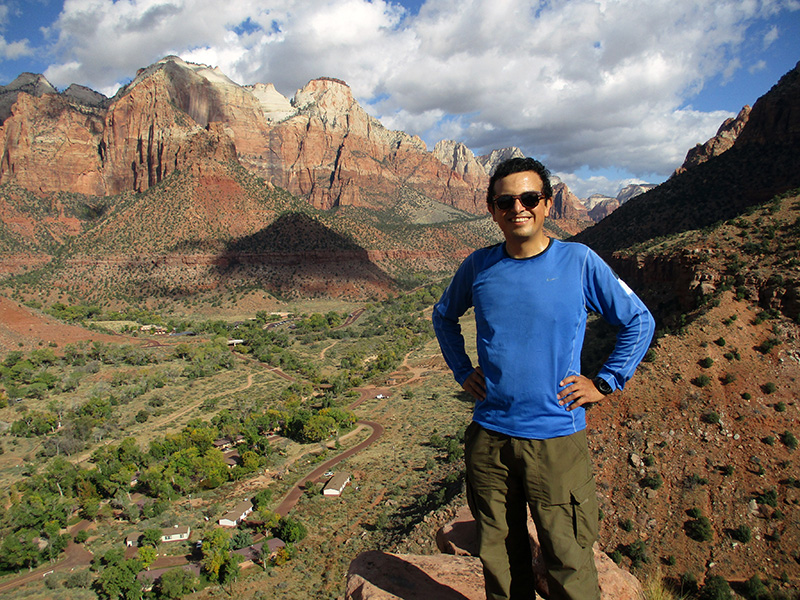 The next morning we hiked up the short Watchman Trail, also connected to our campground, that ended at an overlook with fine views of lower Zion Canyon and Springdale. The hike was a warmup for our afternoon excursion to Angel’s Landing, a tall, skinny fin of Navajo sandstone that is one of Zion’s marquee destinations.

To get there, we took the park shuttle up to The Grotto. The Angel’s Landing Trail proceeds steadily uphill, eventually reaching a saddle at Scout Lookout with views on both sides of the fin. The trail then climbs via 22 tiny switchbacks known as Walter’s Wiggles and emerges onto a steep, narrow ridge with iron chains drilled into the stone for hikers to clutch in the most harrowing stretches. Nerves of steel also come in handy here. It’s easy to imagine yourself pitching to your death from a sheer drop-off, and in fact six people have died on the Angel’s Landing Trail since 2004.

Those fit enough to make the heart-pounding climb — which rises 1,500 feet in two and a half miles — get an excellent cardio workout. Admittedly, some of the heart palpitations I felt may have been due to the daunting nature of the climb, but it was Halloween and I thought it fitting to do something a little scary. And the views from the top of Angel’s Landing were unbeatable. This exhilarating hike ranked among our favorite Project 100 hikes, and we felt like we accomplished something truly special. 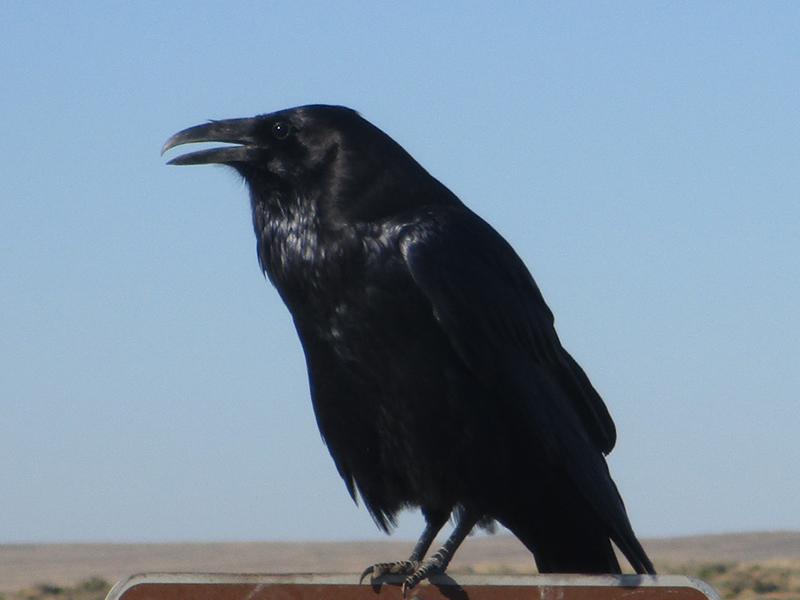 After dinner we went to the Zion Lodge for the evening ranger program. As a treat for Halloween, the topic was ravens. Ravens feature in legends in many parts of the world and are often seen as harbingers of doom and death, but these resourceful birds deserve more respect than they usually get. The ranger informed us that ravens often inhabit places that other birds — like their smaller cousin, the crow — find too harsh, and they’ll eat almost anything, which explains their success throughout history. She ended the educational portion of her presentation by reading Edgar Allen Poe’s poem, “The Raven,” much to the audience’s delight.

The next day we took the shuttle bus to see more the park’s highlights. We started at the north end of Zion Canyon Scenic Drive where hardy hikers begin the trek through the frigid waters of the Virgin River up the canyon to The Narrows, called so because the high canyon walls stand as little as 20 feet apart in places. We saw people with rented wetsuits, waterproof boots and sturdy wooden walking sticks heading upriver, but the idea of trudging through 54-degree water on a 54-degree day did not appeal to me in the slightest. We turned around at the end of the paved Riverside Walk.

We then boarded the bus to the Weeping Rock stop back down the canyon road, where we ascended the Hidden Canyon Trail. Like Angel’s Landing, this trail is not recommended for people with a fear of heights or improper footwear, and here, too, the Park Service has installed chains help hikers navigate narrow sections with slickrock surfaces and vertigo-inducing drop-offs. 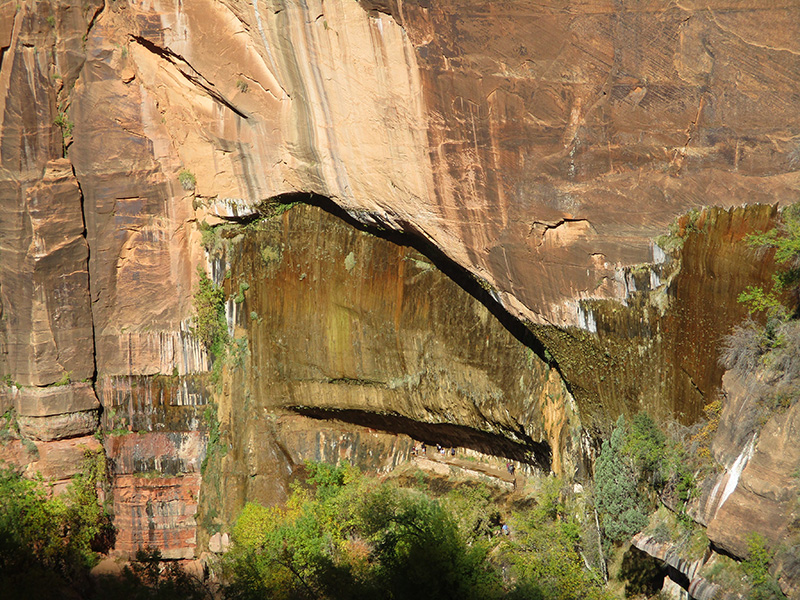 At the end of the maintained trail, we continued on for another half-mile into Hidden Canyon itself. The shaded canyon between Cable Mountain and the Great White Throne followed a ribbon of sand punctuated by occasional boulders and cliffs that required hand-over-hand scrambling. The return trip had marvelous views of the canyon as well as Weeping Rock, a sandstone alcove with dripping springs that nourish a hanging garden of moss and ferns. 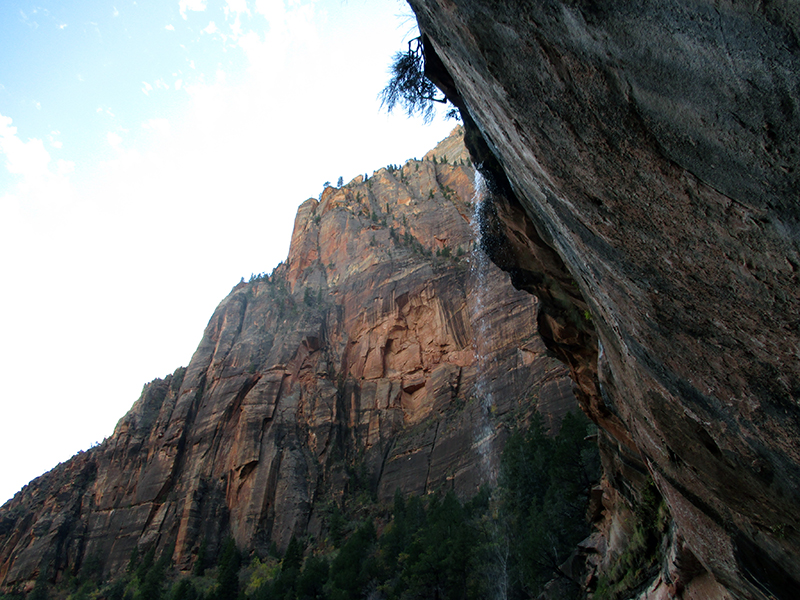 Finally, we hiked the well-traveled Kayenta Trail. The path sits high above the Virgin River and leads to the lower, middle and upper Emerald Pools tucked back in a shady, wooded indentation off the main canyon. The waterfalls were more of a mist than a cascade; they must be more impressive during spring runoff or after summer monsoon storms.

Our last treat in this park full of delights was on our way out the next day. We stopped off at the short but sweet Canyon Overlook Trail just past the eastern end of a mile-long tunnel on Zion-Mount Carmel Highway. Because of its popularity, for visitor safety a chain-link fence lines the trail’s tighter stretches with sheer drop-offs, but wider spots like the section beneath a large rock overhang remain open to the edge.

The trail ended at a viewpoint for Pine Canyon and Zion Canyon in the distance beyond. As we sat at the edge of the overlook, we reflected on how much time it took nature to sculpt this geologic treat, and how little time we had to enjoy it. And we didn’t even get to the Kolob Canyons section of the park to the north. Like a delectable layer cake, one taste of Zion is simply not enough. We will be back for another slice someday.