We started our exploration of Boston National Historical Park at Faneuil Hall, the “cradle of liberty,” which was built in 1742 as an open-air marketplace on the first floor and a meeting space for town government and public debate on the second floor. We took a ranger-led walking tour south along a short stretch of Boston’s Freedom Trail. This painted and bricked path through downtown strings together many of the most important sites in America’s history on the road to independence from Britain in the late 1700s.

Our walk led us past the Old State House, which was the site of the 1770 Boston Massacre (a rather loose use of such a strong term considering that only five people died). We proceeded to the Old South Meeting House that had been a Puritan church and the site where patriot Samuel Adams rallied crowds to launch the Boston Tea Party in 1773.

Immediately following the tour, we joined a second ranger-led walk heading north of Fanueil Hall. We strolled through Boston’s North End, downtown’s oldest residential neighborhood that was originally home to many Irish immigrants and is now home to many Italian-Americans. It’s a delightful part of town filled with Italian groceries and restaurants that pump the most mouth-watering smells into the streets from their kitchens.

On miniscule Marshall Street, we passed two pubs that vie for the title of Boston’s oldest — the Green Dragon Tavern and the Bell in Hand Tavern — although competition exists from the Warren Tavern across the Charles River in the Charlestown neighborhood.

We continued past Paul Revere’s house to the Old North Church where Revere began his famous midnight ride on April 18-19, 1775. Before galloping off, he hung lanterns (“one if by land, two if by sea,” as the famous line from American history goes) in the church’s bell tower to advise patriots of the route that British soldiers would take to destroy stockpiled munitions some 16 miles away in Concord.

When the tour ended, Hector and I crossed the Charles River to see the famed U.S.S. Constitution in the Charlestown Navy Yard. Even though the historic frigate from 1797 is in dry dock being restored now, it remains the oldest commissioned warship still sailing. Despite its nickname of “Old Ironsides,” earned during the War of 1812 for withstanding British cannon fire with nary a nick, the ship is actually made of wood.

From there we continued along the Freedom Trail to the nearby Bunker Hill Monument, set in a picturesque neighborhood of stately brick homes. This 221-foot-tall granite obelisk commemorates the first battle in the American Revolution that took place on June 17, 1775. Although the British technically won the battle, they suffered more casualties than the American patriots.

We arrived too late in the day to climb the steps to the top of the Bunker Hill monument, but we consoled ourselves back on Marshall Street with beer and clam chowder at the Union Oyster House, which serves some of the best clam chowder I’ve ever had.

Refueled, we circled back through the heart of the city to the end (or beginning, depending on your starting point) of the Freedom Trail at Boston Common. Established by Puritan settlers in 1634, this is the nation’s oldest public park. 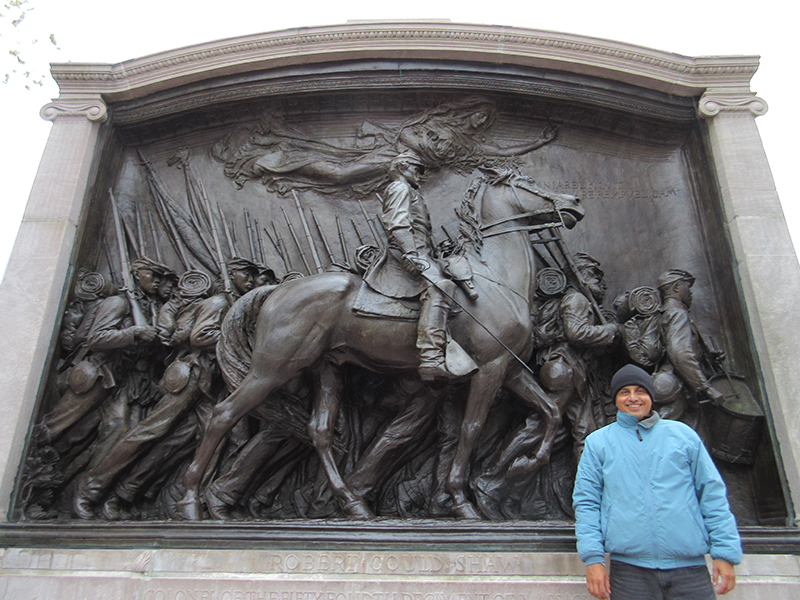 At the edge of the park, across from the Massachusetts State House, sits the Robert Gould Shaw Memorial, a bronze relief sculpture by Augustus Saint-Gaudens (who has a national park in his honor we visited in New Hampshire; stay tuned for a recap of that to come soon). This memorial commemorates the 54th Regiment Massachusetts Volunteer Infantry, popularized in the 1989 Matthew Broderick-Denzel Washington-Morgan Freeman film, Glory. When fog rolled in, obscuring many of the taller buildings surrounding the park, it was time to take the T (Boston’s subway) back to our hotel in the suburb of Lexington.

On the topic of Lexington, the next post will cover our continued exploration of history in that famed Massachusetts town.

6 thoughts on “On the Freedom Trail in Boston”