We moved on again to Okinawa, the largest island in the Ryukyu chain. The airport corridors were filled with displays of orchids — thousands of them — and the main terminal had a big aquarium with an array of colorful fish and one enormous wrasse. As with Ishigaki-jima, Okinawa and the other Ryukyu islands are known as tourist destinations, particularly for divers, snorkelers and beachcombers. The people in this part of Japan also have a different dialect and culture, with unique forms of music, dance, textiles and other traditions. Many of the buildings have lion-dog gargoyles adorning the roof corners to ward off evil. 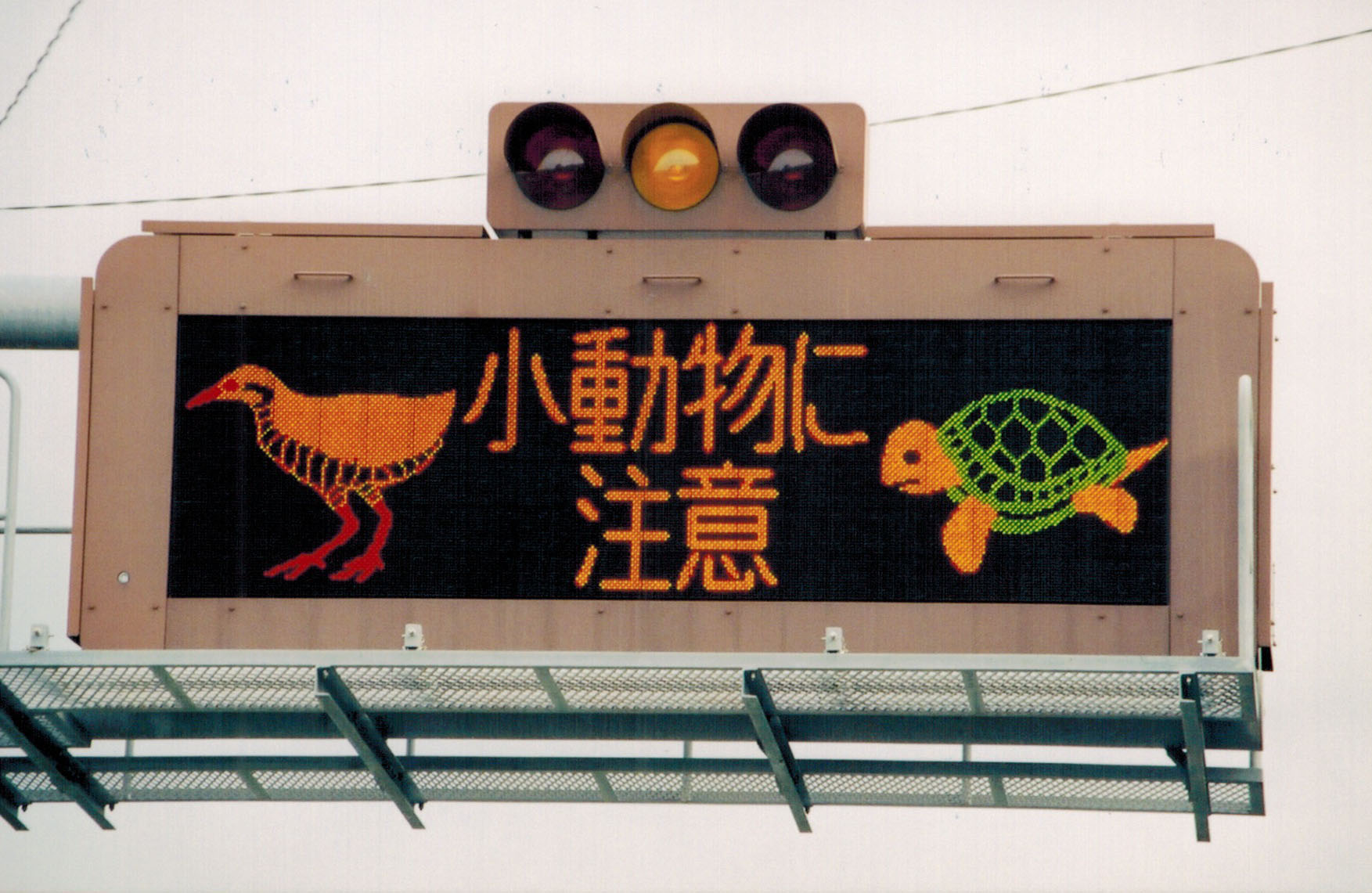 We drove several hours to the small town of Hentona on the northern end of the island where most of the birds are found in the few remaining patches of forest. We waited in vain for nearly two hours around dusk near a dam overlook, hoping to spot the famous Okinawa rail where our guide Pete had seen it in previous years. We knew it must be in the area because there were cartoons of the smiling bird on signage everywhere — the Okinawa rail with a tennis racket and sneakers outside a health spa, the Okinawa rail pumping gas at a filling station, the Okinawa rail with a mask and snorkel near the beach. A local stopped by, and between his limited English, my very limited Japanese and some sign language back and forth, he told us about a better place to find the rail the next morning. He even drew us a map to get to the cemetery in the tiny village of Ada not far away.

While we had to give up without the rail that evening, we did come across another winged creature we were not so happy to find — buffalo flies, tiny black flies that bit any exposed patch of skin. We didn’t feel the bites but noticed little blood droplets forming where they attacked. Each bite site itched terribly and swelled into a hard lump, with localized muscle aches lasting for several days. Not fun. We should be thankful that it wasn’t worse, because this pest is in the same genus of black-fly found in Africa and Central and South America whose bite can cause river blindness.

Pete and the Swedes were skeptical about what the local guy told us, so the next morning we went back to the dam and again found nothing, so finally we headed over to Ada. On the main road heading into the village several signs pointed the way to the Okinawa rail, and sure enough, at the cemetery we found the rail. Quite a few of them, in fact. It is one of Japan’s most spectacular endemic birds, with a bright orange bill and legs, black face, and black-and-white banded breast and belly. 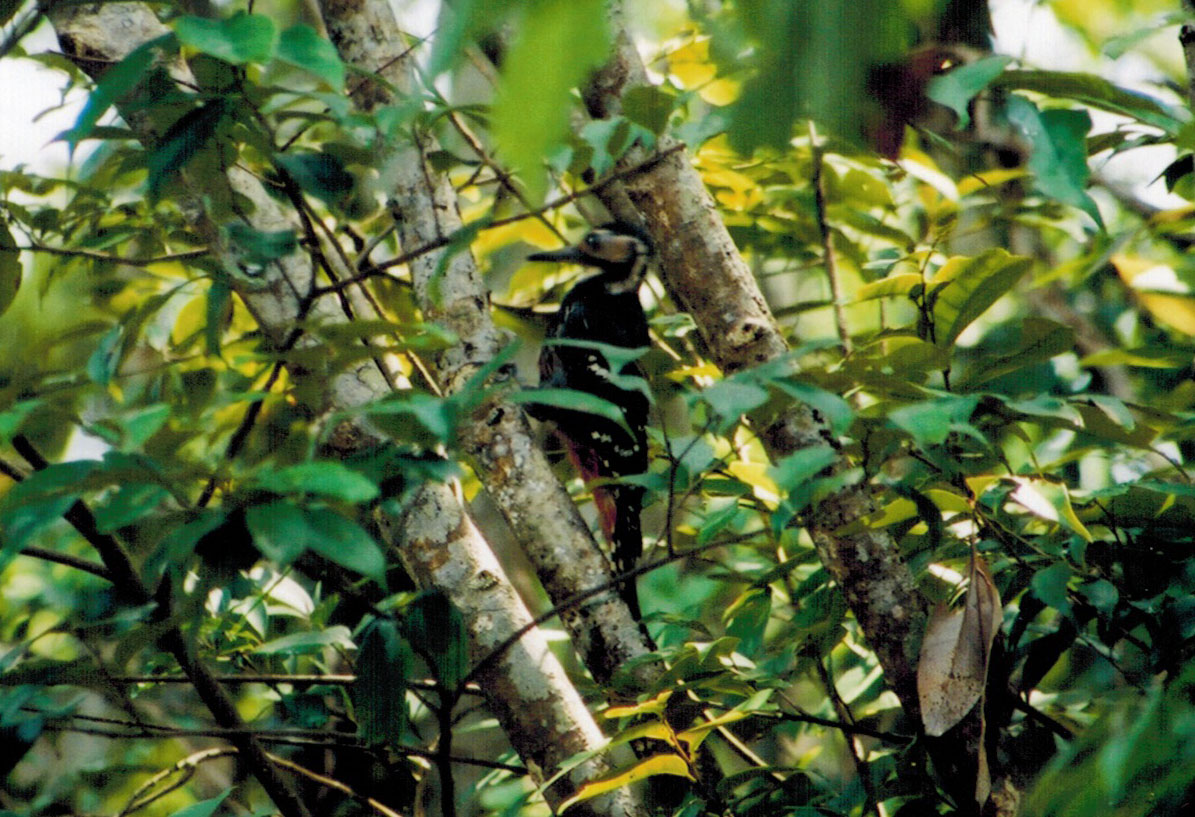 That fabulous species checked off the list, we drove up into the forest to find the Ryukyu robin and the very rare Pryer’s woodpecker (above), both of them a success. Later in the afternoon, while Dennis and I explored the town of Hentona, Pete and the Swedes went back to the cemetery in Ada and saw more than two dozen rails. So much for the locals not knowing anything about birds!

Our last stop on the birding trip was Amami-Oshima, one of the more northerly islands in the Ryukyu chain. This was my favorite of the Ryukyus because the island was more pristine, with much of the interior mountain terrain remaining forested, streams and waterfalls left undammed and unpaved (unusual for Japan, a country that loves cement!), and coastlines undeveloped. The vegetation is just as lush and tropical in the lowlands, and it too is known as a resort destination for divers and sun-worshippers. We stayed in the small city of Naze, which has an interesting mix of styles and colors in the architecture and many narrow alleys full of teeny, tiny bars. At night we drove up into the forest to look for the endemic Amami woodcock, which we found right away.

The following day the rain put a bit of a damper on our birding efforts, but we still had the following morning to get better looks at a few more birds. The Amami Natural Forest Park is a fantastic spot containing winding trails, an excellent visitors center with hundreds of butterfly specimens, picnic areas and a big playground where some colorful frogs were nesting in the fork of an old tree. I highly recommend Amami to anyone wishing to get off the beaten path in Japan.