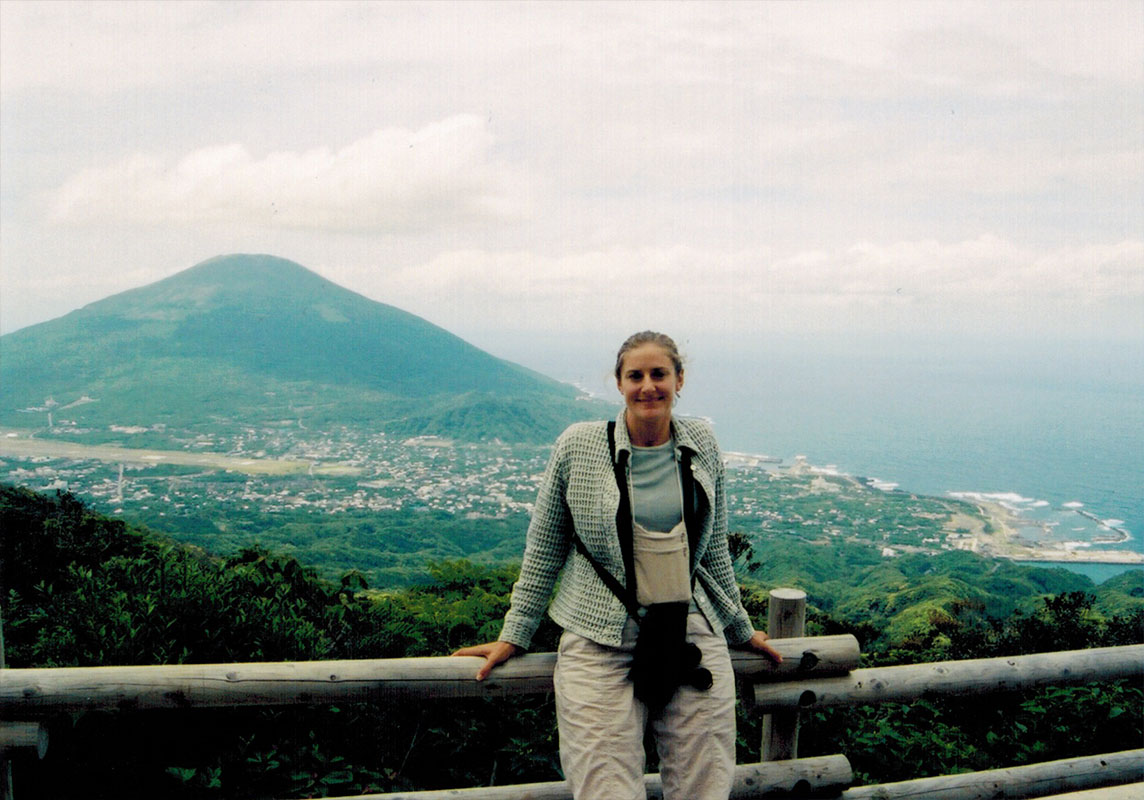 Early the next morning I awoke to birds chirping. Forest birds. Yet we were still on the ferry in the Pacific Ocean! Thoughtfully, the crew played recorded bird sounds over the ship’s intercom to wake passengers gently before we docked at the first island for some quick cargo and passenger exchanges. After a few more stops we landed on Hachijo-jima in mid-morning. The small, quiet island had lush, tropical vegetation and reminded me very much of Kauai, and we were delighted by the views of the island from the Noboryotoge Lookout.

We stayed in a very clean and tidy minshuku — a small, family-owned inn featuring two-room suites with tatami mat flooring, roll-out futons for sleeping, and shared baths. In these establishments you must leave your shoes in the entry foyer and they provide slippers for your use in common areas (but you then have to leave those slippers outside your tatami mat room). Then there is another set of slippers for use only in the bathroom — the “benjo.” We were strictly instructed to wear the special benjo slippers only in the bathroom. It’s considered the height of bad form to forget and wear the benjo slippers out in the hallways. Poor Dennis. There were never slippers large enough for his size 14 feet and he looked ridiculous walking around with his heels hanging out and the slippers stretched nearly to the breaking point.

Another fascinating thing about Japanese bathrooms is the toilet gadgetry. Seats are often heated, an array of buttons allows you to get a blast of water or air from the front and/or behind, or to play waterfall or toilet flushing sound effects, and often there’s an extra spigot on top of the tank that splashes water over a little fragrance ball upon flushing.

Watch Out for the Wasabi 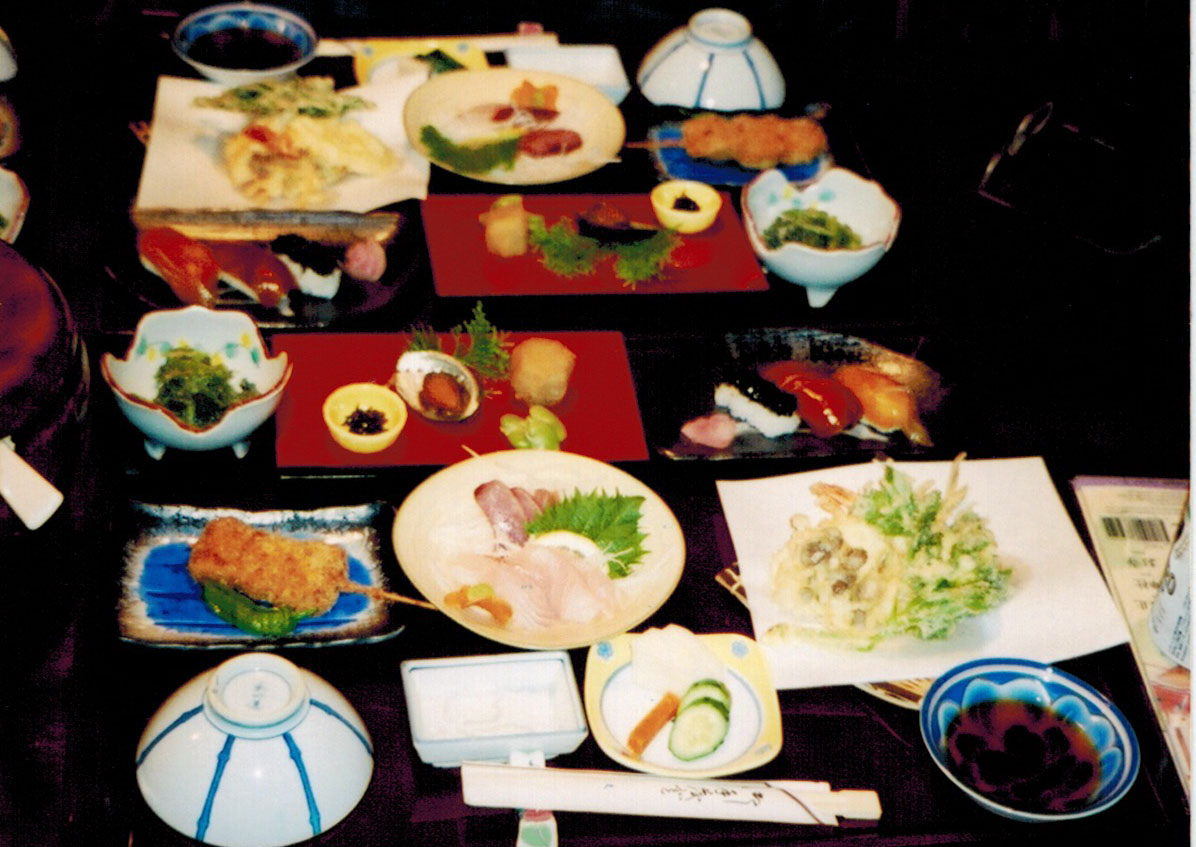 One of the benefits of staying at a minshuku is partaking in the elaborate kaiseki ryori set meals of Japanese delicacies, each in a different little decorative dish with some foods carved or shaped into flowers, birds, animals or other creatures. Although Dennis relished these dinners, the chain-smoking Swede practically starved because even though he claimed to love Japanese food, he ate very few of the exotic items set in front of him. I think he got all of his calories from whiskey and beer instead. Rainer, the German, mistook a big dollop of wasabi set atop a tiny carrot slice as something to be eaten in one bite instead of mixed in with the soy sauce for dipping. He leapt up, shouting in pain, his face cherry red and tears streaming from his eyes. It took his nasal passages quite some time to recover fully.

We spent only 24 hours on this delightful island, exploring the forests and coastlines for specialties like the Izu Islands thrush and the Ijima warbler, then caught the ferry back to Tokyo, keeping watch for seabirds en route. 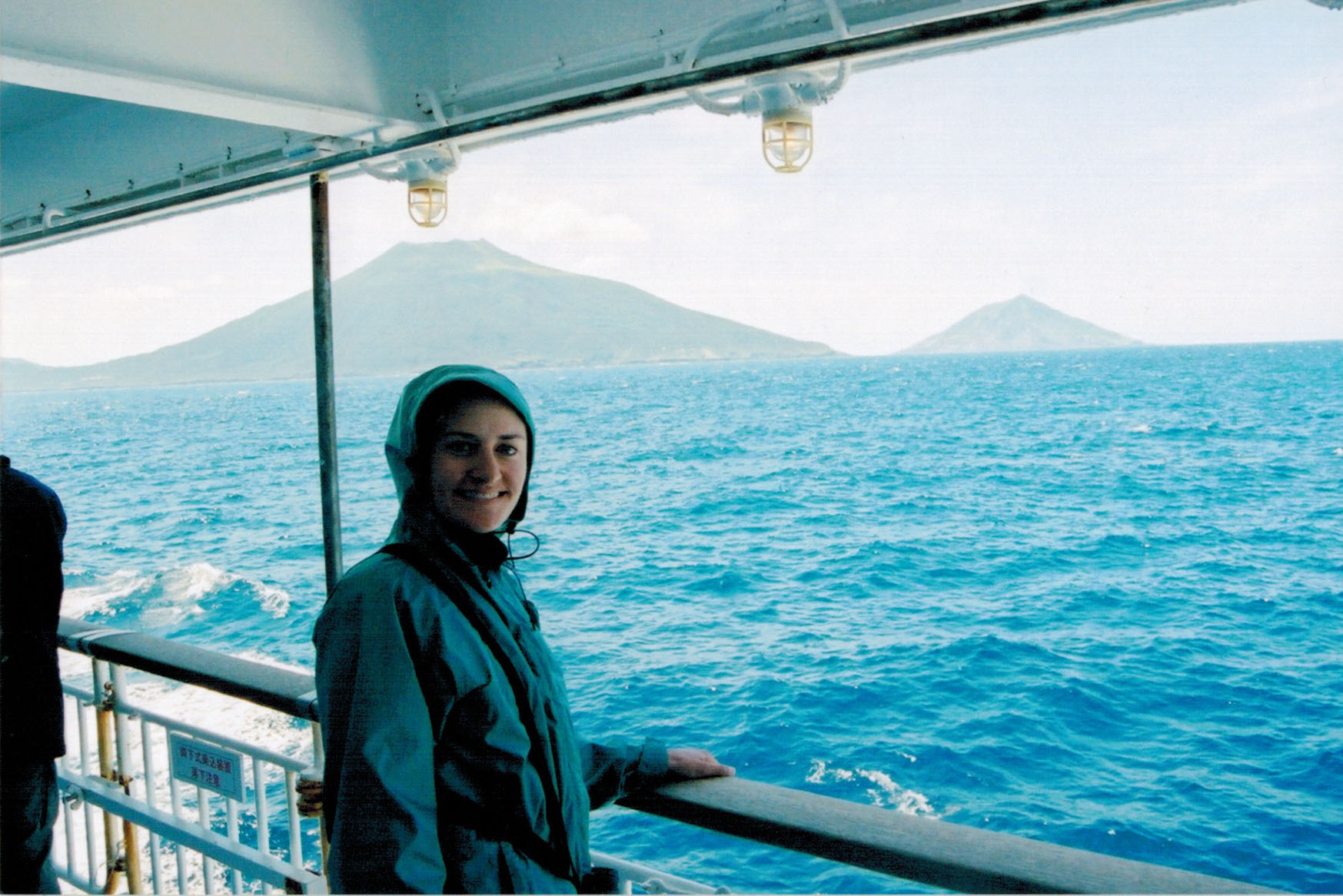 On the ferry, as everywhere in Japan, vending machines abound and you can get everything from beer, sake, canned coffee and ice cream to instant noodles, fried rice and spaghetti with meatballs, some of which the machine microwaves for you as a tiny recorded voice tells you in Japanese what’s happening at each stage of the cooking. Japan is, if nothing else, the land of vending machines. No matter where you go, even far out in the countryside, you’ll likely find a vending machine within a half-mile of where you are, or in the cities, a dozen feet away.