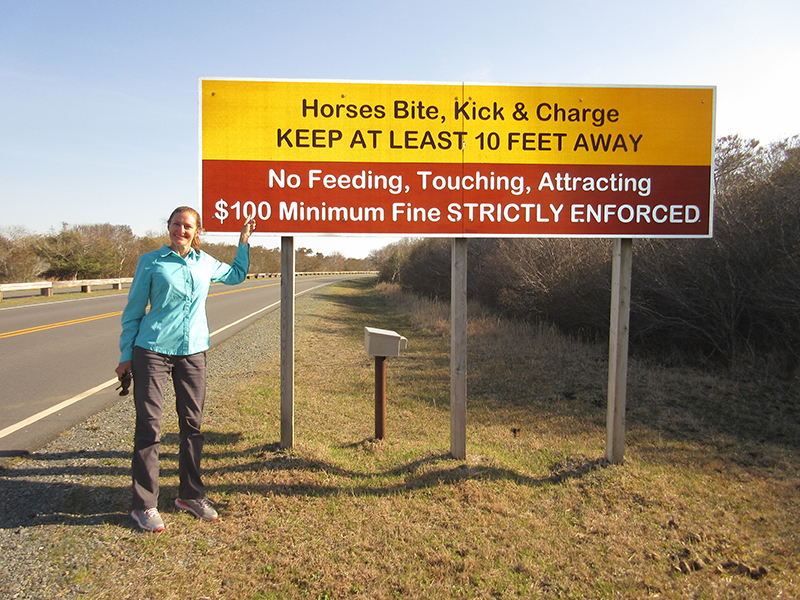 Assateague Island National Seashore, a barrier island that protects Chincoteague Bay, has a northern Virginia district and a southern Maryland district. We arrived shortly before dusk at our campground on the Maryland side and spotted a few of the feral horses that roam the island off in the distance. Park signs warn visitors to keep at least 10 feet away from the horses and avoid cooking or eating when the horses approach. Our assigned campsite had a trail of hoof prints leading through it but we found a sheltered niche against some brush that we hoped would be off the ponies’ path. During the night Hector heard (and our neighbors saw) four horses come through camp, happily leaving us unmolested in the tent. 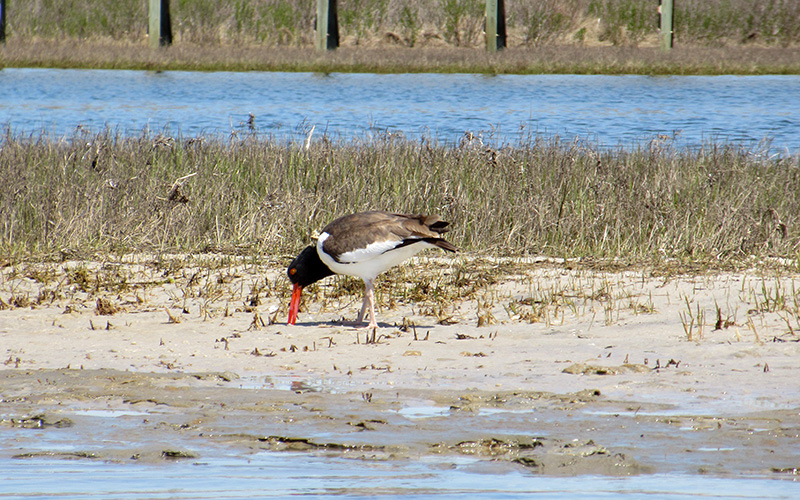 The northern and southern ends of the park are not connected by road, so the next day we drove inland and down to the Virginia side. The ocean surf was rough and the wind blew hard, so instead of a beach walk we checked out the abundant bird life in the nearby salt marsh. Oystercatchers, marbled godwits, willets, great egrets, gulls and terns had found rich feeding grounds there. We veered off on the Woodland Trail to a boardwalk overlooking a field in which two dozen horses were grazing, including one adorable little foal. We then took the Bivalve Trail toward the beach in a small bay. Chunks of lumber, old quilts and a mattress, a door and other debris were strewn on the beach in what we assume was the result of a hurricane, and in fact a large patch of forest along the Woodland Trail was full of downed and broken trees. That explained why so many people living on the roads into the park had firewood for sale in their front yards. 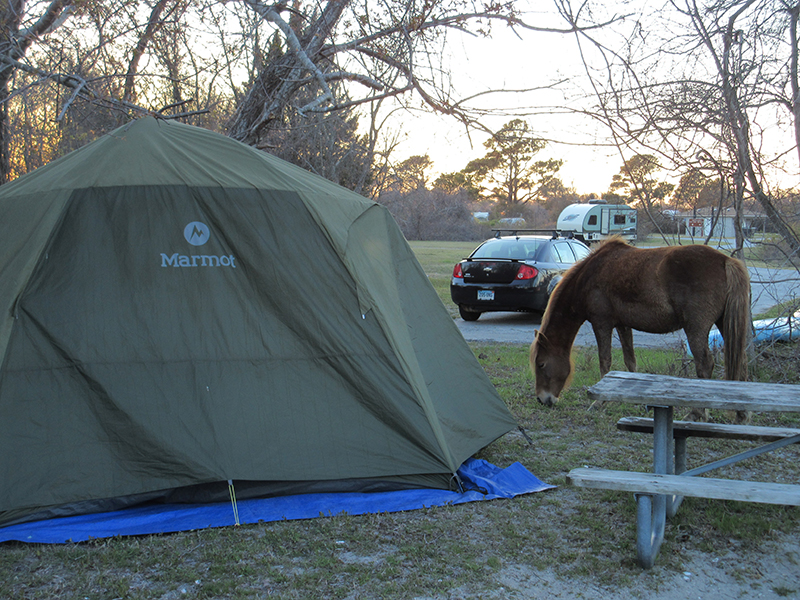 Back at camp just before dusk, three horses strolled in, taking one couple by surprise and chomping into their food. We realized we’d need to put anything edible in the car and everything else in the tent, so I stowed our half-cooked chili to wait for the horses to move on. They took their time visiting one campsite after another, with people shouting and trying to shoo them away. When they didn’t find human food available (for example, at our site as we waited in the car), they simply munched on the grass and moved on. 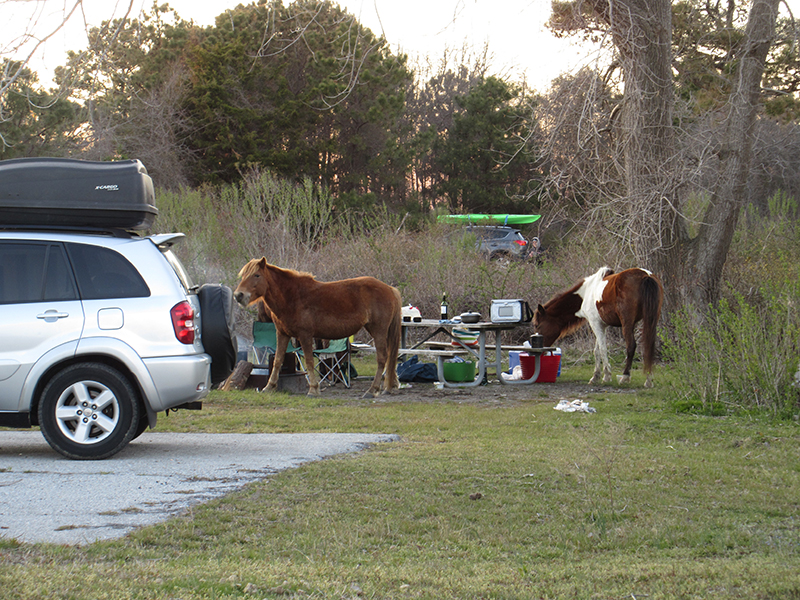 One couple, despite having a good 20 minutes to stow their stuff, finally dashed into their vehicle and watched as the horses knocked over boxes and coolers, eating everything in sight. The guy honked the horn from time to time, which only made the horses tussle and kick at each other. The couple was lucky a ranger didn’t show up and fine them for violating the horse safety rules. Once the horses moved on, we were able to continue cooking and eat our chili. The careless couple had to go into town for dinner. 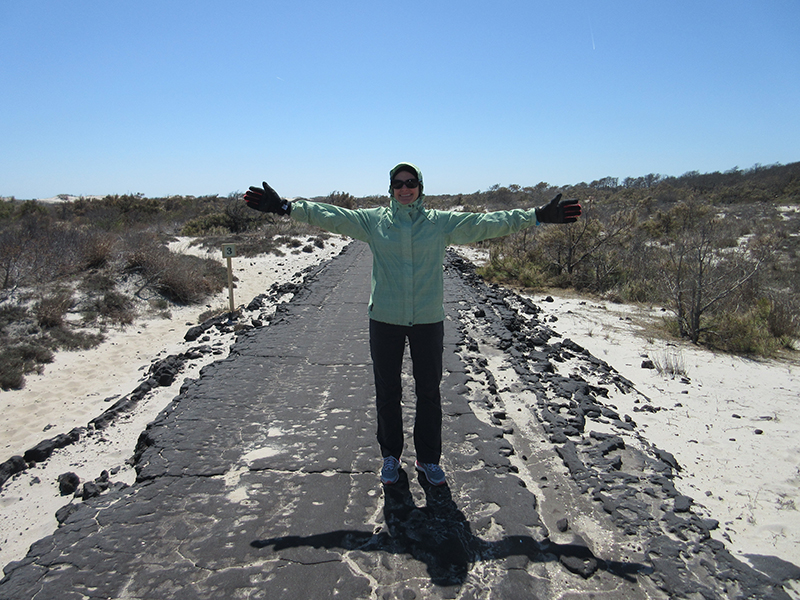 The next day we drove to the end of the paved road to check out the Life of the Dunes Trail. Along one stretch it followed the remnants of the old asphalt Baltimore Boulevard that spanned 15 miles down to the state line with Virginia back in the 1950s. A 1962 storm destroyed much of the road, scuttling plans to develop 9,000 home lots on the island. That storm helped demonstrate the foolishness of building on a barrier island, and three years later the National Park Service created the national seashore to ensure its protection.

Next we went to the Life of the Woods Trail that led out to the inland salt marsh, and on the way we saw two unfortunate things. First was a tiny bat trying to fly, crawling his way on the forest floor and a few feet up a tree to launch himself on the wing. After a short flight he flapped to the ground, where he again crawled his way to the tree and hurled himself into the air once more, still to no avail. Poor little thing. We didn’t see on him any evidence of White-nose Syndrome that has devastated bat populations in the East, but we knew he had to be sick or injured.

Before we could find a ranger, however, we noticed the second unfortunate sight. Hector looked down at his feet and saw nearly a dozen ticks crawling on his boots, socks and pants. Signs everywhere in the park warned of ticks, and our camping neighbors had told us that most vegetated patches of land in the area outside the campground were tick-infested. (The Park Service may want to consider renaming Assateague to ’Ats-a-tick.) Hector thought he brushed them all off, but by the next morning during the full-body tick check — which has become a daily ritual when we’re hiking or camping — he had one embedded. It tried to scamper away as soon as I extracted it with tweezers, but we managed to catch it and crush it. The threat of Lyme Disease strikes fear into our hearts. However, if you can find and remove a tick within 24 to 48 hours of a bite, the chances of contracting this potentially crippling disease drop dramatically. 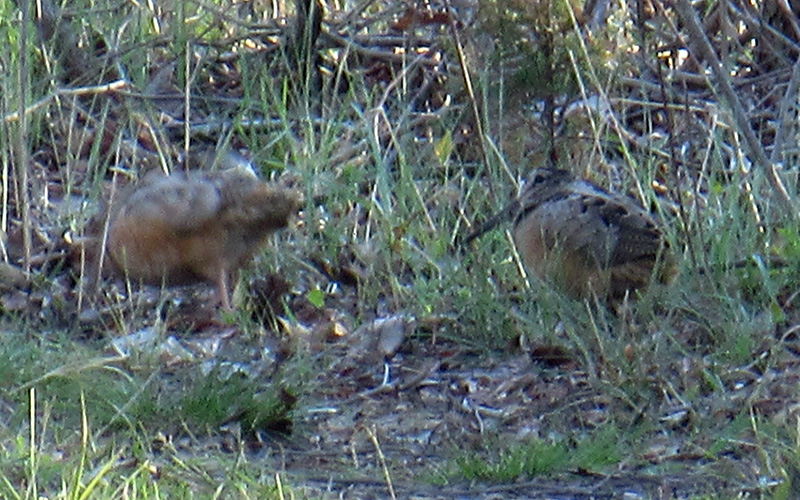 One sight that struck joy into our hearts, however, was a group of woodcocks that emerged at the edge of the brush each afternoon before dusk. Photographing these secretive birds was difficult. Serenading brown thrashers, cardinals, marsh rabbits and squirrels cavorted on the campground lawn and, combined with beautiful sunsets across Chincoteague Bay, made up for the marauding horses. 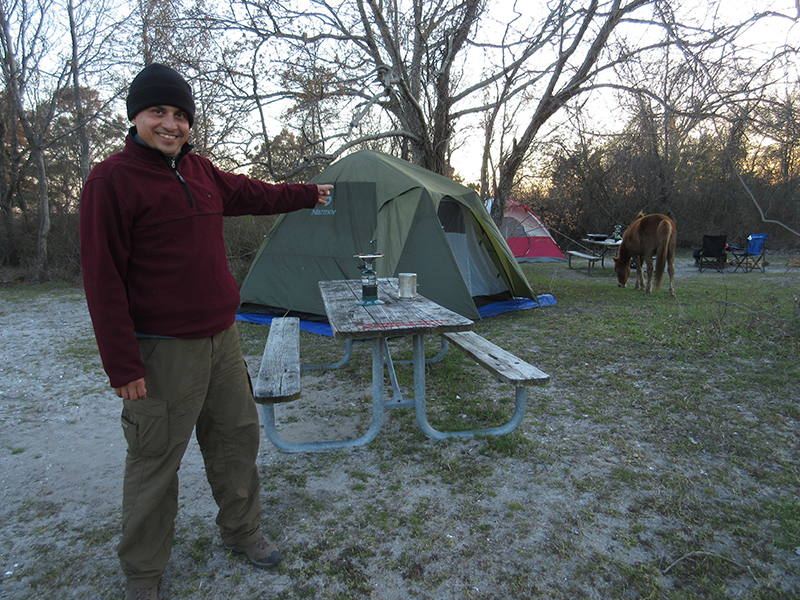 The horses came through camp each evening and sometimes around breakfast time as well, so we had to eat several meals in the car during our visit. When the ranger happened to cruise by in his truck, the horses would move along. We learned from the park film that the horses have learned to recognize Park Service uniforms and vehicles and give them a wide berth. That’s because of a birth-control vaccination program the Park Service has in place to keep the population at a sustainable level; the horses often stay maddeningly just beyond the reach of the vaccination dart guns.

On our last full day, the wind calmed down enough for us to get the kayaks out. We launched from the Old Ferry Landing, where several people were out clamming with rakes and buckets and others were crabbing, which you can do here as long as it’s only for your own personal consumption. We paddled for a few hours in the salt marshes between the boat launch and the skinny spit of land upon which our campground sat. The water was shallow and sandy-bottomed in many places, with clam clusters lining the banks of the channels and inlets. While searching the seagrass for the other horses that call Assateague home — seahorses — I kept seeing these pinkish-orange, semi-transparent blobs that looked like balled-up pantyhose and seemed to be attached to the bay floor. I’m not sure if they were jellyfish without tentacles or something called sea pork (comment below if you know what they are; too bad we didn’t get a photo). 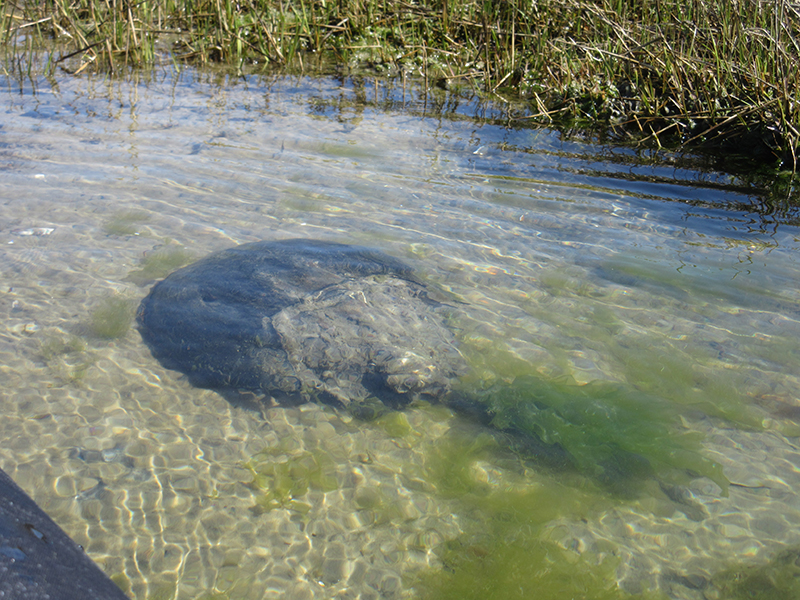 I also spotted what looked at first like the empty shell of a horseshoe crab, but it turned out to be alive and well swimming in the shallows. A local woman back at the kayak launch was delighted by the news, saying that the return of horseshoe crabs was a sure sign of spring. And being the warm-weather creatures that we are, we’ve been glad about any sign of spring we can find this year away from sunny Arizona.

10 thoughts on “Horsing Around at Assateague”