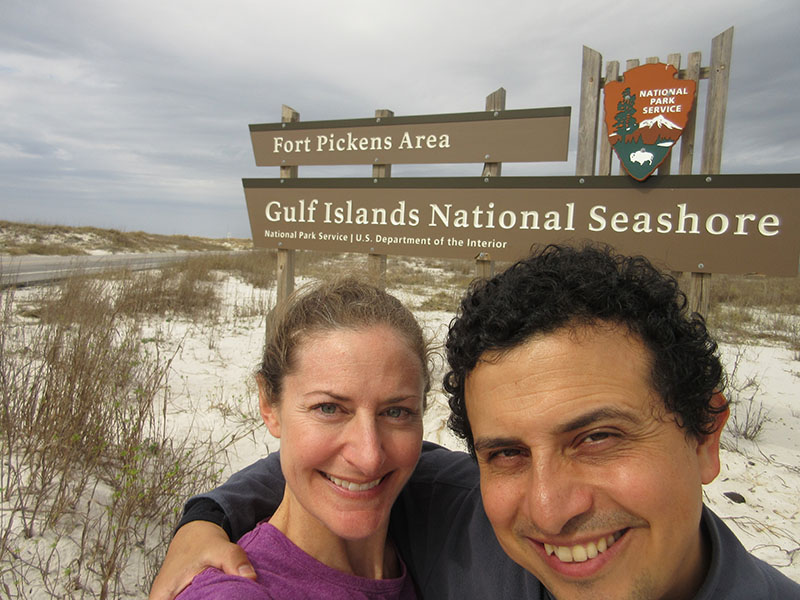 The sky was dark and the forecast called for rain as we departed New Orleans and headed east through little snippets of Mississippi and Alabama on our way to Florida. Hector had awoken with a sore throat and chills so I hoped the Sunshine State would do him good. Alas, the clouds and cool temperatures stayed with us.

Late in the afternoon we drove through Pensacola Beach to the Fort Pickens section of Gulf Islands National Seashore at the far western end of Santa Rosa Island. We wondered how this skinny strip of white sand dunes could hold its head above water. As we pulled into the campground, set in a lovely grove of trees, we were excited to explore the park on foot and by kayak the next day.

Right after we set up the tent and were continuing to unload the car, a park volunteer drove up in a golf cart and said, “Oh, good, you’re packing up.”

“Didn’t they tell you about the evacuation?” 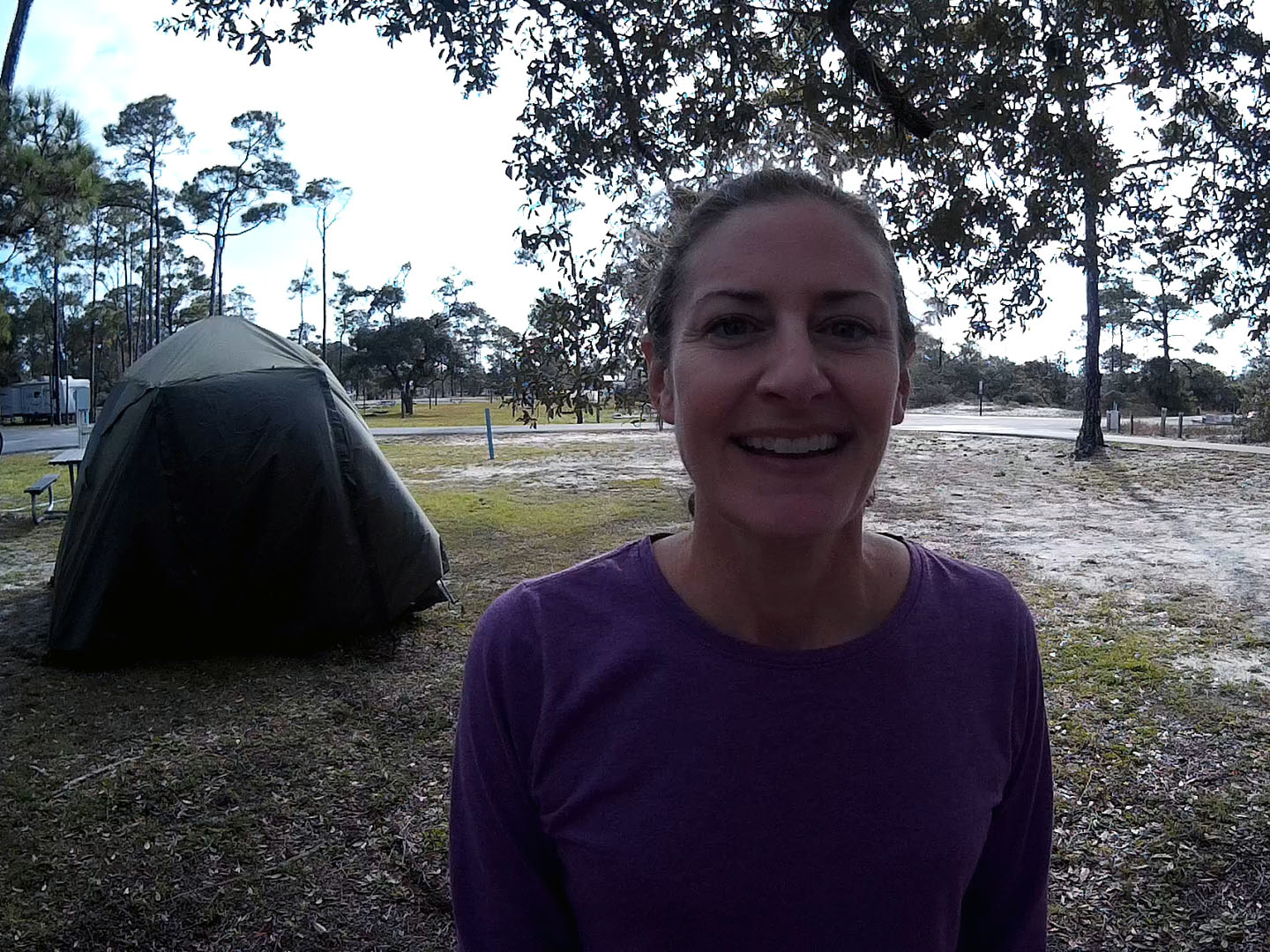 What? We expected rain for a few days but figured we needed to stop being babies about the weather and camp anyway. The woman said overnight rain was predicted, with a brief clearing in the morning before a second phase would blow in with gale-force winds of up to 60 miles per hour and high waves that could flood the only road into the park. Worse yet, waves might dump up to several feet of sand on the road, making it impossible to get in or out for days. Turns out this skinny strip of white sand dunes doesn’t always hold its head above water.

We could stay the first night but would have to evacuate by noon the following day. Now we really did feel homeless! She suggested spending the next night in a Walmart parking lot and then calling the park the day after to see if they would reopen after the storm so we could return. Oh, boy.

The rain arrived around 4 a.m. and pounded the tent for a good hour and a half. Come daybreak, we were happy to discover that the tent could withstand heavy rains as well as high winds, but staying was not an option. Rangers would fine anyone still in camp by noon. We packed up, truly dismayed at our timing. Gulf Islands looked like such a great place for beach-combing and hiking along the Florida National Scenic Trail. 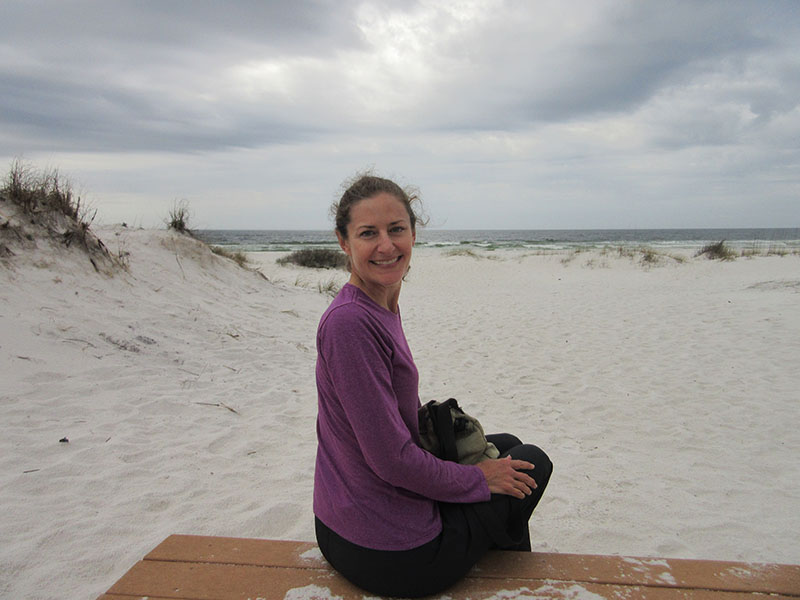 We stopped briefly on our way out of the park to walk out to the beach and hoped the storm would be lighter than predicted. Not ready to leave this pretty area just yet, and with Hector feeling miserable with fever and chills, we checked into a motel in Pensacola Beach rather than driving to a Walmart parking lot. As Hector slept all day, I watched the sky for the possibility of going for a walk but the wind was relentless. 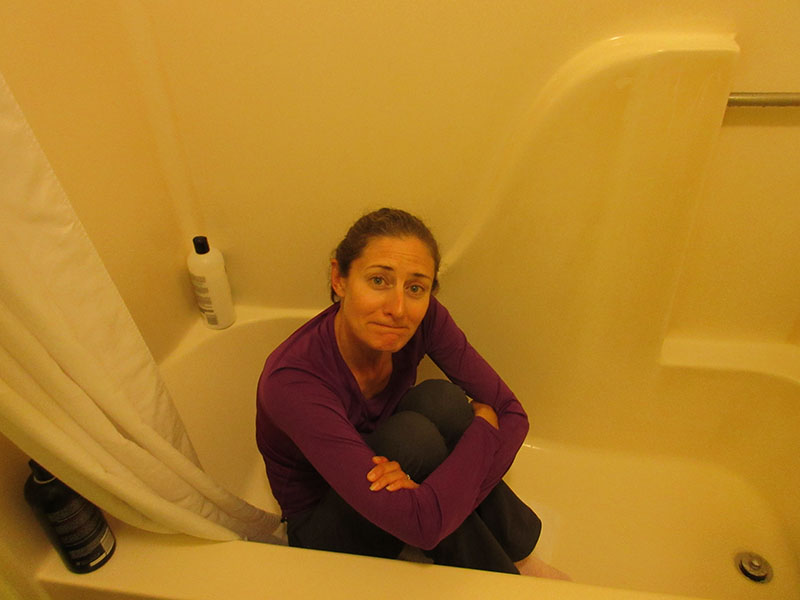 By 5 p.m. the rain blew in, and news alerts announced tornado warnings for the Pensacola area and beyond until 8:30 that evening. I moved our valuable belongings into the bathroom, and with the wind howling and the rain lashing violently outside, I moved myself into the bathroom, too. Hah! A Walmart parking lot would have been a very bad place to spend the night indeed.

The next morning I learned from the front desk clerk that a tornado had touched down on the mainland north of us. We also saw on the news about storm damage and fatalities to the west in Louisiana. Hearing of our need to evacuate the national park campground, the clerk recommended Bear Lake as a good alternative for camping, hiking and kayaking not too far away if indeed Fort Pickens remained closed for a few days.

Okay, Let’s Try Another Section of the Park

We checked out of the motel and drove back across the bridge to the park’s Naval Live Oaks Visitor Center on the northern side of Santa Rosa Sound. Inquiring about the status of the road to Fort Pickens, we discovered that it would be several days before the road would be cleared for visitors to return. Our least expensive option was to camp at Bear Lake.

In the meantime, though, we figured we’d watch the short film on the natural and cultural history of this section of Gulf Islands National Seashore and learned about the role that forts played here, especially during the Civil War. Interestingly, Fort Pickens was a Union stronghold and Fort Barrancas across the water was a Confederate stronghold. At one point they even shot cannons at one another! Too bad we had to leave camp before being able to explore the fort.

The film also highlighted the role of barrier islands like Santa Rosa and the other islands here in the national seashore — to bear the brunt of storms from the sea and protect the mainland from devastation. Santa Rosa Island had apparently served that function well the night before. The Gulf Islands also serve as a loggerhead turtle nesting site and harbor a wealth of other animals and plants. 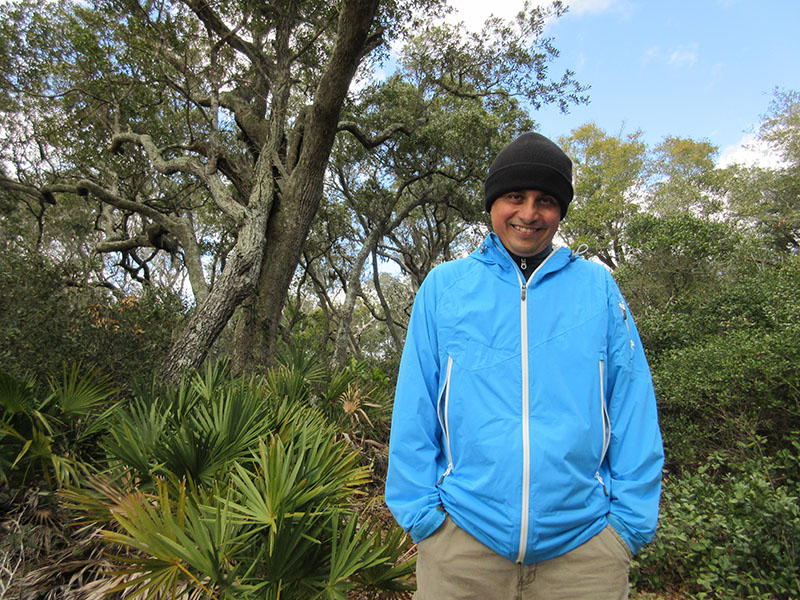 From the exhibits at the visitor center, we learned that the Naval Live Oaks area was established as the nation’s first federal tree farm in 1828 to cultivate live oaks — with wood stronger and denser than that of pines — for use in shipbuilding. Wanting to take as much advantage of our park visit as possible, I suggested a walk through the live oak forest to see some of those big twisty trees. I give Hector credit for hiking despite still feeling under the weather.

We were sad to have to give up on this park but happy that we survived a spell of nasty weather. Our low budget for Project 100 dictates camping as much as possible, which underscores how we really are at the mercy of the elements. I’ll highlight some of the other elements we’ve had to face in a future segment on Everglades National Park. But first, see how we fared in Bear Lake.

16 thoughts on “Gulf Islands, We Hardly Knew You”