Our next stop was the Chattahoochee River National Recreation Area in the suburbs northeast of Atlanta. This National Park property covers 48 miles of the river, although the land-based park areas are dispersed into multiple sections at various points along the river’s course. We got extremely lost trying to find the entrance to the Island Ford section. There is no park signage in the swanky Norcross-Peachtree Corners neighborhood that surrounds Island Ford, and the website lacks driving directions. It merely links to a point on Google Maps that makes it look like the Visitor Center is accessible from multiple routes. It is not.

Once there, however, the ranger on duty helped us determine the best use of our time. Most visitors choose to float the river, but water releases from several dams along the water course require careful calculation of how long it will take for the water level to rise downstream in order to enjoy the river safely. 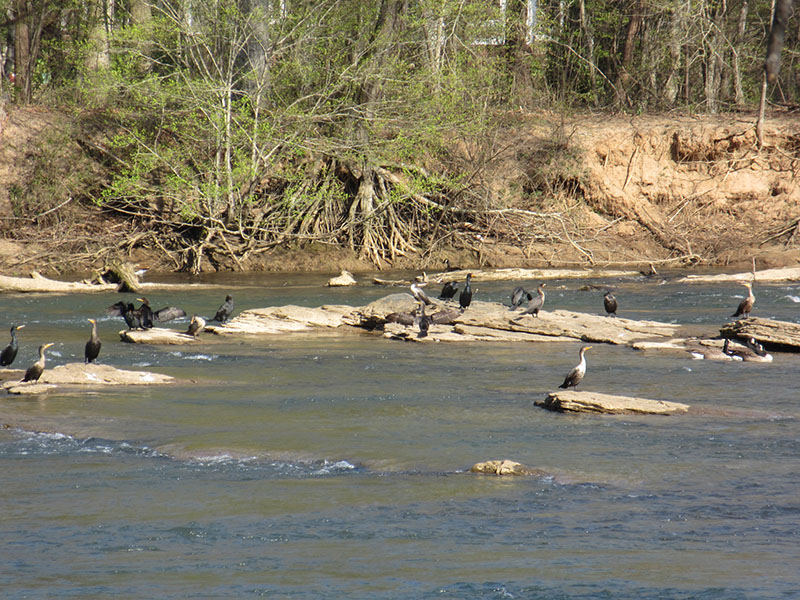 So instead of kayaking, we opted to hike the first day. We took a path that followed the river downstream past the Island Ford shoals, at which dozens of honking geese and cormorants dabbled in the shallow water and perched on the exposed rock. 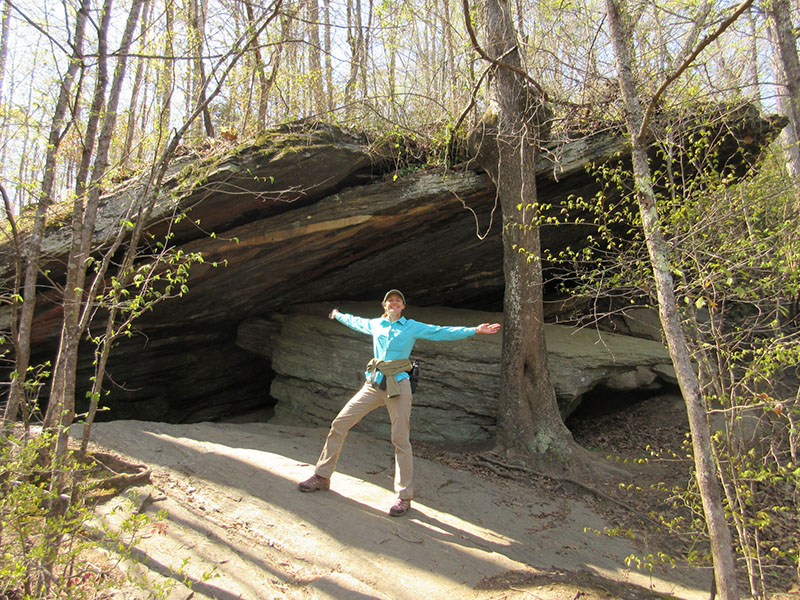 We continued on past large overhanging rocks, then looped around on several trails that climbed above and out of sight of the river. Here, the sunlight filtering through this patch of mostly deciduous forest — whose trees were just starting to leaf out — colored the scene in the tawny hues of fall. The air was crisp as on a fall day as well. 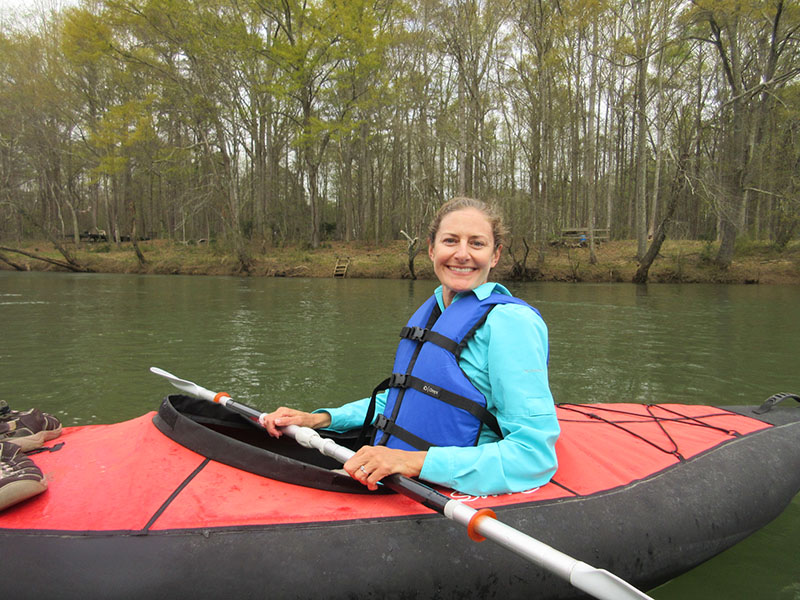 We checked the dam release schedule the next morning and headed over to the Island Ford kayak launch. The ranger on duty thought it would be an easy paddle about five miles up the slow-moving river to Gerrard’s Landing, and then we would have a leisurely float downstream before high water arrived from the dam release upstream. We set off very confident in our abilities. The going was slow but steady for about an hour, and the songbirds seemed to cheer us on from the trees on the banks. 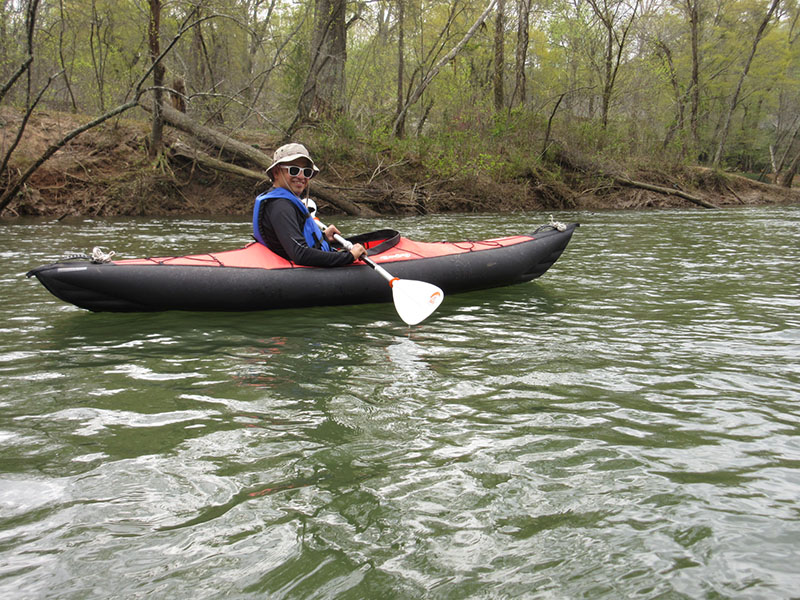 Then we arrived at a few ripples and the going got tough. I paddled as hard as I could for nearly ten minutes, telling myself that I could make it through the shallows to slower-moving water and continue upstream. I finally had to give up, float downstream and try another approach near the left bank. That path got me through, although it left me tired and panting. A short distance more, as Hector caught up to me and we came to a small island in the river, we realized that we would never make it to Gerrard’s Landing at this pace before the water would start to rise. So we turned around, and in less than 15 minutes the current had us back at the launch site.

The next day we drove north and east to Clarkesville to meet our good friend Michael, who had just moved there from Phoenix. Clarkesville is a tidy, bustling little burgh with a charming downtown historic area. We had lunch in town and then drove north to Tallulah Gorge State Park. In addition to being in a beautiful natural setting, the nearly 1,000-foot-deep gorge might sound familiar because: 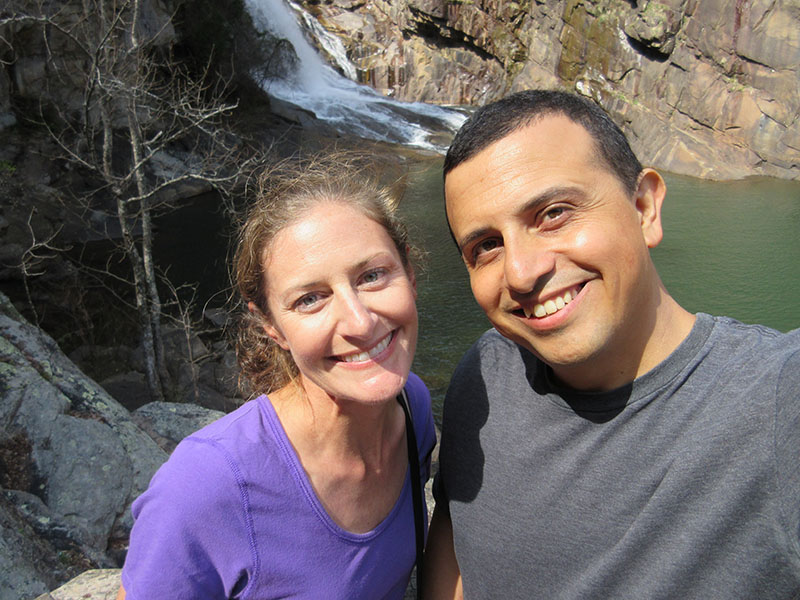 It was a pleasant day for a stroll in the woods along the path on the gorge rim. We walked down the 300+ steps to the suspension bridge that crosses the gorge above the falls, then another 200+ steps down to the viewing platform for Hurricane Falls. The hike back up left us huffing and puffing for a bit, but we enjoyed being able to hang out with Michael for a few hours at an unhurried pace. Spending time in conversation with people we know — as opposed to strangers we meet on the road — is a welcome treat for us.

On that note, check out our route map and progress map and let us know if you’d like to meet up somewhere along the way!