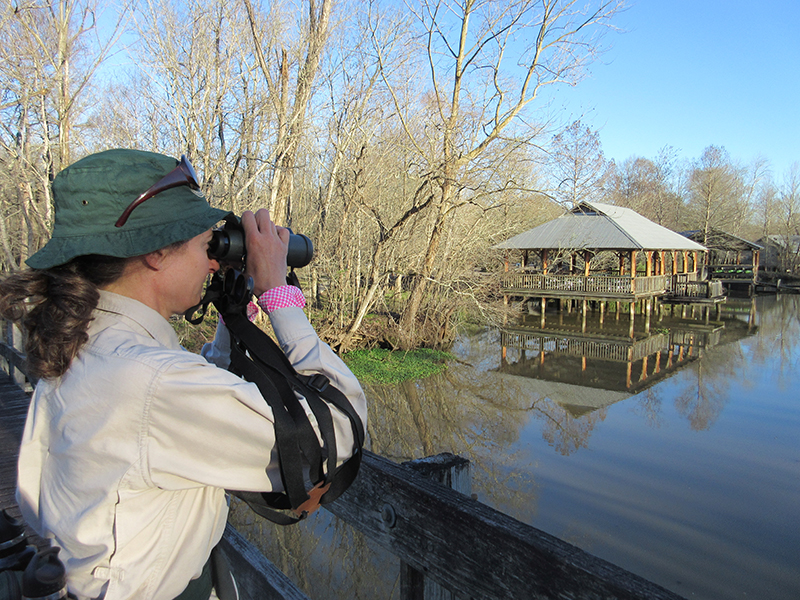 The beauty of an extended road trip is the ability to tweak our itinerary and destinations as we go along. With a focus on national parks, we hadn’t planned on visiting many state parks but saw Louisiana’s Lake Fausse Point State Park on the map and thought it might be worth checking out for a few days of camping, kayaking and birding. We were so glad we did.

Here in southern Louisiana, near the small town of St. Martinville, we were in the heart of Cajun country. On the road running below the levee for Bayou Chene, ramshackle homes and trailers show the poverty in this part of the state, which in 2014 was the third-poorest state in the Union. We were also in the heart of boat country. Many rural people have small boats for fishing or merely getting around the interconnected bayous, swamps and waterways.

We pulled into the campground just before the office closed and took a quick spin around to select our site. Other than the paved road and pull-ins, the entire campground was swampy. For two dollars more per night, we opted for a “premium” site right on the water with our own small boat dock. Most other campers were in motorhomes, but we chose a spot next to another tent camper with kayaks pulled up next to their small car.

The friendly father-daughter team from Ontario, Patrick and Erika, were on a three-week camping and kayaking trip to explore the wetlands, food and culture of Louisiana. They had been there for a few days and told us that the swampy campground conditions were the result of the same storm system that we experienced in Beaumont, Texas, the day before. After dinner they invited us over to their campfire, and we had a great conversation about conservation, kayaking, Canada and more. They gave us the lowdown on where to hike and paddle the next day, and where to see alligators (if we wanted to).

Here as in our campground along the Natchez Trace, a pair of barred owls began hooting and remained vocally active for nearly half an hour. Frogs struck up a chorus, adding to the nighttime bayou atmosphere. We expected the mosquitoes to be vicious given the water-logged conditions here, but other than a few that bit through our pants and socks around dusk, they weren’t bad. Coming back from the restroom, we heard some snuffling in an empty campsite and shone our headlamps on an armadillo, which I had been wanting to see since entering Texas weeks before. 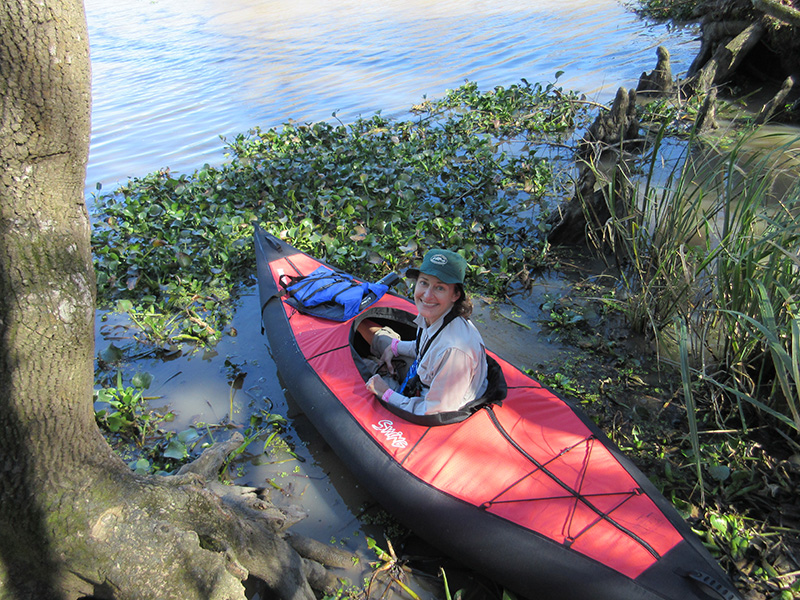 The next morning after breakfast we inflated our kayaks and put in next to our dock. At first I was afraid to enter the murky water, edged with water hyacinth that could harbor water moccasins. But in order to get out on the water I had to get my feet wet. Not five minutes after pushing off, we saw our first alligator! It was a small, shy one but I still felt a little uneasy paddling inflatable watercraft next to a creature that could puncture my vessel with one snap of its jaws and send me slowly sinking into the swamp.

The neighbor camped on the other side of us came along in his canoe and told us about several gators in a pond just around the corner from the main channel. We decided to paddle in, and there we saw numerous snouts poking up above the water’s surface. We had been told that most alligators, especially the small ones, prefer to slip into the water like a turtle (and we saw those, too, sunning themselves on logs) when approached, but we did our best to quietly paddle by so they wouldn’t feel threatened. Nonetheless, it was unsettling as we passed larger and larger alligators, several of which seemed grin at us suspiciously.

From among the park’s several canoe trails, we chose the two-hour loop that circled past some of the canoe-in campsites. However, we spent so much time checking out birds in the forests on both banks of the bayou (an osprey, great blue heron, great egret, belted kingfisher and an assortment of woodpeckers) that it took us four hours to complete the circuit. It was a gorgeous, sunny, calm-water day and I became more relaxed paddling past the gators. Fishermen and boaters on motorized craft were kind enough to slow down when they saw us to avoid a wake. We loved being out on the water, moving at our own pace, and enjoyed ourselves so much that it was only hunger pangs that drove us back to camp for lunch. 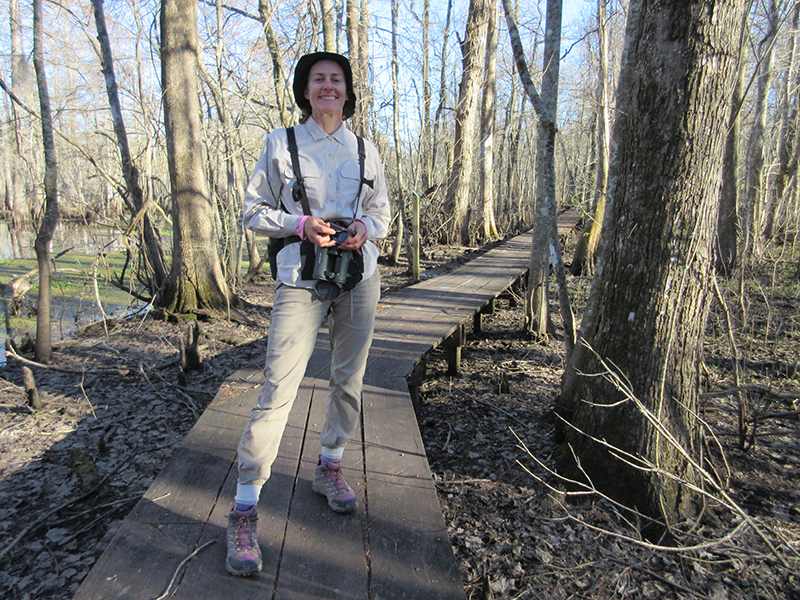 We went for an afternoon hike through the swamp, hearing a great deal of birds but staying on high alert for alligators as we walked. We startled one squirrel that dashed off into a bog and in turn startled an alligator that jumped into the water with a noisy splash.

At nightfall we had a campfire of our own. Soon enough we heard rustling in the dry leaves and splashing in the water-filled depressions just beyond the light from the campfire. Oh, no! Could alligators be waddling through camp? They are more active at night, after all. But shining our headlamps into the darkness, this time we saw not one but two armadillos animatedly chasing each other. The frogs and barred owls fired up their nighttime activities as well before we headed into the tent for our final night’s stay in this cool little corner of Louisiana. As with nearly every other stop on our journey so far, we weren’t ready to move on but had plans to meet my brother, Matt, in New Orleans and packed up the next morning for the onward, eastward trip.

13 thoughts on “Camping in Alligator Country”