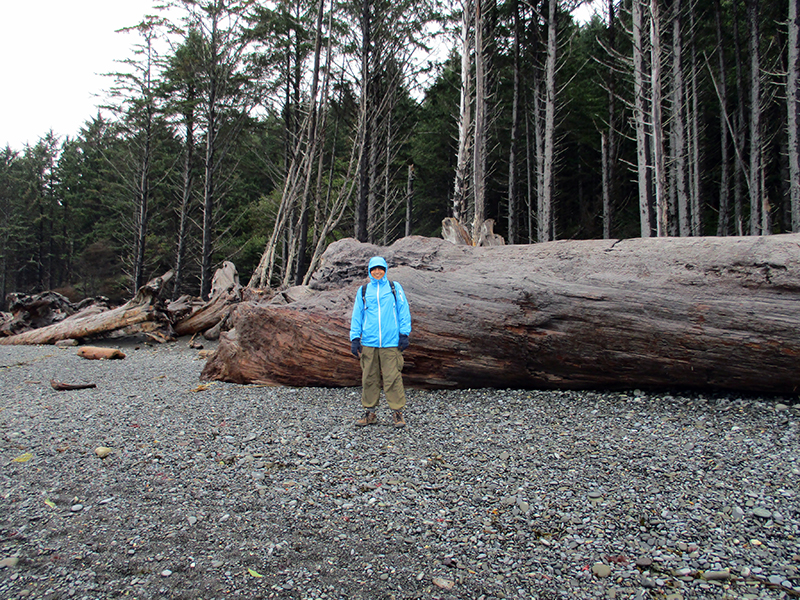 There’s no denying that water is the lifeblood of Olympic National Park, whether it crashes in from the ocean, falls from the sky in sheets of rain, collects in tranquil lakes or tumbles down forest cascades. On our third day in the park, we drove west to the Mora section to get our first taste of the Pacific Ocean during Project 100. The fallen remnants of once-mighty trees chiseled by the wind, sand, and salty air lay scattered on pebbly Rialto Beach. Walking on the beach becomes risky at high tide, when the strong surf tosses the fallen logs about and turns them into lethal projectiles. 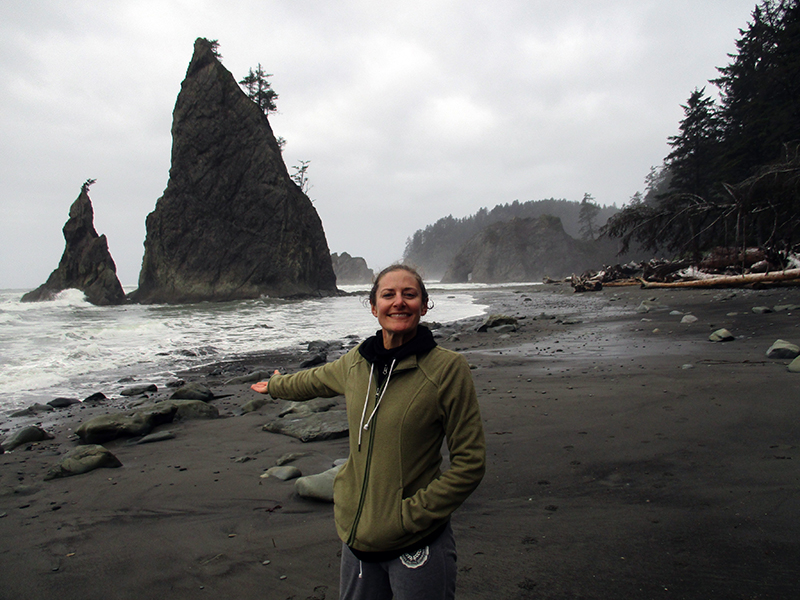 Fortunately, we arrived at low tide. The pebbles turned to sand as we strolled north to view Split Rock and Hole-in-the-Wall, a rock arch jutting out into the sea. The clouds and misting rain, the sound of crashing waves and gulls cavorting overhead, and the tall evergreens fronting the sea gave us a palpable sense of what the Pacific Northwest is all about. 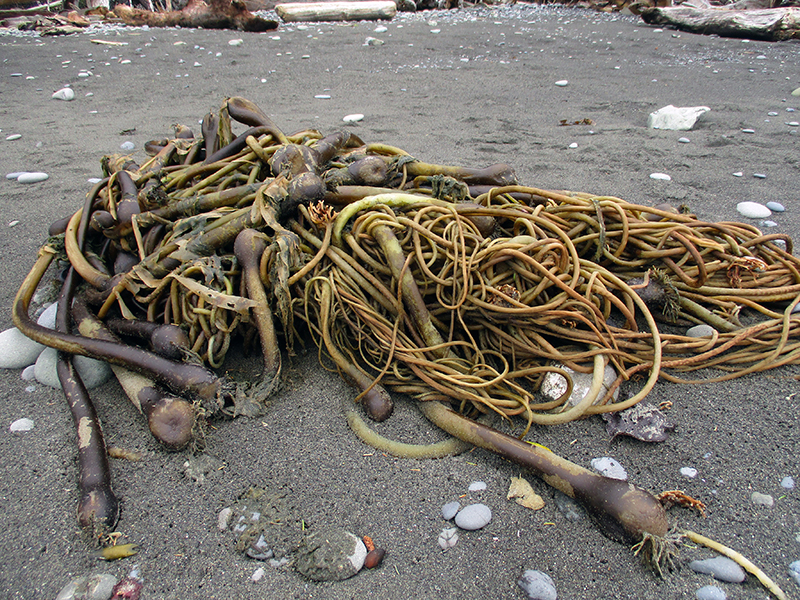 We delighted in beach-combing here, feeling like we could spend hours looking at pebbles and poking at large tangles of ropy seaweed resembling oversized green spaghetti that had washed up on the beach. 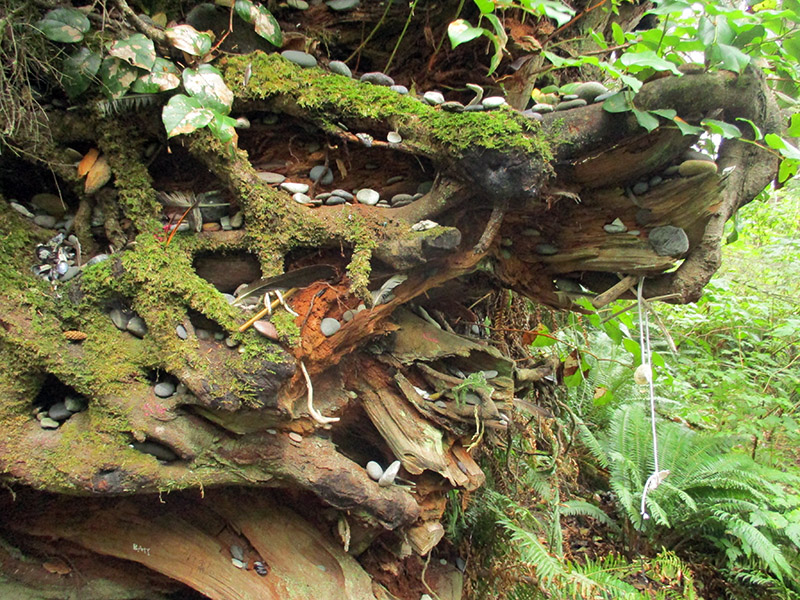 Next we headed south across the Quillayute River to La Push, a Quileute tribal town. Just south of town, we hiked through dense woods to Second Beach. Nearing the beach, we came across a large, gnarled tree root festooned with rocks, ribbons, feathers, shells and other bric-a-brac. We thought it might have had some kind of tribal significance, but it seemed to be the product of hikers who leave a small offering, perhaps for good luck like the visitors who rub Abraham Lincoln’s nose at Oak Ridge Cemetery. 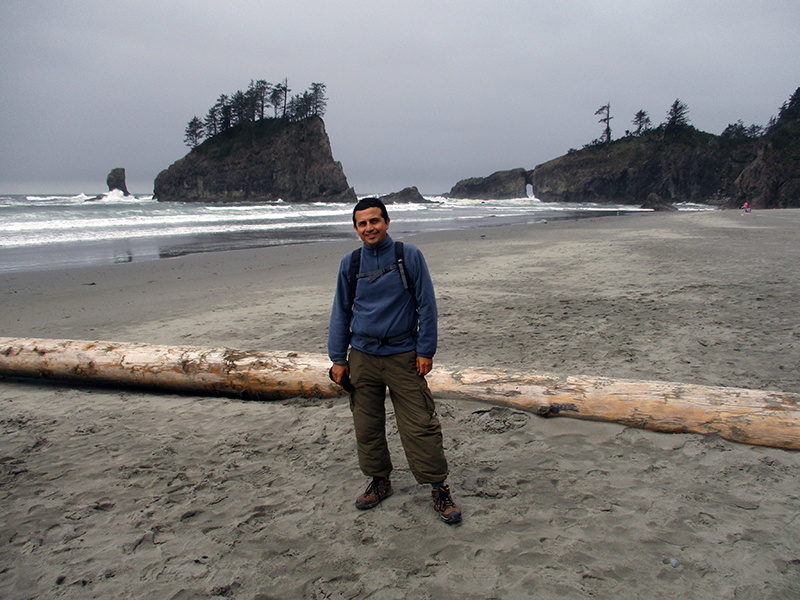 Just off the water’s edge at Second Beach, sea stacks — rock columns created by wave erosion — topped with conifers and swarming with seabirds add to the area’s sense of other-worldliness. We wanted to explore the beach further, but once a squall off the coast came roaring in, we decided to take shelter from the sheets of rain back at camp. 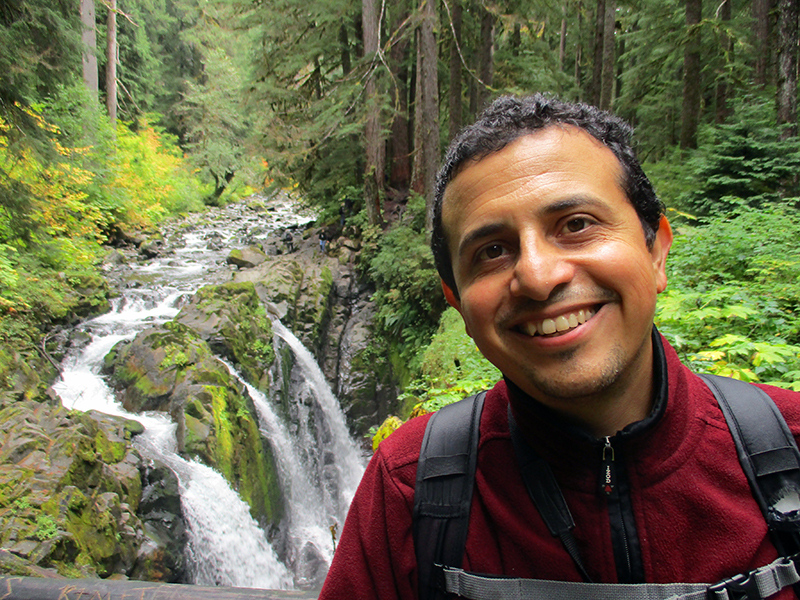 We took advantage of the excellent trail system in the vicinity of our campground the following day. We joined the Sol Duc Falls Trail from our campsite and hiked through dense lowland montane forest along the Sol Duc River, which teemed with water from the overnight rain. Trees draped in moss and ferns carpeting the forest floor painted a scene of uncountable shades of green. In the muddier sections of trail, the soil was a rich, deep black. 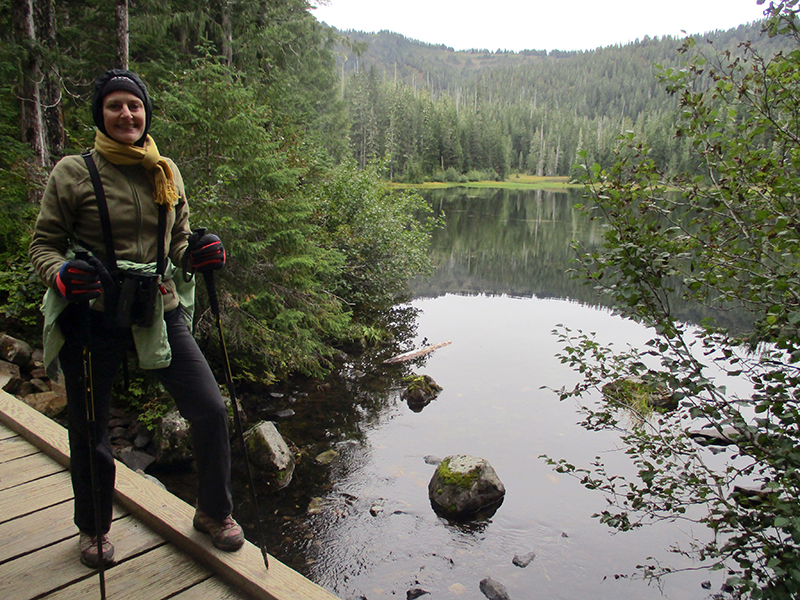 Past the waterfall, we proceeded uphill another three miles to Deer Lake. Much of the trail lay next to or within earshot of Canyon Creek, which flows from shallow Deer Lake down the mountain in a series of waterfalls and pretty pools. Even though the path became drier and steeper as we climbed, the weather grew cloudy and quite cold. We quickly ate our picnic lunch on the lake shore, and before heading back down the trail, I noticed a thicket of wild blueberry bushes. I collected as many as I could before my fingers froze, and wrapped them up for a sweet treat back at camp. 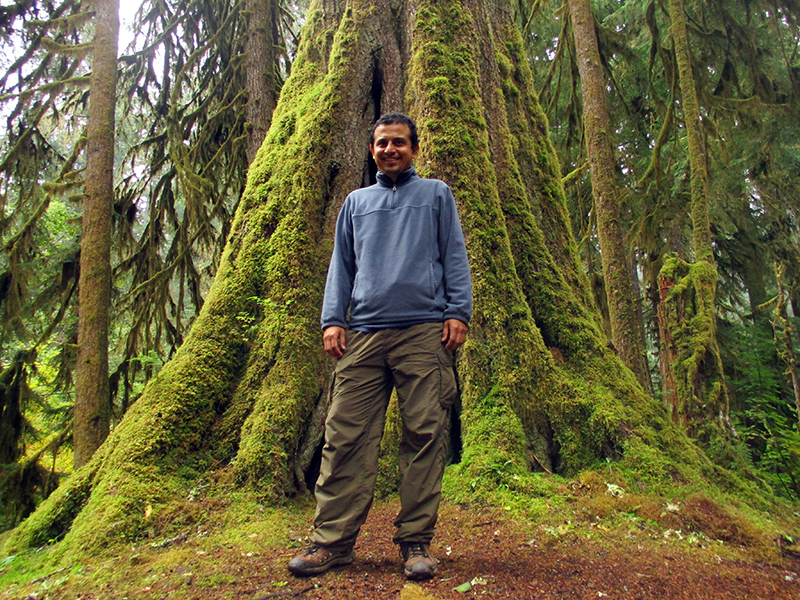 Returning on the path from Sol Duc Falls to our campground, amidst the enormous trees, we felt as if we were creatures in a giant’s terrarium, tiny frogs picking our way through the thick foliage. We looked up through the canopy and imagined that at any moment colossal children would come into view and peer down at us in wonder and amusement. 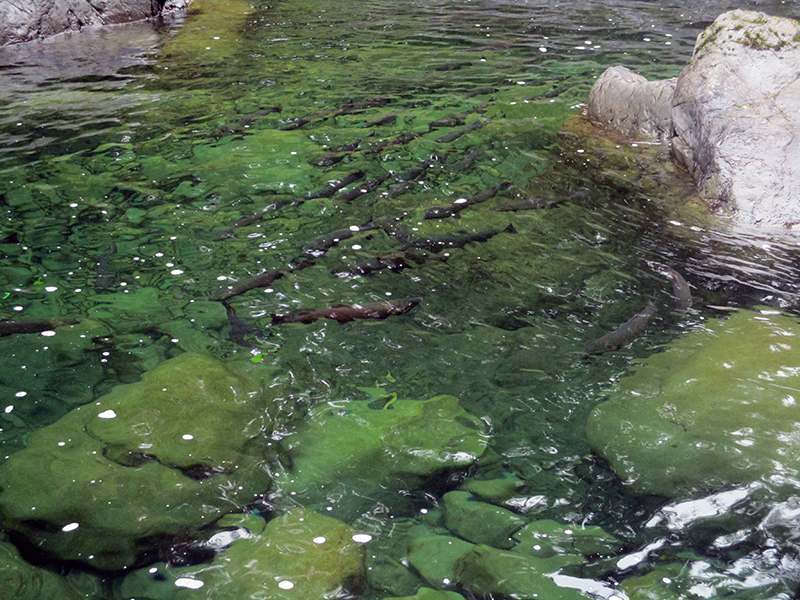 The morning of our departure, we stopped at the Salmon Cascades along Sol Duc Road to see whether any salmon were present in the Sol Duc River. A large school of salmon sat stacked up in a calm stretch of river downstream from a rocky waterfall. They seemed to be waiting for the right moment — or perhaps they were gathering their strength — to shoot forward and attempt the gravity-defying leap through the pounding water. A few intrepid souls swam forward as if on a scouting mission, then returned to the school to give their reconnaissance report. We waited with dozens of other people on the river bank to watch the drama unfold. 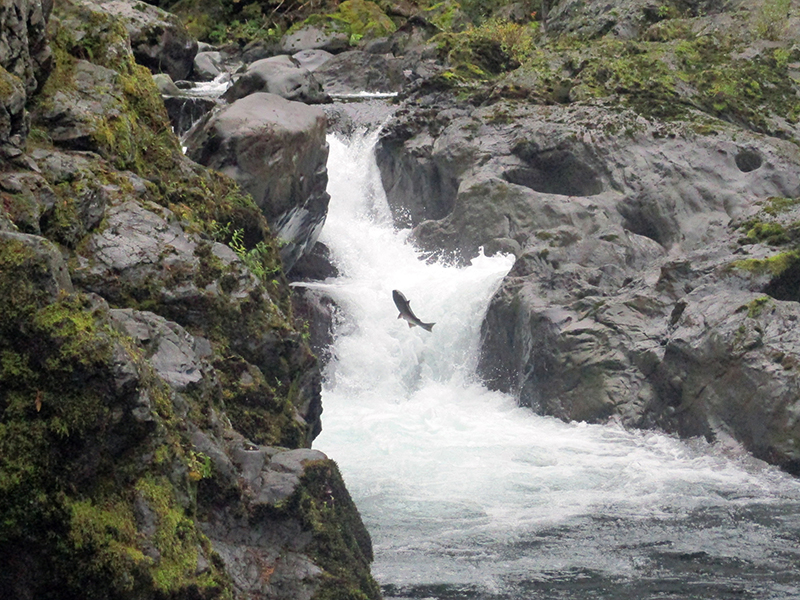 Finally, a few darted forward and leapt out of the white spray with all their might. Most of them, sadly, smacked against the boulders in the narrow passage and fell back downstream. We couldn’t tell whether any made it, so we climbed above the falls to see whether any salmon continued upstream. It seemed like such hard work, and it was heartbreaking to see them fail. I wanted to cheer them on with a hearty, “Go, little fish, go!”

Standing at the water’s edge watching this awesome natural occurrence made me realize that, when you think life is tough and obstacles seem insurmountable, it pays to consider the salmon. They have to find their way from their danger-fraught home in the ocean to the mouth of the river where they hatched. Then they then must swim miles upstream against an often raging current, escaping bears and other predators along the way, only to face crushing cascades that they then must conquer to reach the place where they will spawn and die. Aren’t you glad you’re not a salmon?