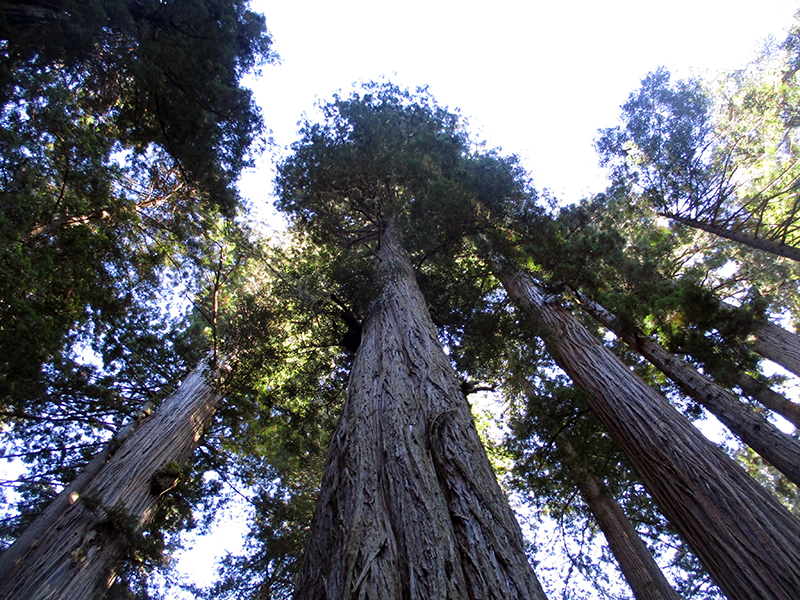 Of course, the coast redwoods — the tallest trees on the planet — are the star attraction here. Lady Bird Johnson, wife of former U.S. Pres. Lyndon Johnson, was awestruck by the majesty of the towering trees and the silence of the forest when she visited here in 1968 to dedicate Redwood National Park. We were awestruck as well. 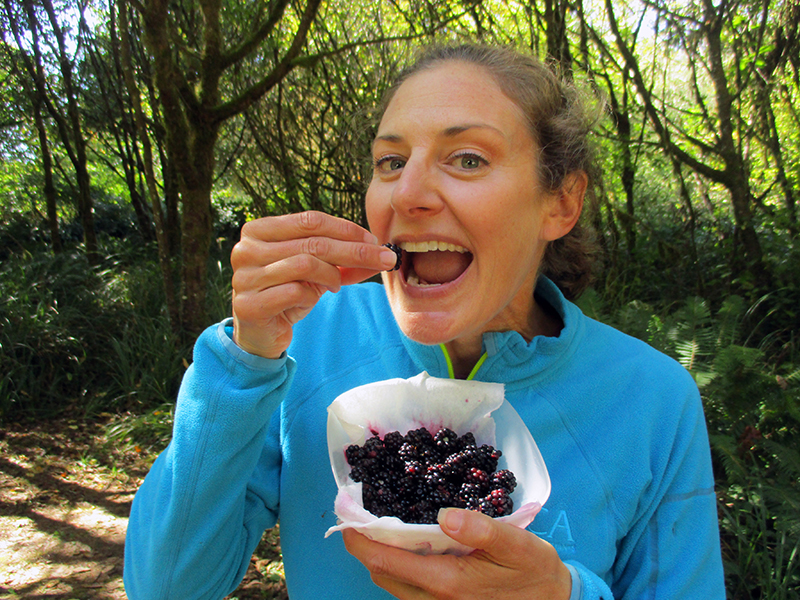 We used the Elk Prairie Campground in Prairie Creek Redwoods State Park as our base. Coming in from the north that early October morning, the road along the coast and through the forest was luminous in the sunlight. We were delighted to find a nearly empty campground upon arrival and chose a spot with a large expanse of sunny forest floor surrounded by blackberry bushes. I’ve said it before and I’ll say it again — one can never have enough berries! 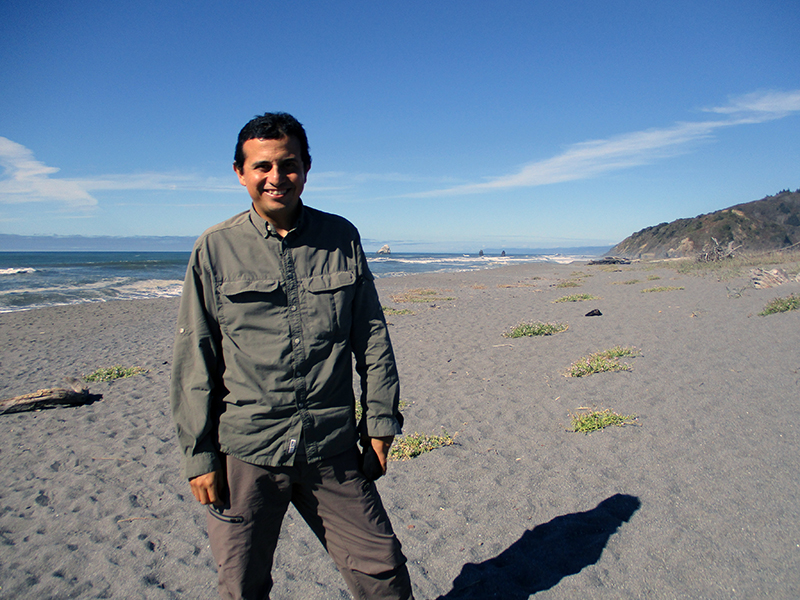 After setting up our tent, we drove south to the Kuchel Visitor Center on the coast to learn more about the park’s history and have a picnic on the beach. Heavy surf thundered to shore, and we could see quite a few seabirds floating on the water and spouting whales off in the distance. But we were eager to get to those marvelous trees. 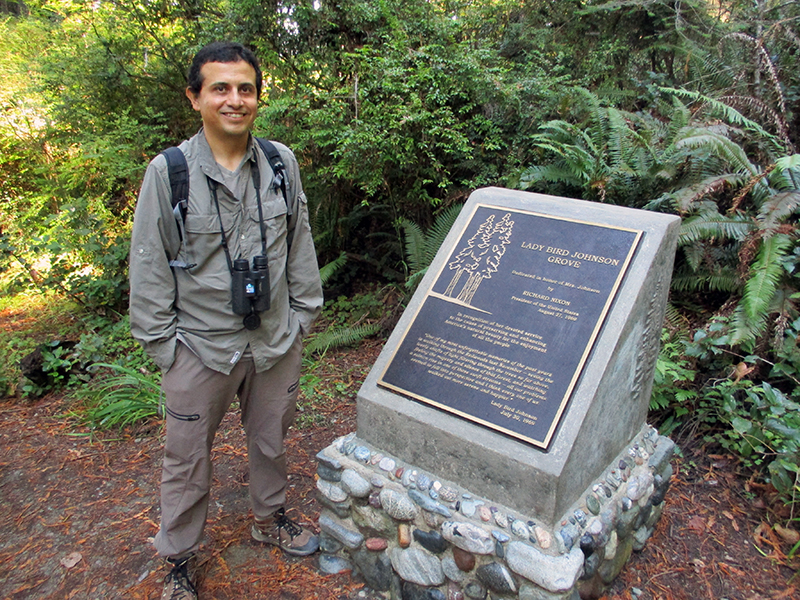 We drove up into the hills to hike the Lady Bird Johnson Grove Trail through old-growth forest of coast redwood as well as hemlock, Douglas-fir, tanoak and rhododendron. At the heart of the trail is a grove dedicated to the former first lady and conservation activist, honored by Richard Nixon for her “devoted service to the cause of preserving and enhancing America’s natural beauty for the enjoyment of all the people.” 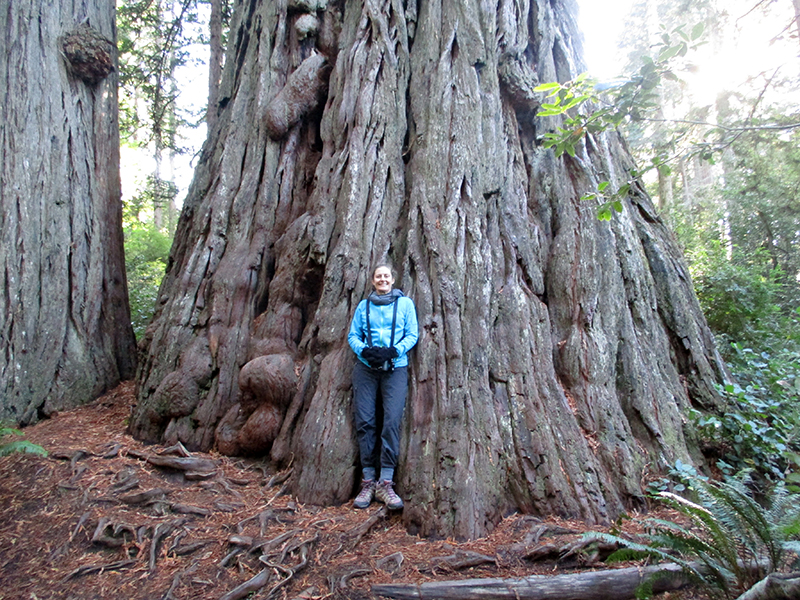 Thank goodness for the national and adjacent state parks protecting the natural beauty here, because only about five percent of the original old-growth redwoods — the vast majority of them in California — still stand today. These giants of the forest reach up to 380 feet in height and are pretty hefty in diameter as well, measuring 22+ feet. 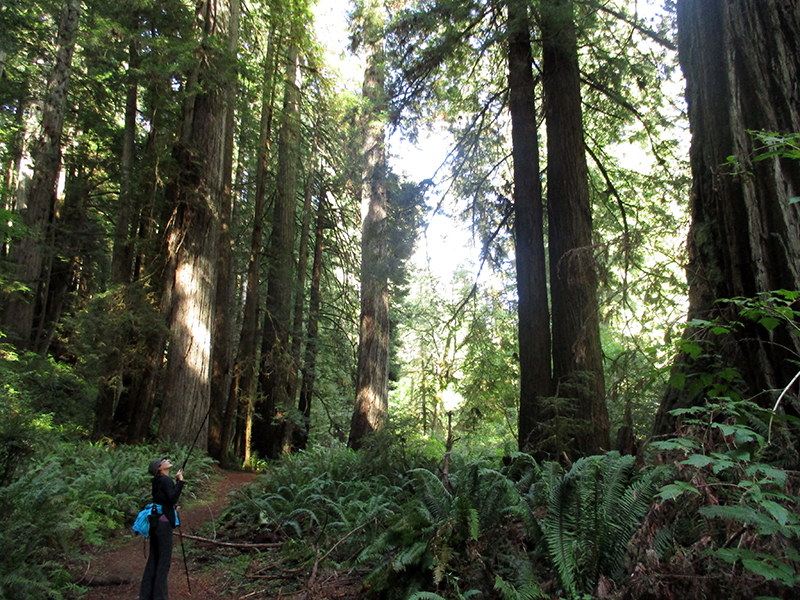 And incredibly, some redwoods have witnessed almost two millennia of human history! When we stopped to think about what these trees have survived in their long lives, our petty, day-to-day worries seemed to shrink in comparison. Walking in the forest here reminded us that we humans are a mere speck of dust on planet Earth, but also that careless attitudes toward nature can quickly wipe out the Earth’s mightiest living beings forever. 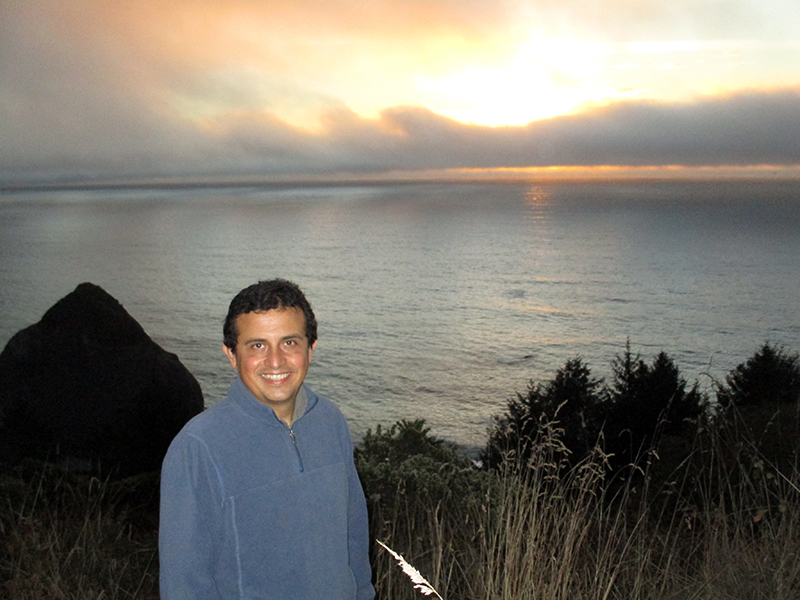 Another mighty living being here is the Roosevelt elk, North America’s largest subspecies of elk. We missed seeing them in Olympic, Mount Rainier and Crater Lake, but on the drive north along the scenic Newton B. Drury Parkway, a herd of three big-antlered males appeared in a prairie clearing with their small harems. Large as they were, they were too far away to get good photos with our point-and-shoot camera. So we continued on to the looping Coastal Drive-Alder Camp-Klamath Beach Road for sunset views of the ocean from the High Bluff Overlook. Sea lions barked below the cliff and an array of seabirds settled in to their evening roost on an ocean-bound rock near the shoreline. 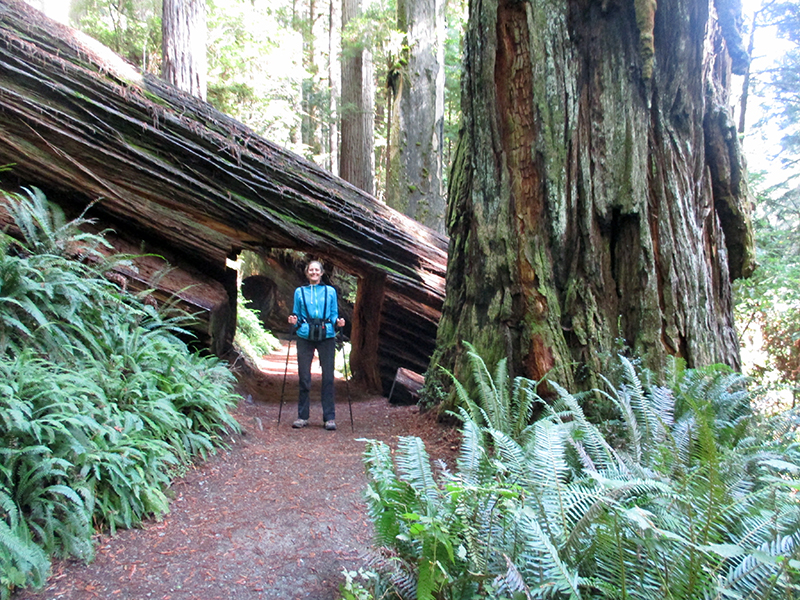 The next day we took the Prairie Creek Trail that led from the campground north along the creek parallel to the Newton B. Drury Parkway. The trail meandered through a cool, moist forest of coast redwoods, Sitka spruce, leaf-dropping maples, moss-covered hemlocks and enormous ferns, with rhododendrons and blackberry and thimbleberry bushes in the sunny patches. 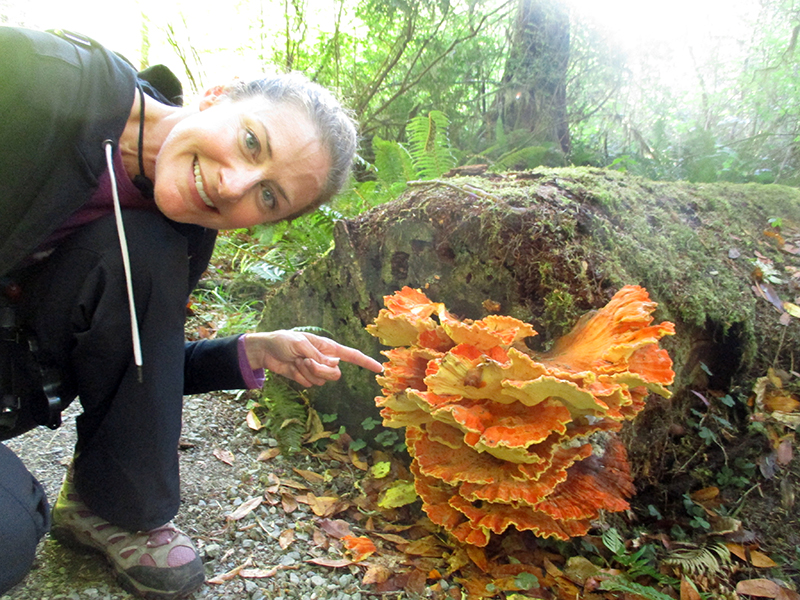 Always fascinated by fungus, I was delighted by the petticoat-like sulfur shelf mushrooms that clung to the stumps of fallen logs along the path. Numerous smaller trails intersected the main trail, making a vast array of loops possible. We crossed the parkway to head uphill along the Rhododendron Trail that undulated more steeply through even denser forest. Here the trees were stunning in their height and girth, but rather than feeling insignificant at the knowledge that we humans are not the grandest living things on the planet, we experienced a sense of serenity. 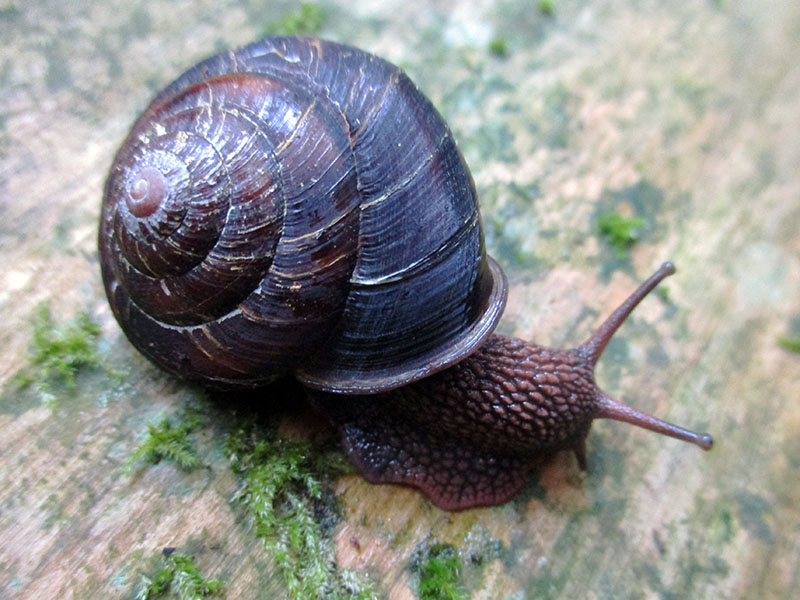 Looping down on the Brown Creek Trail to the Foothill Trail, we passed the lofty Big Tree where visitors lined up to have their photos taken next to the behemoth. This aptly named specimen is more than 60 feet in circumference, more than 300 feet tall, and more than 1,500 years old. But, like the sulfur shelf mushrooms, sometimes what you find closer to the ground is just as interesting. An assortment of slugs and snails inched their way across the path, and tiny Pacific wrens chattered noisily as they hopped mouse-like among the understory vegetation. 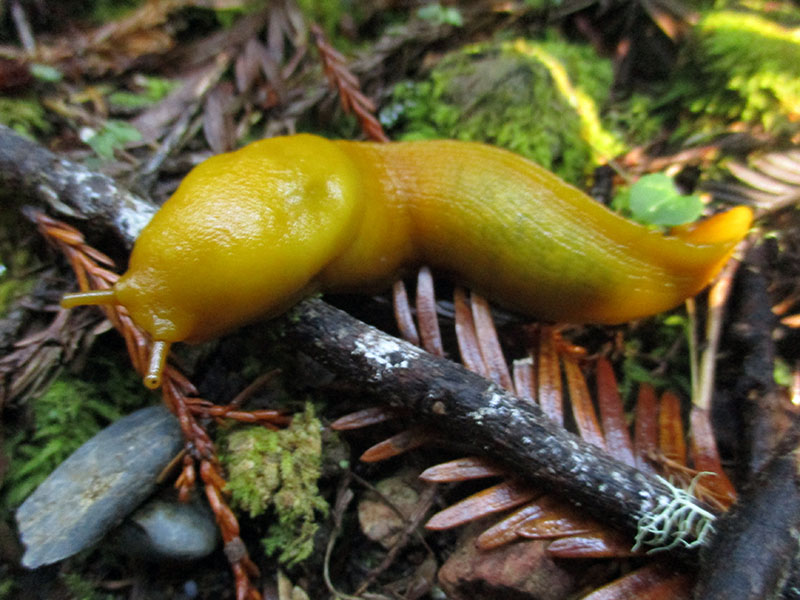 Back at camp that evening, we reflected on the long day’s hike and our brief time in the park. From the shafts of sunlight filtering through the majestic trees to the lowliest banana slug at our feet, our lasting sentiment about Redwood National Park is one of gratitude that such a majestic example of America’s natural beauty is preserved for all people to enjoy.