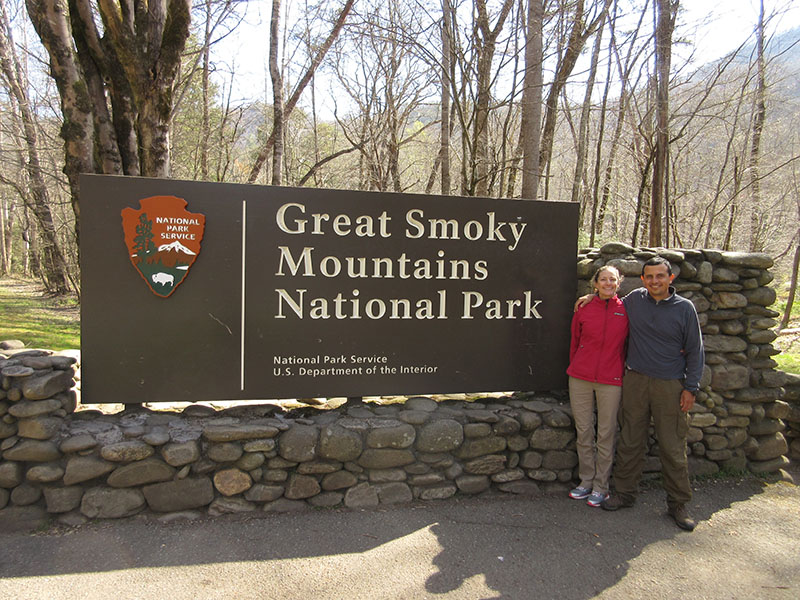 We drove into Great Smoky Mountains National Park from the North Carolina side via the cute mountain town of Maggie Valley. Our first item on the agenda: snagging a Smokemont Campground site just across from the Oconaluftee River’s Bradley Fork. 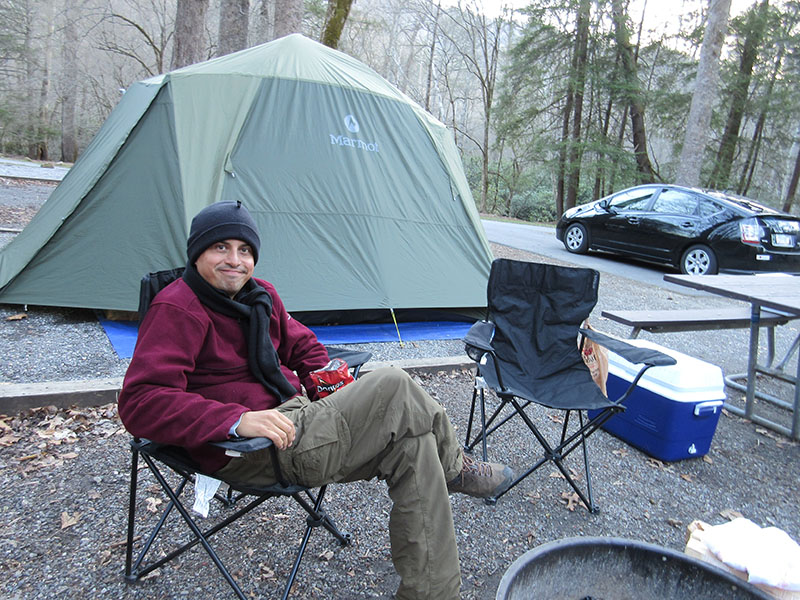 We set up camp and drove back to the Oconaluftee Visitor Center to get our parks passport stamp, buy our official park pin and learn more about what to explore here. One display detailed the Trail of Tears event that forced 16,000 Cherokees from their land. Despite this tragedy, members of the Eastern Band of the Cherokee Indians — descendants of those who were able to avoid or return from the Trail of Tears — live in and around the aptly named town of Cherokee just south of the park today.

The exhibits also explained the different habitat types, plants and animals found in the park, with salamanders represented in unusually large numbers (30 species in residence). In fact, the Great Smoky Mountains are known as the “salamander capital of the world.” 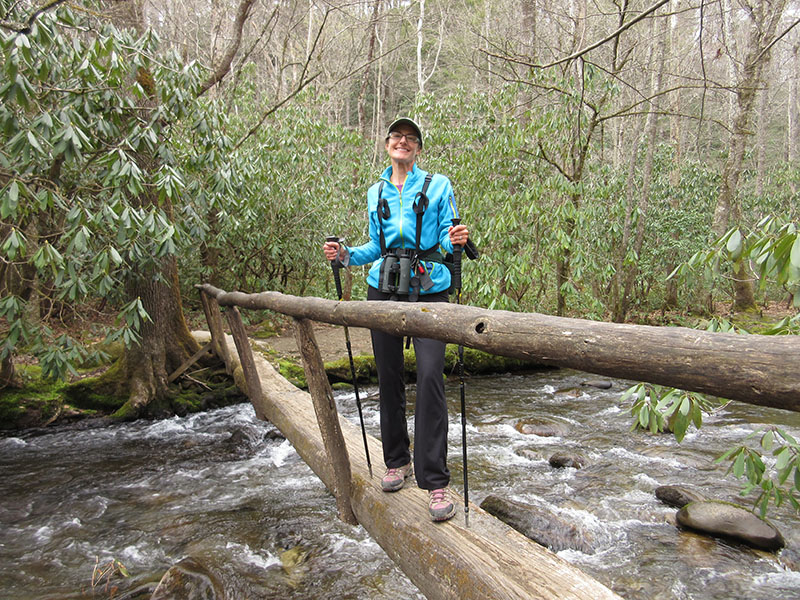 Another section of the exhibit depicted how Civilian Conservation Corps crews built roads, bridges, trails, park buildings and other infrastructure here during the Great Depression. The CCC put three million young men to work constructing facilities for a park system that nearly 300 million annual visitors enjoy today. As we’ve traveled to these places and enjoyed the fruits of those workers’ labors so many years ago, we’re struck by one notion in particular. Teddy Roosevelt’s creation of the National Park Service in 1916 and Franklin Roosevelt’s creation of the CCC in 1933 (notwithstanding the lamentable racial segregation of CCC crews) were two of our country’s best ideas in the last century for bolstering prosperity and environmental stewardship. Now would be a great time for a similar public investment in people and the planet. (Just our two cents.)

We then toured the Mountain Farm Museum next to the Oconaluftee Visitor Center. This collection of relocated historic buildings shows how mountain farming people lived in the 1800s and early 1900s. Many people sold their land and moved — some willingly and others not so willingly — to make way for the establishment of Great Smoky Mountains National Park in 1934. These hardy people existed mostly on corn, apples and hogs as their primary staples, along with sorghum, fish, game and plants foraged from the wild. 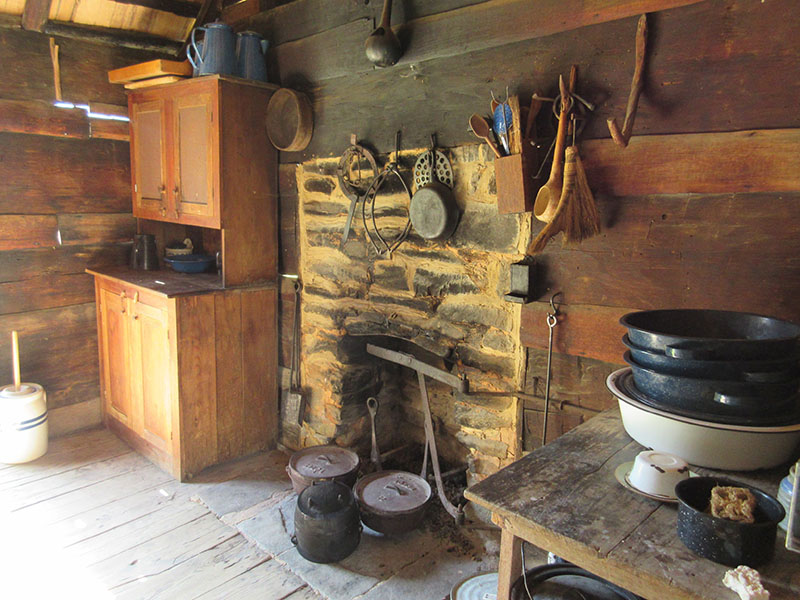 At first glance it seems mountain farming people led very simple lives, but in reality they had complicated existences, spending long hours to make most of what they had. Here’s an example. Instead of buying a bar of soap, they had to:

What a production! Most of us live much simpler lives today, getting what we need from the store and saving our bodies the wear and tear of physical labor to make everything from scratch. What’s also admirable about these mountain people is that they largely got by without slaves. However, that’s more because they were too poor to afford slaves than because they had a moral opposition to the practice. 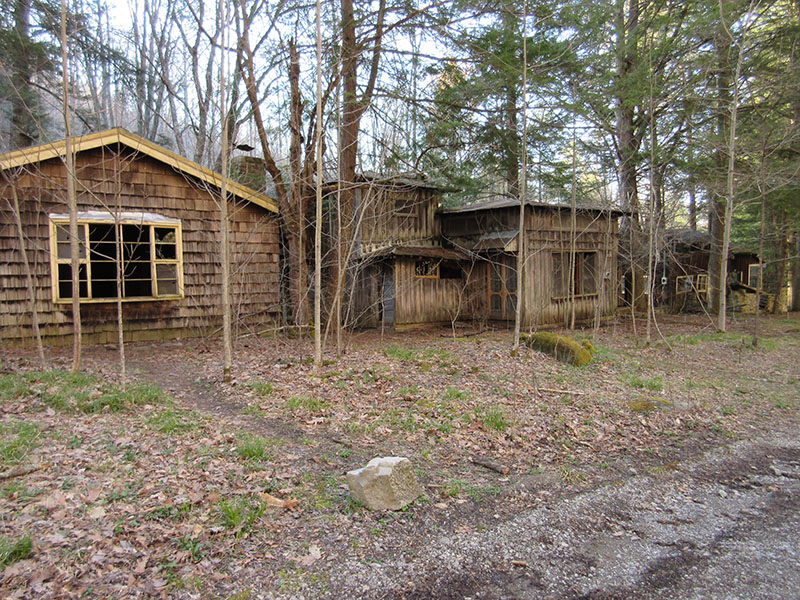 We also visited the historic Elkmont area on the Tennessee side as part of a hike one day and saw the remnants of former inhabitants at the other end of the economic spectrum. The Jakes Creek and Little River trails start out following an old road dotted with abandoned and dilapidated cabins, the relics of summer retreats for Knoxville’s elite who belonged to the Appalachian Club in the early 1900s. 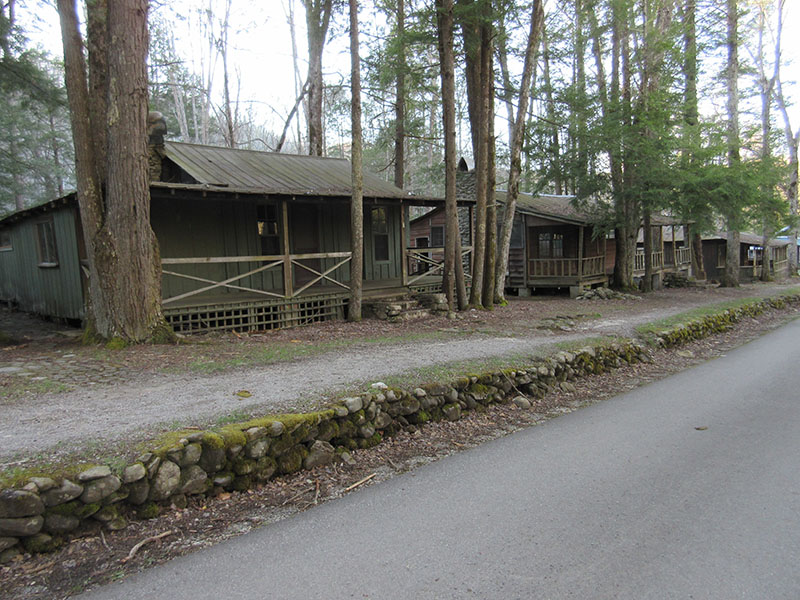 Unlike the mountain people who were bought out and had to get out, the wealthy homeowners here bargained for lifetime leases — the last of which ended in 2001 — so they could remain on the property. In addition to “Millionaire’s Row,” one stretch of road near the Appalachian Clubhouse was known as Daisy Town with a mix of smaller cottages and cabins. We found this historical part of the park almost more fascinating than our hike. I love using my imagination to think about what life must have been like for the families who came to this vacation community in its heyday.

One other section of the park — the Cades Cove area — contains more historic homesites that offer a journey back in time, which we’ll have to save for a future trip. And when it comes to Great Smoky Mountains National Park, we will be back!

Meanwhile, read more about our hiking excursions in the Smokies.

5 thoughts on “Life is Great in the Smokies”