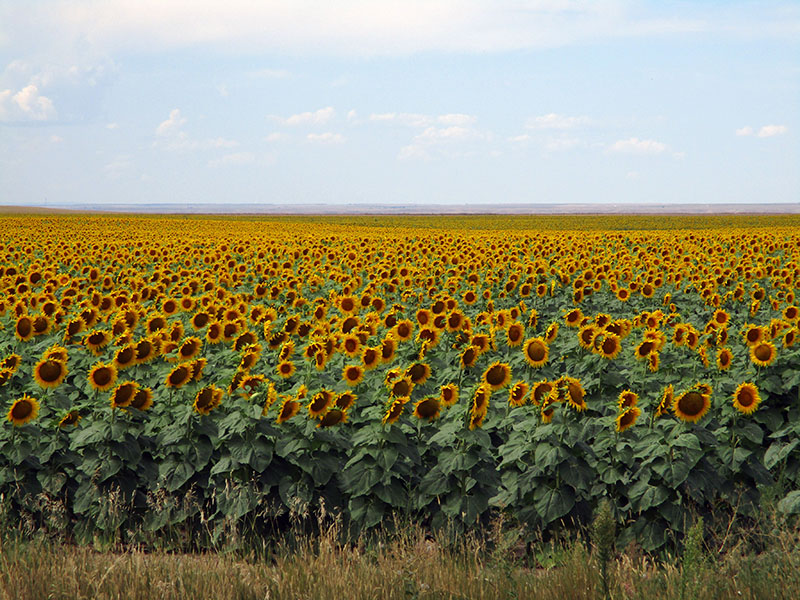 Driving west through southern South Dakota on our way to Badlands National Park, we passed field after field of bright yellow sunflowers that seemed to go on for miles. It’s a stunning sight, but more stunning scenery awaited us as we arrived at the park. 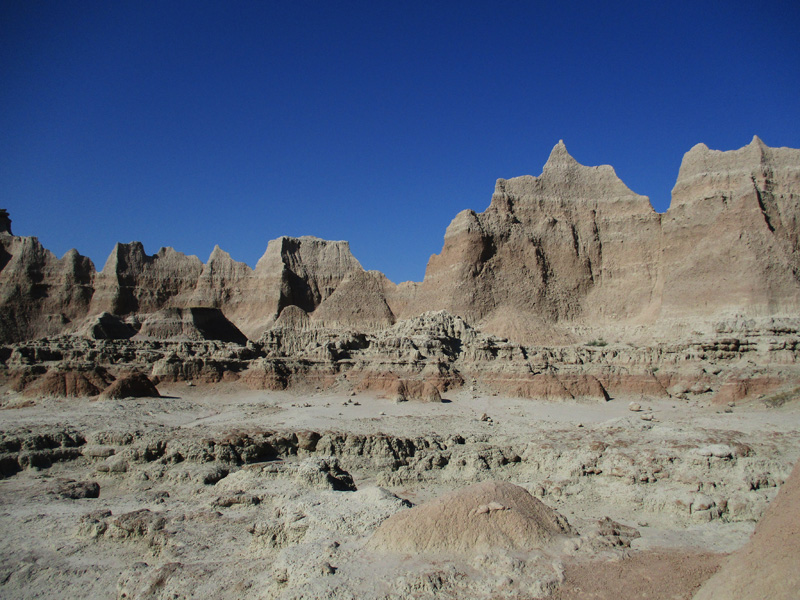 The simultaneously jagged and crumbly rock formations immediately wowed us as we drove in. As dry as it is, the landscape is shaped almost entirely by water. Water sculpted these rock formations through the forces of erosion, and water is slowly making the rock disappear. Only when grass or other vegetation takes hold do some patches manage to keep their soil in place long enough to stabilize and form buttes. The rest of the rock forms into knife-sharp ridges and spires that make this land appear so foreboding. 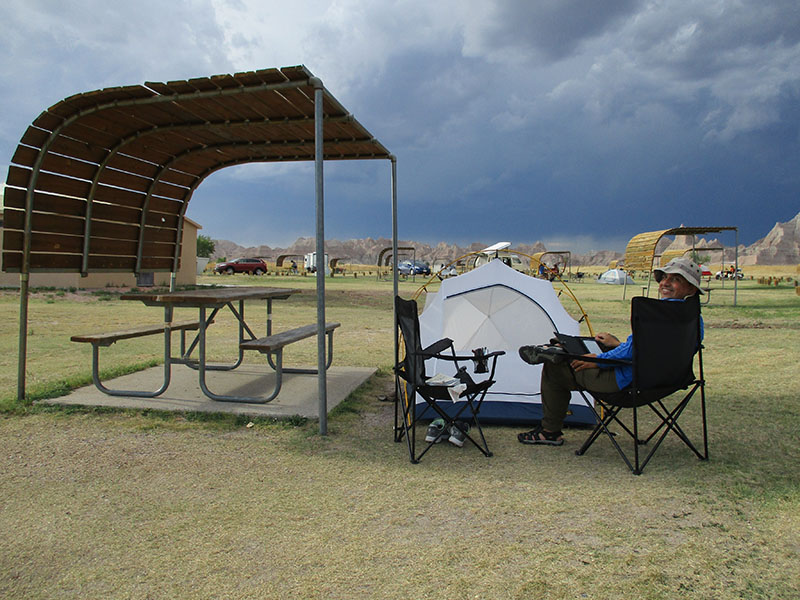 Despite the lack of trees in the campground, each campsite had a shade structure optimally placed to block the hottest of the afternoon sun. We found the warm, dry August air rather welcome, especially once clouds rolled in and a stiff breeze picked up. In the face of such a breeze, we opted to put up our small, low-slung tent instead of the big one. A young family set up camp next to us, laboring mightily to stake everything down as their out-sized tent flapped madly in the wind. (Little did they know that a few hours later they’d struggle to take their beast of a tent down when a major storm hit, with winds gusting up to 70 mph and rain that lasted much of the night.) 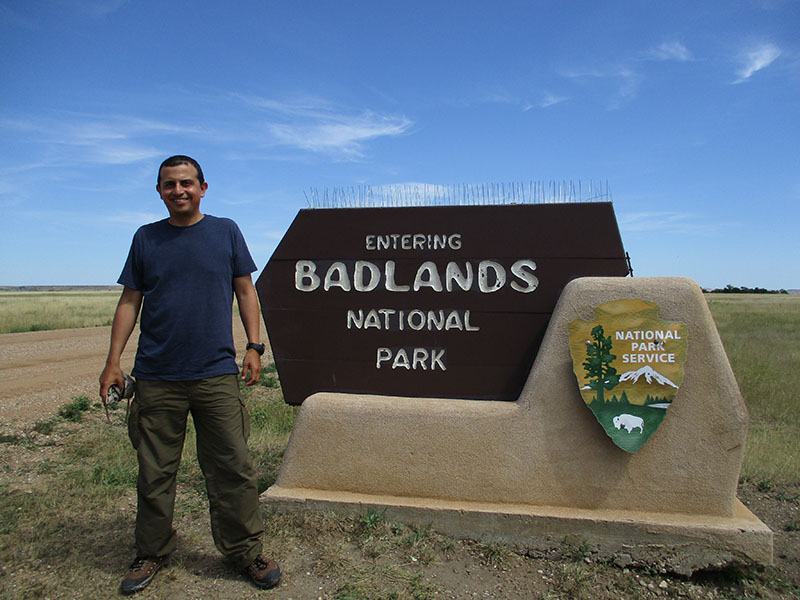 We attended several evening ranger talks in the campground amphitheater, one of which was on the fossils that abound here in the Badlands. Because the land erodes so quickly, visitors out hiking around often find fossils that had lain hidden only the day before. One lucky seven-year-old girl discovered a saber tooth cat fossil in 2010!

After the heavy night’s rain, I awoke just before sunrise with the air cool and moist. As I stood outside in the predawn light watching bats circling above me and listening to the nasal calls of the nighthawks, a rabbit hopped toward me and stopped a few feet away. Out of the corner of my eye in the other direction, I noticed another creature approaching. This time it was a badger — an animal I had never before seen in the wild but had been wanting to see all year. Last night’s rain meant a promising day for wildlife. 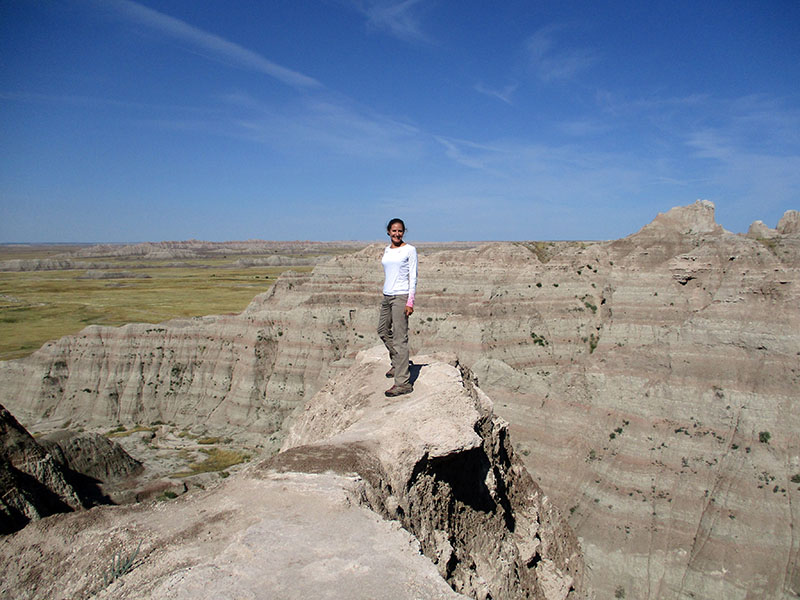 We spent the day driving the Badlands Loop Road. Rounded and sharply pointed rock hills with pale bands of white, tan, grey, pink and yellow punctuate vast, flat expanses of grasslands. Dozens of viewpoints offer visitors a chance to get out of the car for short strolls and long hikes. There are numerous trails, but unlike most other national parks, here you can walk anywhere, clambering up and over any of the rock formations you wish. The fossil soils and crumbling rock erode about an inch a year from wind and rain, so human impact on the land pales compared to Mother Nature’s effect. 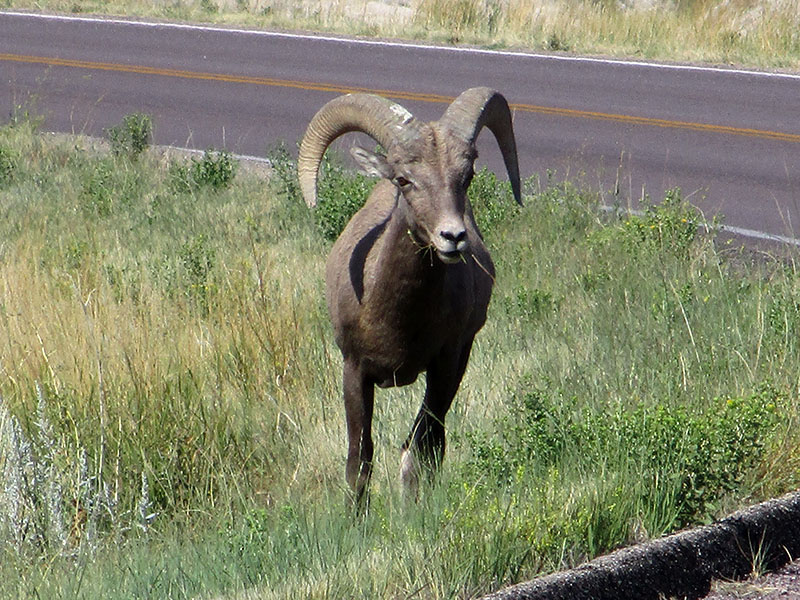 The striking landscape is reason enough to visit, but wildlife — more readily seen here on the largely treeless prairie — provide a nice bonus. We saw bighorn sheep, pronghorn, coyotes, and more prairie dogs than we could count. 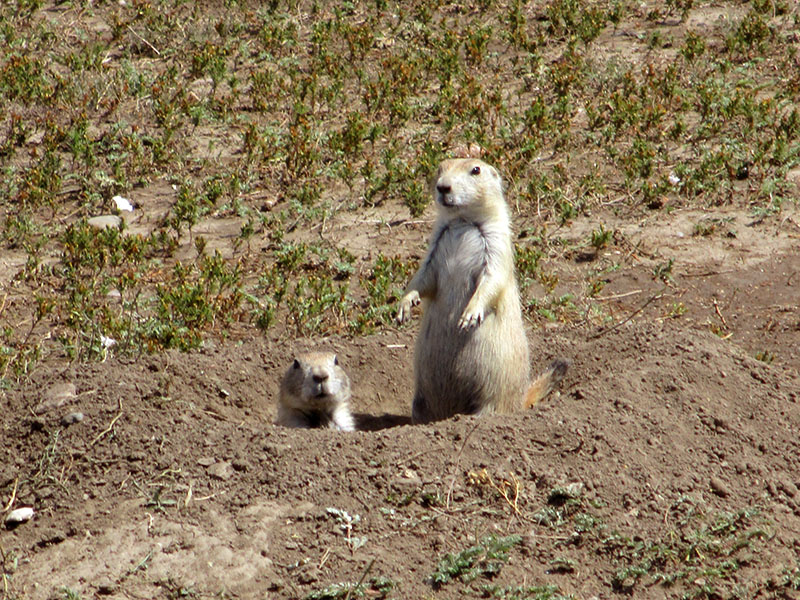 We spent a good deal of time observing the prairie dog towns at the roadside. Prairie dogs are compelling to watch as they run, jump, chase and nuzzle each other, and stand guard atop the mounds they build at the entrances to their underground burrows. Occasionally they leap up, stretch their front paws in the air and give a little squeak, almost as if they’re shouting, “Hooray!” and others will follow suit. Scientists who study prairie dogs have identified this as the “jump-yip” move. It’s not celebratory but rather a contagious behavior that any prairie dogs watching will imitate — similar to yawning in humans. The jump-yip allows one prairie dog to see how many other dogs are paying attention before he ventures out into potentially unsafe territory at the edge of the colony. 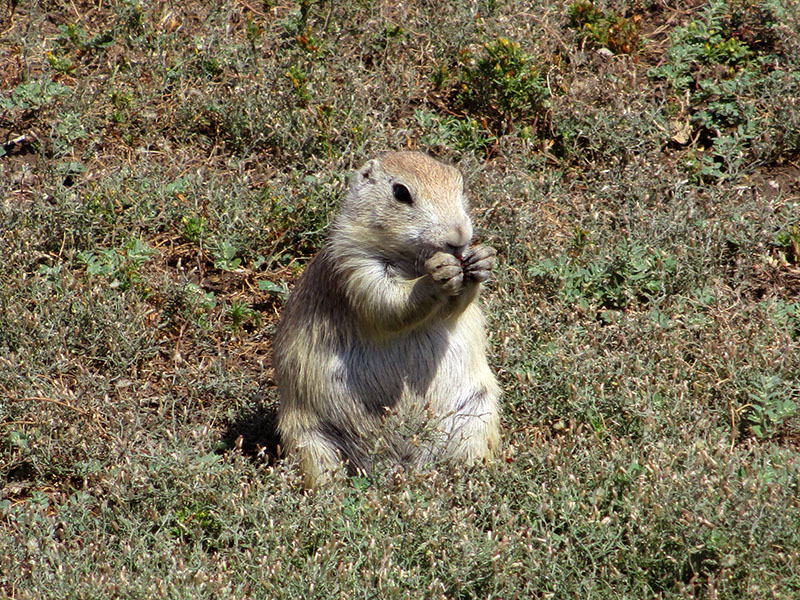 We learned more about prairie dogs at the Buffalo Gap National Grasslands Visitor Center outside the park. A ranger told us about the threats these diminutive creatures face. In the past, they have suffered from predation, habitat loss, and shooting and poisoning by ranchers who don’t realize just how beneficial prairie dogs are to the landscape and what a key role they play in the food web. Now, plague threatens their populations here in South Dakota and elsewhere. When fleas carrying the disease arrive, plague can wipe out entire colonies. Buffalo Gap management staff are testing a vaccine administered via peanut butter-flavored treats, but this costs money (and of course there is never enough federal money to go around these days). 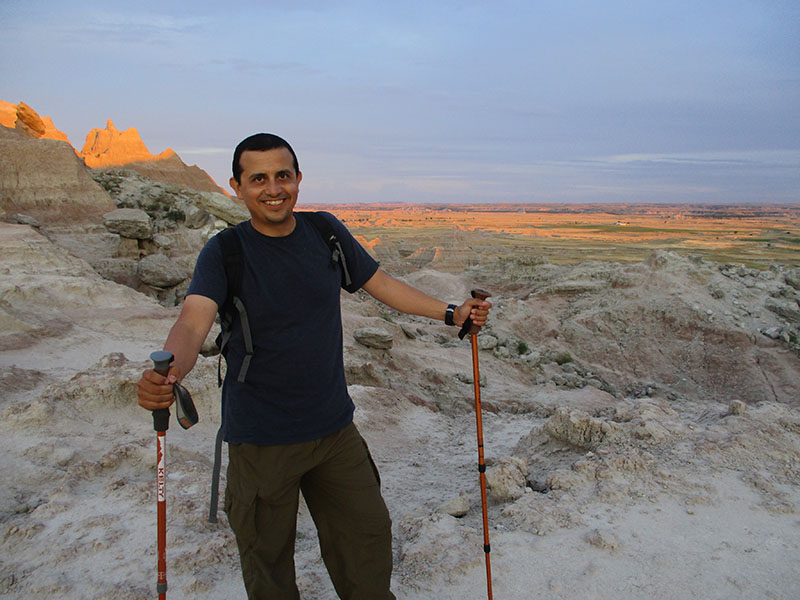 Toward the end of the day we hiked up the short, steep and at times difficult-to-follow Saddle Pass Trail. It led up to the expansive plateau of the upper prairie, and from there we headed west along the Castle Trail over to the Fossil Exhibit area. Doubling back, we arrived at the trail junction overlooking the lower prairie just in time for sunset. As we looked down at the grasslands and our campground below, we found it a particularly good place for reflection.

The next day we hiked the other end of the Castle Trail and looped back along the Medicine Root Trail. The path led through mini-canyons, exposed white clay and unshaded grassland. 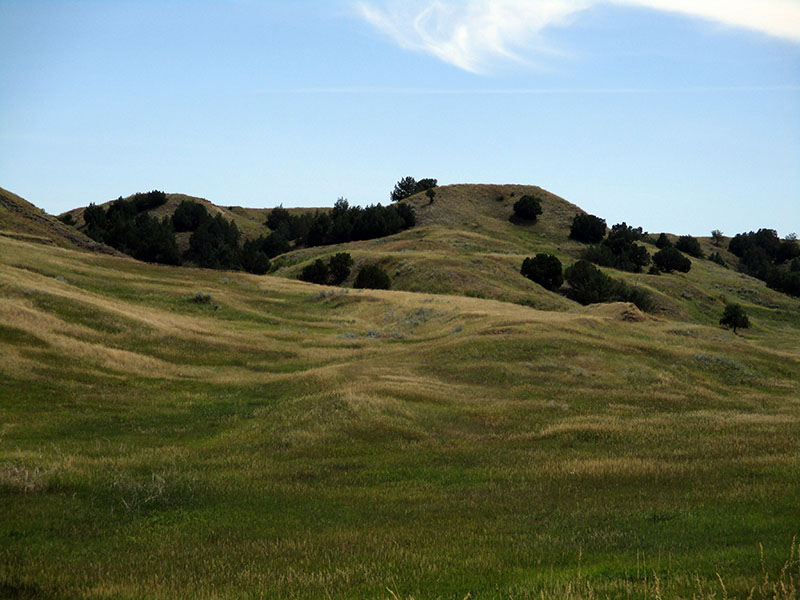 By late morning, it was too warm for comfort and we spent the afternoon driving along the gravel Sage Creek Rim Road to see the even larger Roberts Prairie Dog Town and bison grazing in the grasslands below. (More than 1,000 of these shaggy beasts call this part of the park home.) Toward the far western edge of the Badlands Wilderness Area, the rocky landscape gave way to more gently rolling, grass-covered terrain dotted with trees when drainage areas have enough water to support larger vegetation. This side of the park had a different feeling altogether; one not many Badlands visitors bother to see. I’m glad we took the time to explore it. 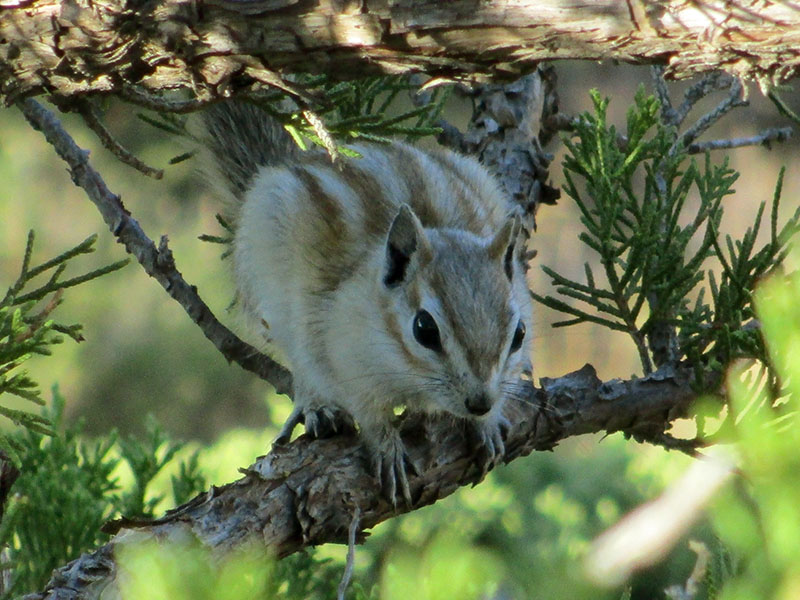 On our final morning in the park, we went on several short yet hikes in the Cedar Pass area, including The Notch, The Window, The Door, and the Cliff Shelf Nature Trail. The Cliff Shelf provided especially marvelous views of the lower prairie below and abounded with deer, rabbits and chipmunks. Despite the seemingly inhospitable nature of the landscape, we found the Badlands to be chock full of good stuff.

5 thoughts on “Good Stuff in the Badlands”