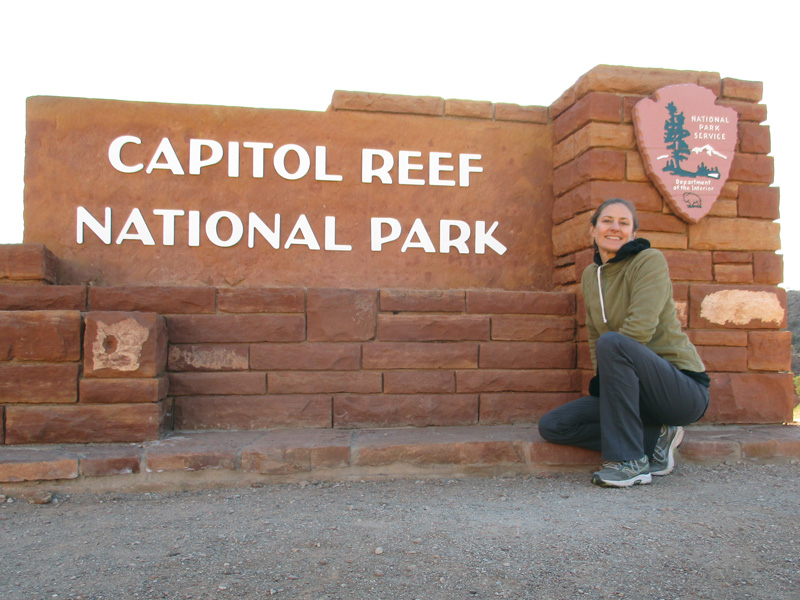 Exploring Capitol Reef National Park in Utah is like an Easter egg hunt. While it shares the land’s ruddy complexion and arid conditions found in other, more famous national parks in Utah — like Bryce, Zion and Arches — it’s not packed quite as full of dramatic scenery. But if you keep your eyes open, you’ll discover little surprises tucked here and there throughout the landscape and want to collect as many memories from this park as you can fit into your basket.

The late-afternoon sun made the varying shades of red come alive on the towering, west-facing cliffs of limestone, sandstone and shale as we arrived in early November. Worried that we wouldn’t find space in the first-come, first-served campground, we booked a room outside the park at the Capitol Reef Resort. With nicely appointed rooms, a view of the red rock cliffs outside our window and reasonable off-season rates, we found it a good alternative to freezing in a tent overnight.

The next day dawned sunny and bright, so we squeezed in multiple hikes. We started with the Rim Overlook Trail, which took us 2.3 miles up the Waterpocket Fold, North America’s largest exposed monocline — a fold or wrinkle in the Earth’s crust — that stretches for nearly 100 miles. The “reef” part of the park’s name comes from this fold, which resembles an impassable barrier reef left over from an ancient ocean. Although at one time an ocean did cover the land here, it was not a reef but the forces of deposition, tectonic uplift and erosion over the course of hundreds of millions of years that created the massive monocline. 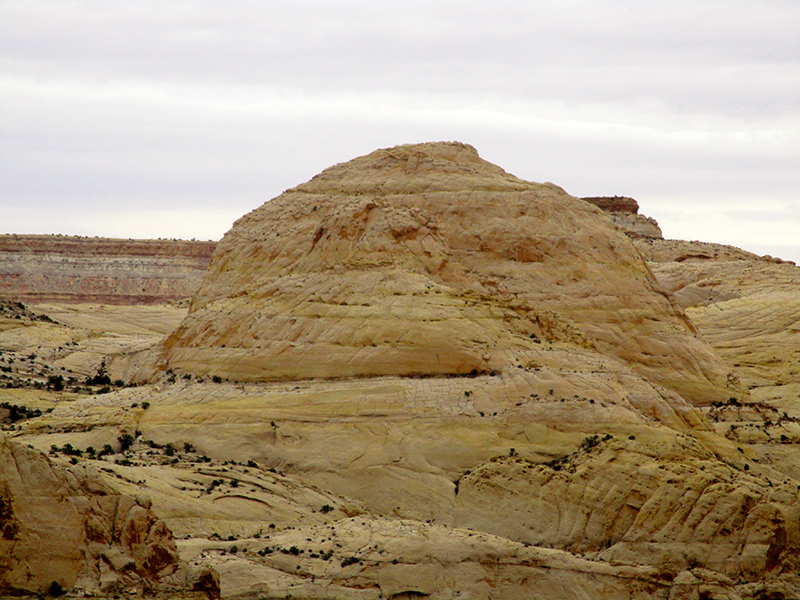 The other part of the park’s name comes from a prominent white Navajo sandstone formation among the Waterpoket Fold that reminded early travelers of the U.S. Capitol Building.

From the rim of the Waterpocket Fold, we had inspiring views of the valley below, including the remnants of the Mormon pioneer settlement of Fruita dating back to the 1880s. The Park Service maintains several historic buildings from the village as well as some 3,000 fruit and nut trees in the orchards planted by the settlers.

Sadly, we arrived about two weeks late to participate in the harvest. In season, however, visitors may eat all the apples, peaches, pears, apricots, cherries, plums, almonds and walnuts they’d like at no charge in the orchards, or pay a small fee to take fruit home.­­­­­­

Next we hiked the one-mile Fremont River Trail down below in the Fruita Historic District. The path began with the shallow but fast-moving Fremont River on one side and the campground and several orchards on the other side. We soon climbed high above the river to a plateau with a panoramic view of Fruita and the undulating bands of rock in the gray Chinle and red Moenkopi formations at the base of the Waterpocket Fold’s sandstone cliffs.

To end the day, we drove to the southern terminus of the park’s 10-mile paved Scenic Drive, and another 2.5 miles on the gravel Capitol Gorge Road, to get to our third hiking trail. The drive alone was enjoyable, with innumerable twists and turns as the road wound through a deep canyon. At the end of that road we set off on the Capitol Gorge Trail on foot.

The path led past a few faded petroglyphs on the gorge walls dating back to 600 A.D., then more recent inscriptions high on the rock face — the “Pioneer Register” — of people who came through the gorge in the late 1800s and early 1900s. Until Highway 24 was built along the Fremont River in the 1960s, this narrow canyon was the only transit route through the Waterpocket Fold.

We trudged along the sandy wash for a mile and turned off at the signpost for The Tanks. That short spur trail scrambled uphill to a series of water-filled potholes in the rocks, and we had fun picking our way among the slickrock to see what lay above. On the way back we noticed many shallow holes that gave the canyon walls a Swiss cheese appearance. Known as “solution pockets,” these pits form when water erodes away rocks and weaker agglomerations of sediments from the cliffs.

On our final morning in the park we hiked into Cohab Canyon, which once served as a hideout for polygamists (a.k.a. cohabitators) escaping the law after Utah banned plural marriage in 1890. Walking through the canyon wash, it was easy to see how the many nooks, crannies and side ravines offered hiding spots for those not wanting to be found. As in Capitol Gorge, eroded solution pockets created whimsical shapes in the cliff walls.

The wash opened up to a plateau with several overlooks that had magnificent views of Fruita, the orchards, the Capitol Dome and the rim across the Fremont River valley. Pleasant as this hike was, we didn’t linger because we saw dark clouds beginning to form off in the distance. Storms can roll in quickly on the Colorado Plateau, and flash floods can turn narrow canyons, gorges and dry washes into deathtraps. 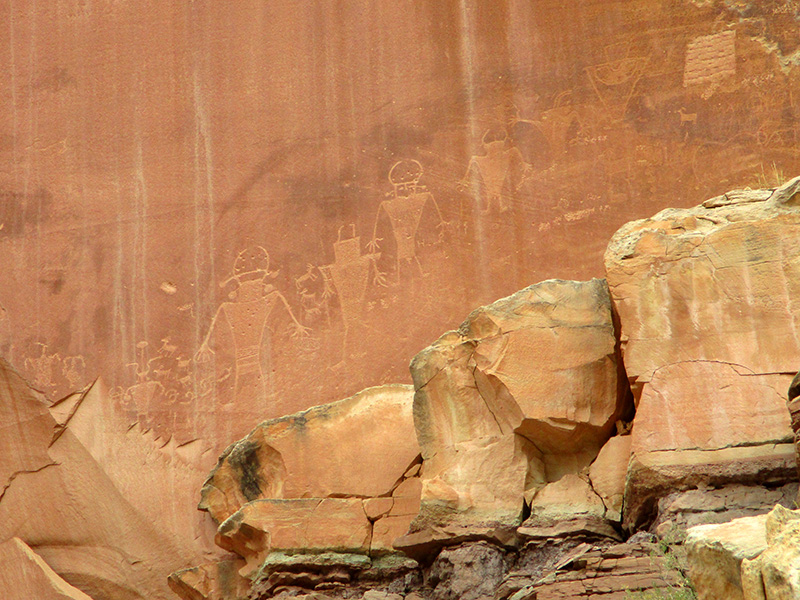 After returning to the trailhead, we made one more stop before leaving the park: the petroglyph pullout along Highway 24 just east of the Visitor Center, where a boardwalk runs beneath several of Capitol Reef’s best examples of rock art. Fremont Culture peoples who inhabited the area from about 600 to 1300 A.D. etched figures of humans, animals and other symbols into the wall of Wingate sandstone, leaving archaeologists to ponder the meaning of this enduring art. Sci-fi buffs could easily imagine that the petroglyphs record ancient visitations by aliens from outer space!

Between the meandering canyons, water pockets, petroglyphs and other surprises that await the observant visitor, Capitol Reef is filled with enough little goodies to make it enjoyable and worthwhile. We’re marking our calendar to return here during harvest season when we can fill our baskets with fruit, too.