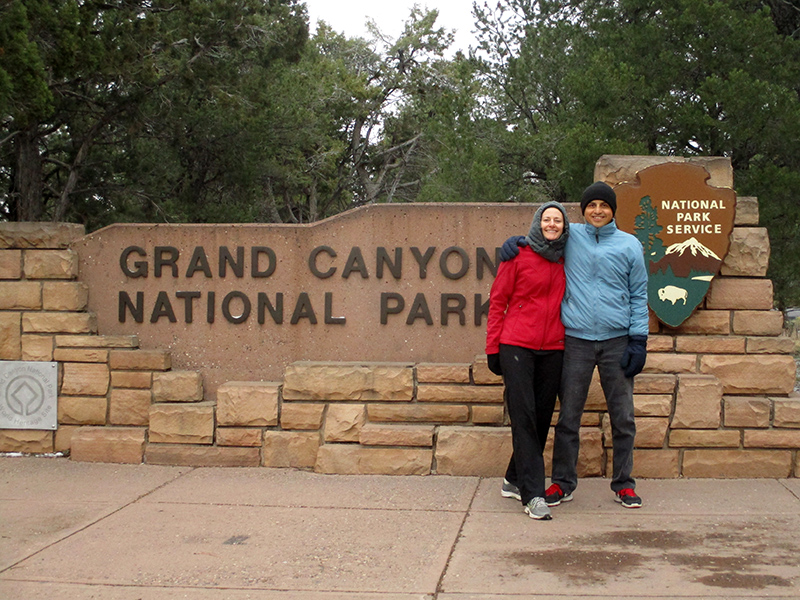 For the fifth year in a row in our post-Thanksgiving tradition, Hector and I hiked from Grand Canyon National Park’s South Rim to the Colorado River and back up — in one day. Why would we do such a thing? Because the so-called “Rim to River” hike is an exhilarating, awe-inspiring, gratifying challenge that is simply… grand. 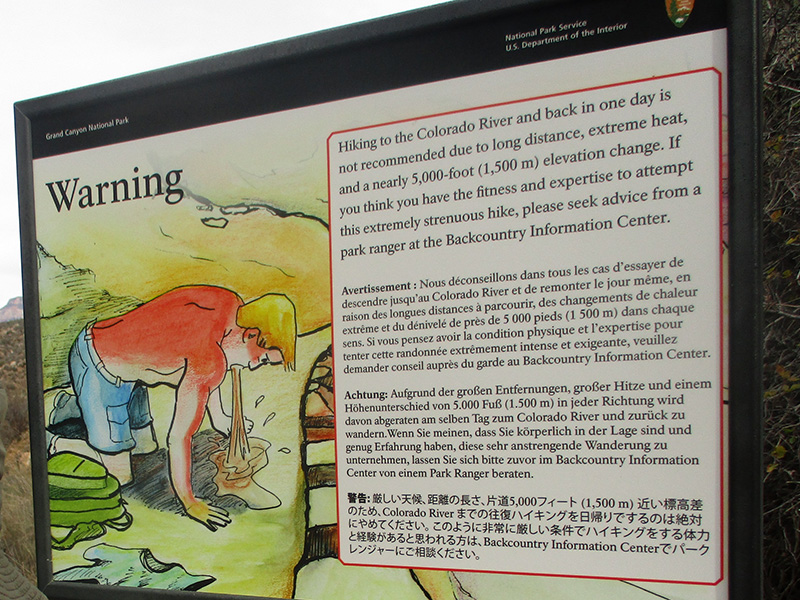 Grand as it is, graphic signs everywhere warn against going all the way to the river and back the same day, and rangers will tell you that under no circumstances should you attempt this hike, regardless of your fitness level, between May and October. Their job, of course, is to keep visitors safe. Indeed, the Park Service rescues some 250 people from the Grand Canyon each year, and about a dozen people die in the Grand Canyon annually. 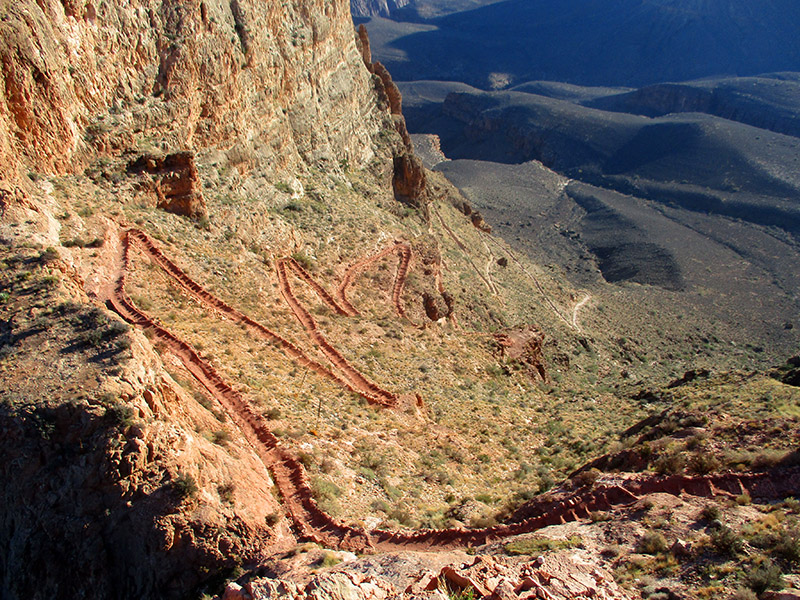 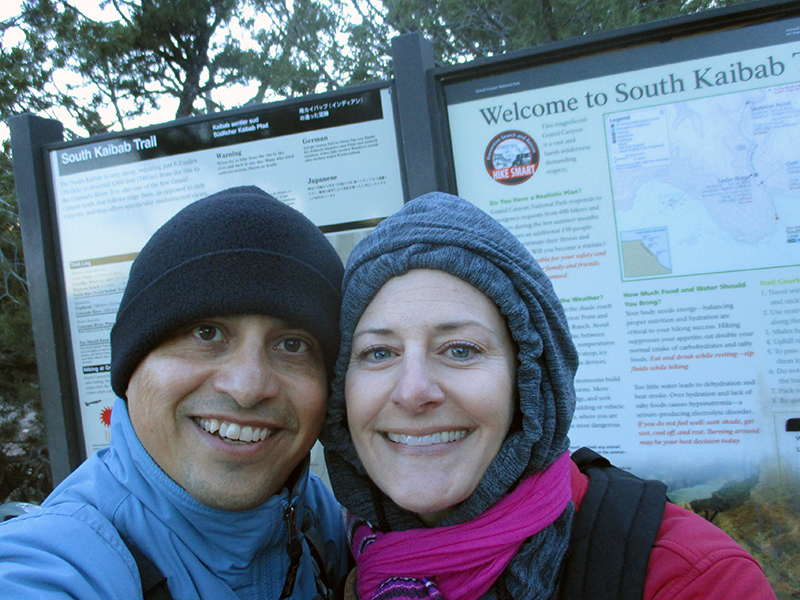 We bundled up in layers and took the free 7 a.m. Hiker Express shuttle from Grand Canyon Village to the start of the South Kaibab Trail near Yaki Point. This steep trail drops more than 4,700 feet in 6.7 miles and passes through 12 geologic layers, from the Kaibab Formation (the youngest at 270 million years ago) at the top to the Vishnu Basement Rocks (the oldest at 1,840 million years ago) at the bottom of the canyon. The vegetation changes dramatically as well, from pinyon-juniper forest at the rim to the cactus-clad desert floor down below. 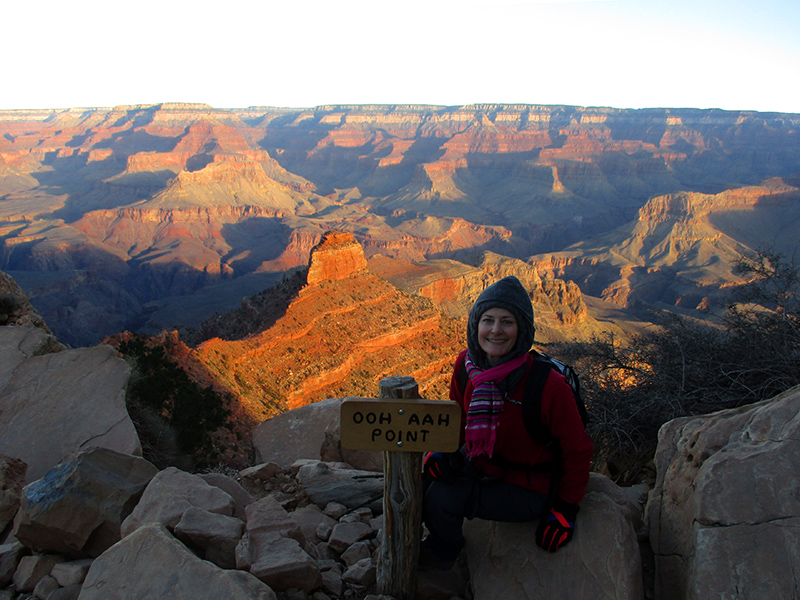 We rested briefly at stops such as Ooh Aah Point, Cedar Point and Skeleton Point — all good places to have a snack, stretch and drink in the thrilling views that unfold before your eyes. 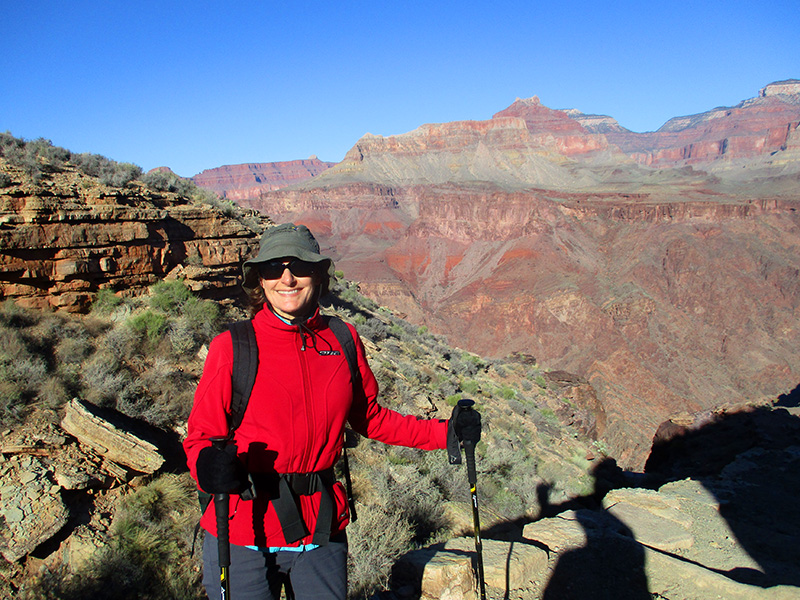 At the junction with the Tonto Trail — which runs for 70 miles mostly along the Tonto Platform  roughly halfway between the inner gorge and the upper canyon — we rested again before heading over the Tipoff at 4.6 miles. At that point, the vast majority of day hikers who haven’t already done so turn around. Most people continuing on have an overnight stay at Phantom Ranch or the Bright Angel Campground at the bottom of the canyon. Both of those options require hard-to-obtain advance reservations. 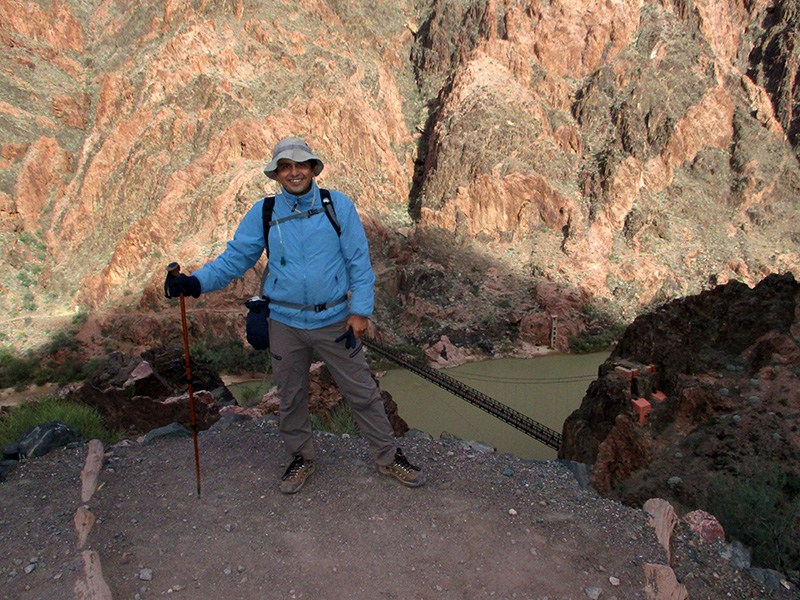 Soon enough the Colorado River came into view. A few miles more and we hit the River Trail, which follows a ridge above the river and connects to the Bright Angel Trail. But first, we crossed the Silver Bridge to the north shore of the Colorado River for an early lunch stop. Thanks to warm weather and ice-free trail conditions near the rim (a rarity in late November) this year, we made particularly good time. 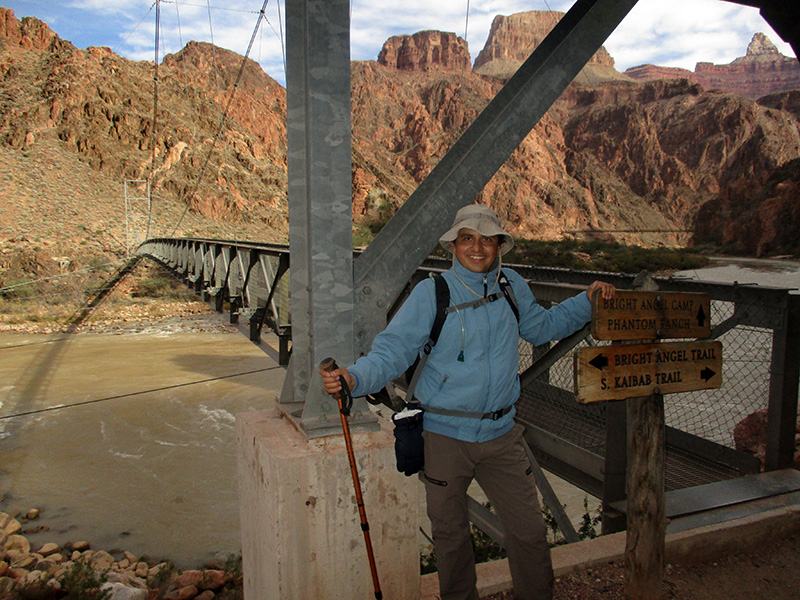 We then crossed back over the river and continued on the south side to Bright Angel Canyon. The longer ascent via Bright Angel makes for a 16.7-mile day, compared to 13 or so miles when returning via South Kaibab, which is what we did our first year. But we like the longer hike for three reasons: 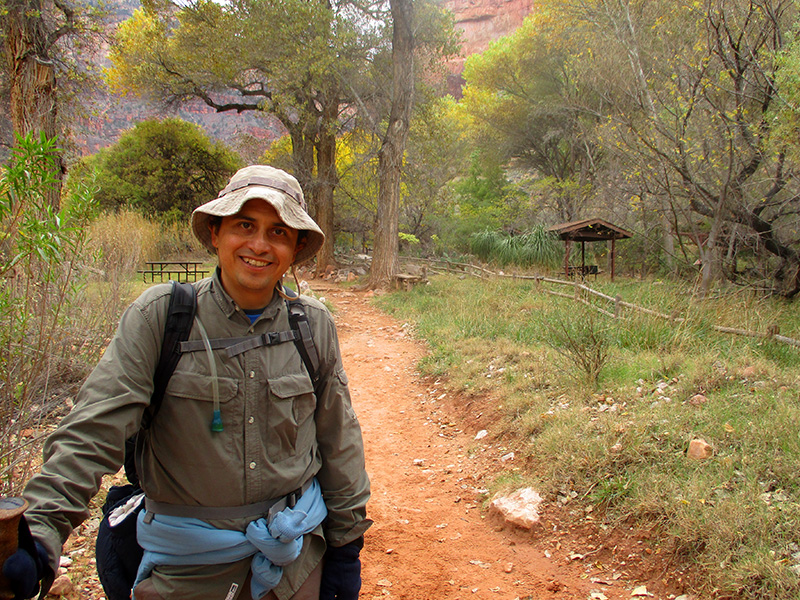 We maintained our brisk pace as we joined the Bright Angel Trail and followed Garden Creek up to Indian Garden, which is a destination itself. As the name implies, it’s an idyllic place with grass, wild grapevines and cottonwood trees showing off their golden fall colors. Drinking water faucets there allow you to refill your water bottles (as long as the pipes aren’t frozen or broken, or the water hasn’t been turned off for the season). 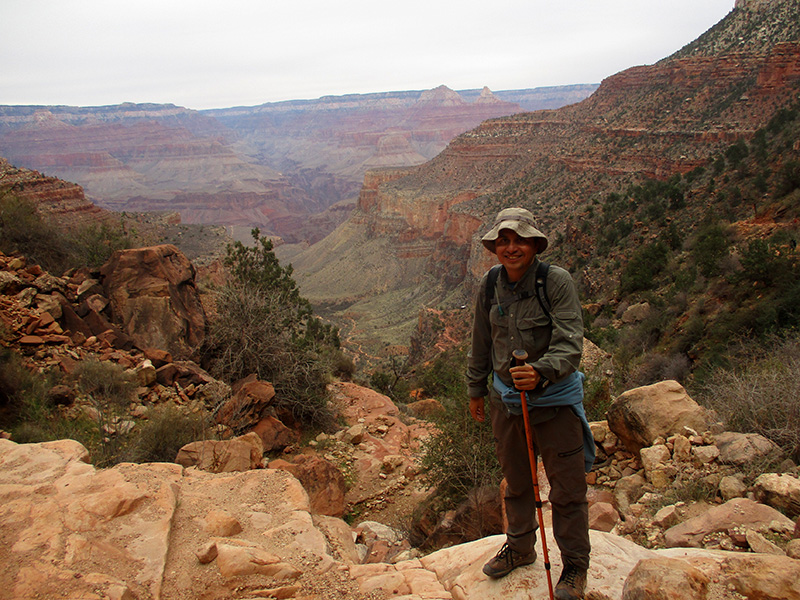 We still had another 4.6 miles to go past Indian Garden. Here is where you realize that the hike is almost as much a mental challenge as a physical one. Going relentlessly uphill for miles requires determination, the ability to rest without losing momentum, and the power to appreciate your surroundings without letting the stunning scenery slow you down. You have to move quickly to finish before dark, when hiking gets trickier and colder. 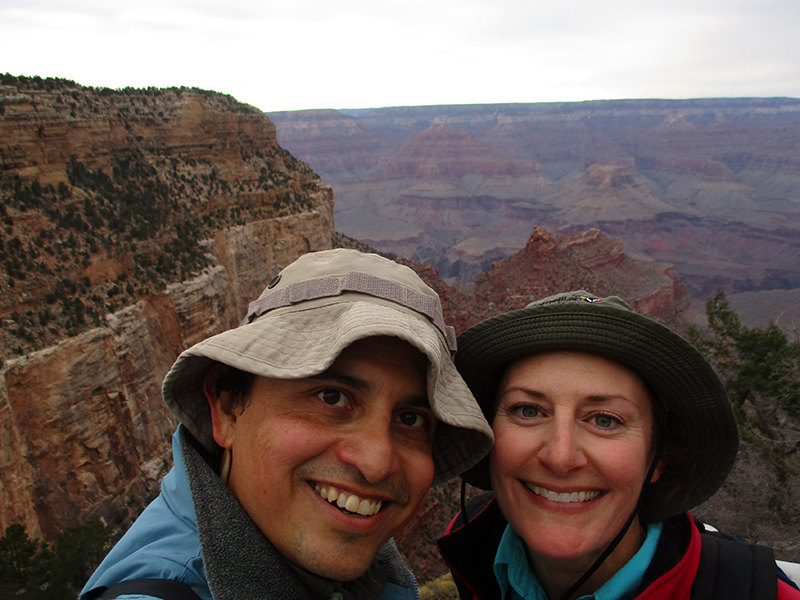 The air indeed grew cooler as we climbed and came to several punishing sets of switchbacks. Two rest houses — at three miles below the rim and again at 1.5 miles from the trailhead — break up the hard slog and offer a reminder to take a breather and enjoy the views. 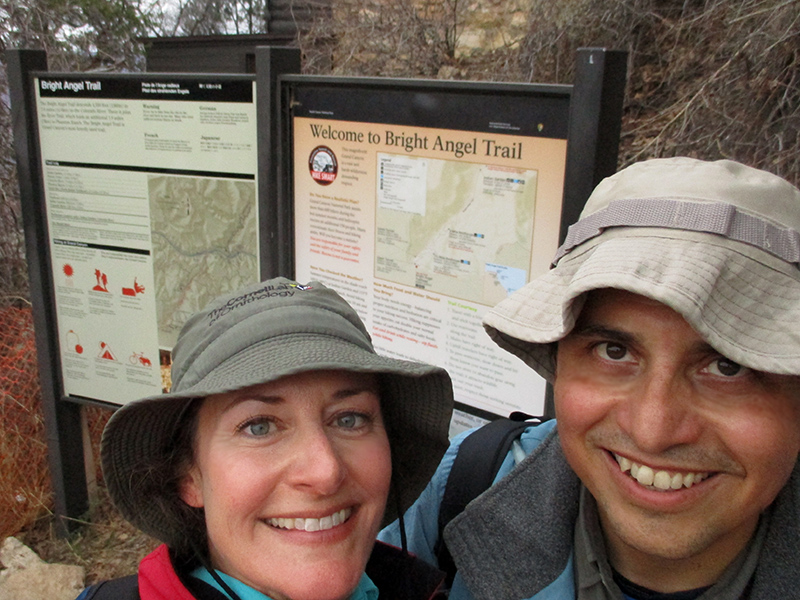 Before we knew it, we had reached the rim. This time we finished faster than ever, at just under nine hours with ample stops, and we both felt full of energy and enthusiasm instead of the usual exhaustion. Perhaps it’s because we were in good shape, having spent virtually the entire year hiking up and down mountain trails throughout the country. Or perhaps it’s because of our excitement about the 100th anniversary of the national parks and our Project 100 adventures. 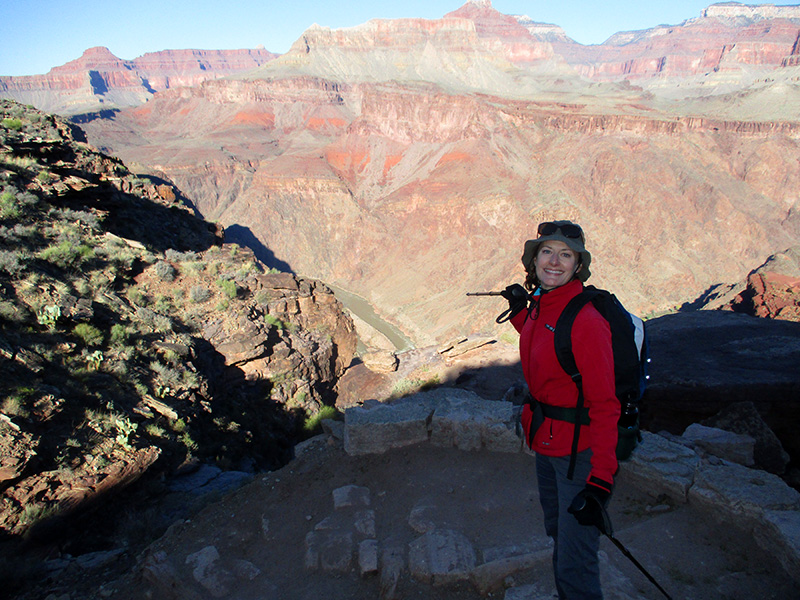 We wondered if the Grand Canyon would still awe us after all the amazing scenery, impressive canyons and geologic wonders we experienced in other parks during the centennial. The answer is a resounding yes. There is nothing as stunning as the Grand Canyon. This hike (which of course made the list of our favorite Project 100 hikes) reaffirmed that the park in our back yard, the one we know the best, is still one of the grandest places on Earth.

4 thoughts on “A Grand Hike in the Grand Canyon”