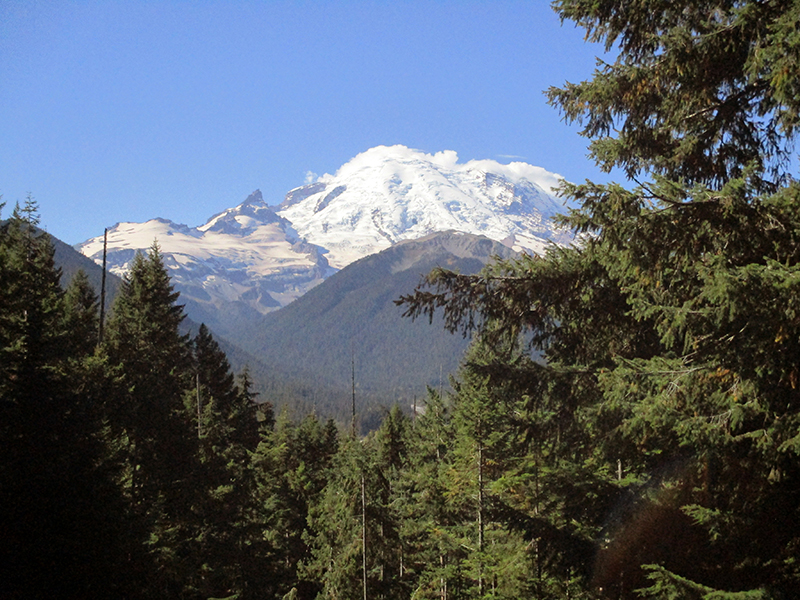 On a clear day, you can see the imposing, snow-topped Mount Rainier from Seattle some 50 miles away. But the 14,410-foot white monster of a peak is even more humbling when it stares you in the face along Mather Memorial Parkway, the road that enters the northeast corner of Mount Rainier National Park. This tallest volcano in the Cascade Mountain Range is also the most glacier-bound of all the peaks in the Lower 48 states. Modeled after Yellowstone, in 1899 Mount Rainier became the fifth national park, protecting this area of pristine forest from what could have been unfettered resource extraction. Thus, this long-standing park comes with a good dose of history to complement its stunning natural scenery. 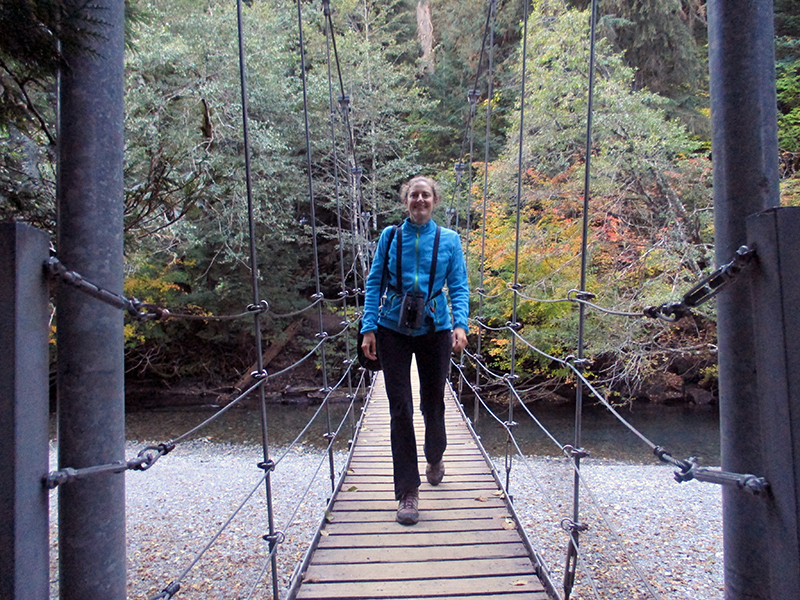 When we arrived at the Ohanapecosh Campground in the southeastern corner of the park in late September, we had our pick of campsites and chose a sunny spot to dry out from our very moist stay in Olympic National Park. The soothing effect of the gurgling Ohanapecosh River running through the campground — combined with warmer nights at this relatively low elevation — further appealed to us as a restful place. The Ohanapecosh River is also one of the few clear streams in the park because it contains so little glacial runoff; most of the other creeks and rivers are milky-white or dingy gray. 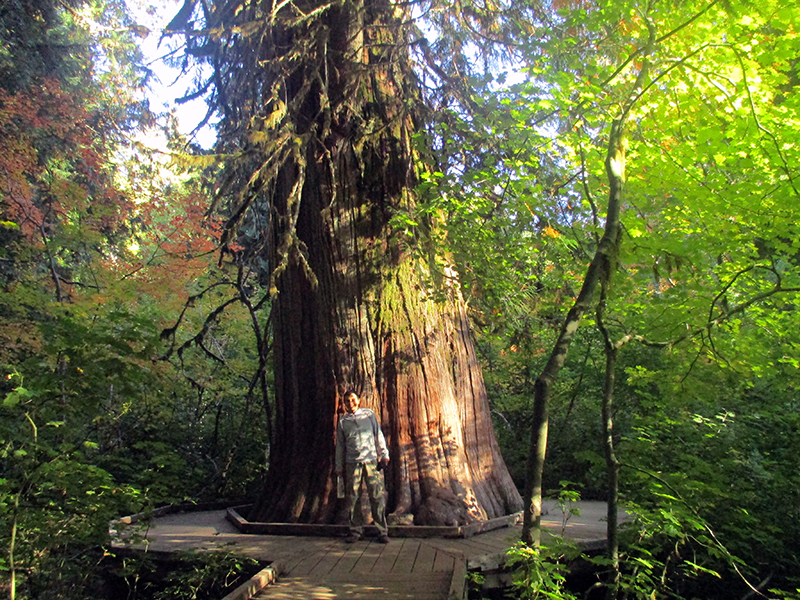 A short distance up the road is the Grove of the Patriarchs Trail, which meanders through old-growth forest along the Ohanapecosh River. On the trail are massive old trees such as the Twin Douglas-firs, which are largely dead but still standing after 1,000-plus years on the planet, and the Big Cedar, a still-living giant whose circumference tops 50 feet! 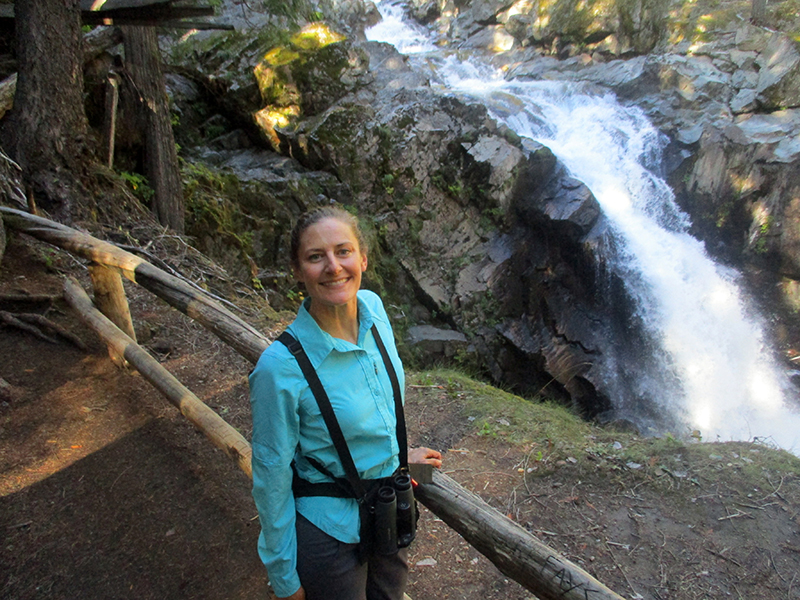 The next day we hiked from our campsite along the Silver Falls Trail, which led past an old hot springs site. Back in the 1920s — before an expansion of the national park in 1931 that encompassed the Ohanapecosh area — a private tourist resort here enticed visitors to soak in the healing thermal waters. The old lodge eventually became an eyesore and resulted in degraded environmental quality, so in the late 1960s the National Park Service dismantled the buildings. The springs have since reverted to their natural state as steamy, soggy seeps and provide another clue that this area is still active geologically. 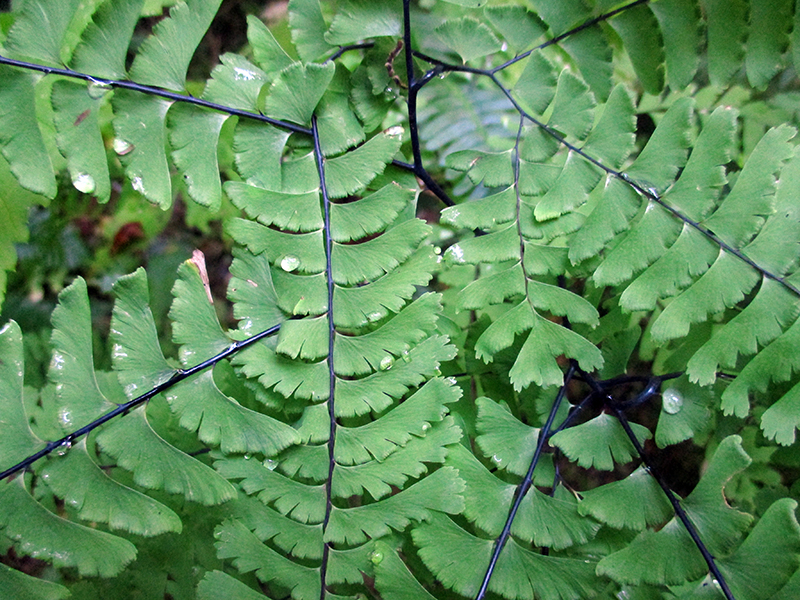 We continued uphill to Silver Falls, then connected to the steep Cowlitz Divide Trail to ascend through moist forest full of black-stemmed maidenhair ferns. But I loved most the vibrant array of fungi and slime molds. One decaying log sported a collection of wolf’s milk in two stages of development: pink, goo-filled globules (the fresh fruiting bodies), and chocolate-brown globules filled with cocoa powder-like spores (the more ripened stage of the fruiting bodies). 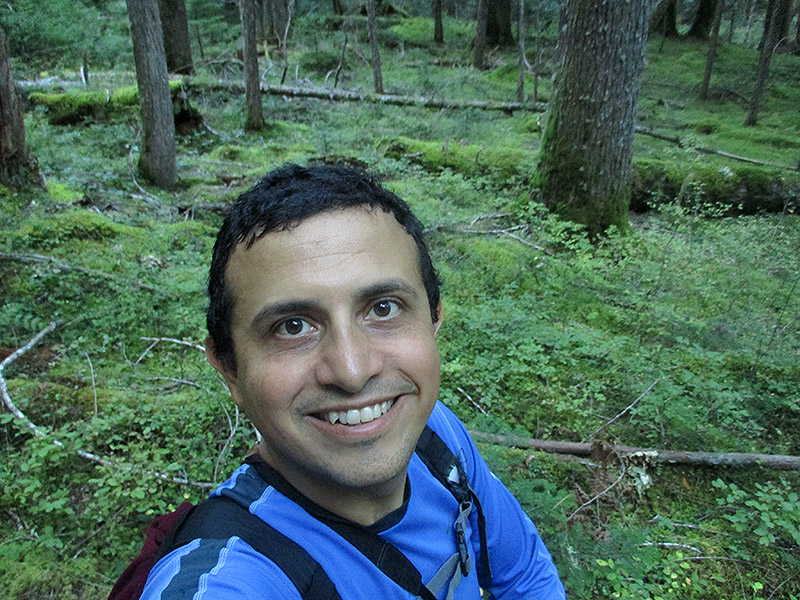 After trudging along for several miles without topping out to a viewpoint, we decided to head back downhill and took the looping trail back to camp. The entire time we passed only a small handful of other hikers. In this section of mossy forest, our only company was a family of deer. Ah, green tranquility. 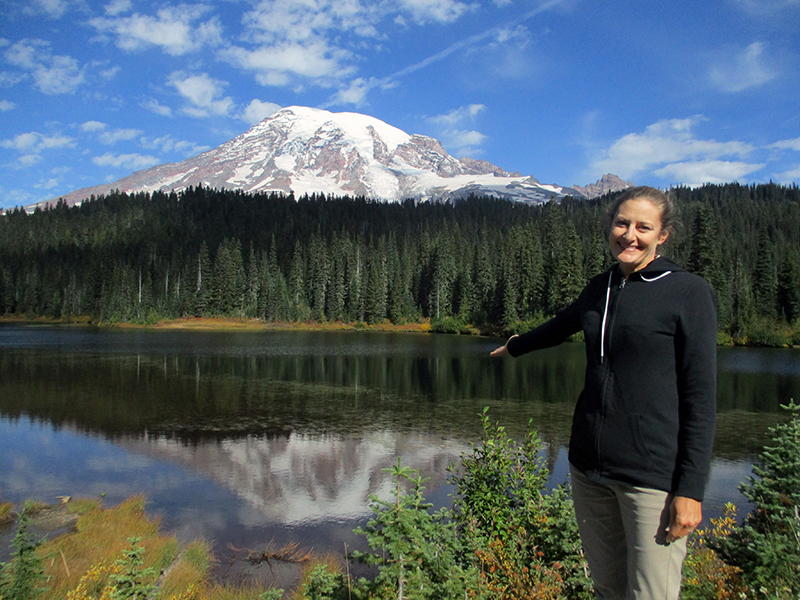 The next day we drove up the mountain, past the Reflection Lakes that mirror Mount Rainier and the Nisqually Glacier, to the aptly named Paradise district. At 5,420 feet, the Paradise Inn and Visitor Center lie alongside a sub-alpine meadow that, at the time of our visit in early fall, was carpeted with deep red heather tinged gold, pink and orange. 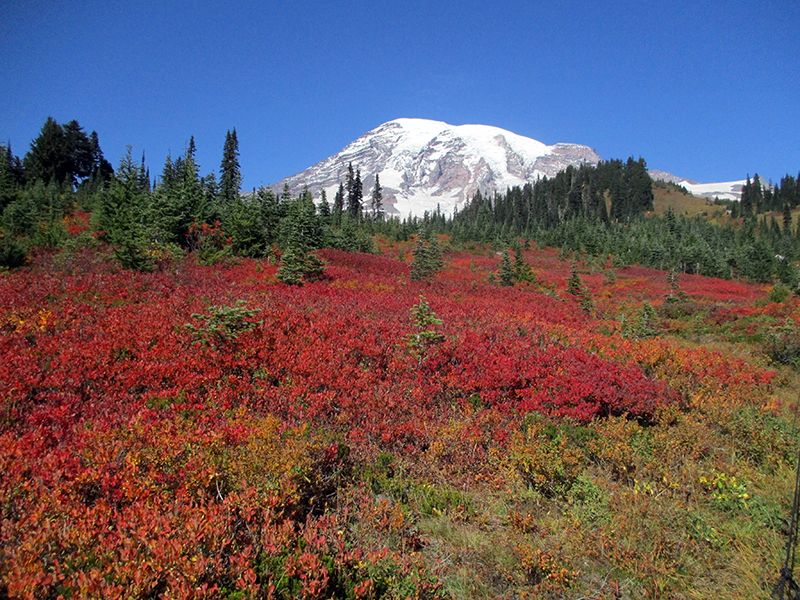 We had a picnic lunch with the mountain looming above us, then set off on foot counter-clockwise up the Skyline Loop Trail from the Visitor Center. As was the case in the last several parks we visited, this trail rated among our favorite hikes all year. The path started out paved and rose at a sharp incline, with incredible meadow and glacier views the entire way. Soon Oregon’s Mount Hood came into view. Black-tailed deer, a hoary marmot, fat ground-squirrels and chipmunks feasting on red berries went about their business as we walked. 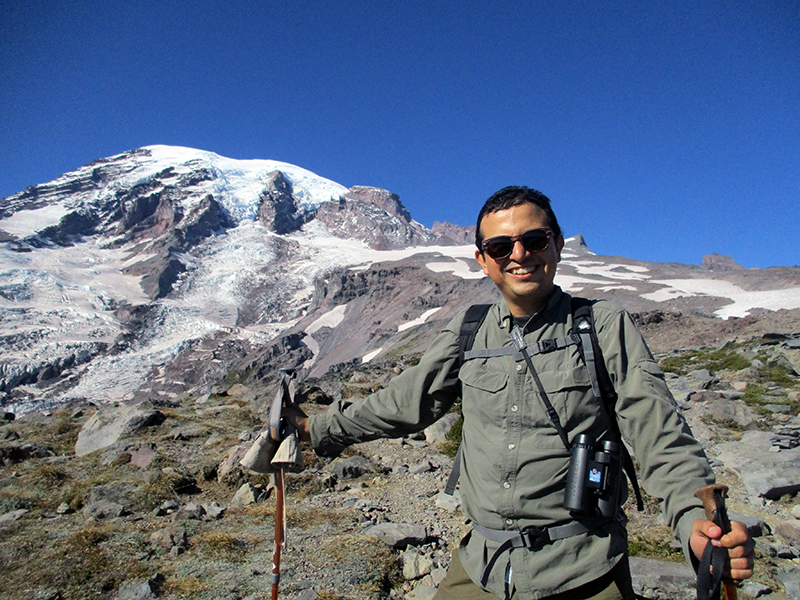 Eventually we reached the tree line and the trail turned to scree, reminding us of high-altitude hiking in Mexico. As we reached Panorama Point at 6,800 feet, I focused my binoculars on the icy slopes of the mountain above us and saw tiny climbers making their way across the Paradise Glacier. It’s both daunting and compelling to contemplate summiting Mount Rainier. Although Rainier’s apex is some 4,000 feet lower than Mexico’s highest peak, Orizaba, its deep glaciation increases the difficulty. I couldn’t stop thinking that one day we need to attempt this trek, if nothing else to compensate for our 2010 Orizaba excursion. Hector noticed the twinkle in my eye, and I confessed that the Rainier bug might have bitten me. He agreed to think about a future return trip to hike to the top. Anyone want to join us? 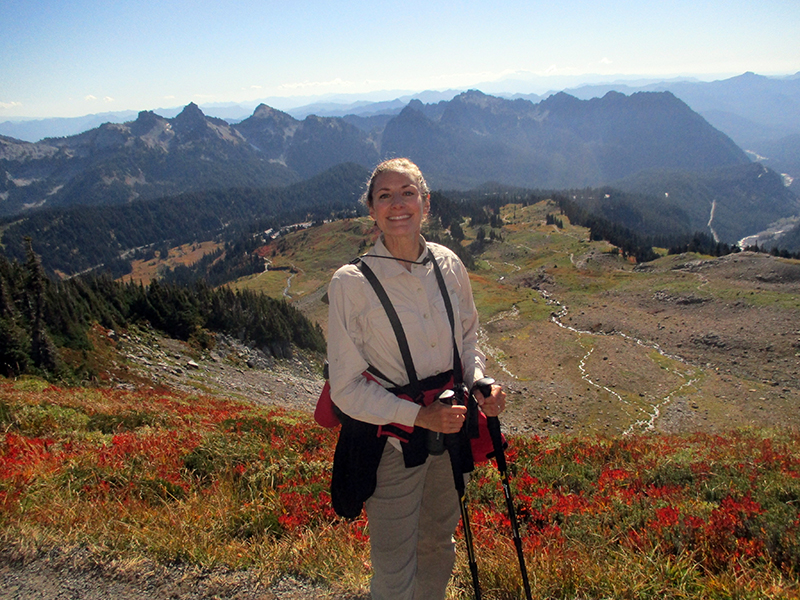 We continued uphill and rounded the high point of the Skyline Trail, then dropped back below the tree line through wonderful views of creeks, meadows and the Tatoosh Range across the way. It was a perfectly glorious hike on a perfectly glorious day. The weather was superb with unobstructed views of the mountain, which not every visitor has the good fortune to see. 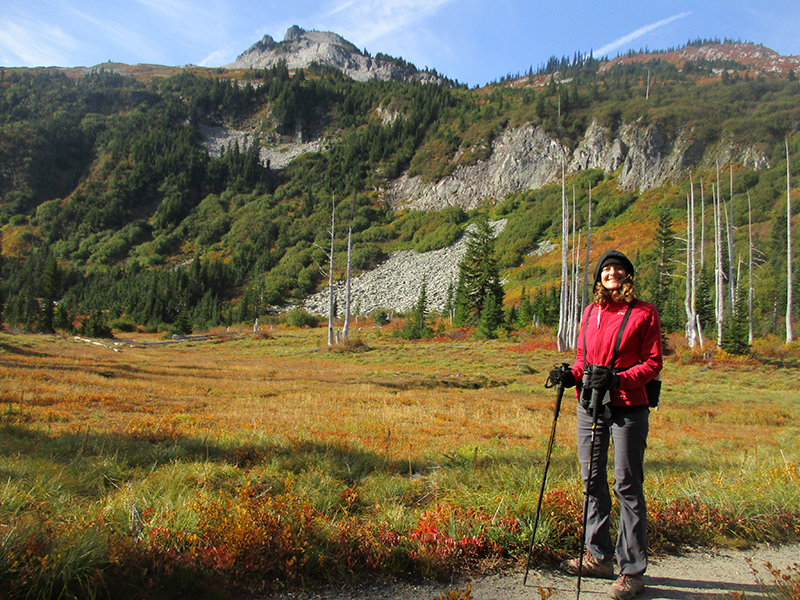 The following day, sadly our last in the park, was more typical, dawning cool and cloudy. Yet, driving back up Paradise Road through a thick fog that shrouded the mountain, we eventually surfaced above the low clouds and had blue skies. We parked and began the short but picturesque hike to Bench Lake and Snow Lake. The trail cut through sub-alpine meadow ablaze with red, orange and gold in the morning sunlight, then came to a thick patch of undulating forest teeming with chattering chickadees and nuthatches. 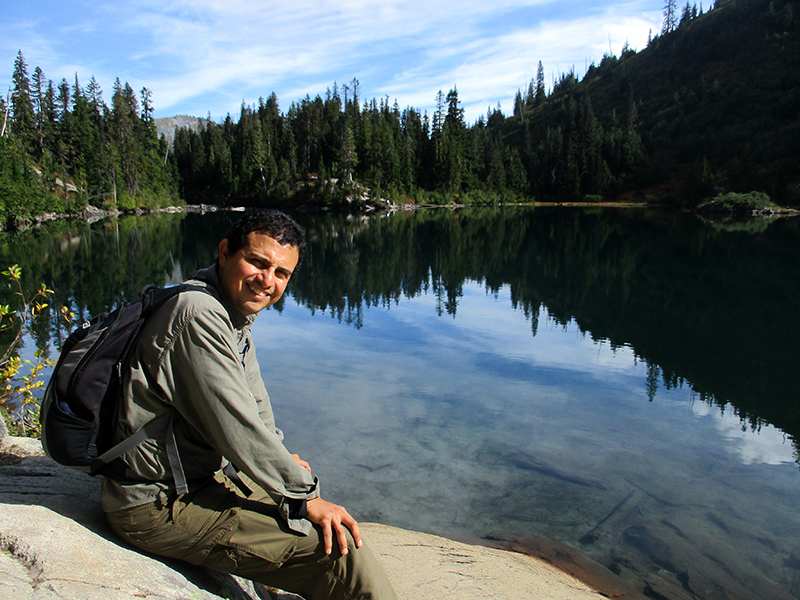 Of the trail’s two small lakes, Snow Lake is prettier — an evergreen-fringed gem set in a glacier-carved bowl of scree. We could hear the echo of squeaking pikas as we hiked, but they remained hidden among the boulders. Savoring the tranquil scene at the edge of Snow Lake, we had to pull ourselves away for the return trip through the forest back to the car.

On our way out of the park, we drove westward down the mountain to the Longmire Historic District near the southwest entrance. Once again below the clouds, it was misty and chilly. After a hot lunch at the National Park Inn, which dates back to 1906, we checked out some of the rustic log-and-stone buildings nearby that still stand today as a National Historic Landmark. We then went for a stroll on the Trail of the Shadows, which circled a large wetland of hot springs. The path also passed the reconstructed Soda Springs mineral bath and the old Longmire Cabin, where developer James Longmire built a homestead and resort in the 1880s. This was an even larger operation than the Ohanapecosh hot springs. 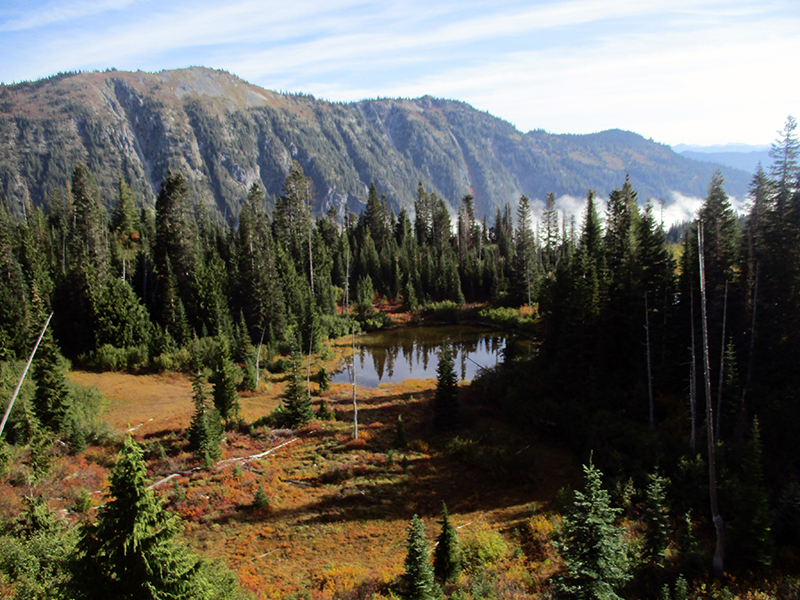 With 97 percent of the park protected as wilderness area, we left so much unexplored. That gives us another reason to return someday, but even so, isn’t that the point of wilderness? To leave some places unexplored and unexploited? The 1964 Wilderness Act defines wilderness as being “in contrast with those areas where man and his works dominate the landscape” and “where the earth and its community of life are untrammeled by man, where man himself is a visitor who does not remain.” Many national parks include vast acreage of dedicated wilderness areas, whose very declaration shows a sense of restraint, humility and respect (all qualities, sadly, in short supply these days). Perhaps that will be my own personal goal for 2017 — to strive for greater restraint, humility and respect. Anyone want to join me?