The charming, tidy town of Westport in County Mayo is a big one for music, so despite our long day’s drive down from County Donegal, Hector and I summoned the energy in the evening to stop in at Matt Molloy’s, the pub owned by the Chieftains’ flute player. After ordering our pints of Guinness, we proceeded to the session in the back room packed with locals and tourists alike enjoying traditional music played by an accordion, flute and fiddle trio. The performers in these sessions often sit in a corner of the room next to diners and drinkers rather than on a stage, making it a much more personal experience.

In contrast to the fantastic live music at Matt Molloy’s, the next morning our B&B had dreadfully sappy instrumental versions of Irish classics like “Danny Boy” and “When Irish Eyes Are Smiling” playing loudly in the dining room (in radio station lingo it used to be called “beautiful music,” a term that still makes me snicker because it’s usually anything but). The other B&B guests didn’t seem to mind it, and one even complimented the owner on the “beautiful music” they were playing. Snicker, snicker. With a hearty full Irish breakfast in our bellies, we borrowed walking sticks and set off to hike nearby Croagh Patrick that looms above Clew Bay. 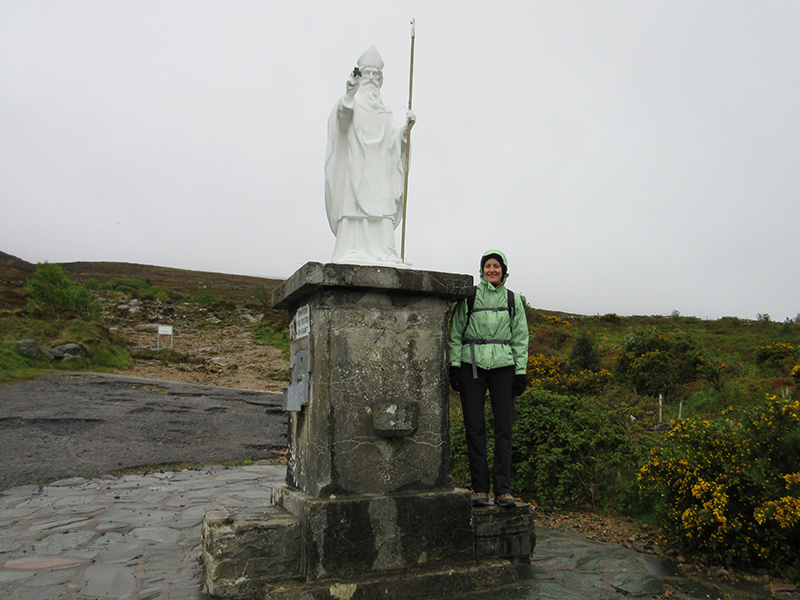 Back in the fifth century St. Patrick fasted at the top of the mountain for the 40 days of Lent. I’m not sure what kind of weather he had to endure, but it was a cold and misty day for us, reminiscent of my first climb back in 2005. Even on a pleasant day (which I had the incredible good fortune to experience when I returned to Ireland in 2006), the trail to the 2,500-foot summit is a steep, relentless trudge through what in many places is rocky scree that’s tough to get a proper foothold on.

But soon enough Hector and I made it to the top. Although the thick fog obscured views of the valleys below and the wind blew furiously, we felt we had accomplished something meaningful, particularly after failing to summit Errigal the day before. With high winds and visibility extending only about 30 feet in front of us, we had no desire to linger very long at the top. It was just as well, because we began to worry that time would run out on us in the pay-and-display carpark at the base of the mountain. In an effort to avoid a ticket, we raced downhill. 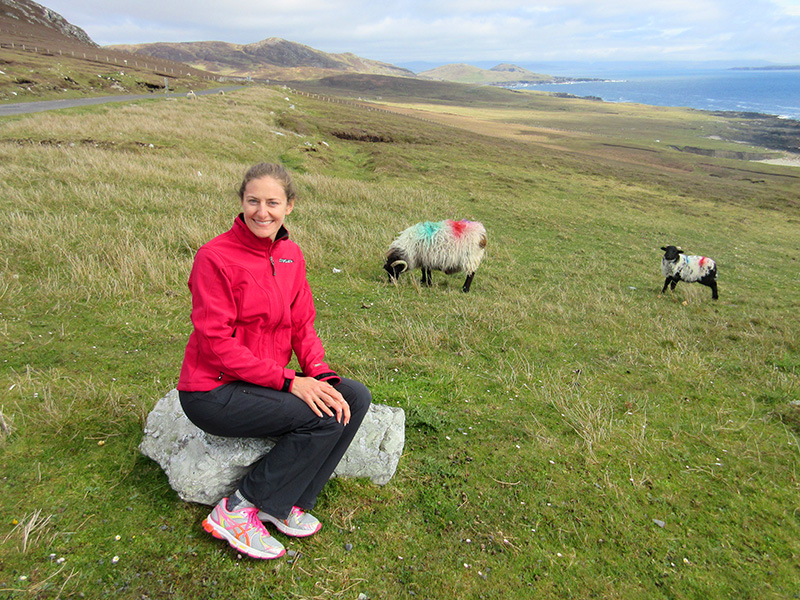 From there we drove on to Achill Island. In places the land gently slopes down to the sea, and in other places waves crash against tall, rocky cliffs. As elsewhere in rural Ireland, the ever-present sheep are splashed with dots of color, presumably for identification (you hear many different explanations from locals; comment below if you think you know the definitive answer). Achill’s natural scenery of beaches, farmland and sea views rivals the beauty of the human settlements here — both present-day coastal villages and ruins of old cottages and cemeteries. We took too many photos to include here, so check out a separate post with more Achill Island photos here.

Back in Westport at the end of another long day of sightseeing, we headed for the pubs. We visited several, but in particular the jam-packed M.J. Hoban’s Bar was worth squeezing into for its traditional music session. Here the performers eschewed the typical drinking songs like “Whisky in the Jar” and played lesser-known ballads, jigs, reels and hornpipes. Some were in English, some in Gaelic, some we could sing along to and others were new to us. Now that’s what I call beautiful music.

Next up: we move south into County Galway.

One thought on “Mayo – Music to Our Ears”