Petrified Forest National Park in northern Arizona is a step back in time, as far back as the Triassic Period and as recently as the 1940s. The park includes two sections — the Painted Desert section largely north of Interstate 40 and the Petrified Forest section south of I-40. 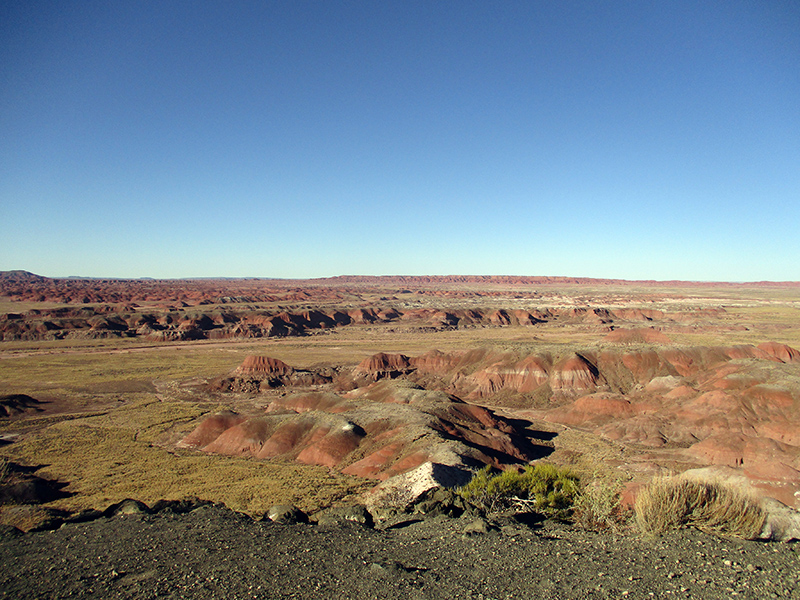 We stopped off first at the Painted Desert, which features a large swath of badlands in the Chinle Formation, whose layers of sedimentary rock color the landscape in bands of orange, red, pink, lavender, blue and gray. 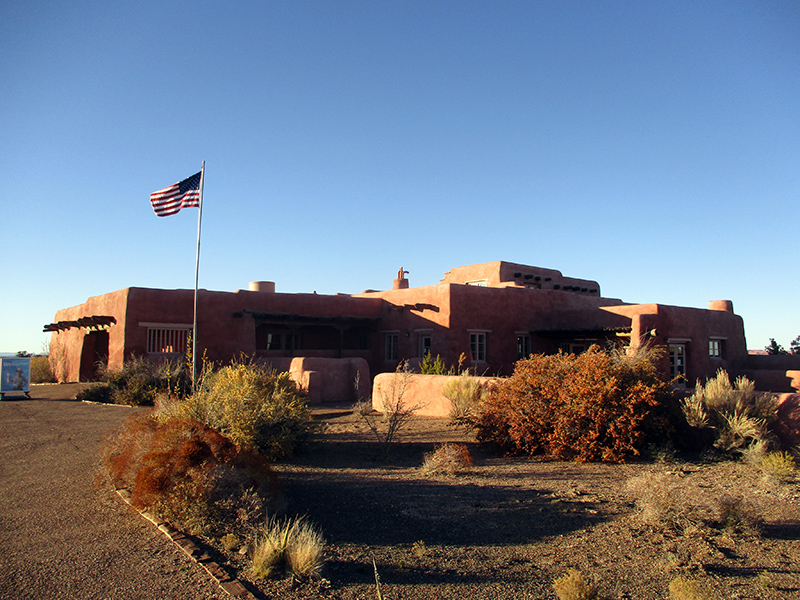 Almost more than the landscape, we enjoyed the history of the Painted Desert Inn, a National Historic Landmark. Originally built of petrified wood in the 1920s and called the “Stone Tree House,” the main lodge had six tiny guest rooms. The National Park Service bought the property in 1936 and the Civilian Conservation Corps gave it a facelift, with crews shoring it up structurally and stuccoing over the stone to give it a Pueblo Revival look. 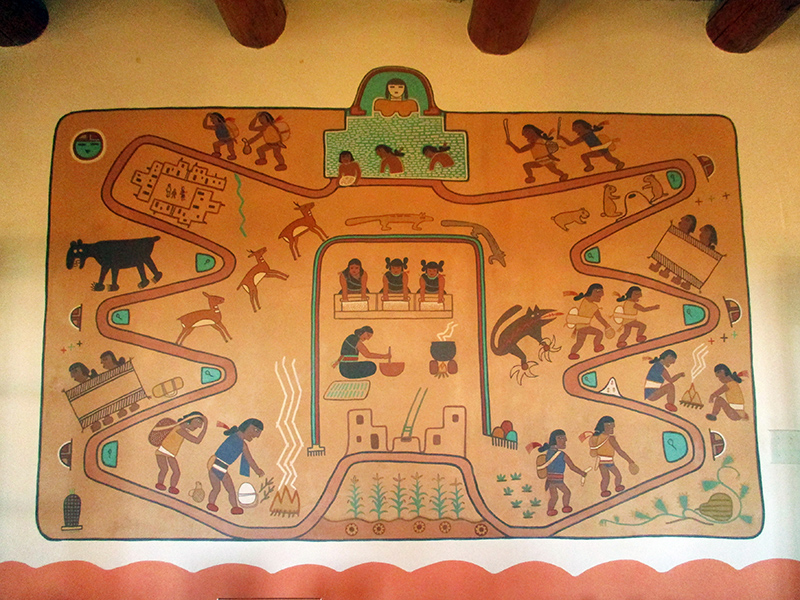 The Park Service reopened the facility to visitors in 1940, with the Fred Harvey Company operating the inn (as well as several facilities at the Grand Canyon and throughout the Southwest). At that time, Hopi artist Fred Kabotie was hired to paint three murals on the dining room and lunchroom walls to reflect the region’s Hopi ties. The Buffalo Dance, Salt Lake (above) and Corn Planting murals, which fit beautifully within the building’s décor, are among the inn’s most compelling features. 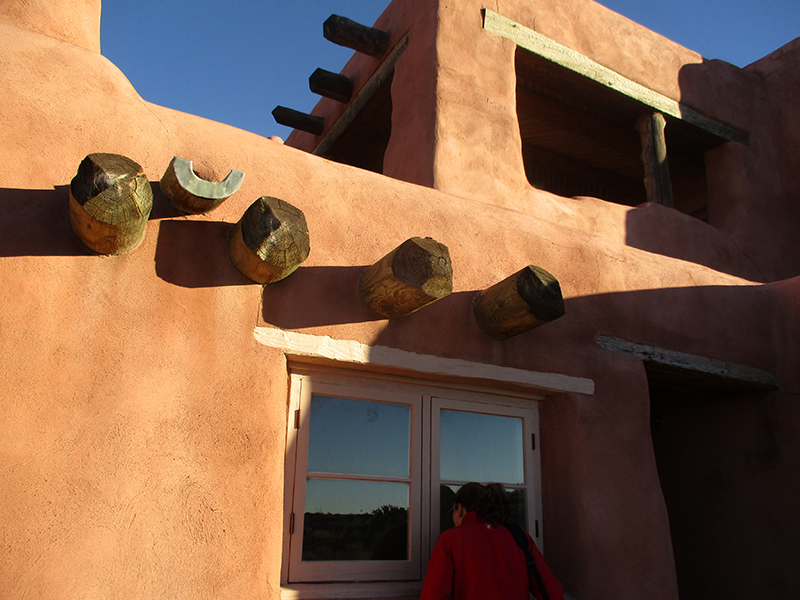 The inn closed in 1963 and had fallen into disrepair once again, but public interest in historic preservation saved the building from demolition in 1975. More restoration has since been completed and the building now serves as a museum and bookstore. Even though you cannot enter any of the historic guest rooms, you can peek through the windows to see what the simple accommodations looked like. 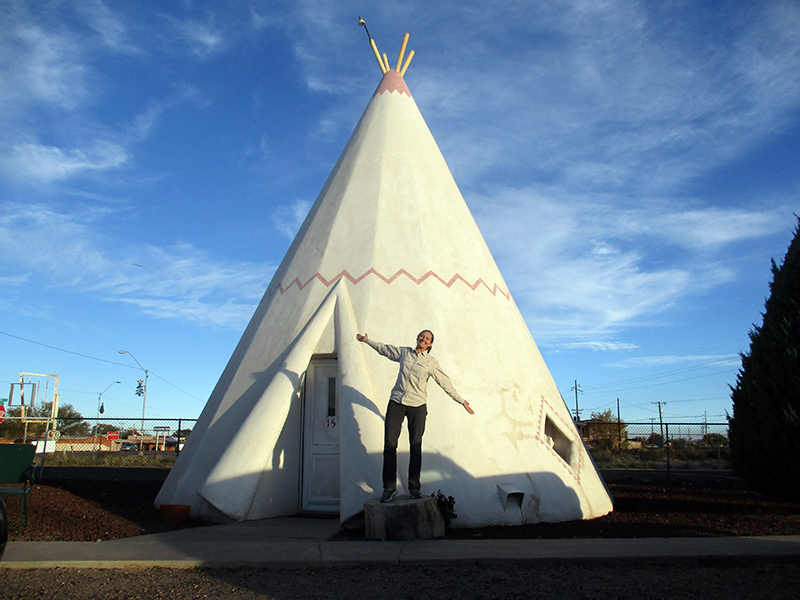 We then moved on to our own accommodations at the Wigwam Motel in Holbrook on the old Route 66. We had stayed in one of the teepees here five years earlier on a trip to Monument Valley and enjoyed the whimsy of the place, which is another walk back in time, to the heyday of mid-century road travel. 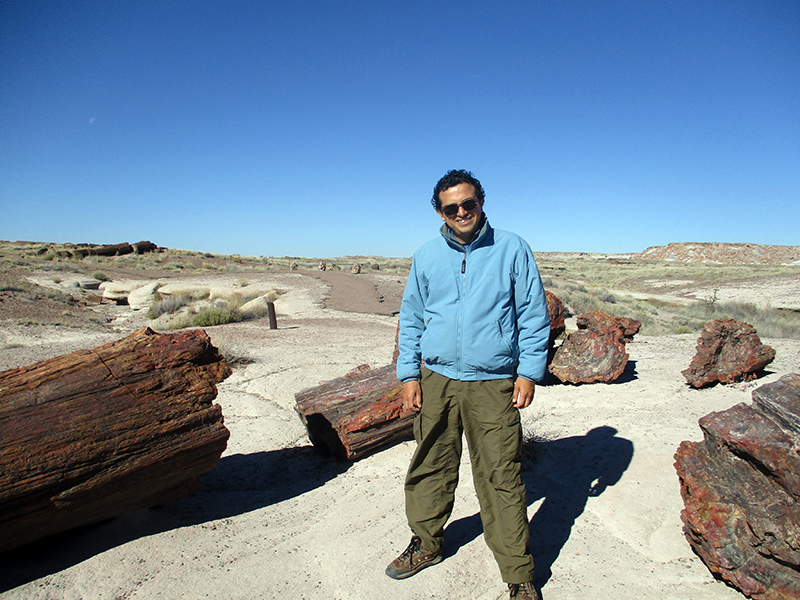 We devoted our second day in the park to the more extensive southern section, where most of the petrified wood occurs. The Rainbow Forest Museum has a small but excellent exhibit on the geology and paleontology of the area, and right outside the back door sit some of the most impressive chunks of petrified wood. 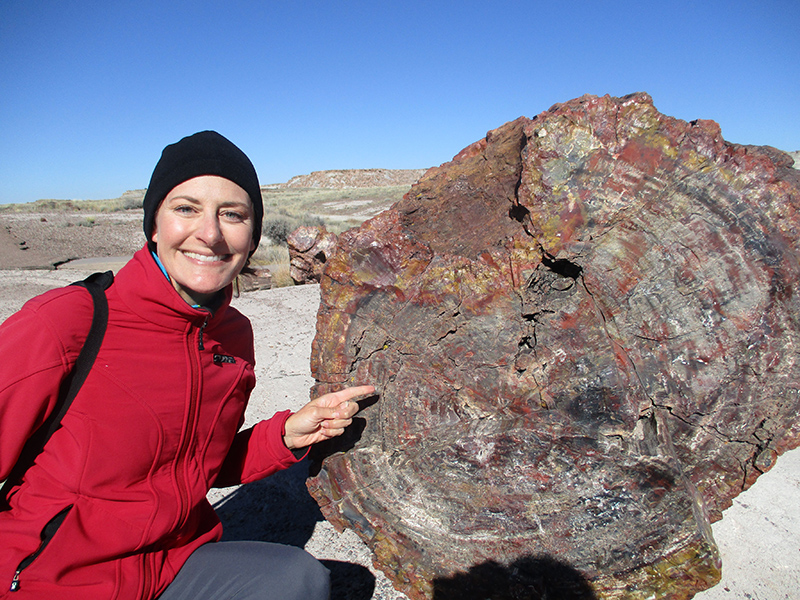 What was once bark, pith and other tree layers still show the texture of wood even though all the organic material was replaced by minerals some 200 million years ago. At first it’s hard to wrap your head around the process of petrification. In the Triassic Period, this part of what is now Arizona was tropical rainforest and swamp not far from the equator, until the continents shifted. Volcanic ash and other mineral-rich sediments covered fallen trees and cut off oxygen for bacteria that would otherwise decompose the wood, thus preventing the trees from decaying into the soil. Over time, cell by cell, those minerals replaced the cellulose of the trees. And interestingly, tree rings seem less pronounced on the petrified logs here, largely because tropical areas lack the sharply defined growing seasons that produce clearly delineated rings found in temperate-forest trees. 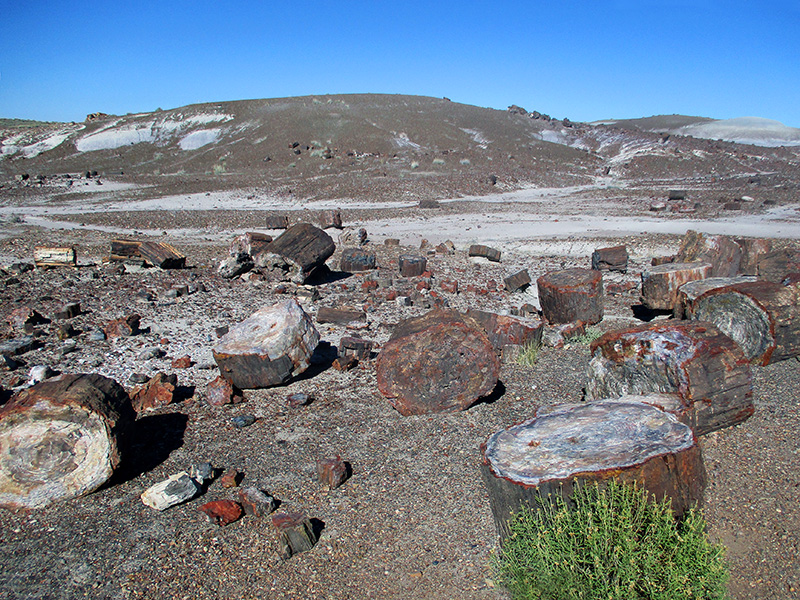 Three different kinds of petrified wood exist here: mineralized (which shows hues of red, purple, pink, yellow and green because it has absorbed the color of different minerals deposited around the wood), permineralized (which looks white and chalky), and crystallized (whose glassy components make it glitter in the sun). A great many animal fossils also exist here, especially of early dinosaurs and species related to crocodiles. Those species first appeared in the Late Triassic, and their remains occur alongside fossils of the Triassic plants that decorated their world, including ferns and cycads.

We took a few of the short hiking trails, including Long Logs, Crystal Forest, Jasper Forest and Agate House. Much of Agate House still stands, even though Ancestral Puebloans built and occupied the eight-room structure between 1050 and 1300. What looks like gravel scattered on the ground throughout the park is actually tiny bits of petrified wood. 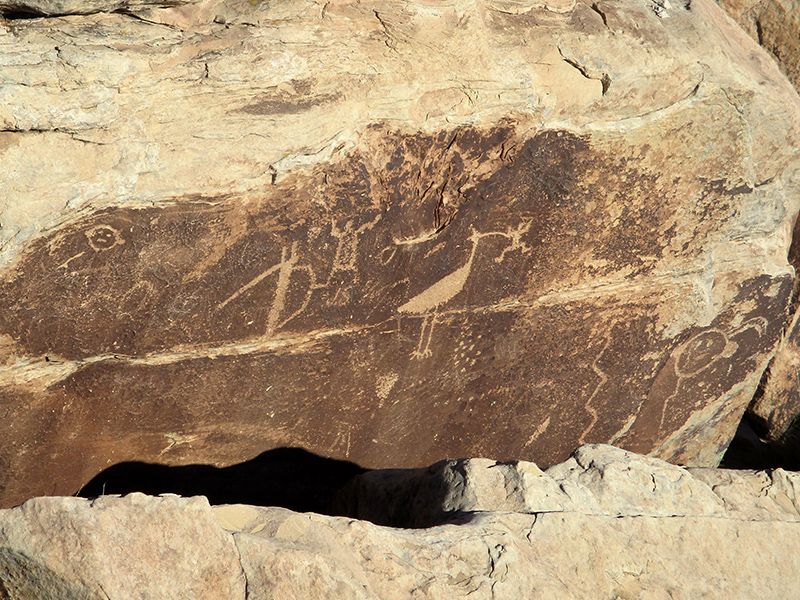 We stopped at two spots that contain additional remnants of relatively recent history: Newspaper Rock and Puerco Pueblo. Both have petroglyphs left by Ancestral Pueblo people, and Puerco Pueblo contains outlines of their homes and a solar calendar that marks the summer solstice. 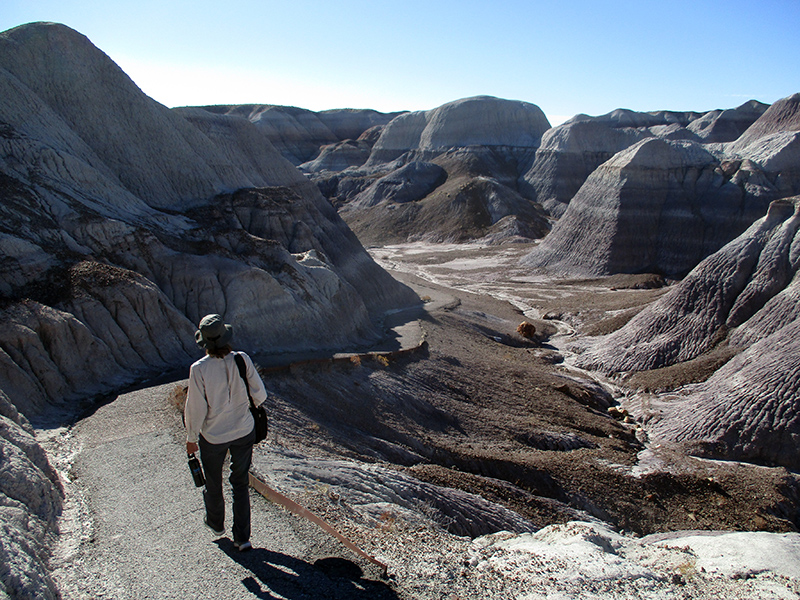 The final place of interest we explored was Blue Mesa, which offers a short hike down into the Badlands. Here the rock layers have a bluish-gray cast and, thanks to vertical erosion lines, look like wrinkly elephant skin. As in Badlands National Park, so many of the rock formations look crumbly enough that they could wash away in the next big rain storm. 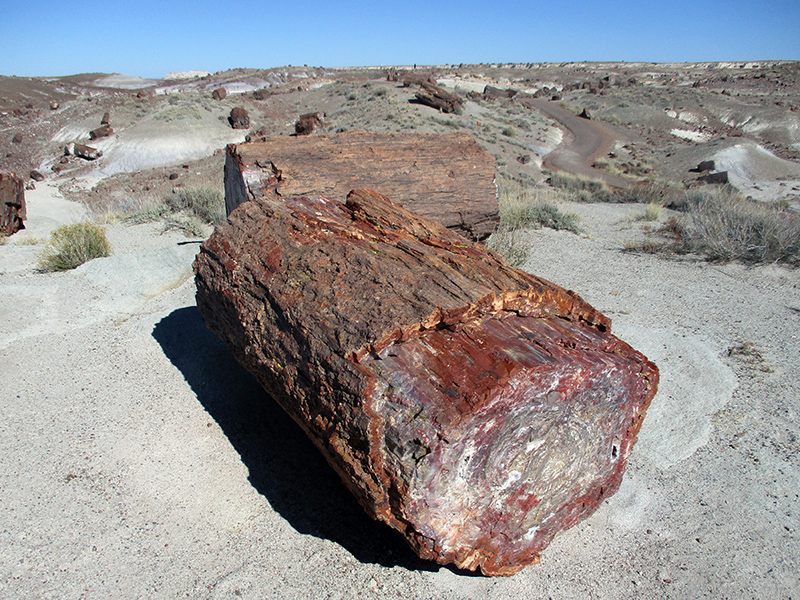 Walking these trails and contemplating the Earth on such an enormous time scale, I felt some of my present-day worries falling away. It’s easy to fret about the decisions that we humans make, but in the grand scheme of things we are extremely inconsequential. If our planet’s existence were condensed into a year, hominids wouldn’t appear until 11:15 p.m. on Dec. 31, and recorded human history wouldn’t start until a few seconds before midnight. We will someday disappear as most other species have throughout the Earth’s history, but no matter what we do, the planet will persist.

Although we had visited Petrified Forest National Park before, we’re glad we returned here during project 100. We learned a few new things this time, which is true of any national park. There is always more to reflect on the second time around.

4 thoughts on “History and Prehistory in Arizona”