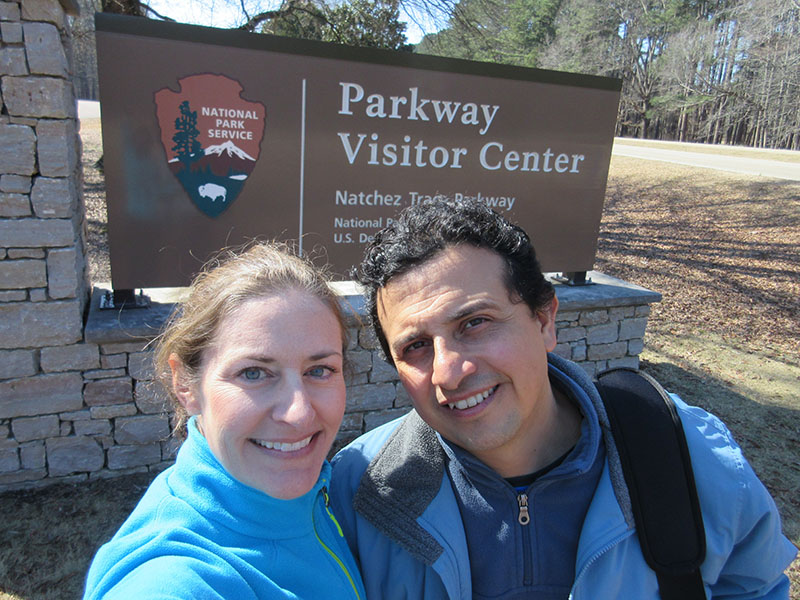 Our next park destination was a joy to experience. The entire Natchez Trace Parkway runs from Nashville in Tennessee through Alabama and into Mississippi to its terminus in Natchez. We picked up the parkway a little more than a third of the way along in Tupelo, where Elvis Presley lived until he moved to Memphis with his family at age 13. 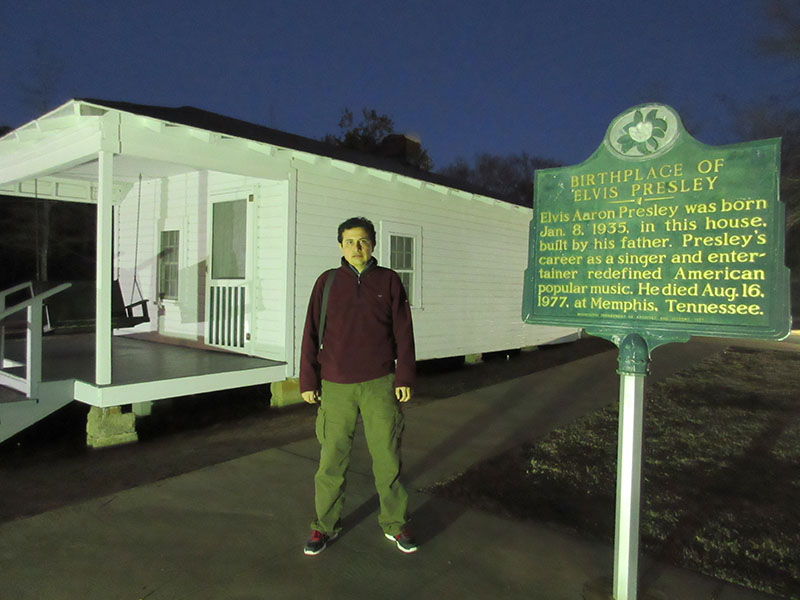 The evening before we set off on the Trace we went to Elvis’ first boyhood home, a two-room white clapboard house that shows his humble beginnings. The house now sits next to a museum and the Assembly of God church (moved from its original location to the Elvis Presley Birthplace complex) where he was introduced to Southern gospel music. Everything was closed by the time we arrived, but there was still enough to read outside the museum about his early days, and we had the place practically to ourselves. 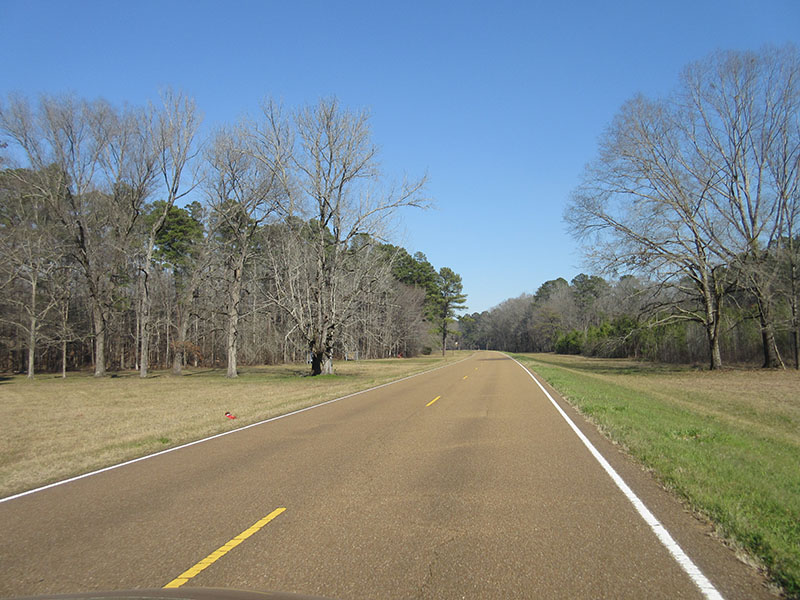 The next morning we began the trip south along this historic road. Driving is a true pleasure here, with a gas-saving 50 mph speed limit, no truck traffic (no commercial vehicles are allowed), hardly any other cars on the road, and a refreshing lack of junkyards, garish strip malls or suburban chain restaurants. It’s simply a beautiful drive through a park. As the Trace passes through mixed forest and gentle farmland, at times the road is elevated above the surrounding landscape and at other times it’s edged with tawny-green grassy meadows. Even the stretch through a large swath of broken trees damaged during a 2011 tornado had a stark beauty to it. Motoring along to the music of Elvis, Johnny Cash and Ray Charles, we couldn’t stop asking each other, “Isn’t this wonderful?” as the scenery rolled by. 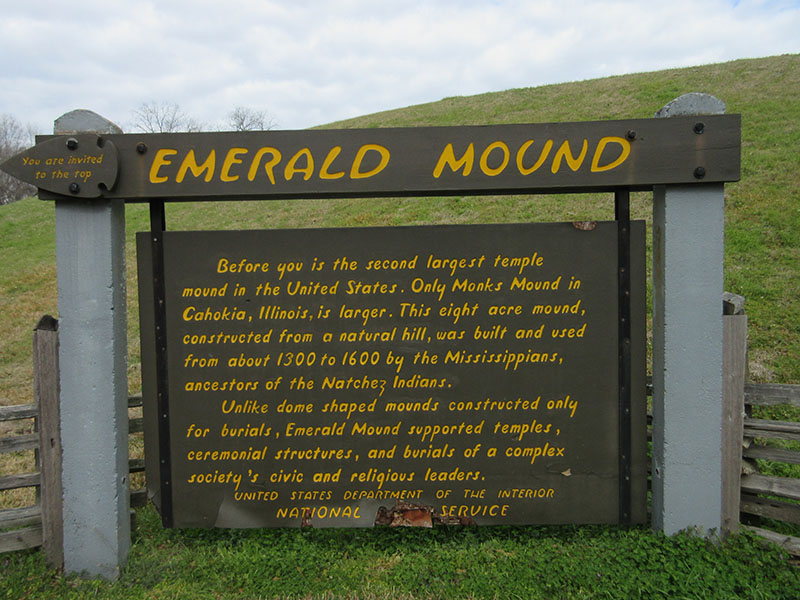 Many people make the drive to explore the historical sites and points of interest important to the Natchez, Chickasaw and Choctaw nations. At one point the Trace served as a travel corridor not just for these tribes but also for the “Kaintucks” from the Ohio River Valley, and it became a postal road connecting Natchez and Nashville in 1801. We bypassed most of the historical markers our first day to reach the Rocky Springs campground before it filled up.

There was little worry about finding a campsite, however, because only four other campers were there. It was extremely quiet until the frogs began to chirp at dusk, calling to mind nighttime scenes in movies that take place in swampy Southern backwoods. After dinner we spied a few pairs of glowing eyes and heard rustling sounds off in the woods but couldn’t make out what they might have been. It was a little creepy with the sounds of unidentifiable creatures nearby in the blackness and very few other people around. As we settled in to our sleeping bags for the night, we heard a pair of very loud barred owls hooting right outside the tent. We were awed. 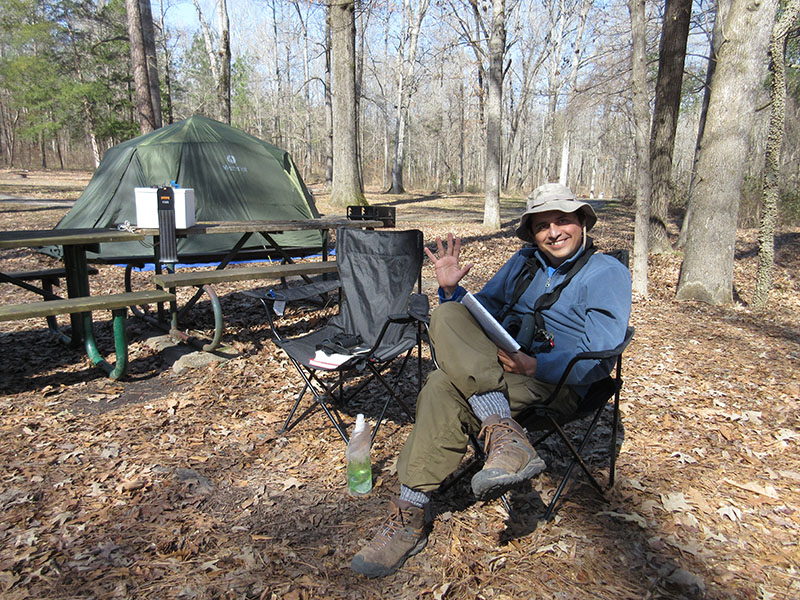 Thank goodness we camped toward the southern end of the Trace, which is also lower in elevation. The wind and cold temperatures in the forecast stayed more to the north so we had a very pleasant night’s sleep. We awoke to a symphony of birdcalls before sunrise and spent a relaxing morning at camp watching nearly 20 species of birds. The highlight of the morning was a pair of red-shouldered hawks that flew around and around, eventually settling on a high branch to mate.

The parkway has numerous hiking trails, some of which follow the historic route of the Trace. We went for an afternoon hike, hoping to get to the Owens Waterfall we saw on the map. However, apparently the trail gets very little use in the winter because we found it full of fallen leaves and eventually lost the route. I felt increasingly worried about copperheads lurking in every leaf-strewn dip in the trail, so after a mile or so we decided to backtrack. 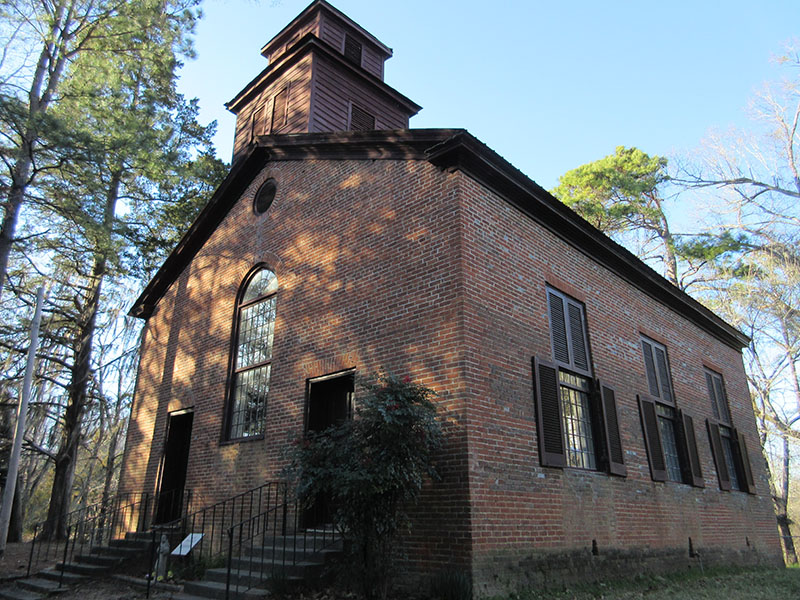 Instead we hiked over to the old Rocky Springs town site not far from the campground. Today all that remains is a church (which is still in use), a cemetery and a few cisterns. Park signage told us that at its high point more than 2,600 residents called Rocky Springs home — 2,000 of whom were slaves! Tragic that it took 2,000 unpaid workers to keep 600 people afloat. Yellow fever, the cotton-destroying boll weevil, land erosion from poor farming practices and the Civil War combined to send the town into the history books. 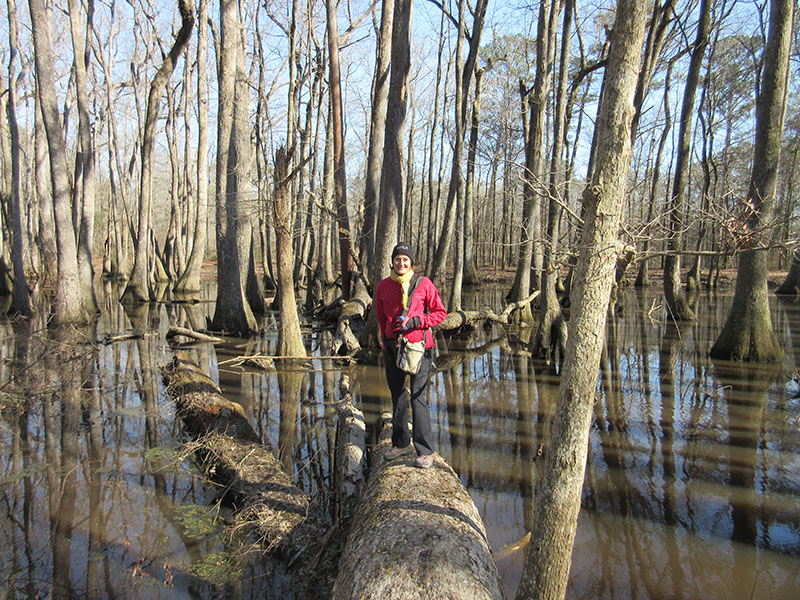 Our third day was a bit cooler, so we drove back north along the Trace to check out a few spots we had bypassed on the first day’s drive down. We took the Cypress Swamp trail through bald cypress and water tupelo trees standing in the water. We also had a picnic on the shore of the Ross Barnett Reservoir (pictured below) and went on another short trail before heading back to camp. Not wanting to risk a snake encounter on one of the harder-to-follow trails, we decided that this park’s true magic is experienced on wheels rather than on feet. Note to my cycling friends: the Natchez Trace Parkway is relatively flat, has little car traffic, and has numerous bike-only campgrounds along the route. Come check it out! 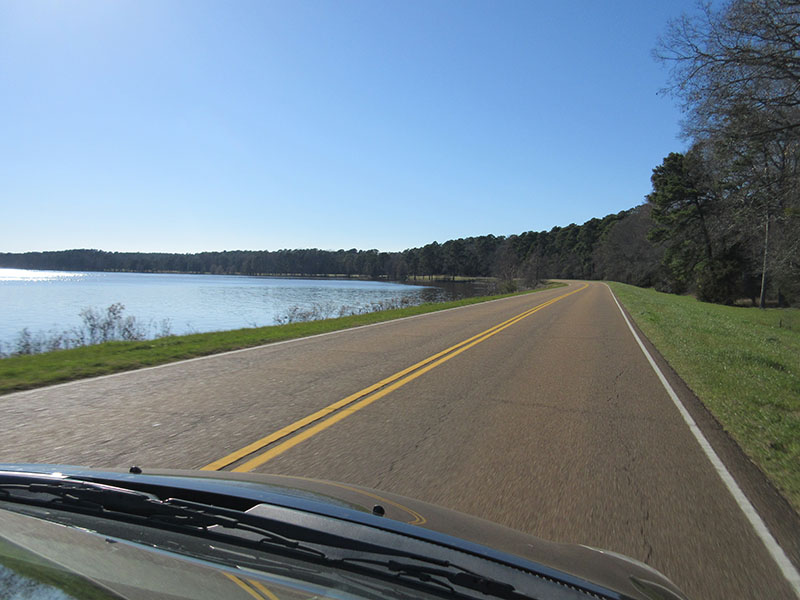 Another parkway plus is that the buffer of natural area provides the feeling of being well off the beaten path, yet it passes close to dozens of towns and cities where you can get gas and supplies. On the return drive we decided to stock up on groceries in the charming, historic town of Clinton. After a few days of camping we looked a little scruffy in our coats and knit caps, and the checker at the store was cordial but looked at us a little funny. I commented to Hector that perhaps she thought we were homeless. “We kind of are,” was his reply.

And as we arrive at the one-month mark here on Project 100, our state of semi-homelessness will continue for many more months this year. So far, though, even though we miss people from home, we’ve been enjoying our explorations too much to miss the comforts of an established address. Ah, the open road!