The green hills to the west of Virginia’s Blue Ridge Mountains are a beautiful sight to behold, and the view only gets better from atop Shenandoah National Park’s Skyline Drive. This 105-mile road forms the park’s central spine and contains pullout after pullout with magnificent vistas of the valleys below to the east and west.

As we arrived at Big Meadows Campground in the park’s Central District, the ranger on duty mentioned that five bears — a mother and her two new cubs plus two yearlings — had been hanging around nearby. We set up camp and were about to make dinner when we heard shouting, clapping and banging metal from campers deeper in the woods across the driveway from us. We figured it must be the bears, so dinner consisted of a few granola bars in the car, not for the first or last time this year.

We began the following day with a walk up to the Byrd Visitor Center to learn more about the park’s history. Shenandoah was created in 1935 to give people in the greater Washington, D.C. area a taste of what folks had in big parks in the West. Similar to Great Smoky Mountains National Park, that meant buying out the many residents already living on and farming the land, some of whom did not want to leave their homes and battled the National Park Service. Another less savory aspect of the park’s history was the creation — similar to Hot Springs National Park in Arkansas — of separate facilities for African-Americans in its early days. Although the federal government later mandated the racial integration of National Park facilities in 1945, it took Shenandoah five more years to become fully desegregated. Even so, that was more than a decade ahead of the rest of Virginia.

Our other objective at the Visitor Center was to talk with a ranger about options for our remaining five days in the park. With more than 500 miles of trails, choosing where to hike can be a bit daunting. Looking out the large picture windows that overlook the expansive meadow across the road, we thought we’d explore there first. This big, bold landscape resembled the African savanna, and we could almost imagine antelope and zebra grazing in the pasture. Visitors may roam freely on deer trails that crisscross the grass, but because Hector associates deer with deer ticks and the Lyme disease they carry, we stayed to the gravel track on one side of the meadow. (I later learned that mice are even more often the culprit than deer in spreading Lyme disease, so Hector has since loosened up a bit about deer.)

On our way back to camp, we saw the mother bear and her cubs feeding not too far away from the trail. They seemed not to notice us, so we stood quietly as they slowly moved on. A few minutes later we passed one of the yearlings. We gave it a wide berth but did not spark any apparent interest from that bear, either. We also seemed invisible to the many deer, including some with fawns, that call the park home. With their spindly legs, spotted fur and big-eyed faces, it doesn’t get much cuter than fawns that are merely days old. A bear showed up at camp as we started lunch, so it was back into the car to eat. 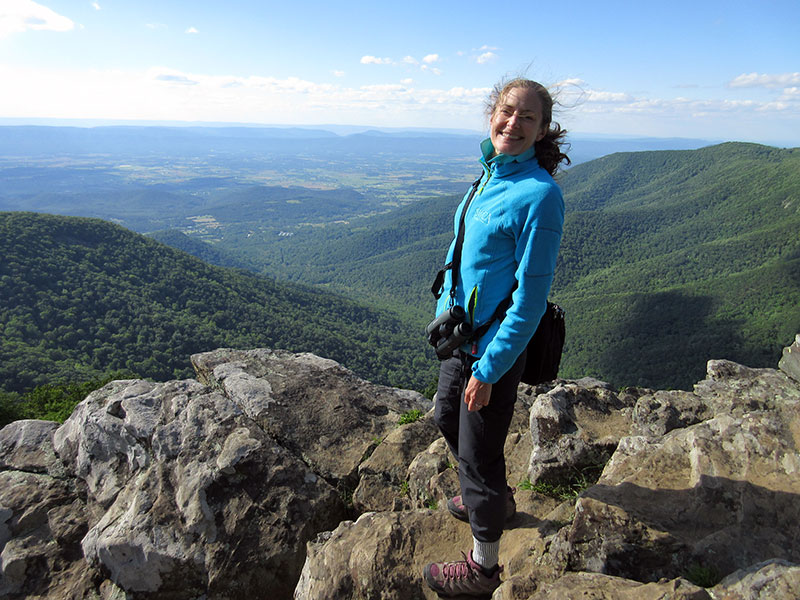 In the afternoon we hiked the Hawksbill Loop Trail, which rose steeply to an overlook at the summit of Hawksbill Mountain — at 4,051 feet, the highest peak in the park. From there we had spectacular views of the Shenandoah Valley below to the west. As we ended our hike on a section of the Appalachian Trail, another bear not far off in the woods largely ignored us. These black bears were smaller than we had imagined, and because we were quiet, kept our distance and had no food with us, they did not panic us like a grizzly bear would have.

The next day we set off on foot from our campground for the Upper Rose River and Dark Hollow Falls trails, a 6.5-mile forested loop that also took in a short stretch of the Appalachian Trail. This hike was pure delight. We descended along the Rose River with its many cascades and gurgles.

We passed yet another bear, this time closer to the trail, but quietly let it go on its way. And we had plenty of human company, especially as we turned the corner to Dark Hollow Falls and approached a large and popular waterfall. The trail then rose steeply back up to connect to the Big Meadows Campground via the Story of the Forest Trail. We felt pretty good about getting our exercise for the day with this hike.

After dinner we walked up to the nearby Big Meadows Lodge because we’d heard it had a taproom. We ordered a beer and found rocking chairs in front of the large picture window to admire the view. As the sun set behind silver-lined clouds, we spoke at length with a middle-aged guy staying at the lodge for a night while on his trek along a 55-mile stretch of the Appalachian Trail. He had done the full 2,000+ miles many years before, he told us, when he had a much younger man’s body (a big advantage) but also a younger man’s bank account (a big disadvantage). After hearing his stories, we no longer felt like we had gotten enough exercise for the day.

We got up early the next morning to hike the Mill Prong-Laurel Prong-Appalachian Trail loop. It starts out as a wonderful, undulating walk through a beautiful forest full of wildlife and blooming mountain laurel. The highlight of this 7.7-mile hike, however, is the Rapidan Camp historic site.

Here, President Herbert Hoover and his family had a weekend and summer retreat from Washington, D.C. Cleverly nicknamed the Brown House (in contrast to their city dwelling, the White House), the family’s wood-sided cabin was set on a trout stream where Hoover practiced his favorite pastime — fly fishing — and hosted friends and foreign dignitaries alike. A separate building onsite contains an exhibit about the president’s life. We learned interesting trivia, such as the fact that Hoover’s wife, Lou Henry, became the first American woman to earn a geology degree (they met while both studying geology at Stanford University). The family donated their property to the federal government when Hoover’s term ended in 1933. This loop was one of our favorite hikes, even though every walk in Shenandoah offers something special.

Our friends Marci and John joined us for a few days of camping during our Shenandoah stay, and fortunately we had perfect early June weather the entire time. Together we explored another hiking trail that connects to the Big Meadows Campground, making this a great base for hikers in the Central District of the park. The Lewis Falls Trail led to an 81-foot waterfall, and because Marci and John had wanted to see bears, we connected to the Story of the Forest Trail where we had seen them two days before. We soon encountered one bear grubbing around for food a short distance away from the trail. Continuing back to camp, we saw three more off in the woods. So far a four-bear day — and all before lunch!

In the afternoon we hiked the short but stunning Bearfence Trail that came highly recommended from a park volunteer. A brief scramble to a jagged rock outcropping afforded views of the sea of broccoli that was the forest below on both sides of Skyline Drive. Marci snapped a photo of Hector, John and me that, if we were some cool rock band, we could use on our next album cover. It was the perfect way to cap a fun day on our feet.

The next day the four of us went to the South River Falls Circuit, a 4.4-mile loop that descended to the base of the park’s third-tallest waterfall, which drops 83 feet. The temperature dropped as we reached the pool below the falls, a most refreshing break from the warmth of the day. When the sun hit the cascade, the bright white of the falling water was lovely to behold. On our way back up, we passed a mother bear and her two cubs. The cubs seemed oblivious to our presence, but the mother kept an eye on us. Eventually all three crossed the trail downhill from us. Several deer, a large snail, a huge frog, a snake and numerous birds made this one of our best “animals galore” hikes.

Following the hike, Marci and John said their goodbyes and headed home, and Hector and I returned to Big Meadows. Before sunset I convinced him to explore the interior of the meadow to check out wildlife. He reluctantly agreed and we saw nearly two dozen deer. However, I could not convince him to join me for the evening ranger talk in the campground’s amphitheater. He missed out on some cool insights into the park’s nocturnal creatures. The ranger told us, for example, that a skunk can spray six to 10 feet, the gray fox is the only canine that can climb a tree, and baby opossums are about the size of a bumblebee when they’re born. How could you not want to spend an hour learning such fun nature facts? 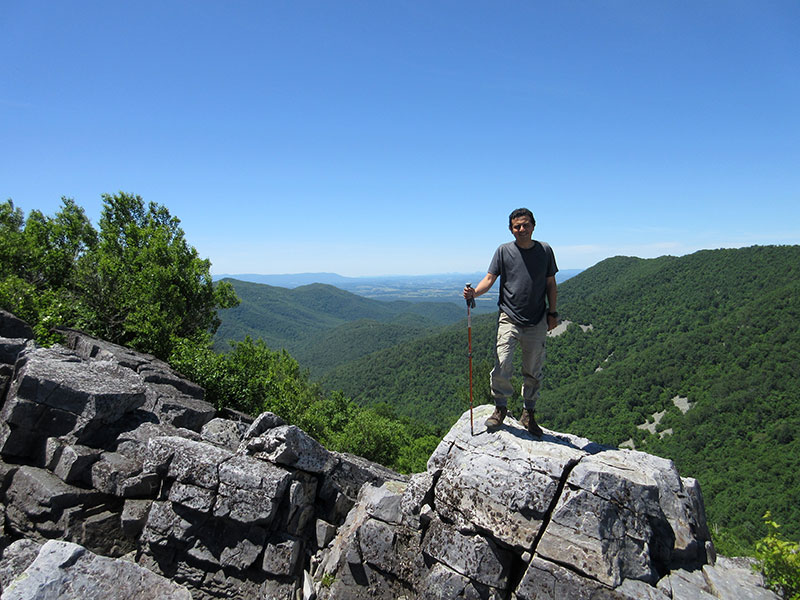 On our final day in the park, Hector and I packed up and headed south on Skyline Drive to the Blackrock Summit Trail. This being a Monday, the park was quieter and the air was very clear. The trail offered great views to the west from a vantage point in a large boulder field that jutted out from the forest. It was a nice way to say farewell to Shenandoah and just the right length of a hike to keep us moving toward our next destination, Bluestone National Scenic River in West Virginia.

7 thoughts on “Camping with Bears in Shenandoah”