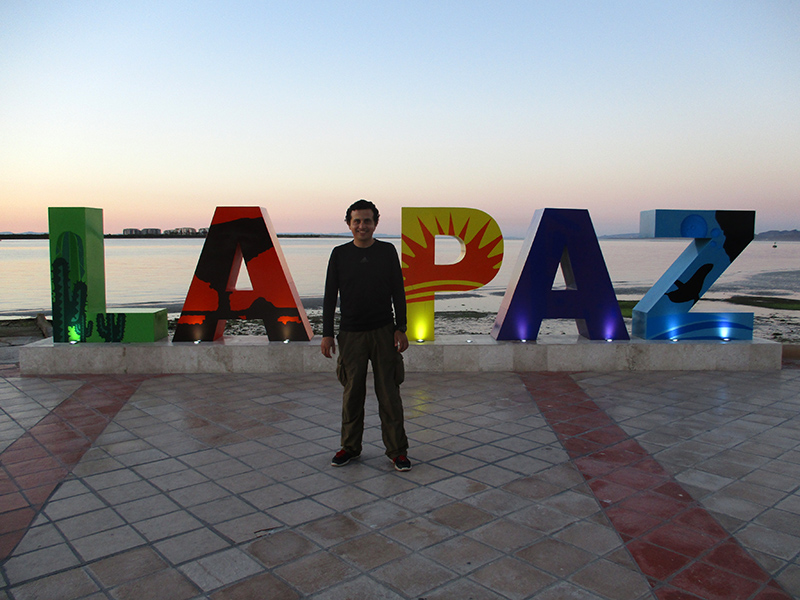 Leaving Loreto behind, we headed south on Highway 1 for the five-hour drive to La Paz, whose name means “the peace” in Spanish. The highway veered from the coast toward the center of the peninsula, climbing and descending numerous mountain passes on the way before it headed back toward the Gulf of California. We saw several dead cows on the side of the road — livestock crossing the road at night pose a major risk almost anywhere in rural Mexico both to drivers and to themselves — and as we wound our way down the last mountain pass with La Paz Bay coming into view, several burros crossed the road in front of us, serving as a reminder that superb vistas are mostly for passengers to enjoy. 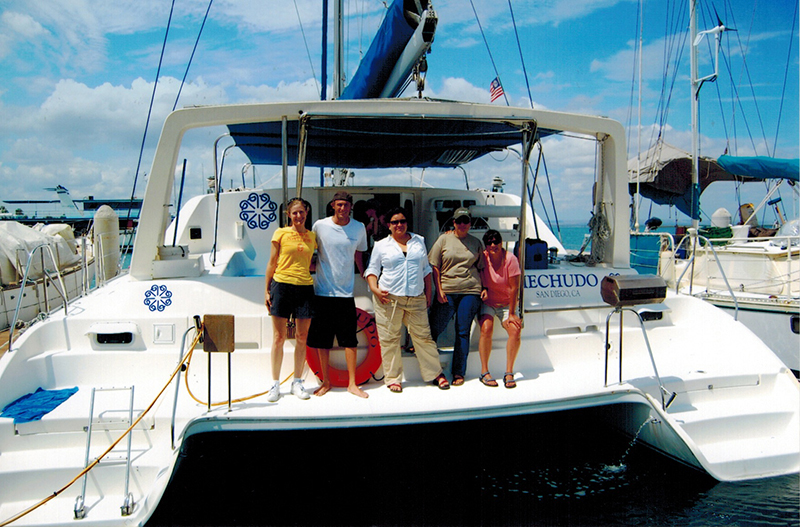 I had been to La Paz back in 2009 while working for The Nature Conservancy in Mexico but spent most of that trip on a catamaran sailing out to several nearby islands that are part of Espíritu Santo Archipelago National Marine Park. The park’s isolation, flora and fauna, and contrast of desert island and marine habitat make it highly valuable as a protected area. My visit this time with Hector was entirely land-based, but I still feel that I haven’t even scratched the surface of this clean, attractive, and downright peaceful city. 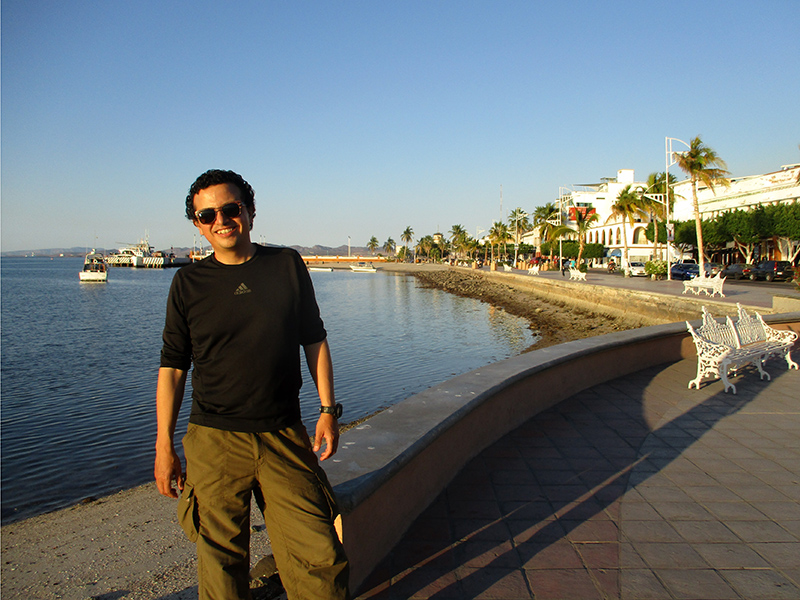 We checked into Hotel One, a business class hotel with modern décor, tasteful amenities and an incredible breakfast buffet — a step above our usual accommodations — as well as a view of the bay and good location within walking distance of malecón and tourist area. We had a late lunch at a little comida corrida restaurant (where they serve highly economical, multi-course meals from a limited daily menu) in the neighborhood and then headed down to the beach. 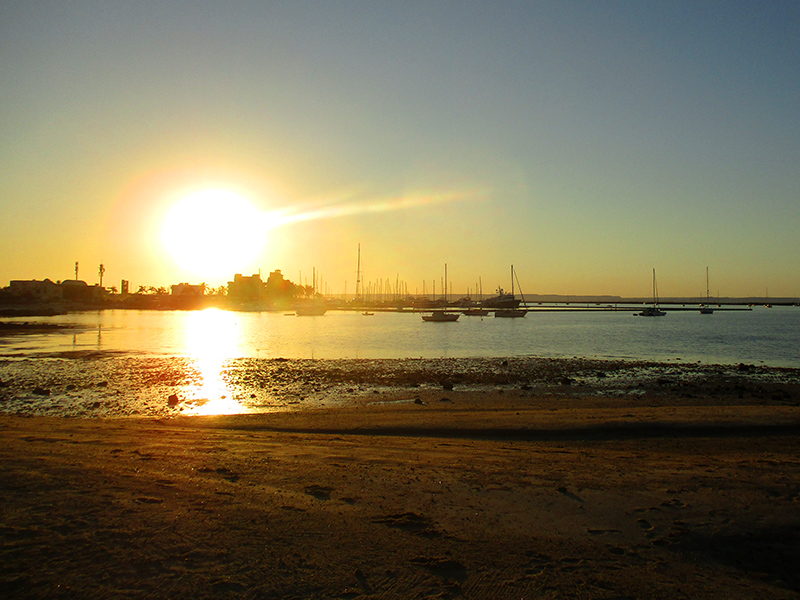 The beach was chock full of tiny shells, and at low tide the mudflats stretched quite a way out into the bay, inviting locals with buckets to venture far out hunting for mollusks and other delicacies from the sea. Families with children searched for tiny treasures washed ashore or exposed in small tide pools, teenagers kicked soccer balls around and played Frisbee, elderly couples strolled hand-in-hand, and everyone enjoyed the fine, late-afternoon December weather. 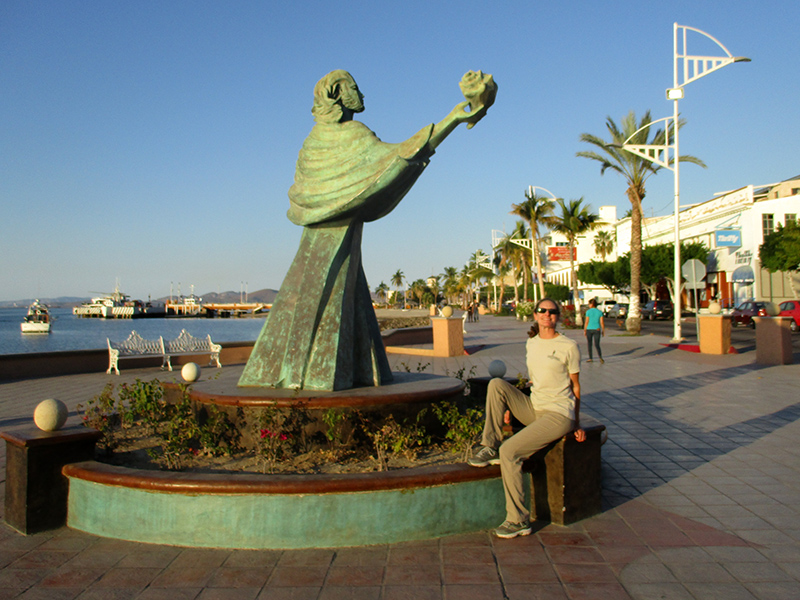 We walked for nearly two miles along the wide concrete boardwalk of the malecon, which has ample room for pedestrians, cyclists, skateboarders and joggers to appreciate the sea views and an array of strategically placed sculptures. Some of the more iconic public art includes Jesus and the Seashell (above), Old Man and the Sea (below), and a giant clam with a shiny silver pearl. 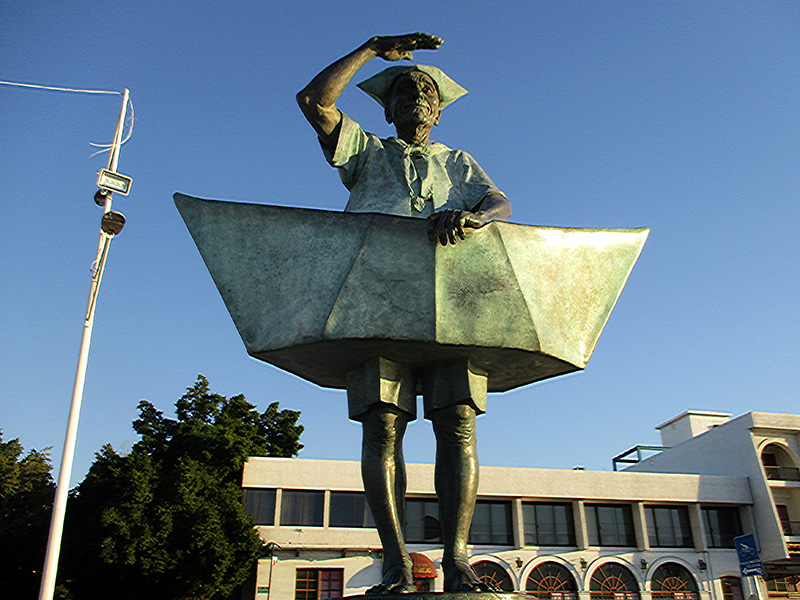 Opposite the malecon, restaurants, bars and sidewalk cafés line the street for many blocks, lending a vibrant atmosphere to the city center. Even so, as the state capital and the point of arrival for ferries from Mazatlán and Topolobampo on mainland Mexico — as well as a great deal of cargo destined for areas throughout Baja California Sur — the city felt more workaday than touristy, which is refreshing for a Mexican beach town. 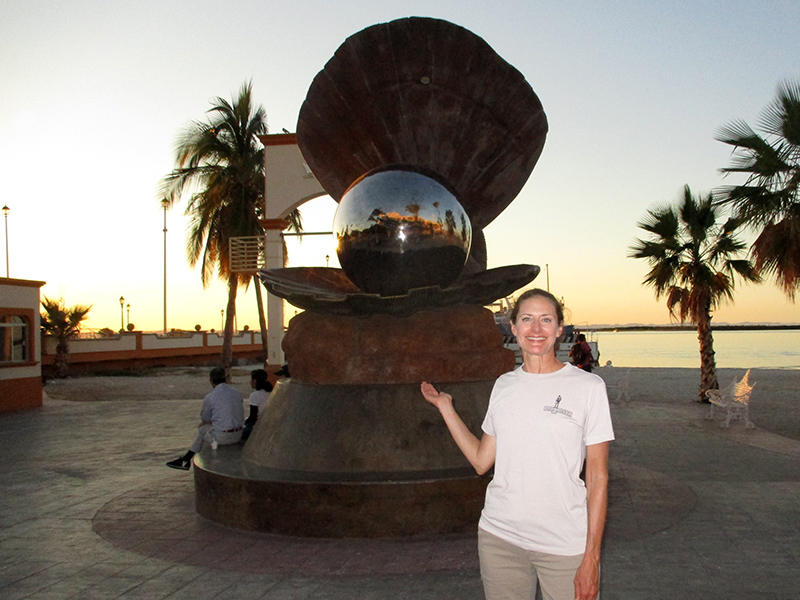 Before leaving town the next day, we met with my local friend Diana for an early lunch at a fantastic open-air seafood restaurant downtown, Mc-Fisher. We thoroughly enjoyed catching up with her while sampling some of the best seafood tacos we’ve ever had.

Back in the car, by the time we managed to find our way out of La Paz for the onward journey south to San José del Cabo at the southern tip of the peninsula, we opted for the shorter route along the Pacific Coast. Initially we had hoped to drive the slow road via Cabo Pulmo (a marine protected area known for its excellent snorkeling and diving) along the gulf coast, but it would have meant a few more hours of travel on an unpaved road and we wanted to arrive with plenty of daylight to spot any wayward cows. Day or night, the last thing you want is to crest a hill or round a bend only to find a 1,000-pound beast staring blankly at you through the windshield, Diana warned us. Thankfully, the rest of the drive was smooth sailing.

Our San José del Cabo segment is next.

2 thoughts on “A Peaceful Time in La Paz”